When I first encountered these fish in a documentary about the deadliest foods, I immediately got enthralled by their fatal charm.

Unfortunately, the ones shown there were saltwater fish, so I hoped there would be another similar freshwater puffer species for my aquarium.

As it turned out there was not just one, but a whole 34 species like the one I had seen. Even though I was filled with joy, I still had to do some research to find which of those would best suit my small 20-gallon tank.

In the end, it turned out 10 of those species would be able to live in my aquarium.

However, only a handful of them could be kept in a community.

Here is what I found.

Blowfish are probably the second most popular type of fish after goldfish.

And it’s no wonder.

Their comical appearance along with their deadly nature leaves an unforgettable first impression. Just ask some of the overconfident people that’ve tried eating them (good luck finding ones).

Anyways, popularity is not the only thing puffer fish share with goldfish.

Just like the latter, most puffers have a high bioload which makes them a nuisance for smaller aquariums.

However, there are some exceptions to this.

Take a look at these 10 freshwater puffer fish species for a small aquarium: 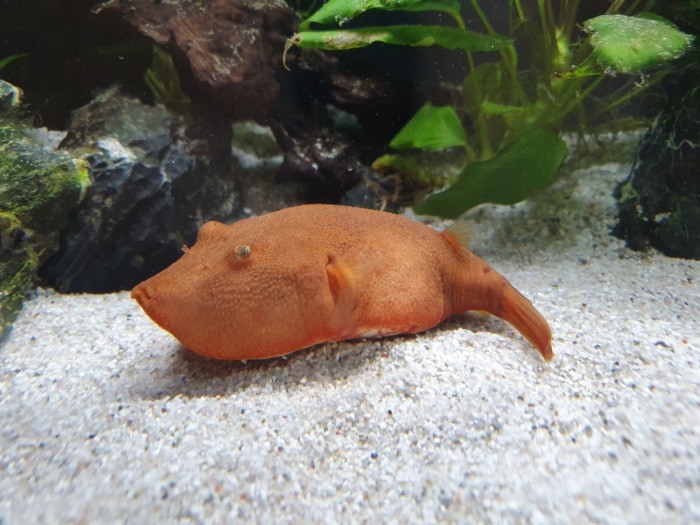 The Congo Puffer from the Tetraodon genus is also referred to as a Potato Puffer and it’s not hard to see why.

Found in large rivers in the Democratic Republic of Congo, this african puffer fish is a devious predator that likes to bury itself in the sand in anticipation of prey.

Its otherwise silly appearance, helps it blend in with the surroundings and ambush unsuspecting prawns and lancefish.

Interestingly enough, Congo Puffers have the ability to change their colors depending on the mood.

You might notice them shifting to dark orange or brown when they’re feeling down.

This shouldn’t worry you, as it’s nothing more than their temperament at play.

Unfortunately, the ill manners of the Congo Puffer carry over to home aquariums which makes it unsuitable for community tanks. If you’re still keen on getting one, then you should keep in mind this freshwater puffer reaches a maximum body size of 6 inches and needs at least 20 gallons of swimming space. 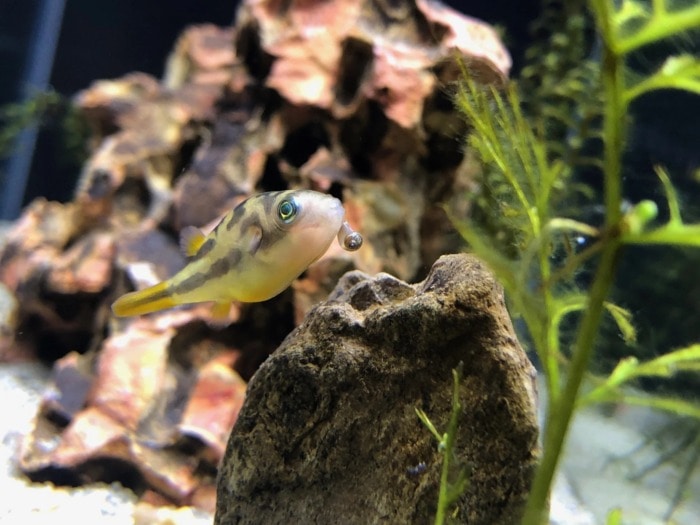 The Malabar Puffer (Carinotetraodon travancoricus) is a curious tiny fish that can be surprisingly aggressive. Even though they have a maximum size of just 1.5 inches, these miniature puffers will stop at nothing to protect their territory.

This includes pestering fish and invertebrates that are larger than them.

When these freshwater blowfish feel intimidated, they try to deal with the threat by puffing up.

Unfortunately, their belligerence makes them unsuitable for community aquariums.

Also known as pea puffers, these fish thrive on a diet of snails and blackworms, but will occasionally snack on vegetables as well. Unlike their larger cousins who prefer their snails crunchy, pea puffers just suck them out of their shell.

You should keep in mind these puffers might try to appeal to your soft side and nudge you into giving them more food.

Why is this important? Well, giving in to their pleas could easily lead to overfeeding which might cause you a lot of headaches further on.

They are often cited as the smallest freshwater puffer fish species, but as you’ll soon find out that’s not the case. 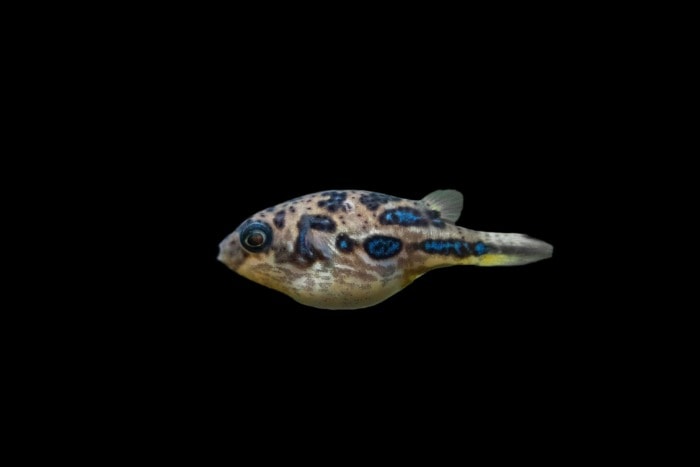 The Carinotetraodon imitator was long thought to be the same species as the Malabar puffer until scientists discovered it had a slightly different color pattern and spinal structure.

As it later turned out, those weren’t the only morphological features that set these species apart.

Unlike its previously believed congener, it was found out that the Imitator Puffer changes its color during courtship.

As a result of these variations, the Imitator puffer was classified as a different species. Another interesting fact about Imitator Puffers is that they grow up to just 1 inch (26 mm) which makes them the smallest freshwater puffer species.

Imitator Puffers don’t require much space and can easily be kept in a small 10-gallon tank. 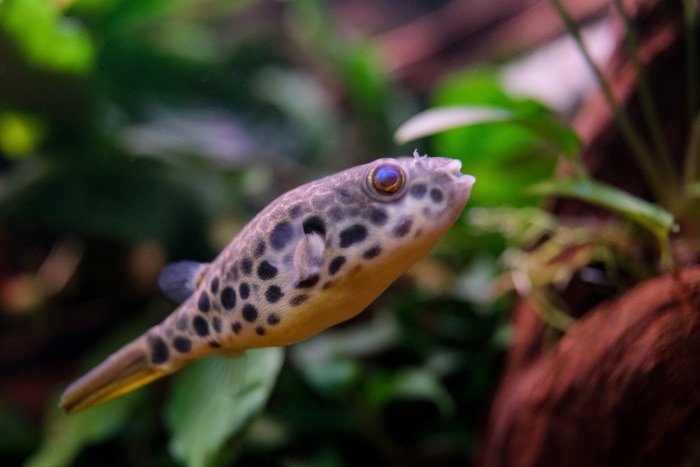 In the past, the Tetraodon Schoutedeni was one of the most popular types of puffer fish, but it nearly disappeared because of the civil wars in Congo.

During this time, most Spotted Congo Puffers in the aquarium trade were live caught and imported.

Fortunately, there were still a number of breeders that managed to conserve them and meet the demand of fishkeepers around the world.

In the wild, Spotted Congo Puffers inhabit fast-flowing waters with abundant vegetation. You can replicate their natural environment by creating a densely planted nano tank with lots of hiding spots.

I recommend adding hardy plants such as Amazon Sword, Java Fern, and Anubias as these puffers like to munch on plants and will decimate ones with thin leaves. Spotted Congo Puffers are one of the few pet puffer fish species that are suitable for a community tank.

However, the only fish species that you can keep them with are Congo Tetras.

Congo Tetras have a peaceful nature and can easily outswim the Spotted Congo Puffer if there’s ever such a need. 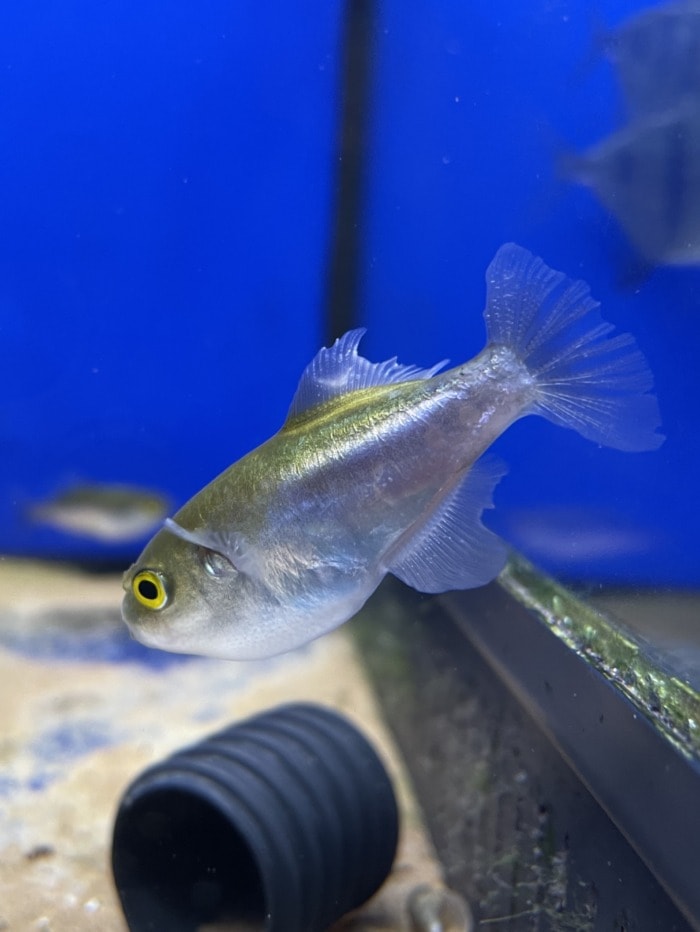 The Avocado Puffer also known as the Golden Puffer from the Auriglobus genus is one of the rarer species of puffers.

It has a tiny, streamlined body that helps it swim in rivers with a moderate water current.

The upper part of its body is covered in a shimmering bronze coat that overflows to milky white at the bottom.

Avocado puffers are omnivores that primarily eat shrimp, insects, and tiny aquatic snails. Snails, in particular, are a vital part of their diet as they prevent their teeth from growing.

Without them, their teeth would grow so long that they won’t be able to chew.

If you plan on keeping any other snail-eaters, then it would be a good idea to harvest the snails yourself.

Author’s note: Never place your hands in the aquarium when you feed Avocado puffers. They are extremely aggressive and might try to bite you.

These puffers prefer to be left alone and don’t get along with other species.

Even though they are relatively small, a single specimen requires at least 20 gallons of water due to the amount of waste it produces. 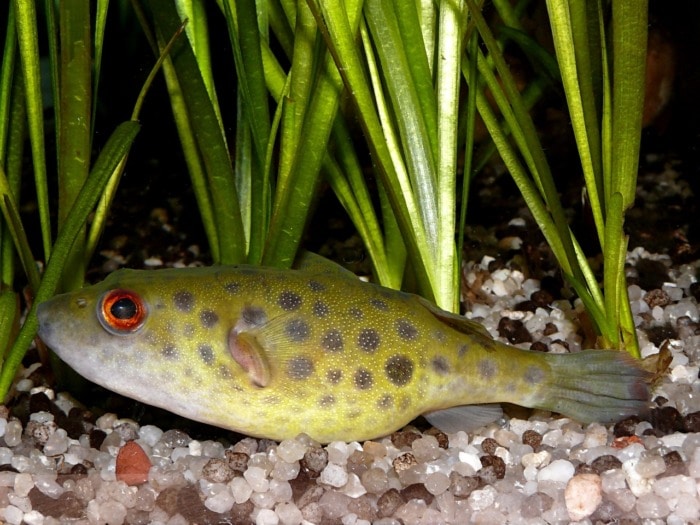 Fang’s Puffer is a mini blowfish that can be found in lakes, ponds, and slow-moving streams in the wild.

It has a pickle green body, marked by a dark spot near the base of its tail.

With a maximum size of just 2.8 inches, Fang’s Puffer is one of the tiniest fish on this list.

Just like the other miniature puffers, its size doesn’t stop it from being extremely hostile. For this reason, it’s best to keep this colorful pet fish in a solitary tank without the presence of other fish, including ones of its own kind.

On the flipside, it has minimal space requirements and can be kept in a 10-gallon tank.

It needs a protein rich diet with an emphasis on shellfish, snails, and worms. 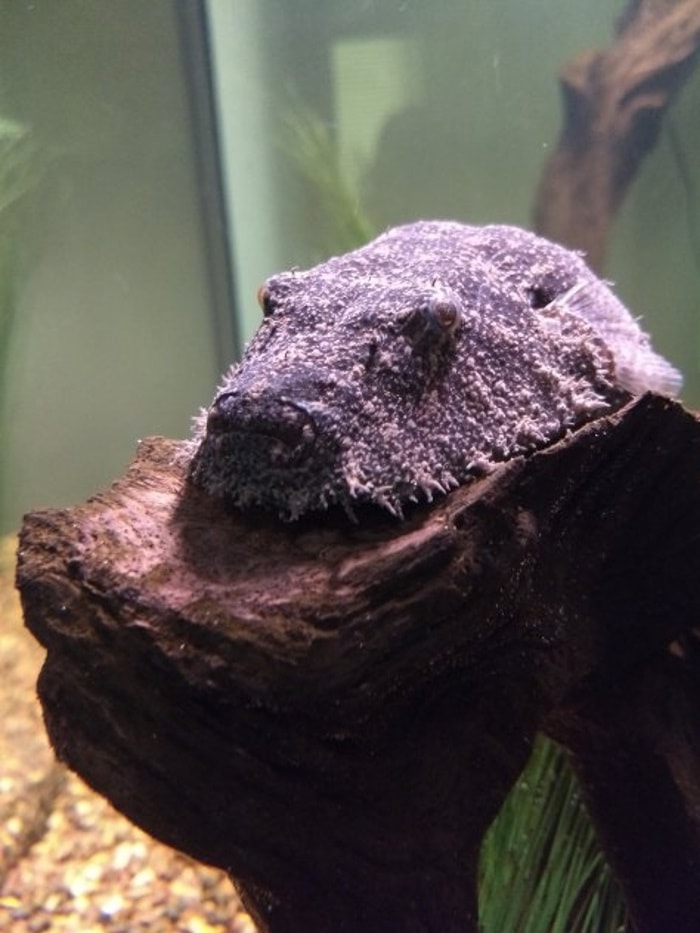 The Hairy Puffer from the Pao genus is an adorable blowfish, endemic to the Mekong river basin.

Its most notable feature are the hair-like epidermal outgrowths called ciri.

Although silly in appearance, these outgrowths play an important role in the hunting tactics of this puffer.

When the Hairy Puffer is out on the hunt, it lodges itself into a crevice and blends in with the surrounding rocks.

This disguise lures in smaller fish and crustaceans who misperceive the flowing ciri as algae.

Anyways, this puffer comes from a natural habitat with fast-flowing, highly oxygenated waters, so it needs to be provided with a medium water flow.

You can achieve this by placing a powerhead near the top of the aquarium.

In terms of food, these hairy little oddballs should be kept on a balanced diet of worms, shrimp, and most importantly shelled invertebrates.

As a final note, I would like to add that the Hairy Puffer is extremely aggressive and shouldn’t be kept with other fish species. 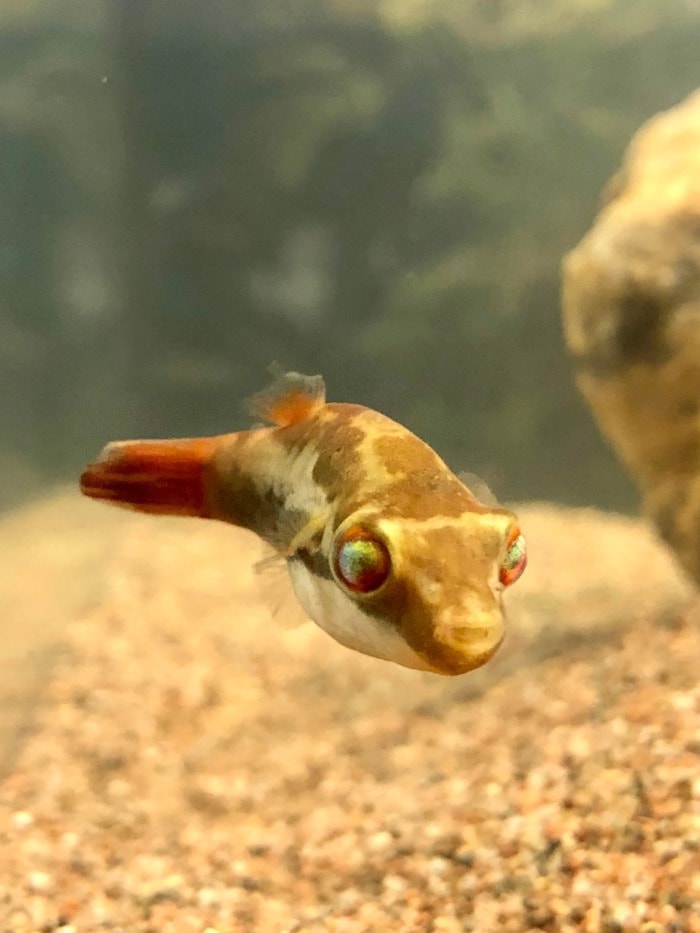 The Red Tailed Dwarf Puffer is a rare type of puffer that’s often sold under the name Red Eyed Puffer.

True Red Tailed Puffers can be distinguished by the bulging shape of their eyes, which isn’t present in the Red Eyed varieties.

Even though they’re territorial, these puffers are one of the best choices for a community tank. The best tank mates for them are fast swimming fish like barbs, tetras, and rasboras.

Red Tailed Dwarf Puffers are petite fish that reach a size of only 2.5 inches when they’re fully grown.

They will enjoy eating mysis shrimp, mosquito larvae, and any hard-shelled foods that will keep their teeth from overgrowing. 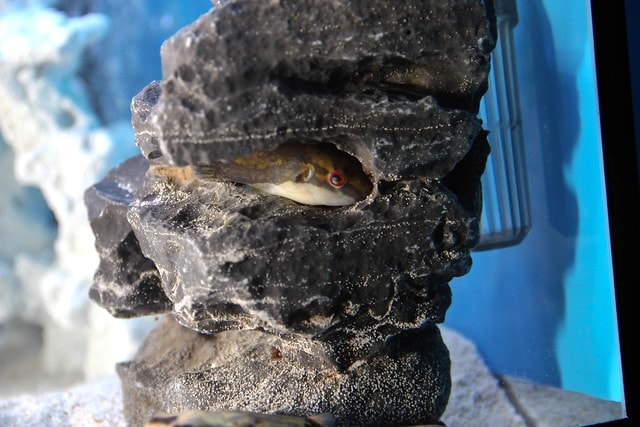 The Crested Puffer (Carinotetraodon lorteti), also known as the Red Eyed Puffer, inhabits the slow-moving waters of the Mekong basin in southeast Asia. It’s usually found in shady areas with dense vegetation, so the addition of floaters, driftwood and other types of plants will make it feel right at home.

Freshwater puffers are generally quite sensitive to changes in the water parameters, and this one is not an exception. If you want to keep your Crested Puffer sound and happy, you should perform regular water changes and keep a close eye on the amounts of ammonia.

Just like most other puffers, the Crested Puffer should be kept on a steady supply of shelled invertebrates to keep its teeth from growing.

These puffers aren’t social butterflies, so it would be best to put them in a single-species tank. 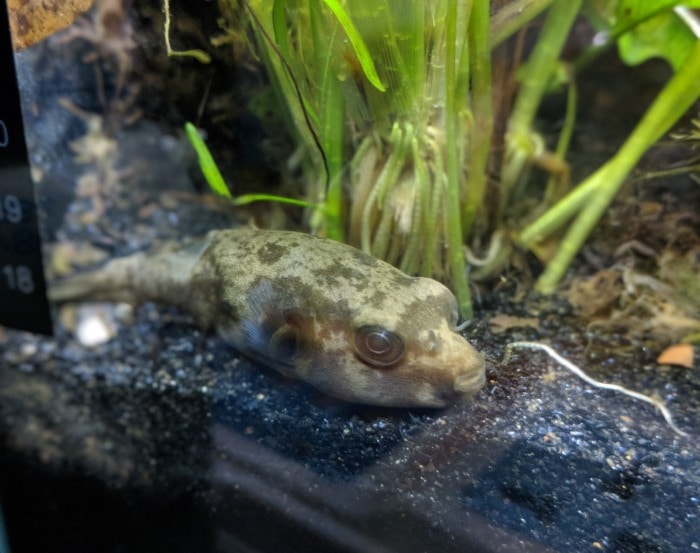 The Ocellated Puffer is the only recognized member of the Leiodon genus.

In the wild, it inhabits ponds, creaks, streams, and other slow-moving bodies of water.

With an adult size of 6 inches, the Ocellated Puffer is the largest puffer fish you can keep in a 15-gallon tank.

Even though the Ocellated Puffer is the first puffer fish to ever be kept in captivity, it’s not the most common one in the aquarium hobby.

Regardless of this, Ocellated puffers are often touted as being the most intelligent of their kind.

In fact, these small puffers can even learn to recognize the face of their owner.

Despite the mental aptitude that some owners might find charming, Ocellated puffers are quite vicious to other fish species.

For this reason, you shouldn’t attempt to keep them in a community tank.

As for food, Ocellated puffers aren’t all that different in their choices than any of the other entries on this list.

They love eating bloodworms, insects, and of course, snails.

If I had to choose one of these freshwater puffer species as my favorite, then I would definitely choose the Hairy Puffer.

Even though these oddballs aren’t socialites, they possess an irresistible charm that I would gladly sacrifice a whole 20-gallon tank for.

What’s the most adorable puffer in your opinion?