Choosing the right aquatic pets for a small aquarium requires much more than simply checking their size.

There are many tiny fish species that seem like a good idea for a 3-gallon tank, but a big part of them aren’t cut out to live in such a tight space.

Some goldfish species, for instance, are relatively small but require at least 20 gallons of free space because of their high bioload.

As you can see, following the one inch of fish per gallon of water rule doesn’t pan out in such cases.

This guide will help you avoid such pitfalls so you can stock your 3-gallon tank without any worries.

How many fish can you put in a 3-gallon tank?

My first experience with a nano aquarium was when I bought a 3-gallon fish tank on a whim. Needless to say, that was a pretty bad idea on my part for many reasons.

First off, a fish tank is not something you buy on impulse.

You need a solid plan that covers all the basics. That’s basics such as:

That latter point is where I failed. I ended up putting more fish than the tank could support.

Luckily, I realized this soon enough and swapped my nano-aquarium for a bigger unit.

Just to be clear, getting a small 3-gallon fish tank isn’t a bad thing. Rather, it simply means that you have to get your fish stocking right so that you don’t overcrowd the tank.

And with that in mind, here’s a good method to figure out how many fish you can keep in a 3-gallon aquarium:

The number of fish you can put in a 3-gallon tank depends on the species you want to keep. Very few types of fish will be small and inactive enough to live in such a confined space. Generally speaking, you can only have 2 male guppies or a single small Betta in a 3-gallon aquarium.

And although goldfish are marketed as fish for small tanks, they are simply not suited to be put in a 3-gallon aquarium. Goldfish grow too large and produce too much waste to fit any tank that holds less than 20 gallons of water.

Author’s note: Many inexperienced fish keepers rely on the “inch of fish length per gallon of water” rule when calculating what can go in their tanks. I’ve also seen different variations of this rule, like the “square inch per gallon” or the “cubic inch per gallon”.

However, all of these rules are widely inaccurate.

See, the body size of a fish does not relate to its lifestyle.

You can cram three 1.3-inch-long Asian Stone Catfishes in a 5-gallon tank and they will do fine because they mostly sit in one place.

However, the 2.2-inch long Zebra Danio is a very active swimmer and needs 30 inches of horizontal tank length, which is basically a 20-gallon “Long” tank. I’m saying “Long” because there’s also a 20-gallon “Tall” tank with different dimensions.

On top of that, some fish need to be kept in groups of their own species because of their complex social hierarchies. These are called schooling fish, because a group of fish is called a “school”.

Having a schooling fish live alone or with fewer members of its species than necessary will result in a stressed and severely shortened life for it.

This automatically excludes putting any tetras, danios, barbs, and any Glofish in small tanks such as the 3-gallon one.

Chili Rasboras, for example, are a type of schooling fish that grow to about 0.8 inches and are fairly docile.

Having 10 of them in a 5-gallon tank is accepted, although somewhat pushing it.

However, you can’t have just 5 Chili Rasboras in a 2.5-gallon because their school won’t be large enough.

So the takeaway here is that you can’t realistically expect to estimate how many fish you can keep in your aquarium unless you’re closely familiar with their species.

But if you already got the tank and can’t swap it for a larger one there are still some exciting stocking options for you.

Stocking a 3-gallon fish tank may seem like a lot of brain work.

And it is, to an extent, because you have to figure out what fish species can fit and feel comfortable in it.

Ideally, you want fish that are small (even in adulthood), less vigorous swimmers, and produce very little waste.

Some particular types of bettas, guppies, and endler’s livebearers fit the bill perfectly.

If you want to deviate from fish, you can look at nerite snails instead.

But if you prefer a bigger population in your nano tank, then consider shrimp in lieu of fish or snails.

You can easily put up to four Amano shrimp, six cherry shrimp, or six ghost shrimp in a 3-gallon tank.

That being said, here are some details about six good stocking ideas for a 3-gallon tank: 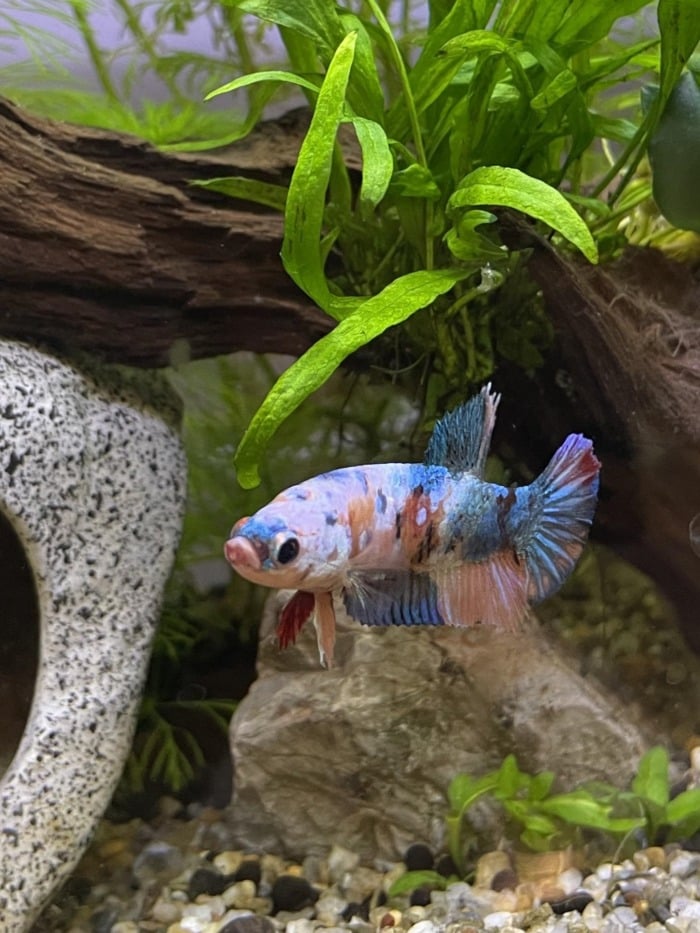 We all love bettas because of their bright colors and long flowing fins.

If you are working with a 3-gallon tank, you will want to keep only one of them.

Bettas grow up to about 2 inches, so having more than one in a 3-gallon aquarium will cause overcrowding.

On that note, a Betta would feel better in a 5-gallon tank.

That said, a betta is, in my opinion, the best fish to have in a freshwater nano tank. Because it’s highly territorial, it doesn’t mind living alone.

Besides, bettas have a normal bioload by fishkeeping standards.

Having said that, you will still need to change the water of their tank regularly.

Just not as frequently as if you had a different species – say a goldfish. 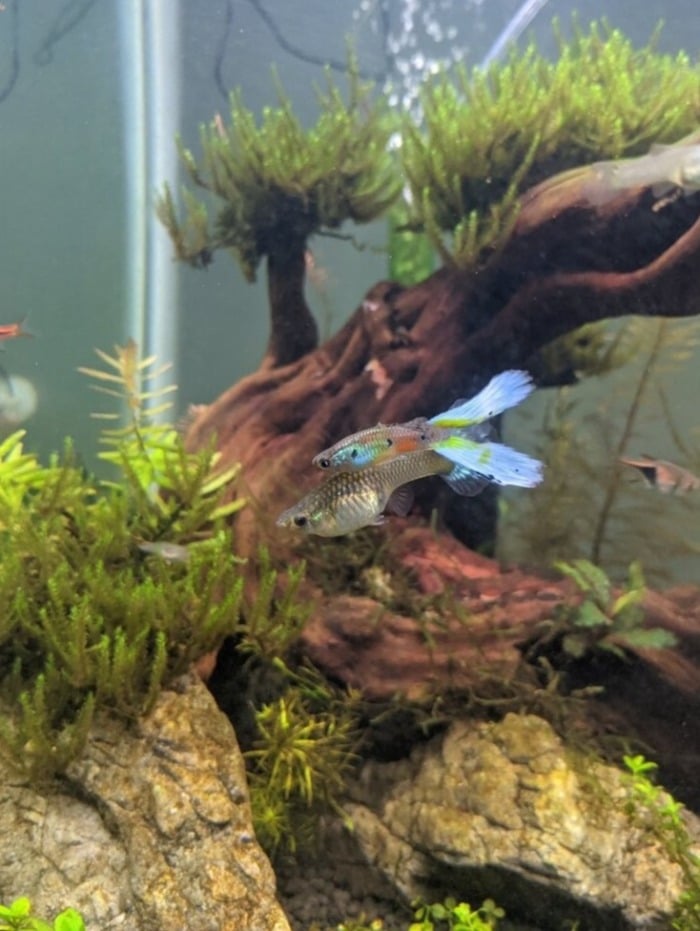 As a fish hobbyist or enthusiast, you probably already know that guppies are among the hardiest nano fish you can get.

They do exceptionally well in seemingly “tricky” conditions like small swimming spaces and slightly alkaline water.

This is why guppies can comfortably live in a 3-gallon tank.

Most guppies won’t grow beyond 1.5 inches.

So, you can put two male guppies in a nano tank that has a 3-gallon capacity.

These fish are peaceful and won’t mind sharing the space.

Having a mating pair in such a small tank will soon result in overstocking.

Endler’s livebearers look a lot like guppies; so much so that many people often confuse the two.

Just like guppies, they are peaceful swimmers that are unlikely to fight over territory in a nano tank.

But they are a bit more active and will typically want to swim at the top half of your fish tank.

If well-cared for, adults can grow to 1.8 inches.

As you can see, putting even two Endler’s livebearers in a 3-gallon tank is already stretching it.

Therefore, make sure the two are of the same sex so that they don’t breed and overcrowd the tank. 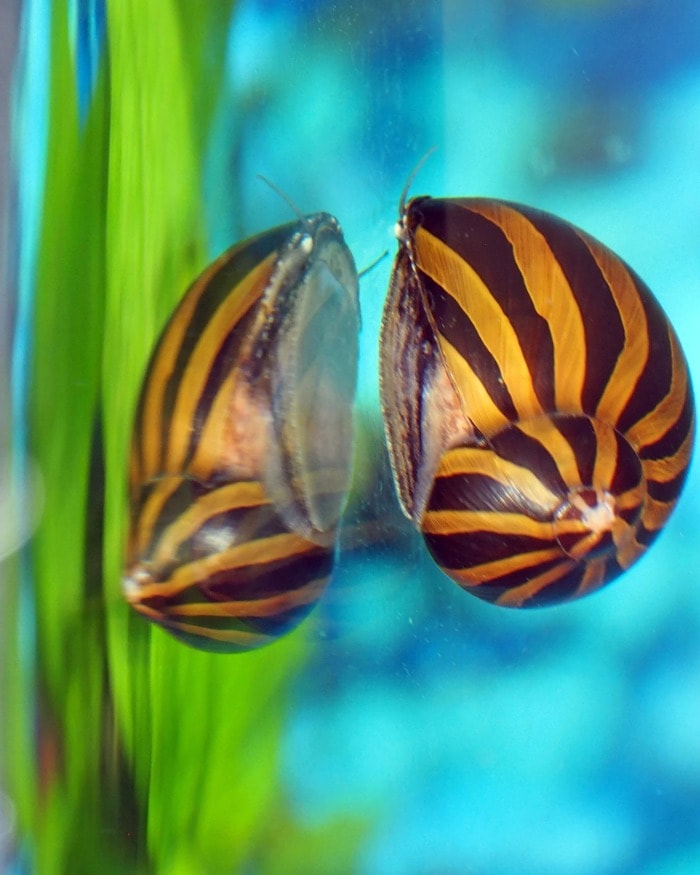 Nerite snails grow to up to an inch and mainly feed on algae and plant matter.

To avoid dirtying the water in your 3-gallon tank too quickly, I recommend putting no more than 1 Nerite snail in there.

Author’s note: If you make to effort to densely plant your nano tank, the aquatic plants can filter the water faster. If your 3-gallon tank looks like an underwater jungle then it can be appropriate to keep 2 Nerite snails in it. 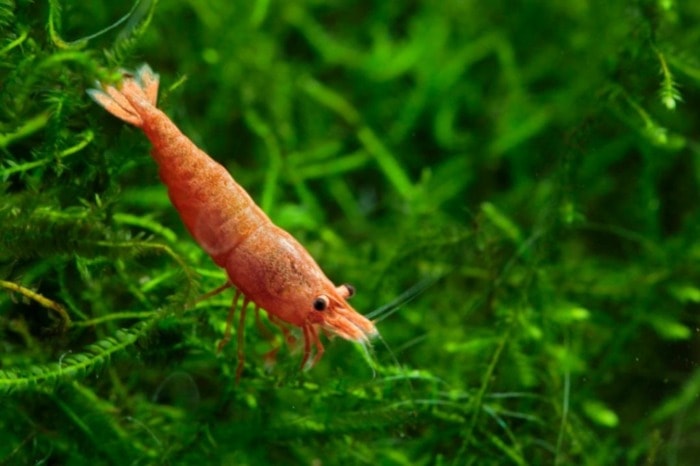 Cherry shrimp are admittedly more exciting to keep in an aquarium than a snail.

A 3-gallon aquarium could accommodate 6 to 8 specimens.

In the case of shrimp, it’s more about available space to forage for food and not so much about waste.

The Cherry shrimp, in particular, is a type of dwarf shrimp that grows to no more than 1.5 inches in adulthood 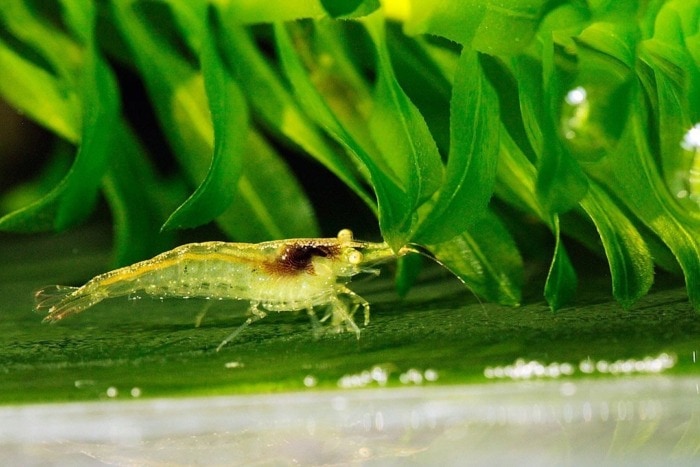 Six to eight Ghost shrimp can easily fit a 3-gallon tank thanks to their low bioload.

It’s a smart move to start with fewer specimens and let them breed to fill in the rest of the space in the tank. 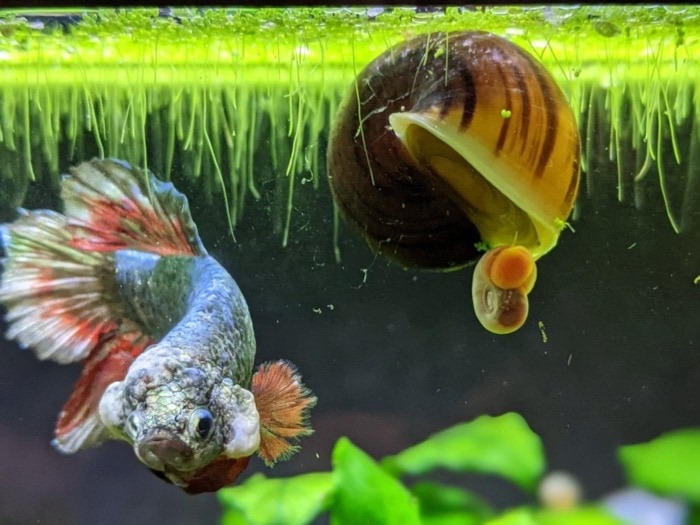 I will be the first to admit that there’s a certain appeal in a minimalist setup.

But when it comes to fish tank size, bigger is always better.

A tank with longer dimensions than a 3-gallon unit will give you more room for décor, plants, and (most importantly) a larger number of fish.

Plus, you can keep varying types of fish in larger tanks.

You won’t be restrained to bettas alone.

In fact, a 5-gallon tank expands your stocking options significantly.

As far as the fish are concerned, more room means more space to swim, play and swirl around freely.

They will be happier and less inclined to fight over territory.

As a bonus, having a bigger tank size provides you with more space for aquascaping.

You can decorate your aquarium more freely and won’t be confined to just nano aquarium plants.

Finally, nasty stuff builds up slower in big fish tanks than in small ones.

As such, you won’t need to change the water that frequently.

For this reason, it’s generally easier to maintain a large aquarium than a small one.

Having a 3-gallon fish tank is not bad at all.

But from my experience, it’s extremely limiting.

You are pretty much restricted to certain freshwater fish that can’t grow beyond two and a half inches as adults.

Plus, you can’t really do much with a tank that small when it comes to décor.

That is why I recommend going for a bigger tank – at least 10 gallons, but ideally 30+ gallons.