If you’ve ever kept shrimp as pets, then you’ve probably noticed they undergo a process known as molting. In layman’s terms, molting means that shrimp basically shed their exterior shell at certain periods in their life cycle.

Even though this is completely normal, some fishkeepers mistakenly believe their shrimp to be dead.

This guide will help you avoid such mistakes in judgment, and let you troubleshoot any possible molt problems with your aquarium shrimp.

Why is Your Aquarium Shrimp Molting?

As a first-time shrimp keeper, I remember seeing what I thought was a dead shrimp lying on the carpet of grass at the bottom of the aquarium.

Upon closer inspection, it looked like my shrimp had exploded and died, with a large opening at the top. 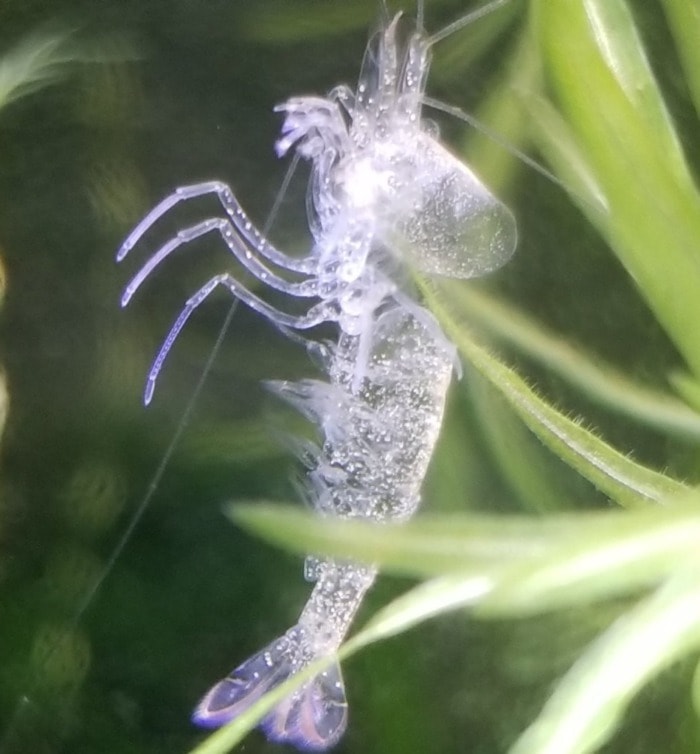 I wondered where I went wrong.

Imagine my surprise when a few days later, I counted my shrimp and had one more than I was expecting!

It turns out, my shrimp hadn’t died – it had molted – and what I’d disposed of was just the leftover exoskeleton after the shrimp finished shedding its skin.

Shrimp molt for all sorts of reasons, but the most important thing to know is that this is a perfectly natural process.

This is why aquarium shrimp molt:

The soft tissues in the body of shrimp are protected by a chitinous exoskeleton. When young shrimp grow, these tissues gradually increase their size until the exoskeleton can no longer contain them. This forces shrimp to molt their exoskeleton which allows their body to continue growing.

How to tell apart molting and dead shrimp?

Generally, speaking, there are some telltale signs a shrimp is preparing to molt.

The most obvious sign is when you notice your shrimp standing still without moving much, or at all. This is what I personally call the “shrimp freeze” and can last for an hour or longer at times.

During the freeze, you may notice slight movements of their antennae or nothing at all. 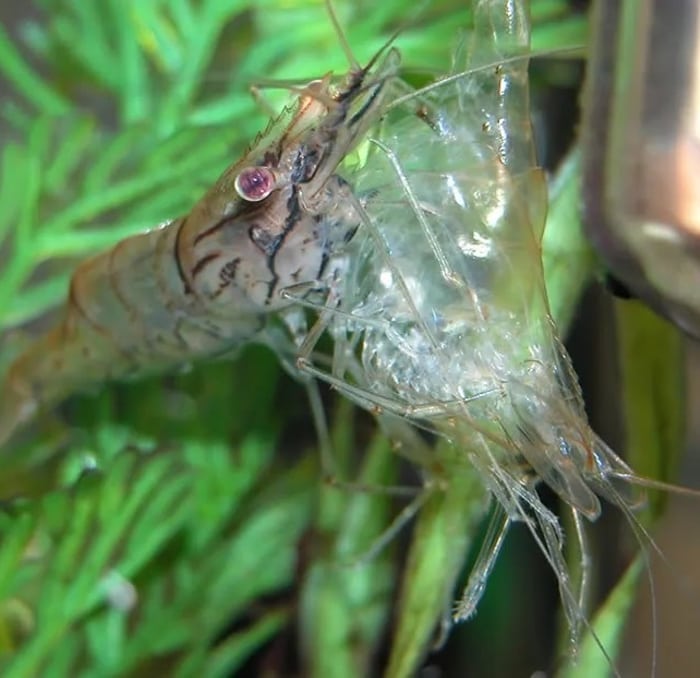 I’ve talked to many new freshwater shrimp keepers who think the motionless shrimp on the bottom of their aquariums are dead or in the middle of dying, but often, this isn’t the case.

There may be shed exoskeletons left behind, or it could be that the motionless shrimp is in the process of molting.

The easiest way to tell if shrimp are molting or dead is by the color. Dead shrimp tend to turn an opaque, milky, or pinkish color, similar to how they look when we buy them from the grocery store.

Shells or molting shrimp will still retain the color of a living aquarium shrimp.

If you’re unsure, leave your shrimp for a day or two.

If the shrimp or shell turns pink after a couple of days, it has died.

Author’s note: If several shrimp in your tank are all behaving listlessly, it may be a sign there’s an issue with the water quality. In such cases, it’s a good idea to do some water testing. If only a couple of shrimp are behaving this way amidst a whole shrimp colony, it’s likely that they’re just preparing to molt.

What are the stages of each molting cycle of aquarium shrimp?

The molting process is a crucial part of the shrimp life cycle, and shrimp that fail to complete this process will likely die.

I’ll talk more about the reasons for problems with molting toward the end of this article.

Let’s first discuss the stages of molting and the molting cycle.

The molting cycle has four distinct stages for shrimp of all kinds.

Shortly after adult females molt, they also release pheromones into the water, telling the males that it’s time to breed.

If you have a large colony of shrimp, you may notice the males swimming around erratically trying to find the female.

Anyway, if your shrimp are molting, it means that they are growing, which is a good sign! If you notice your shrimp molting regularly, it means you’re doing a great job caring for them.

How Often Do Aquarium Shrimp Molt and What Triggers the Process?

All freshwater aquarium shrimp will molt regularly throughout their lifetimes as they consume algae and other foods. 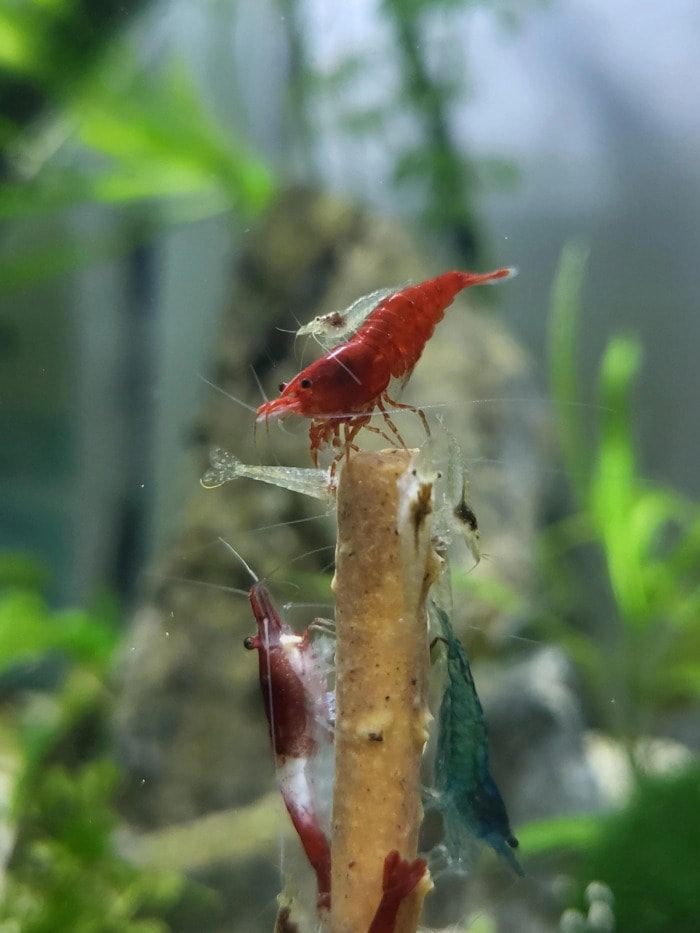 Often, what triggers shrimp molt is growth. Typically, it happens when they have grown too much to fit in their old shells or if they need to regenerate lost limbs.

It is also necessary for their breeding cycles. Shrimp will regularly molt after a period of a few weeks or months depending on the species:

Author’s note: The molting frequencies of freshwater shrimp depend on their sex. Females typically grow slightly faster and larger than males for most shrimp species. For this reason, they will molt more often than the males.

But is molting only triggered by natural growth?

Many seasoned shrimp keepers have noticed that their shrimp will molt shortly after adding the little invertebrates to new tanks or after large water changes. This usually happens when the new water that surrounds the shrimp has fewer particles in it than what the animal was used to.

Without going into too much of the complicated science behind this, the water with fewer particles disrupts what’s known as the osmotic pressure of the shrimp’s soft tissues.

Basically, because of the difference in particle contents, the body of the shrimp starts absorbing the new water too quickly.

This leads to its cells expanding, essentially, like a sponge.

This chain of events immediately sends the shrimp into something like an “emergency” molt.

Its old exoskeleton cannot support the swollen body of the shrimp and needs to be shed.

I’ve come across some articles online that claim the emergency molt is triggered by the difference in water hardness.

This is true to a degree because hard water and soft water have different numbers of particles in them.

But that’s not the whole story.

Nitrate, a common compound found in aquarium water, does not affect water hardness.

However, Nitrate can change the osmotic pressure of water, affecting our aquarium pets. It’s why the emergency molting is usually triggered after a large water change that the shrimp keeper used to remove a significant amount of Nitrate from the aquarium.

Oh, and it’s basically the same with freshwater fish.

So to avoid disrupting the water parameters like that, and spare your shrimp unnatural molts you can do the following:

So technically shrimp do not molt when stressed but when there are abrupt changes in the water parameters of their tank.

Other forms of stress like being harassed or malnourished will not trigger molting.

My experience also confirms this.

If anything, stressed behavior hinders shrimp growth and appetite, both of which are necessary for new molts.

What Are Some Common Molting Problems in Aquarium Shrimp?

Molting problems happen from time to time, sometimes due to issues, you can control, and sometimes just because nature is unforgiving.

Most of these problems stem from two reasons:

Issues with the water parameters or diet.

Sometimes, you may find a shrimp died after molting because it got hurt while vulnerable.

Water parameters that can cause molting problems

The most common reason shrimp fail to molt is due to subpar water parameters.

The two most important parameters to check are the General Hardness (GH) and the Carbonate Hardness (KH) of the water. 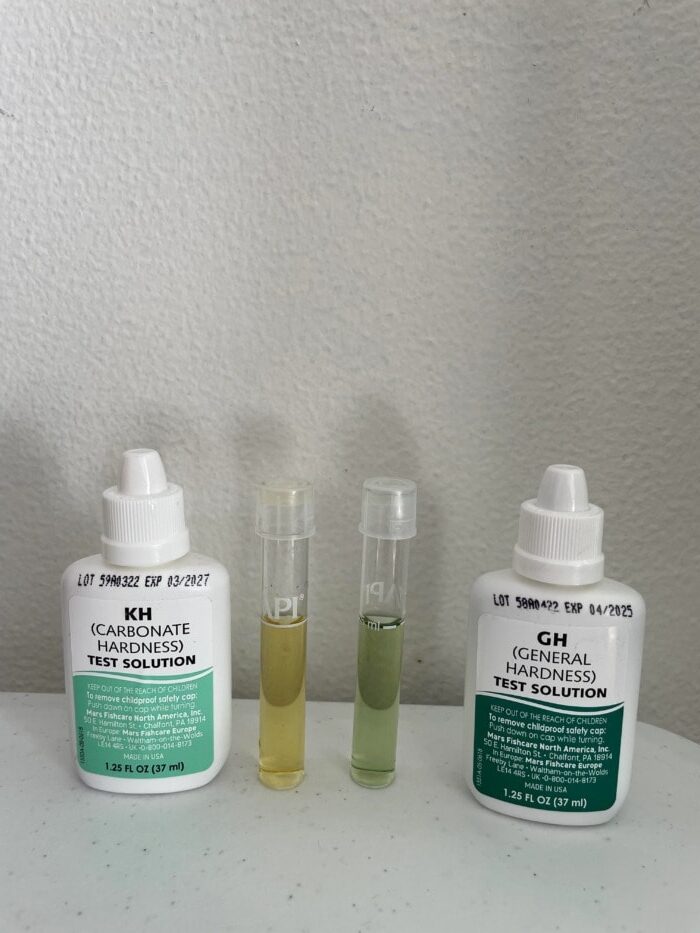 GH primarily measures the level of magnesium and calcium in the water.

Magnesium helps shrimp to absorb calcium carbonate to use for this purpose.

When the GH is too low, shrimp struggle to molt and form a healthy exoskeleton.

Without enough calcium, the shell will be flexible and may not break.

When the GH is too high, shrimp get too much calcium and the exoskeleton becomes too rigid and is harder for them to molt.

This costs more energy during the molting period, which can stress or even kill your shrimp.

Too frequent or infrequent water changes can lead to these levels being off.

One water change per week of no more than 15% of the total water volume should be the absolute maximum frequency unless there is something seriously wrong with other water parameters.

Diet that may lead to issues with proper molting

Another common reason for molting issues can be linked to diet.

When shrimp don’t get a well-rounded, varied diet, they may not get the proper nutritional value to maintain a healthy molting cycle.

Shrimp should have a diet rich in calcium and protein to support their rapid growth.

After your shrimp molts, you can leave the exoskeleton in the water.

Shrimp of all kinds, especially cleaner shrimp, will happily eat the old shells, restoring their calcium levels to help build their new exoskeleton. 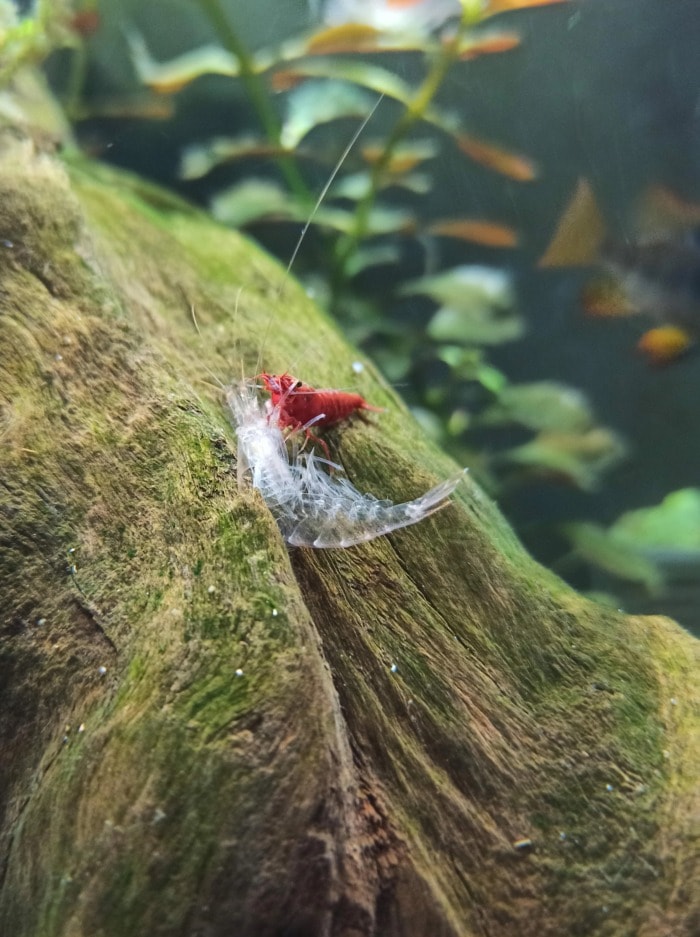 The “White Ring of Death” is a well-known phenomenon among shrimp keepers.

It’s a harbinger of warning that the shrimp will likely not be able to complete the molting process.

It is particularly easy to see on cherry shrimp thanks to the bright color.

A white stripe will be visible between the red shell where bare flesh is exposed. In Amano, the transparent Ghost species, and other less vibrantly colored shrimp, it’s a bit harder to see at a glance. 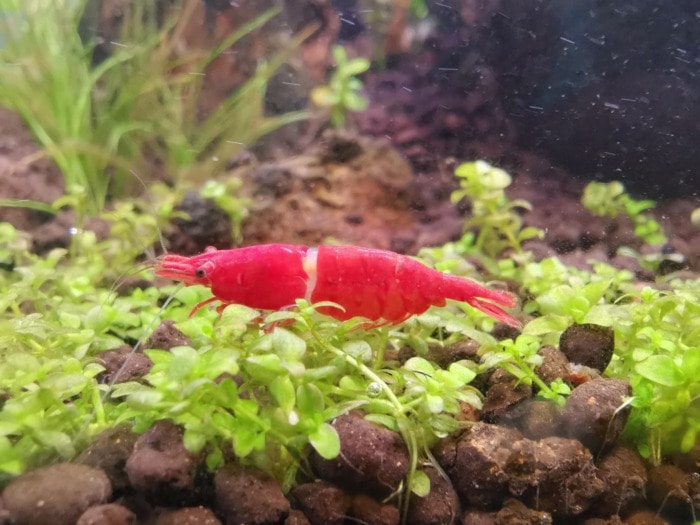 During a regular molt, shrimp split their shells where the top of the carapace meets the abdomen while the bottom stays connected.

The molting shrimp is then able to leave the whole exoskeleton in one piece.

When the White Ring of Death occurs, a complete split forms between the carapace and abdomen segments of the shell.

This means that the shrimp can’t just pop out like it normally would if the shell split at the top.

Most shrimp who have failed to complete the molt die within a day or two.

Shrimp is Stuck in Molt

A shrimp on its side, either motionless or twitching on the substrate may be a shrimp that has gotten stuck in its shell.

Maybe it broke incorrectly, such as when the White Ring of Death presents itself.

Or maybe something else went wrong.

Often, there’s nothing that you can do to help a shrimp struggling to molt.

The shrimp may manage to free itself, or it may not.

If the molt does not complete, the shrimp will die. 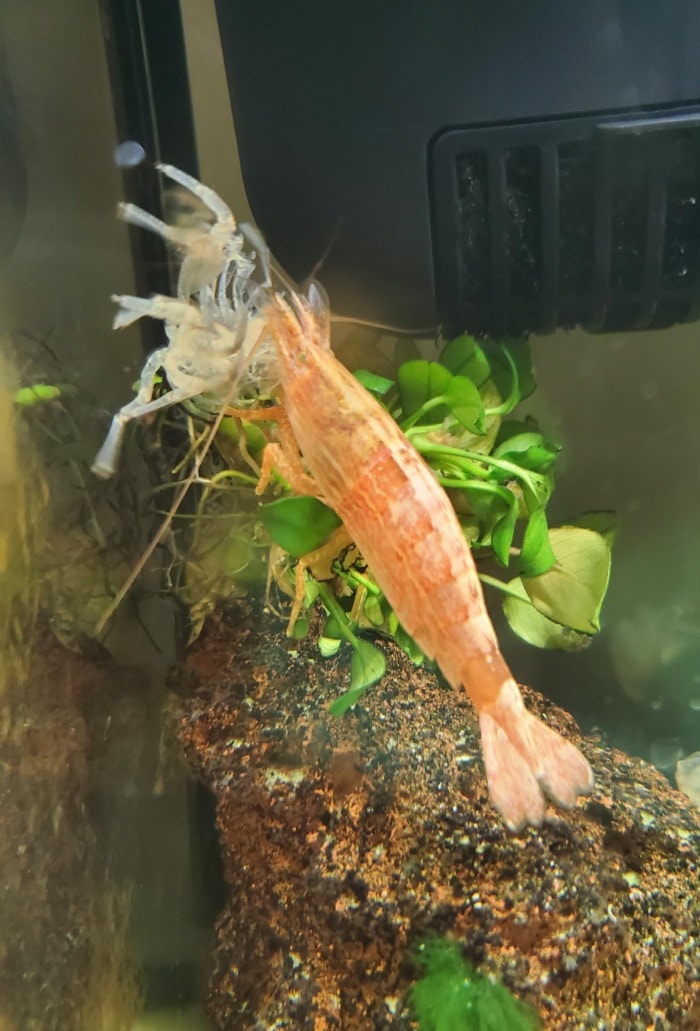 Sometimes, people very carefully use a pair of tweezers to open up the old shell and let the shrimp swim free, but this is very risky.

I don’t recommend this, as shrimp are highly delicate creatures and the risk is too high that you could harm them.

Why is My Shrimp Not Molting?

The most common reason shrimp don’t molt is that the water parameters are subpar.

Test your water parameters and make adjustments as necessary.

If water parameters are optimal, take a look at the diet your shrimp are eating and make sure it is nutritionally complete.

Shrimp are some of my favorite additions to my aquariums since they’re great scavengers that will keep a clean tank, but they’re also very sensitive to their environments. Regular successful molts are a sign that the aquatic environment is within the necessary parameters.

If you notice your shrimp struggling to complete their molts, there’s likely something wrong with the water or the diet provided.