Overestimating the meal sizes of our aquatic pets can seriously impact their well-being.

Because of this, it’s always important to know exactly how much food we need to feed our aquarium fish.

After doing some research, I found a few ways in which you can estimate the right amount of food for your fish and also came up with a feeding schedule that I believe you’ll find useful.

How much food should you feed your aquarium pet fish?

Fish in the wild look for food when they are starving, but they also consume it whenever it is available.

If there are opportunities for it, wild fish will consume food multiple times a day. On the other hand, if food supplies are limited, fish may go without sustenance for days without experiencing any negative effects.

Aquarium fish are no different in this respect and will typically eat anything you put in front of them, even if they don’t need it.

They might act shy the first time you feed them, but will eventually get accustomed to you.

No matter how hungry they may look, you should stand your ground and only feed them what they need.

So here’s how to find the right amount of food you should feed your aquarium fish:

To estimate how much food your pet fish needs, simply put a pinch of fish food in the aquarium water and observe if it gets eaten in the next 3 minutes. In case it does, increase the amount of food in the following feedings until your fish can no longer eat it in the specified timeframe.

If there are any leftovers, you should clean them with a gravel vacuum and reduce the amount of food per feeding session.

As you can see, there isn’t a clear-cut rule about how many flakes or pellets you should feed per fish.

Figuring this out should be a trial and error process since not all fish possess the same size stomach, relative to their body.

Author’s note: Some non-scientific resources claim that a fish’s stomach is the size of its eye. That can be true only for small species of fish such as Bettas (Betta splendens). Larger aquarium fish such as Oscars, for example, have stomachs that are approximately twice the size of their eyeball.

How often should aquarium fish be fed?

The feeding frequency of your fish will depend on their dietary preferences.

Generally speaking, predatory fish don’t need to be fed often and may thrive on one or two daily feedings.

One daily feeding is more than enough for most carnivorous fish because they need between 16 and 24 hours to completely digest their food. However, some owners favor feeding their fish with smaller amounts of food twice a day.

Since I know you’re going to ask – some popular examples of carnivorous freshwater fish in the aquarium hobby are:

On the other hand, herbivorous fish must eat regularly since they don’t have stomachs where they can store food for too long. Instead, their intestines are 4 to 8 times longer than those of a carnivore, on average.

In the wild herbivorous fish spend most of their time eating and foraging for food.

The popular aquarium fish that are primarily herbivorous are:

These species need to be fed in small amounts frequently throughout the day or given live plants or vegetables that they can munch on all the time. Primarily herbivorous fish such as Mbuna cichlids benefit the most from commercial foods like Spirulina.

For the rest of the popular fish in the hobby – you can go ahead and safely assume that they are likely omnivorous. Based on my research and experience, I’d say that it’s a good practice to feed tropical omnivores twice a day.

Additionally, young fish that have not fully developed and freshly hatched fry (baby fish) need to be fed with specific diets made for fry more frequently. 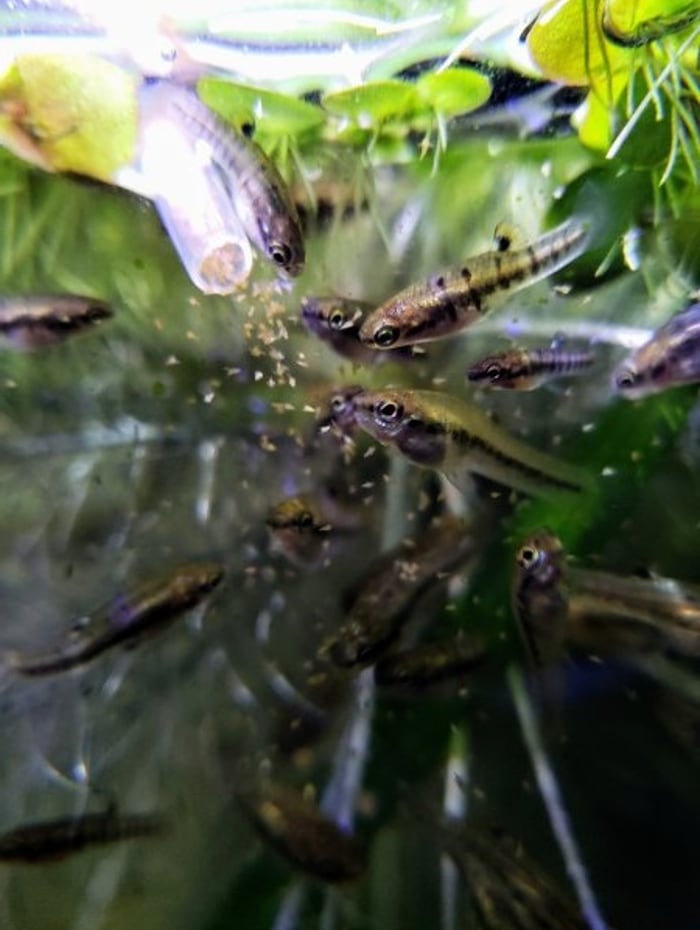 Fry typically require three to four feedings every day but you should go ahead and research what’s the recommended diet for your particular fish babies.

Author’s note: The best time to feed your fish is in the morning or at dusk since most fish in the wild eat during these time frames.

The only exception to this rule is some fish species such as the Pictus Catfish (Pimelodus pictus) which feed at night.

In case you have any nocturnal fish in your aquarium, you shouldn’t forget to feed them before you turn the aquarium’s lights off.

What will happen to your pet fish if you overfeed it? 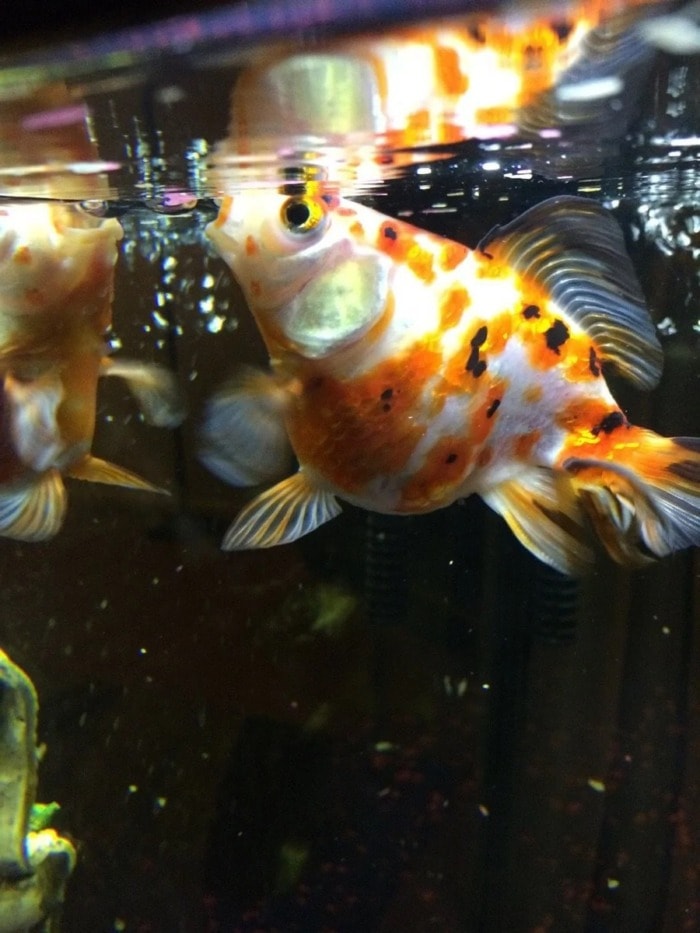 Many aquarists, especially beginners, believe that they can keep feeding fish indefinitely.

This frequently leads to overfeeding, which can seriously impair fish health with time.

This is why they often become a victim of overfeeding and suffer as a result.

The fish health problems that arise in these scenarios are most commonly brought on by the decline in water quality.

However, in some cases, these issues are a direct result of overfeeding.

Here’s what happens when you overfeed your pet fish:

An increase in ammonia and nitrite levels is one of the earliest signs of overfeeding. When you overfeed your fish, they start producing more waste which is released in the form of ammonia in the water.

In addition, if there’s unfinished food left in the fish tank, it will start to decompose at the same time and add to the ammonia and nitrite levels. This is terrible for your fish, and it will also make your aquarium’s biological filter, also known as the “good” bacteria, work harder to make up for it.

If you suspect overfeeding as the culprit behind the ammonia spike in your aquarium, then lowering the amount of food per feeding should resolve your problem.

Related: How To Lower High Ammonia Levels in Your Aquarium

Lack of oxygen in the water is another issue that can arise from overfeeding.

This occurs because unconsumed food and fish excrement consume oxygen when they decompose.

As a result, rotting uses up some of the water’s oxygen.

This may harm aquarium fish as they require the dissolved air in the water to breathe.

If they spend a continuous amount of time in an environment without enough oxygen, they will not be able to breathe and may suffocate. 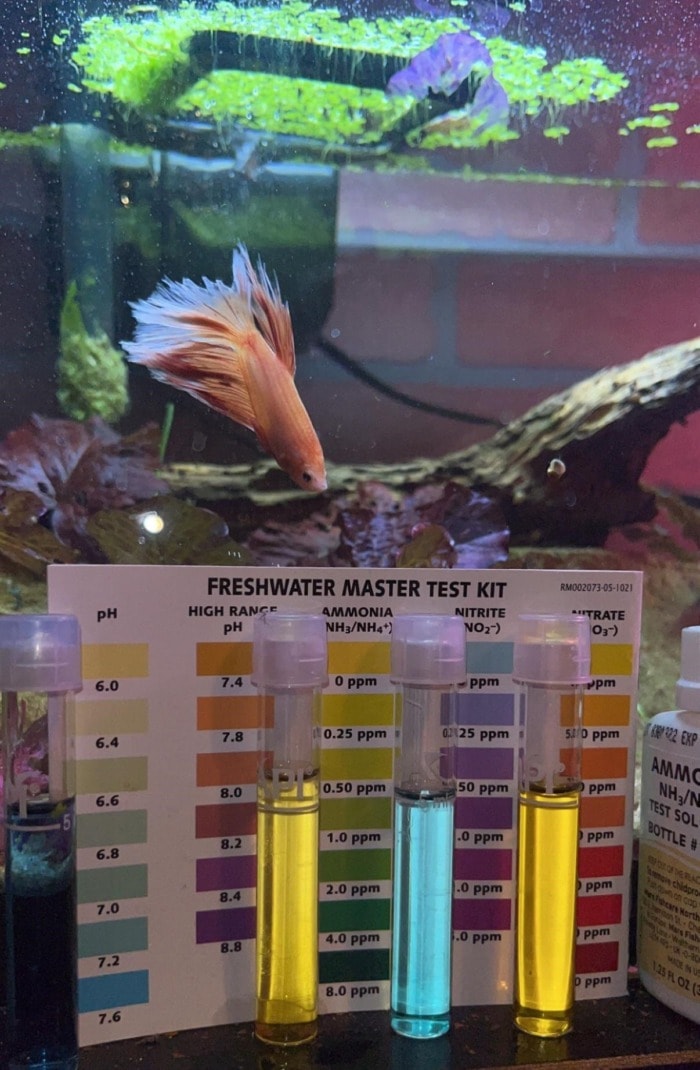 Another consequence of overfeeding your fish is that the pH levels may become low and unstable.

In addition to using up oxygen, the breakdown of fish waste and fish food also creates a lot of ions. In extreme circumstances, this can cause the pH of the water to drop by several points.

If the drop is not that sudden, it shouldn’t cause too much harm to fish that prefer living in reasonably acidic waters, but it won’t sit well with fish that require hard water.

Additionally, it is harmful to many aquarium plants.

Extreme algal blooms are another consequence of overfeeding your fish.

Algae thrive on dissolved organic substances like ammonia, nitrate, and some other nutrients such as Phosphorus.

Thus it is inevitable that there would be a bloom if there are lots of these substances present in the water.

All of these compounds will inevitably be present in greater quantities in the water if your fish are overfed.

Algae blooms are undoubtedly an annoyance because they are unsightly, occupy valuable space, remove nutrients that your aquatic plants require from the water, and also deplete the water’s oxygen levels. Overall, dealing with algal blooms is unpleasant, but they may be avoided in part by avoiding overfeeding your fish. 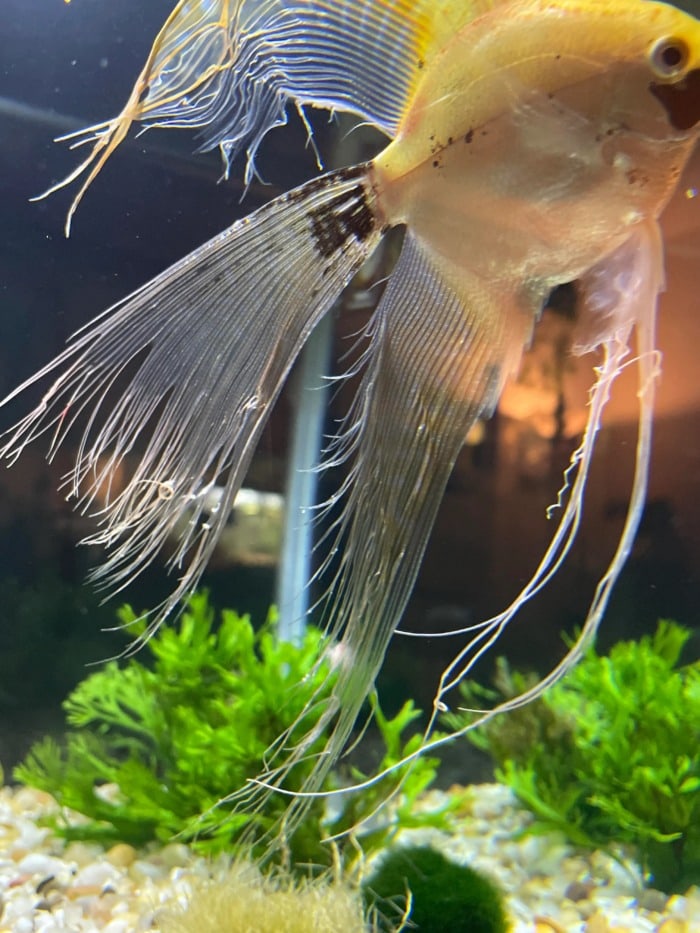 Fin rot is a condition that can be caused by several different factors, one of which is overfeeding.

A fish with fin rot loses the coverings on all of its fins. It can and often does worsen over time, gradually devouring the fish’s entire body.

Though it may be treated if discovered in time, fin rot can be lethal on its own, even without taking into account the additional issues that it causes. One of the contributing factors that can lead to fin rot is stress from subpar water conditions.

Stress lowers the immune response in fish which increases their likelihood of contracting fin rot or other diseases.

Fatty liver disease in fish is caused by the consumption of excessive amounts of carbohydrates and fats.

It leads to a build-up of adipose tissues around the liver which slow its functioning.

This could eventually lead to liver failure and kill your pet fish.

In some cases, fatty liver disease can be caused by a lack of vitamins and nutrients.

Keeping your fish on a varied diet will minimize the risk of a fatty liver.

Carnivorous species like the Oscar fish (Astronotus ocellatus), should be fed with brine shrimp, bloodworms, or other sources of animal protein, and may be supplemented with pellets.

These are relatively cheap foods that can be found in any fish store. 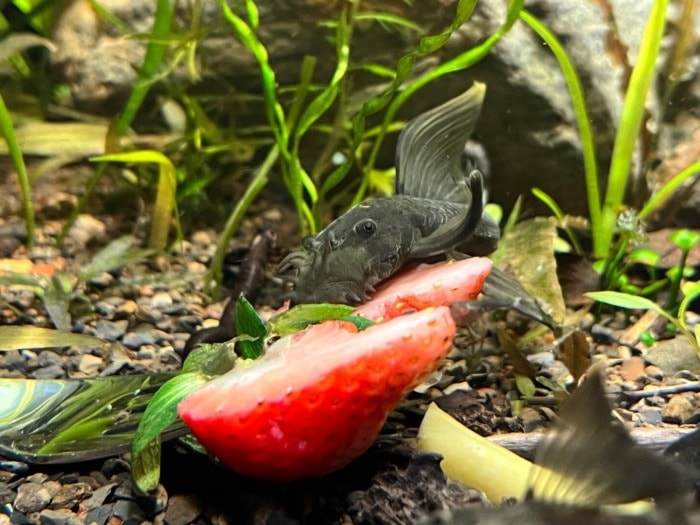 Even though it’s not as serious as some of the other issues, overfeeding your fish might also lead to digestive problems.

These problems might manifest as both diarrhea and constipation, neither of which is ideal for the health of your pet fish.

These conditions lead to improper nutrition absorption, which is not desirable at all.

Your fish must consume enough nutrients to stay healthy, and inadequate nutrient uptake can have detrimental short- and long-term consequences on its health.

As you can see, overfeeding fish can lead to a variety of issues, some of which are immediate while others can have long-term catastrophic effects.

Fortunately, by serving your aquatic pets the appropriate amount of food you can avoid them altogether.