Telling when one of your tiny aquatic pets is about to give birth can be confusing.

Fortunately, fertilized Ghost shrimp eggs can be easily spotted once you have a basic understanding of shrimp anatomy.

In any other case, the following post would’ve probably turned into a detailed account on shrimp reproduction, but the transparent body of these shrimp eliminates the need for this.

Here, you’ll find a simplified, yet complete answer, that won’t force you to look up unnecessary scientific terms like gravid.

Furthermore, I’ll show you some clear, easy-to-spot signs which tell when Ghost shrimp eggs are about to hatch.

How to tell if Ghost shrimp eggs are fertilized?

Before I tell you how to find out whether the eggs of your Ghost shrimp (Palaemonetes paludosus) are fertilized, I will briefly explain what makes female specimens different from their male counterparts. And there’s a reason for this.

The most noticeable physical difference between male and female Ghost shrimp is the size of their body.

Males have slender bodies that typically reach a size of 1.2 inches, whereas females are more rounded in appearance and grow up to 1.5 inches.

While this doesn’t tell us all that much about their reproduction, females possess one key physical feature that’s not easy to spot for beginners.

If you take a close look at this side-by-side comparison, you may notice females have a slight bump just behind their head, called a saddle. 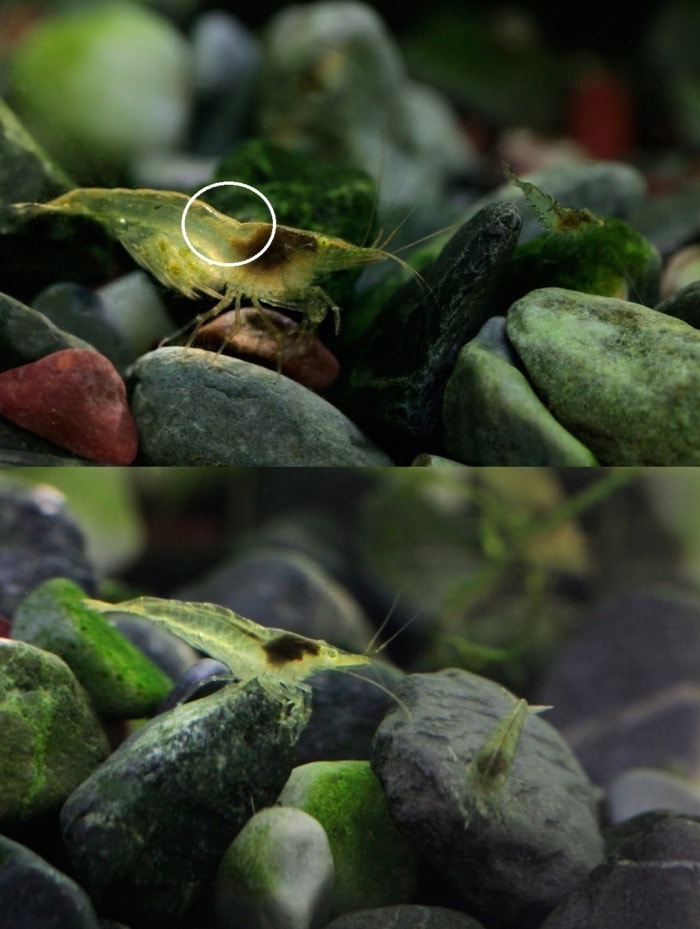 Many fishkeepers mistakenly believe the lower part of the abdomen to be the saddle, which leads to a lot of confusion when trying to identify whether a female is pregnant.

With that being said, here’s how to know if your Ghost shrimp eggs have been fertilized:

Every 30 to 40 days, female Ghost shrimp produce a clutch of unfertilized green eggs that’s stored in their saddle. When the eggs get fertilized by a male, they travel to the lower part of the female’s body where they get attached to her legs. 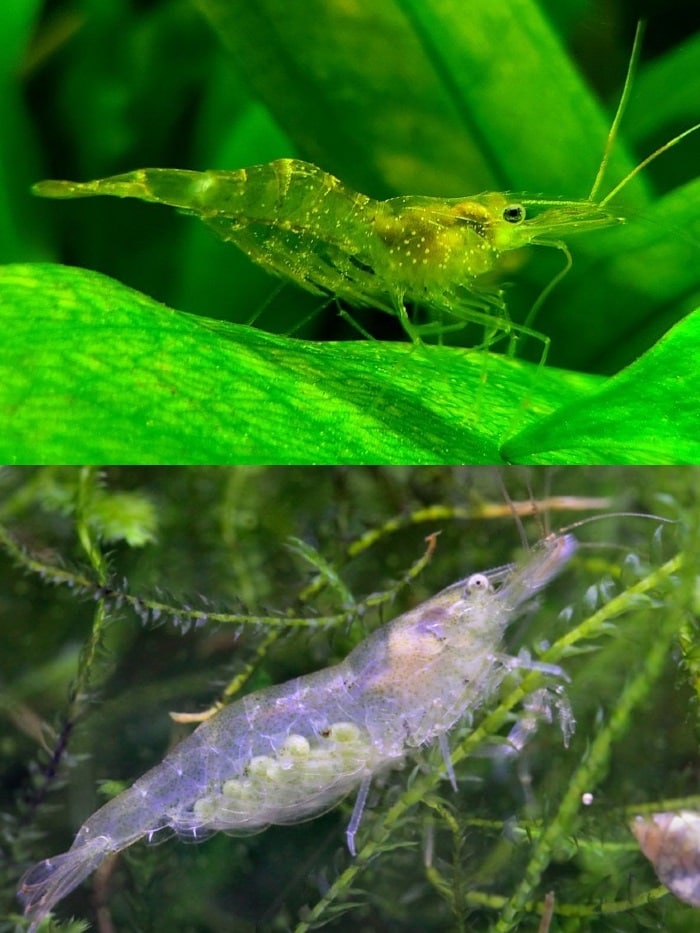 Despite some common myths floating on the internet, the color of the eggs has no relation to fertilization.

Any female Ghost shrimp carrying eggs below her abdomen is considered pregnant or “berried”, regardless of their color.

Berried is another term used to describe a pregnant shrimp.

In most cases, Ghost shrimp eggs look like tiny green balls, but they might also be orange in color. 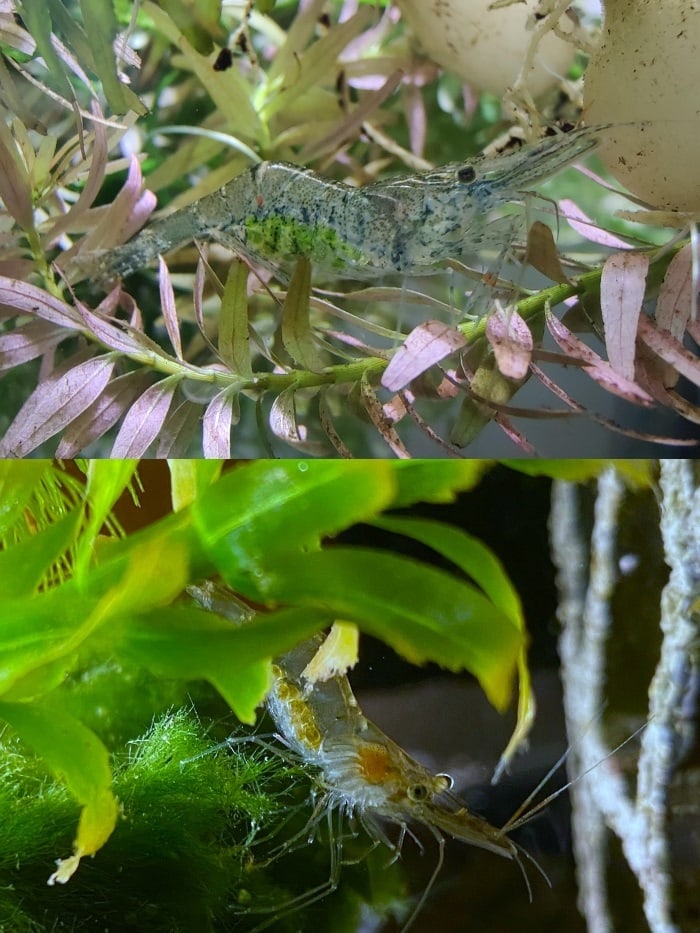 The only time you should be concerned about the color of the eggs is if they turn entirely black.

This usually indicates that they won’t hatch, but there’s nothing you can do to save the offspring.

How long do the eggs of a Ghost shrimp take to hatch?

From there on, pregnant Ghost shrimp go through two main stages.

In the first stage, she produces a fresh clutch of eggs in her saddle and releases a pheromone that draws the attention of male Ghost shrimp.

If a male manages to fertilize her eggs, the female enters a two-week gestation period.

During this time, she will occasionally fan her legs to supply the eggs with sufficient amounts of oxygen.

The first signs of hatching start to appear in the second week. During this time, each egg starts to develop eyes which can be seen as two tiny black specks. 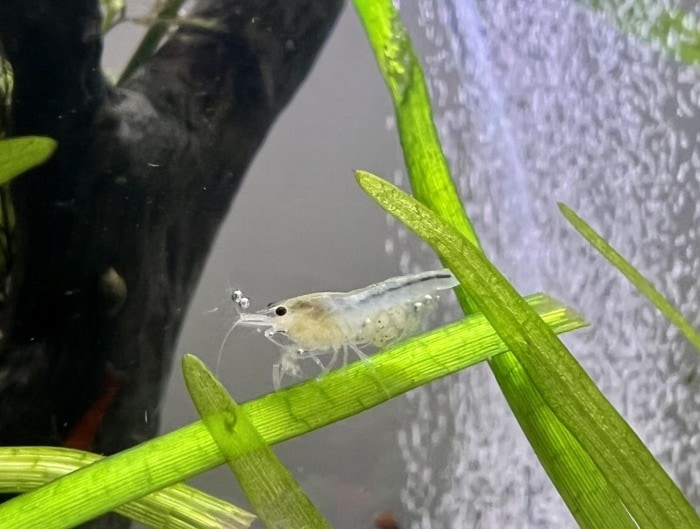 Meanwhile, the mother also starts to flick the eggs with her legs in an attempt to drop the fry.

Here’s a video of a pregnant Ghost shrimp that’s laying her eggs and trying to do just that:

It typically takes about 14 days for the fertilized eggs to hatch. If we take this and add the number of days a female needs to produce a batch of unfertilized eggs, then we can estimate that the entire process lasts between 44 and 54 days.

This means you can expect your Ghost shrimp to breed roughly six times a year.

The eggs have gone missing!

Even though Ghost shrimp typically carry between 20 and 30 eggs, only a small fraction of their babies make it into adulthood.

This usually happens because, while in their larval stage, the shrimplets either get sucked in by the water filter or get eaten by predatory fish.

In these cases, many fish keepers are left confused because the eggs of their Ghost shrimp have suddenly gone missing. If you can’t locate the eggs anymore it is likely that something in your aquarium into a quick meal.

The list of potential predators includes the mother Ghost shrimp.

However, you can increase the chances of survival of your Ghost shrimplets by following some simple precautions.

How to take care of Ghost shrimp babies?

The best way to ensure your baby Ghost shrimp live to see more than just a single day is to move their mother into a separate spawning tank.

This will not only save the newly hatched shrimplets from turning into fish food, but it will also minimize the risk of a miscarriage as a result of stress.

Author’s note: On some rare occasions, female Ghost shrimp might molt during pregnancy and prematurely drop their eggs.

This type of sand will also make the otherwise plain physical features of your Ghost shrimp stand out.

After you’ve covered the spawning tank, you should fill it with dechlorinated water at a temperature between 70 °F and 80 °F with a pH level of roughly 7.0.

By adding an air pump, you will satisfy the high oxygen needs of the newborn shrimp. You can also add some small live plants like java moss to further increase the available oxygen in the water.

As an added benefit, the plants will also serve as food for the baby shrimp. 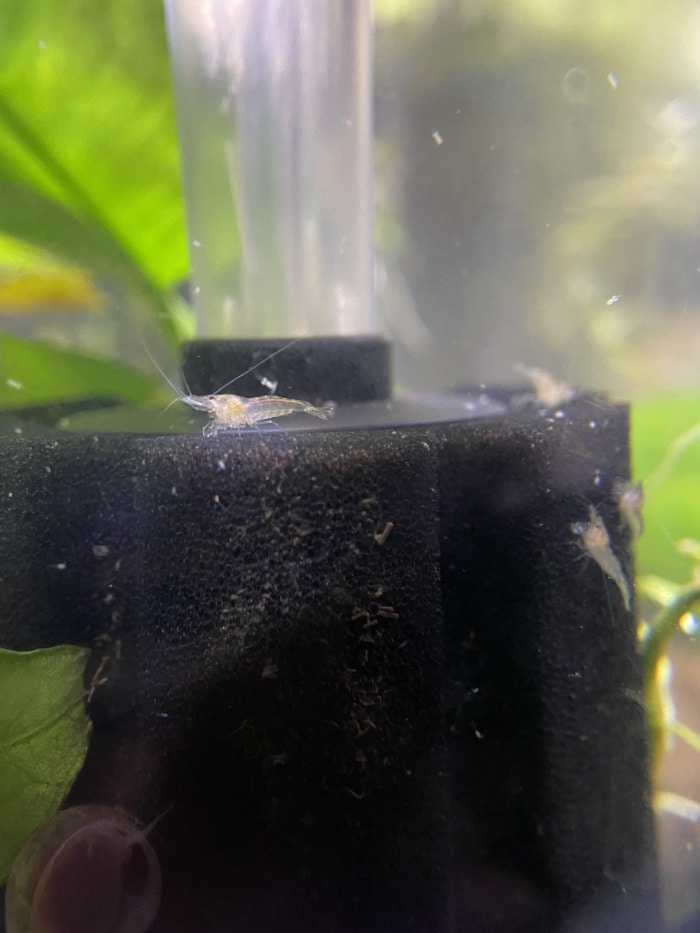 Unlike hang-on and canister filters, sponge filters don’t create a strong water current. This makes them perfect for baby shrimp as they’ll clean the water of debris, without posing a risk to them.

Furthermore, the sponge filter will also help maintain the spawning tank free of ammonia. In case you’re not willing to buy a sponge filter, you can simply perform daily water changes until the newborns are ready to be moved.

If you choose to go down this route, you should replace 10% of the water in the spawning tank with dechlorinated water.

After the mother has finished giving birth, you should immediately remove her from the tank.

If you fail to do so, there’s a high chance she’ll try to eat the baby shrimp.

Ghost shrimp are not like other dwarf shrimp species and will try to feed on their own shrimplets.

Once you’ve done this, you should cover the walls of the spawning tank with paper.

Newborn Ghost shrimp are drawn to light and might injure themselves by bumping into the glass.

Once the baby larvae hatch, they will be barely discernible due to their minuscule size.

You shouldn’t worry if you’re unable to see them at first.

They haven’t disappeared, they’re just too small to see yet.

You should be able to notice them in a few days’ time.

They will look like miniature versions of adult Ghost shrimp, but without legs.

The newborn shrimplets will need at least 1 to 2 weeks before they grow legs and start to resemble actual shrimp.

At the beginning, these tiny transparent creatures will have a hard time eating regular fish food due to the small size of their mouths. As a result, you should feed them with foods that are small enough for them such as infusoria and algae powder.

Alternatively, you can simply grind some fish flakes and sprinkle them into the water.

You shouldn’t worry too much about the feeding frequency as long as there are live plants in the tank.

Furthermore, Ghost shrimp are notorious algae eaters, so there’s a small chance they’ll starve if you feed them once a day.

In five weeks’ time, the newborns should have matured enough to be transferred to your main tank.

Ghost shrimp are great aquatic pets that can be an indispensable part of your aquarium’s cleanup crew.

Noticing their new eggs may seem confusing at first, but as long as you provide them with a proper spawning environment, you should have no trouble.

Hopefully, your aquatic family will have a few new additions in the following weeks.

Feel free to come back and share your experience with newborn baby Ghost shrimp down in the comments.