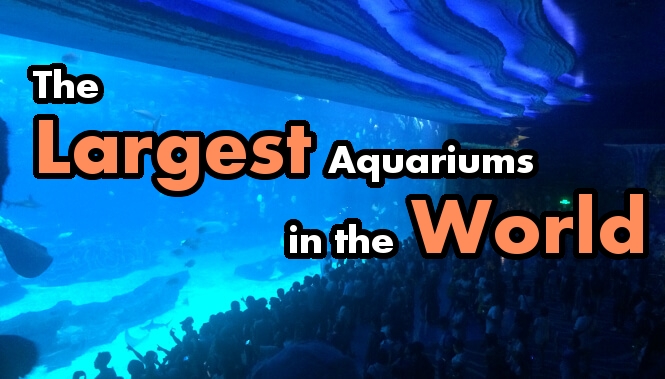 If you’ve personally seen a 300-gallon fish tank up close you know how tiny it makes you feel. However, the dimensions of commercially available fish tanks are nothing compared to the largest public aquariums found around the world.

Tank size does matter in these facilities, as some of them accommodate whale sharks, gigantic fish that may easily reach up to 30 feet in length (9 meters).

Each in the top 13 of the biggest aquariums in the world holds no less than 2,000,000+ gallons or of water, which is 7.5 million liters. Some of them are home to thousands of animal species.

What is the LARGEST Aquarium in the World?

Each of the aquariums listed below is made to keep an enormous number of animal species. For this reason, the water capacity of most of their tanks is in the millions of gallons.

Take a look at the largest aquariums in the world ranked by their gallon capacity: 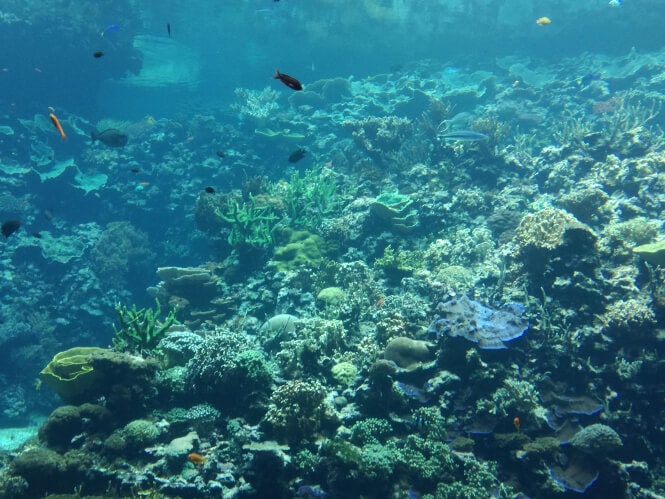 In fact, it is the second-largest coral reef aquarium, right after Australia’s Reef HQ. 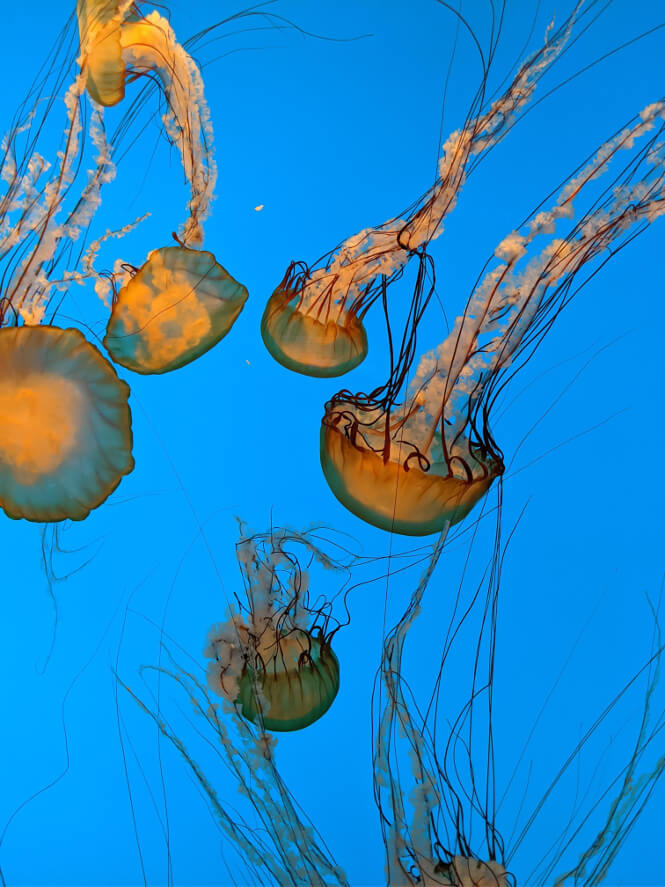 The National Aquarium in Baltimore, Maryland holds an astonishing total water volume of 2,200,000 US gallons.

Its biggest fish tank is half that – nearly 1.3 million gallons.

This beautifully designed facility is popular for its dolphin and stunning-looking jellyfish exhibitions.

The National Baltimore Aquarium houses more than 750 animal species, however, it is nowhere near the largest one in the United States of America.

Keep reading for that one. 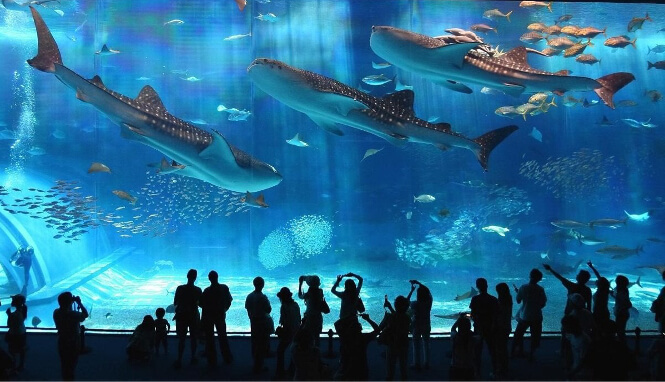 The Okinawa Churaumi Aquarium is officially the largest public aquarium in Japan with its 2,640,000 gallons of total water volume.

Japan has more than 17 major aquariums but the Okinawa Churaumi one is arguably the most impressive one.

It provides a home to both whale sharks and manta Rays in its main fish tank.

If you happen to visit it, make sure to also check out the floor that displays deep-sea creatures. 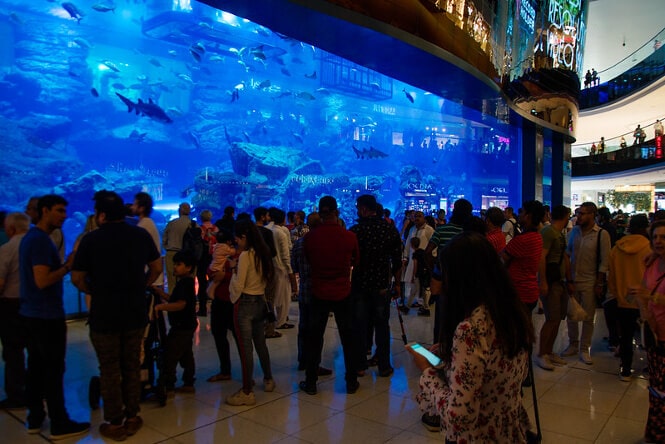 Dubai’s Aquarium and Underwater Zoo is honestly amazing with its unique architecture and 2.64 million gallons of water.

What makes it so entertaining are the numerous types of tours that you could enjoy during a visitation.

You could literally take a glass boat ride over the aquarium’s surface.

You could also arrange an unforgettable aquarium-themed birthday party for your kids.

If you’re a fan of luxury and fish that are exotic and cool-looking then Dubai’s Underwater Zoo is the place for you to visit. 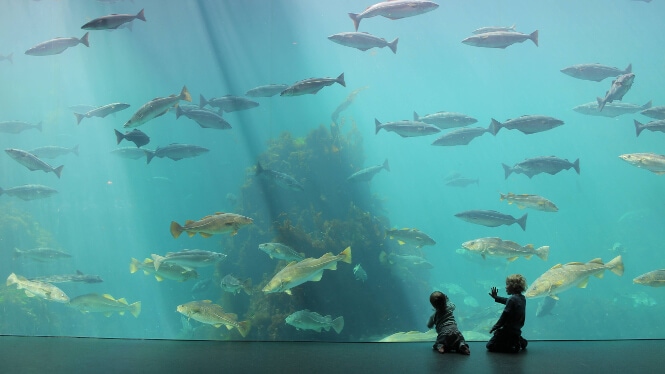 The Atlantic Sea Park of Norway is one of the biggest saltwater public aquariums in all of Scandinavia.

It is located in the city of Ålesund and it holds about 4,000,000 US gallons of seawater.

Unsurprisingly this public aquarium is displaying animal species from around the Atlantic Ocean, mainly from the coasts of Norway.

It should also be noted that Norway’s Atlantic Sea Park is home to one of the largest seal exhibits in the world. 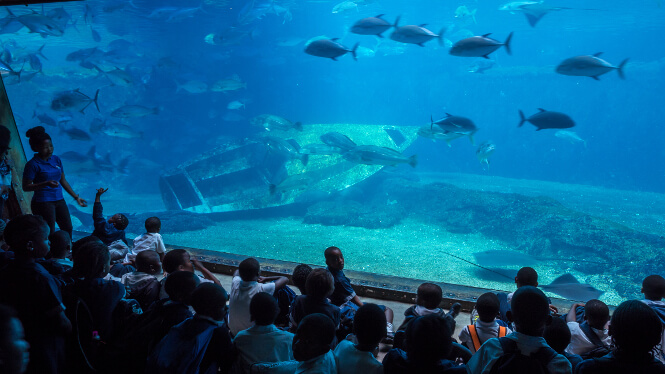 The uShaka Marine World theme park is among the top 10 largest aquariums in the world with a staggering 4,600,000 gallons of total water volume.

You can visit this enormous public aquarium in Durban, KwaZulu-Natal, South Africa.

The park itself has 8 entertainment sectors spread in nearly 40 acres of land.

The uShaka marine aquarium is the home of more than 10,000 saltwater animal species.

The Shedd Aquarium in Chicago, Illinois is almost 100 years old and is the 7th largest public aquarium in the world.

It houses a ton of exotic sea and freshwater animals such as lungfish, beluga whales, Lake Sturgeons (essentially a dinosaur fish!), and alligators.

The whole facility has also been inspired by classical Greek architecture, which may be another good reason to visit it (aside from the cool fish). 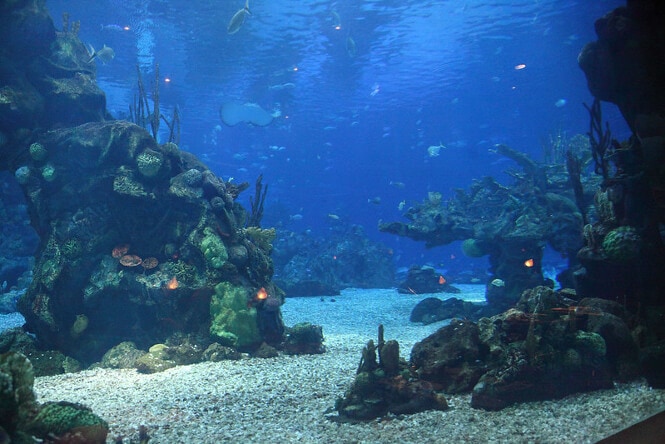 The creatively named “The Seas with Nemo & Friends” is a public aquarium that was previously known as The Living Seas, a world record holder until 2005.

This facility used to hold the record for the world’s largest public saltwater aquarium, right until the Georgia Aquarium opened doors and seized that title.

The aquarium itself is part of a Ride event at the Epcot, an amusement theme park under the operation of Walt Disney World Resort located in Florida.

With its tank size of 5.7 gallons, it holds the 6th place in the rankings of the world’s biggest aquariums. 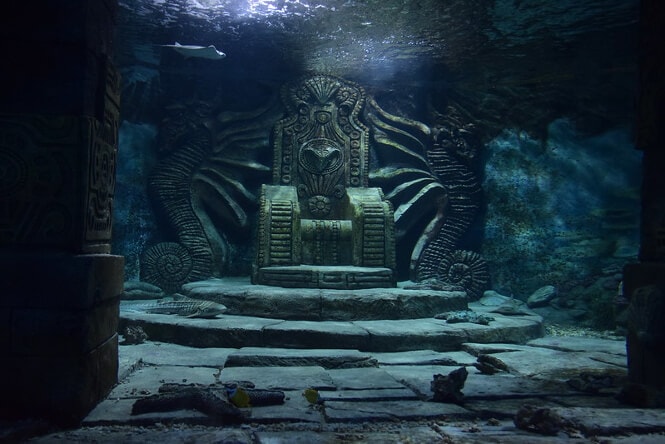 The gigantic Moscow Oceanarium is, evidently, located in Moscow, Russia.

It holds no less than 6.6 million gallons of total aquarium water, which makes it the 5th largest public aquarium worldwide.

It is relatively unpopular, given its total tank size and dimensions, but judging from the photos it is definitely worth visiting. 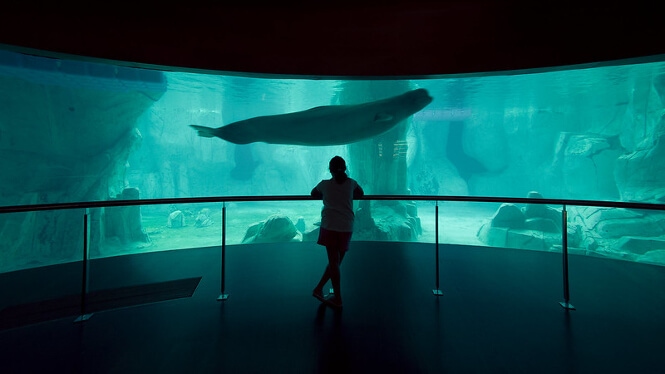 The Oceanographic also known as L’Oceanogràfic is the biggest large-scale aquarium in Europe. It is located in Valencia, Spain and the total water volume of its tanks is 11,000,000 US gallons or 42 million liters.

This European oceanarium has a separate tank of 1,800,000 US gallons that’s specially designed to harbor large marine animals such as rays and sharks.

Nevertheless, the Oceanographic is home to no less than 45,000 animals.

The facility also has impressive architecture, unique to water parks, as to be expected of the 3rd largest aquarium worldwide. 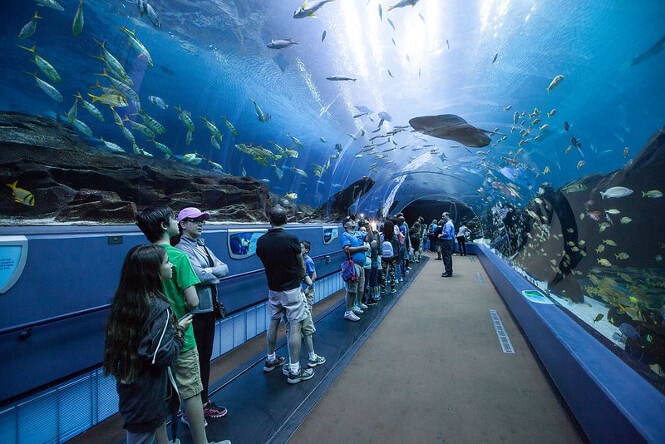 The giant Georgia Aquarium is situated in Atlanta, Georgia U.S. and holds no less than 11 million gallons of both fresh and sea water, which equals nearly 41,640,000 liters. The Georgia Aquarium is, therefore, the largest aquarium in the United States. The facility also held the title of the biggest public aquarium in the word for 7 years, until in 2012 it got surpassed by a bigger Asian aquarium. 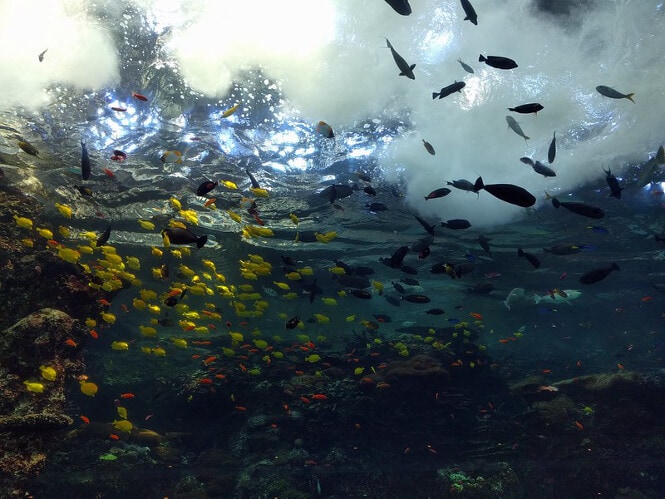 In October 2020, the facility expanded with a separate exhibit for sharks that added another 1 million gallons of water to its previous total tank capacity of 10 million gallons. Up until then GA was the 4th largest in the world, but the new shark facility officially pushed them to number 3!

Anyway, this enormous public aquarium is not foolproof, as in 2007 two whale sharks died within its borders.

Author’s note: The sharks were imported from Taiwan, and were to be eaten if not purchased by the Georgia Aquarium. 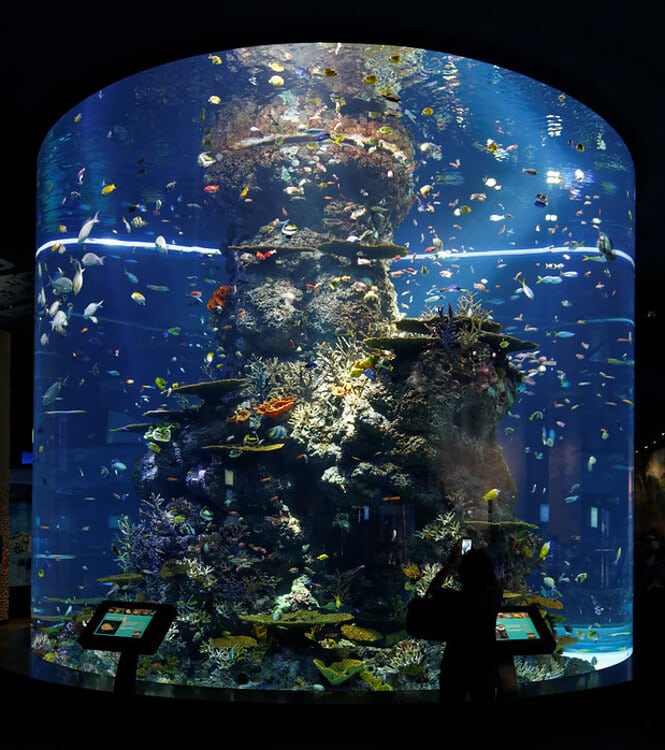 The S.E.A. Aquarium broke the world record for the biggest aquarium in 2012 and held the title until the next entry opened doors in 2014.

The S.E.A. Aquarium can be found in Sentosa Island, which is part of Singapore.

The S.E.A. has been unsurpassed in its impressive collection of manta rays.

This aquarium houses the world’s largest number of these mysterious creatures and is one of the 4 public aquariums worldwide that have manta rays.

The S.E.A. Aquarium is the second largest aquarium in Asia. 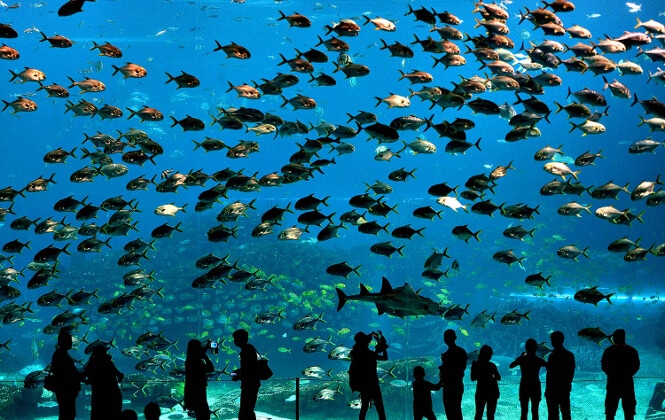 The facility is divided into 8 enormous zones with each providing an individual ocean-themed experience.

The themed ocean areas are as follows:

The Chimelong Ocean Kingdom also holds the world record for the largest aquarium window according to the Guinness World Records.

The Chimelong broke another world record in 2018 and holds it ever since – it is the most visited water park in the world with 2,740,000 annual visitors.