Having a clean sandbed in your saltwater aquarium can sometimes seem like a distant dream.

Fortunately, I did some research to provide you with a list of sand sifting goby fish that would stir the substrate in your tank in search of food or when digging holes to live in. This activity would help with keeping your sandbed free of small food leftovers and other organic particles that may otherwise spoil the quality of the water in the system.

Sifter gobies also help with aerating the sandy bottom, preventing harmful gasses from building up underneath.

That being said, let me show you the 7 sand sifting goby species that could keep the substrate in your aquarium sparkling clean.

7 Sand Sifting Goby Fish That Will Keep Your Sandbed Clean

While doing research for this list, I made sure to only pick gobies that are known to do an exceptional job at turning over sandbeds.

However, keep in mind that different goby species have different activity levels and so would suit tanks with different bottom footprints.

Also, though tank-raised specimens may accept prepared foods such as frozen brine shrimp, spirulina, or live worms, these types of fish feed on the microfauna within the substrate. As such they require a fairly mature tank to thrive.

For this reason, in most cases, you’d want your aquarium to have been up and running for at least a year prior to introducing the sifter.

That being said, have a look at the sand sifting goby fish that could go in your saltwater aquarium: 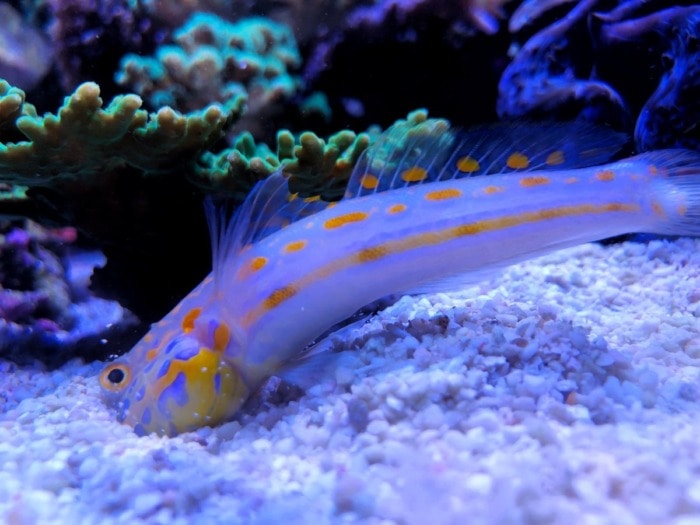 The Diamond Goby from the Valenciennea genus is very popular sand sifting fish, mainly because it’s so good at what it does.

In fact, this species of goby does its job a little too well.

A sand sifting Diamond Goby may constantly move sand around and sprinkle particles all over the corals you keep on the bottom. You’d likely need to blow them off once or twice a week or simply reposition them.

Users who keep Diamond gobies sometimes complain that the fish creates sandstorms in the tank.

A cloudy aquarium is not great to look at, but it should eventually get filtered by your mechanical filtration media.

So if this fish is so messy why would I recommend it then?

The goby itself is not aggressive but grows large enough not to get eaten while keeping the sand it sifts through sparkling clean.

Following these thoughts, a large, mature tank with no corals on the bottom makes the perfect habitat for this sand goby species.

The sand will be moved around, but not enough to cloud the water. 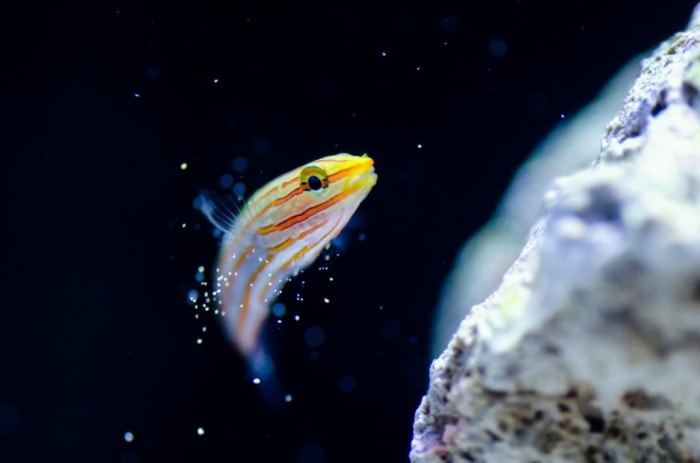 The Court Jester Goby, also known as Rainford Goby, is a peaceful nano fish that can sift through the fine sand in your small saltwater tank. These fish don’t have large mouths and so a single specimen won’t do a good job at turning over the substrate in tanks over 20 gallons.

The Court Jester goby fish belong to the Koumansetta genus.

In any case, they would only sift through the top layer of the sand and won’t bury your corals on the bottom.

Captive-raised specimens are among the truly reef safe saltwater fish known in the hobby.

For this reason, the Court Jester goby can be an excellent sifter for a nano reef tank.

Author’s note: Wild-caught Court Jester Goby fish are very finicky eaters. Even a mature sand bed with a lot of copepods and micro-algae may not be enough to keep the fish alive in the long run.

For this reason, I recommend only getting captive-bred specimens who will readily accept prepared food when the sand runs out of nutrients. 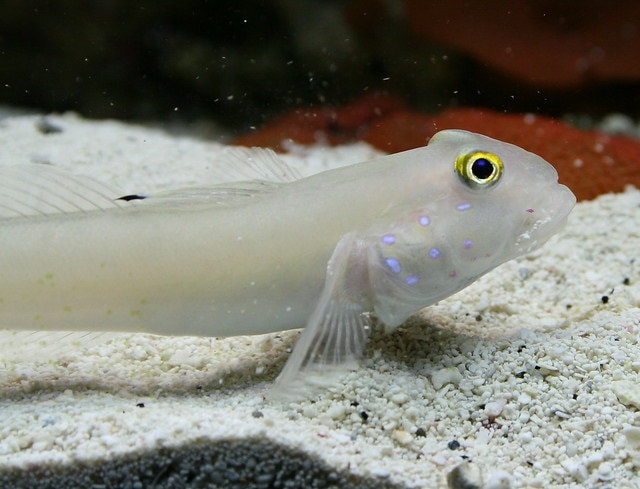 The Sleeper Blue Dot Goby will keep the sand in your tank sifted without spreading it all over the rockwork. This goby fish reaches about 5.5 inches when mature, which makes it a perfect addition to a 30 to 50-gallon tank with a deep, mature sandbed.

This six-spot goby is a member of the Valenciennea genus.

Anyway, the Sleeper Blue Dot Goby will methodically scoop sand while carefully releasing it at pretty much the same spot.

Author’s note: One thing to be aware of when keeping this saltwater fish is that it will dig multiple burrows for itself. This means that your aquarium rocks should not rely on the sand to stay in place. Just position them in such a way that if a hole is dug under, the rock won’t collapse. 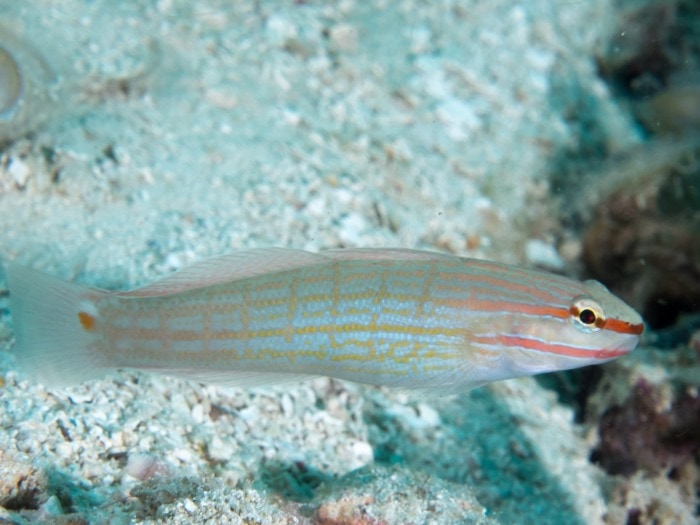 Coming from the Amblygobius genus, the Orange Crosshatch Goby is one of the best sand-sifting species of fish to keep the sand in your 20 to 30-gallon nano tank aerated and clean.

It sifts less aggressively than the Sleeper Blue Dot Goby, but enough to maintain the bottom free of debris.

The Orange Crosshatch Goby would leave the processed sand roughly where it has picked it from. This goby species does not grow more than 4 inches in adult size and is, therefore, one of the best sand sifters for small reef aquariums. 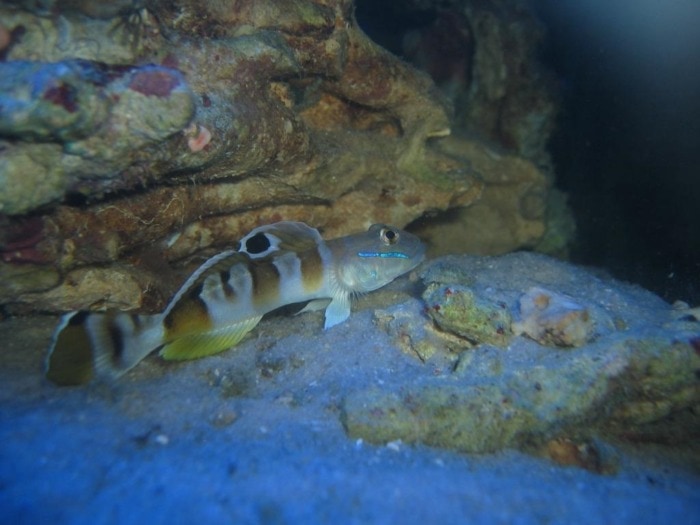 The Tiger Watchman Goby is one of the species among the Valenciennea genus.

One of the best things about the Tiger Watchman Goby fish is that it would usually release all of the scooped sand in its mouth close to the substrate. These fish don’t create sandstorms like a Diamond Goby would and still manage to turn large amounts of sand in an aquarium.

I wouldn’t say that none of your corals on the bottom would get buried but, with a Tiger Watchman Goby, it’s way more manageable.

For these reasons, this species of Goby is a great sand sifting creature for medium-sized marine tanks. 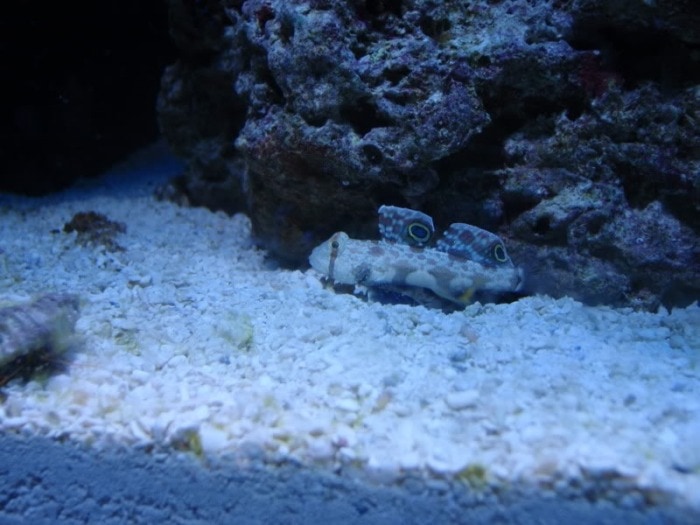 The Twin Spot Goby, also known as a Crab-eyed Goby, is the only known member of the Signigobius genus.

The Twin Spot Goby is an exceptional sifter fish because it tends to stay near the substrate’s surface when releasing sand grains from its gills. This small saltwater fish is very active in digging and turning over the sandbed and does not create a mess while doing so.

The caveat with Twin Spot Gobies, however, is that they are fragile and very difficult to keep alive long-term.

Your sandbed may be established with copepods and amphipods and the goby may still refuse to eat from it.

If you’re experienced with spot-feeding nano fish then the Twin Spot Goby can be a good addition to your small saltwater aquarium. 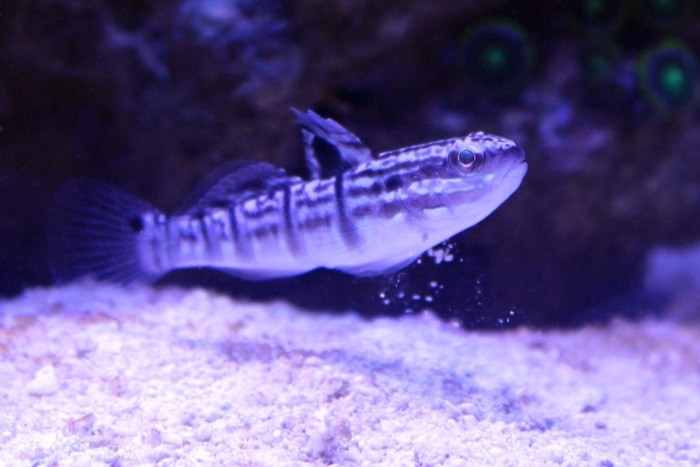 The Sleeper Banded Goby may not be as tidy when sifting through sand, but it’s one of the hardiest species you could find for the job.

Occasionally, this type of goby would swim roughly 5 inches off the substrate while still filtering the sand through its gills.

In comparison with the mindless digging machines from the Valenciennea genus, the Sleeper Banded Goby is a breeze in the afternoon when it comes to creating sandstorms in your aquarium.

Anyhow, keeping a Sleeper Banded Goby makes sense in larger tanks that have no corals growing on the bottom.

In this kind of setup, the goby won’t be able to create any noticeable mess.

Anyway, one great quality of the Sleeper Banded Goby is its resilience and good survival rate.

That’s because this goby fish would usually accept prepared foods.

These qualities make the Sleeper Banded Goby one of the best saltwater aquarium gobies for beginners.

Anyway, another great benefit of having this sand sifter in your tank is that it also picks on filamentous algae.

Don’t expect the Sleeper Banded Goby to surpass the saltwater fish best known to eat algae in efficiency, but rather consider its diet a small bonus to the overall cleaning service.

Do You Really Need a Sand Goby Species in Your Tank? 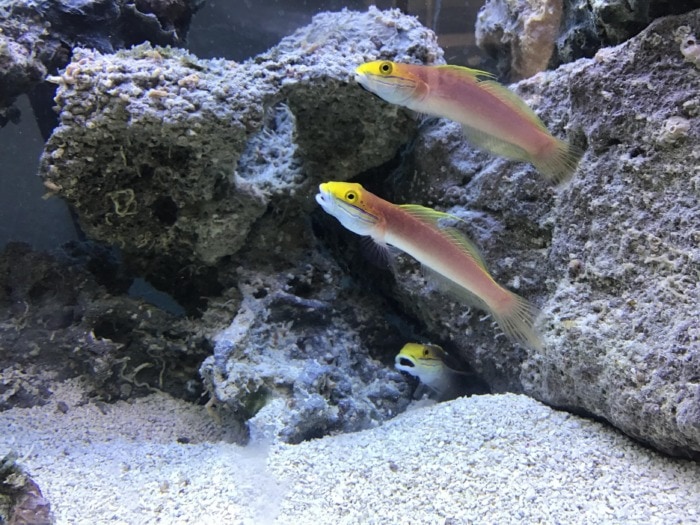 Keeping one of the goby species I listed makes sense in a mature aquarium with a dirty sandbed that’s populated with microfauna.

If your tank has a deep sandbed that needs aerating and cleaning or is covered with some form of microalgae, you’d reap the benefits of owning one of these fish.

However, you should be tolerant of a certain degree of messiness.

It’s impossible to turn sand over without moving things a little or sprinkling some particles here and there.

I made sure to mention what to expect with each goby, so read carefully and think this through.

Before moving forward with your choice you make sure to evaluate if your aquarium really needs a goby species that will do nothing but constantly sift the sand. 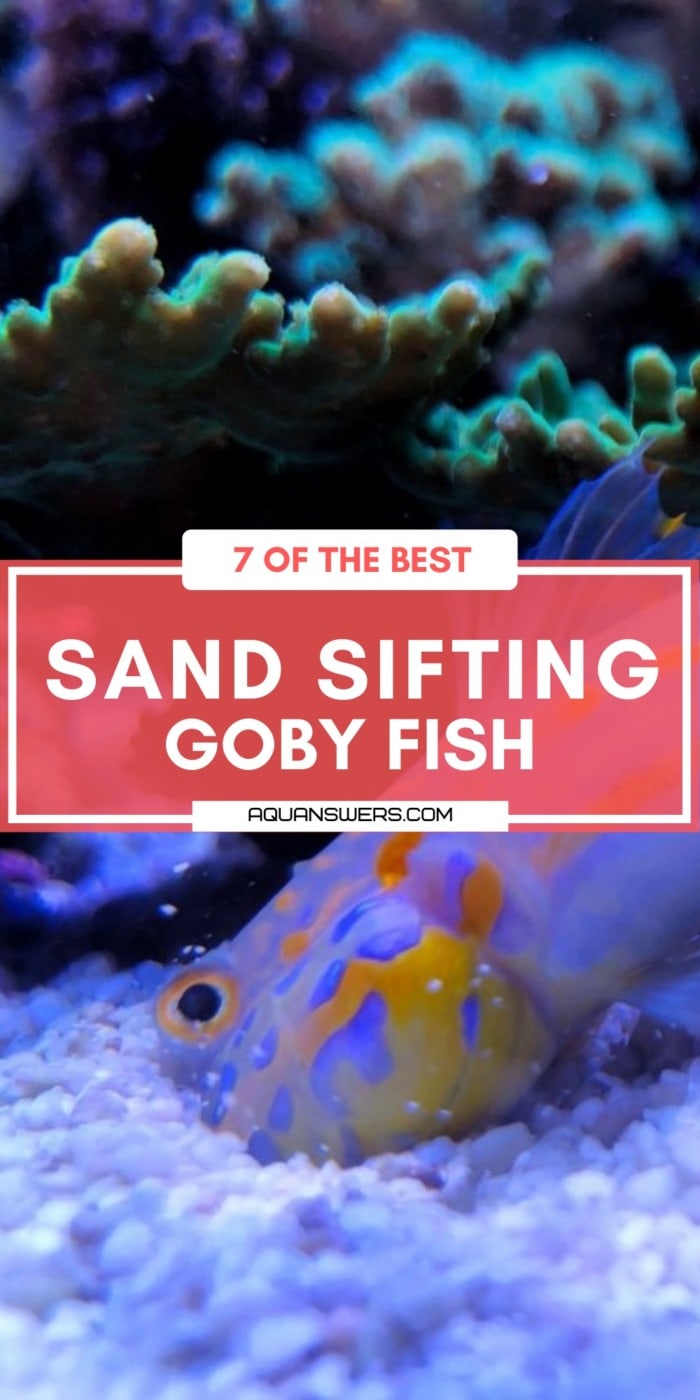