Adding driftwood, rocks, and plants to your fish tank is a great idea, but these may come with unexpected intruders that can eventually cause trouble.

The first time I witnessed a concerningly large number of small aquarium snails in my tank was at night.

It left me shocked, as I hadn’t seen any signs of infestation during the day. It turned out that it was common behavior for these tiny cone-shaped snails that I later identified as Malaysian Trumpet Snails.

Since they’re nocturnal, they’d hide under the substrate during the day, which is why I couldn’t really tell they were overpopulating my aquarium.

I then tried to get rid of them as fast as I could, but for a while, it was hard to keep their number under control.

In this guide, I’ll go over the most common smaller types of freshwater aquatic snails that infest fish tanks.

I’ll make it easier for you to identify these small gastropods and eradicate them, by giving you simple yet efficient tips from my experience.

So let’s dive in.

The 4 most common tiny aquarium snails that infest fish tanks

To be fair, keeping small aquatic snails can be good for your fish tank. After all, some of them keep algae under control, aerate the substrate, and take care of uneaten fish food.

Over the years, I’ve intentionally added Nerite, Mystery, Rabbit, and Assassin snails to some of my freshwater aquariums. I’d say that the larger ones are pretty much safe, as long as they don’t multiply very rapidly and don’t lay unsightly eggs that would never hatch.

But some types of tiny snails are prolific breeders that can overrun an aquarium almost overnight.

This puts these little creatures in the pest category as far as the aquarium hobby is concerned.

So here are the small aquarium snails that can infest your fish tank:

Because of its fast reproduction rate, the Malaysian Trumpet snail is one of the most common small gastropods that infest freshwater aquariums. It is actually an invasive species introduced to the US by the aquarium hobby.

These tiny aquatic creatures hitchhike on aquatic plants and decorations and are often introduced to a home aquarium non-intentionally.

It’s quite easy to identify the Malaysian trumpet snail – it has a long conical shell with rings that resembles the shape of an ice cream cone.

The color of these little intruders varies from one specimen to another – they can be brown, gray, creme-colored, or even yellow.

Some Malaysian trumpet snails even have dark red or brown stripy patterns and speckles on their shells.

These freshwater snails remain tiny throughout their lifetime as they reach a maximum size of around 1.4 inches (3.6 centimeters). 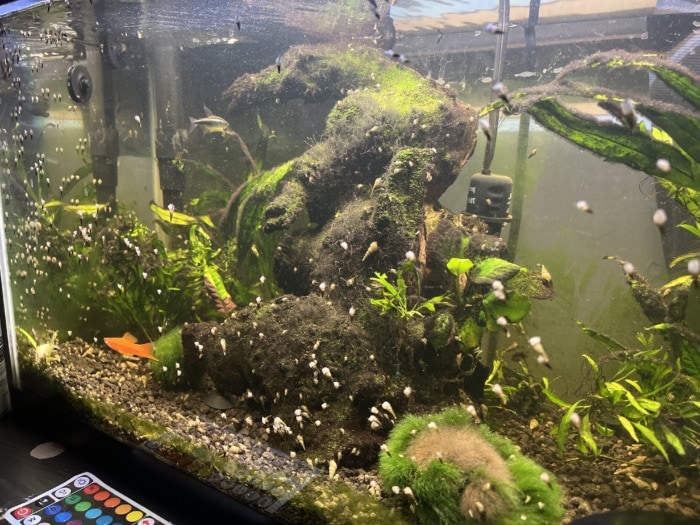 When they’re juvenile, they’re extremely small and would often hide in the substrate and plants.

That’s why you wouldn’t even notice how much they’ve grown in number until they reach a certain size and crawl out of their hiding spots at nighttime.

In fact, these snails can bring some benefits to an aquarium:

Even though they’re beneficial to a certain degree, Malaysian trumpet snails are often considered pests.

They multiply rapidly and can overpopulate your aquarium in no time.

The high reproduction rate is caused by the fact that these snails are what’s known as parthenogenetic.

This means that the female Malaysian trumpet snails can reproduce without being in contact with a male.

Furthermore, these small aquarium snails are quite hardy and can live a healthy life in a wide range of water conditions. If there’s an abundance of food leftovers, algae, and rotten plants – these tiny gastropods will start multiplying like crazy.

You can control their reproduction rate by doing two things:

Nevertheless, once Malaysian trumpet snails have grown in number, it can be quite difficult to get rid of them.

This is another reason why many aquarists view these aquatic creatures as an extremely annoying pest.

Like other nuisance snails, Malaysian trumpet snails tend to clog filters, intake strainers, and impellers, which I’ve found to be quite frustrating. 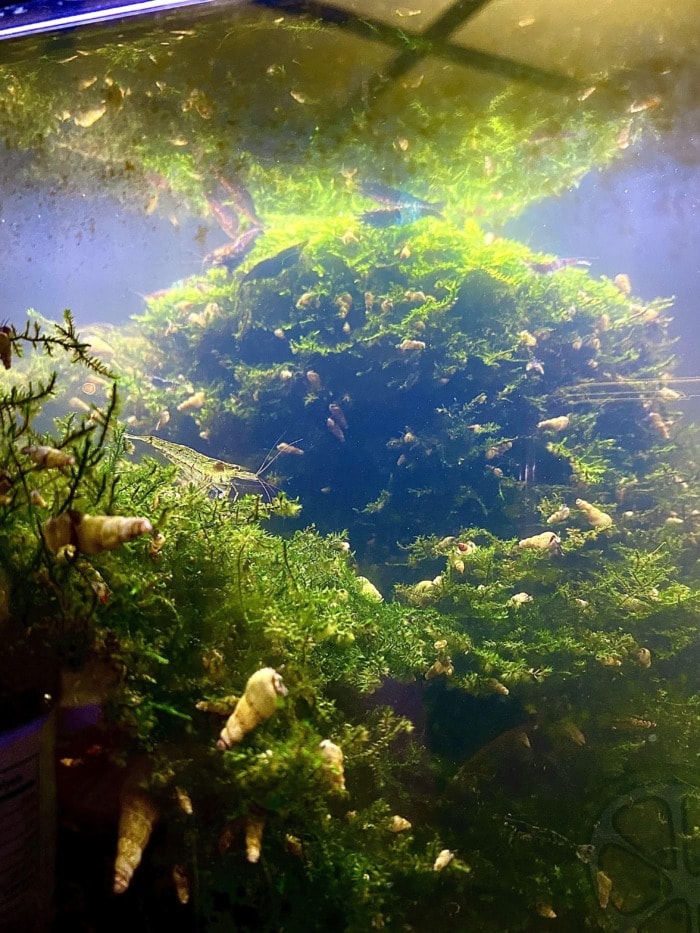 With that being said, many fellow hobbyists of mine keep Malaysian trumpet snails on purpose…

The people in question cite these snails’ great scavenging and sand-sifting abilities as the reason.

Anyway, I’ve found that I should feed my pet fish moderately, and there shouldn’t be unlimited food sources for these tiny creatures.

I’ve discovered that by following these two simple rules the Malaysian trumpet snails won’t cause an infestation and overpopulate my aquarium. 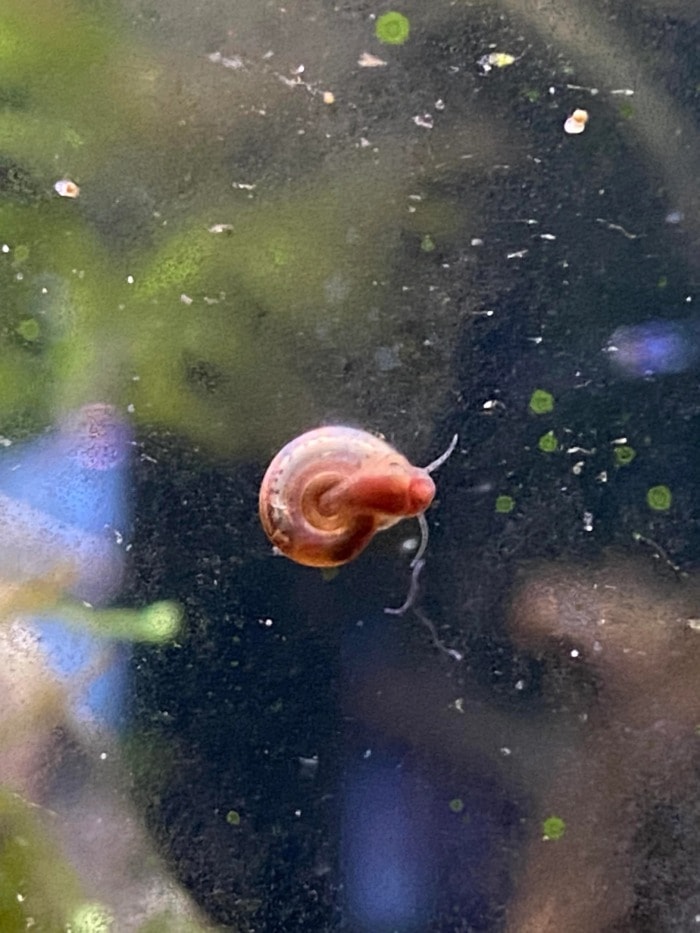 Mini Ramshorn snails are representatives of a very tiny snail species from the freshwater Planorbis genus.

This species grows to a maximum size of a quarter of an inch (6 mm).

Because of their small size, these spiral-shaped snails attach to plants and decorations unnoticed and travel to home aquariums by accident.

If there’s enough food, the Mini Ramshorn snails multiply rapidly and lay a dozen clear eggs at a time. Their eggs are quite hard to notice, especially if attached to plants or decorations.

Therefore the addition of a new plant or decorative piece often has aquarists surprised by the following micro snail outbreak.

These little aquatic creatures are considered pests in the aquarium hobby since they reproduce quite rapidly and may overpopulate the aquarium.

Especially if there are too many food sources available to them.

Anyway, Ramshorns are hermaphroditic, which means that two specimens of any sex can breed.

Once added to the aquarium, its whole glass may become covered in hundreds of these small aquatic creatures in no time. 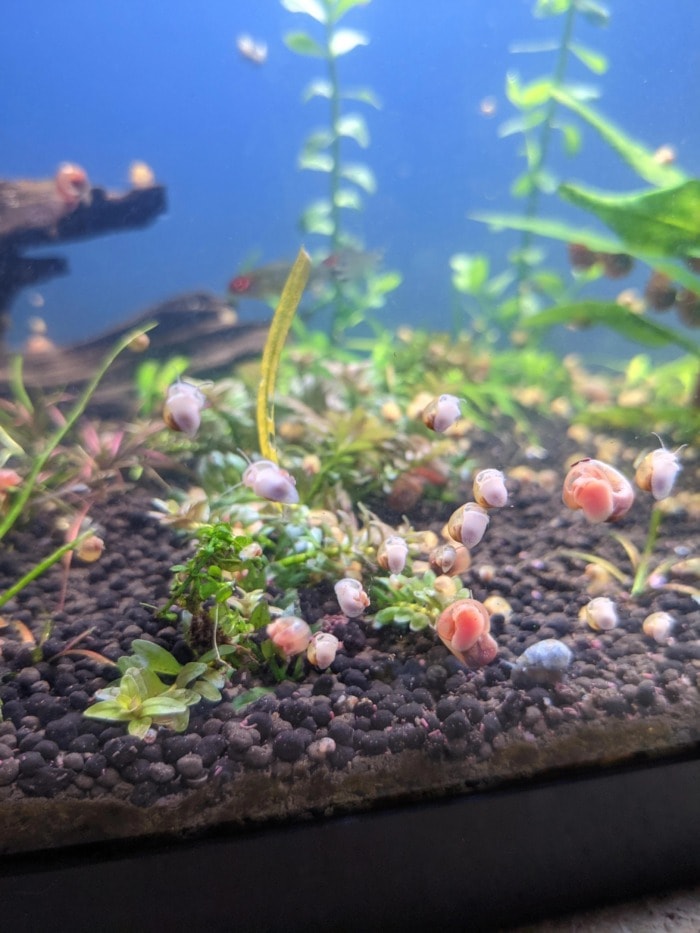 Even though they’re great at keeping the glass clean from algae, too many Mini Ramshorns would inevitably spoil the looks of your display tank.

Furthermore, these little gastropod mollusks tend to get into aquarium filters and in-between tiny crevices.

This habit of theirs makes it very hard to remove them in order to handle the infestation and completely eradicate them.

They are great scavengers that take care of excessive algae growth. 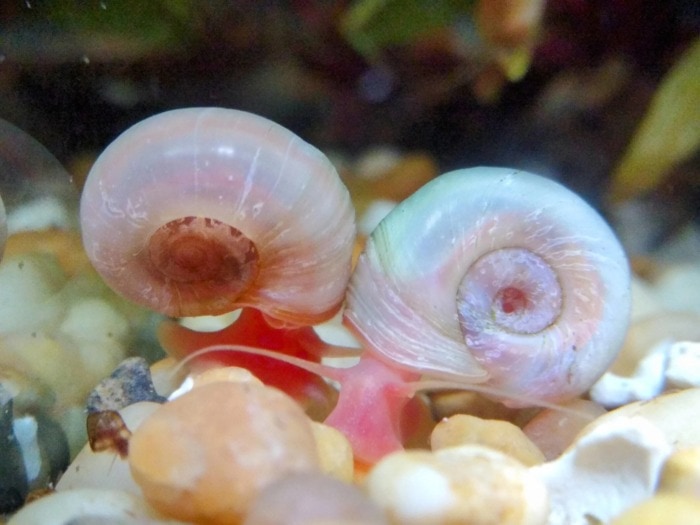 The Great Ramshorn snail is bigger in size – around 1.6 inches (4 cm) when fully grown.

The bigger Ramshorns have attractive looks and vary in coloration.

There are darker brown, orange, and pink ramshorns.

The Mini ramshorn is quite similar to the Great Ramshorn.

However, the shells of the former go out to the side and layover sideways, while the shell of the latter stays up on its back.

The bigger ramshorn species may also reproduce rapidly if there is an unlimited food source, but it takes more food for them to multiply at such a high pace.

Furthermore, Great Ramshorn snails are easier to locate and remove, unlike the Mini Ramshorns. 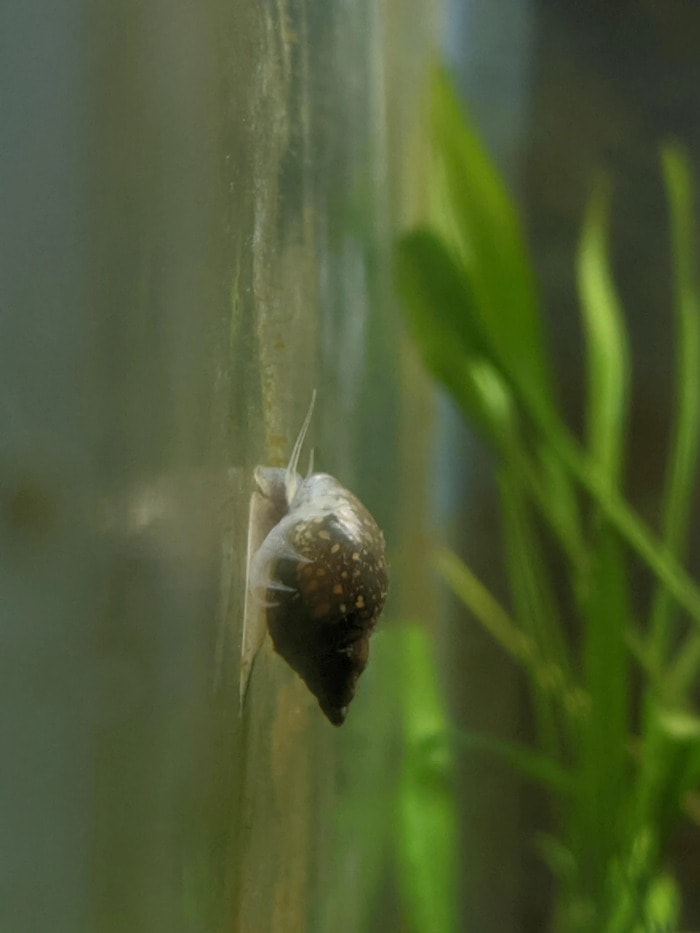 The bladder snail is one of the most common aquarium snails that infest freshwater fish tanks.

I’ve often accidentally introduced them to my systems with the addition of new plants.

They fulfill the four main traits of a resourceful aquarium pest:

Bladder snails are omnivores but they mainly eat algae, so they are great cleaners.

They are quite small – 0.6 inches (1.5 cm) when fully grown. Bladder snails also tend to lay their eggs in the canister filter and their babies would stay in there for a while, which can clog the filter up.

These little creatures are often confused with another tiny aquarium snail that is considered a pest – the pond snail. Bladder snails have a brown or dark yellow semi-translucent shell that often has yellowish speckles.

The shell of the bladder snail is used to identify the species, as unlike other snails – it spirals to the left. 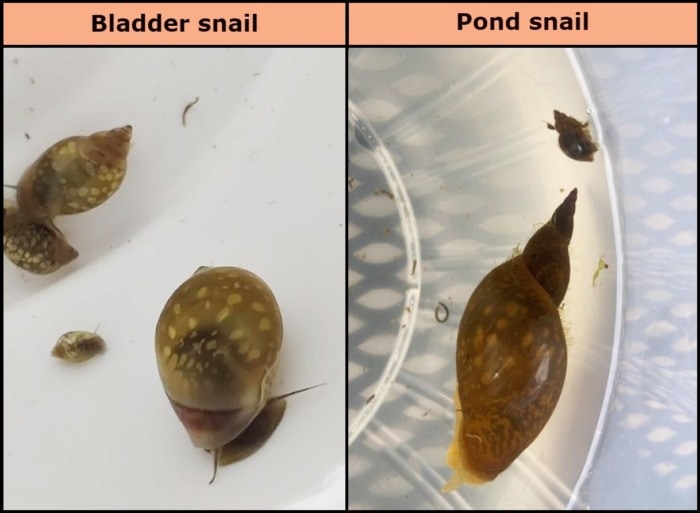 Both bladder and pond snails are considered aquarium pests, as they tend to spread rapidly if food is abundant.

Nevertheless, I’ve actually found it harder to get rid of bladder snails, as they are tinier and somewhat more successful when it comes to hiding. 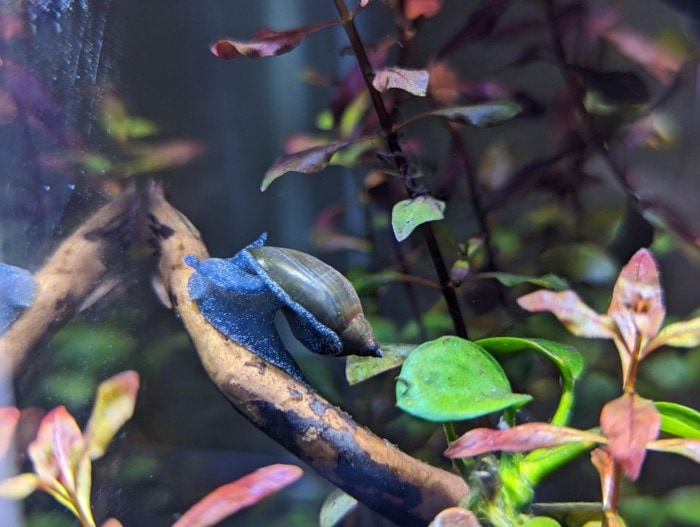 Pond snails are small freshwater snails that usually reach a maximum size of 1 to 2.5 inches (2.5 cm to 6 cm).

These are the largest of the small snails on this list.

They are hermaphrodites that reproduce rapidly if there’s too much excess food leftovers, algae, and decaying plant matter.

For this reason, these tiny aquatic creatures are considered pests by many aquarists.

Pond snails are usually light or dark brown. You can also recognize them by their behavior – they are more active during the night.

These small snails can easily sneak into your tank with the addition of a new plant or decoration. That’s due to Pond snails laying batches of transparent jelly-like eggs that are hard to locate with the naked eye.

The pond snail babies mature quickly which contributes to a surprise infestation.

If you’re overfeeding your pet fish, the pond snails may explode in population and overrun your aquarium surprisingly fast.

How to get rid of pest snails in your aquarium?

A pest snail outbreak in your aquarium indicates that something’s wrong with the system.

Pest snails reproduce fast when there is an unlimited food source readily available to them.

To prevent them from multiplying rapidly and overpopulating your tank, you should make sure that you don’t overfeed your fish.

No resources in an aquarium will ever go to waste. It will be either your fish and plants that will take advantage of the surplus or a pest such as snails, worms, or algae.

Anyhow, if there’s a snail outbreak in your tank, you should also have a look at your aquatic plants.

If they are dying off, then they are leaving too much decaying plant matter for the snails to eat.

This in itself may explain why the gastropods reproduce so rapidly.

Of course, too many snails in your tank may also indicate that you should put a bit more effort into its maintenance (vacuuming the substrate, water changes, etc.).

With that being said, I have a resource describing a few more ways to get rid of an infestation in your aquarium. Here’s a quick summary of that:

Small snails would only infest freshwater aquariums if there’s too much food available to them.

If you do proper fish tank maintenance, you won’t experience snail outbreaks, even if you’ve accidentally introduced some of the prolific species described above.

There are quite a few advantages to keeping aquatic snails anyway.

They will clean your display tank glass from algae, and take care of food leftovers and decaying plant matter.

They’d also aerate the substrate. Furthermore – they are a great tank health parameter.

If they start multiplying rapidly, you should definitely look into your aquarium’s condition.

Anyway, I hope that you found my article useful.