For example, years back, I started noticing some white fuzzy stuff growing in my new fish tank.

At first, the cotton-like fuzz grew on my driftwood but later I saw it taking over the bottom of my aquarium as well.

The fuzzy substance was spreading onto the substrate and the tank’s glass.

Naturally, I was worried that it may eventually harm my fish.

Initially, I thought I was dealing with white algae of some sort. It turned out, however, that it was likely a water mold that would often cover new decorative pieces, plants, rocks, and driftwood. 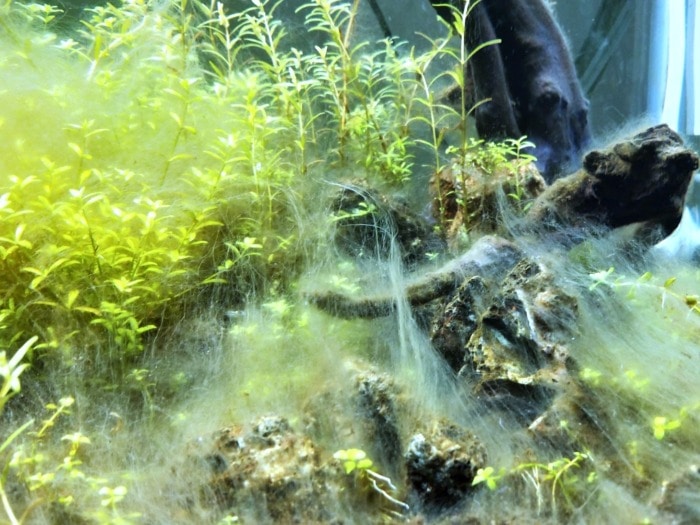 Ever since I’d sometimes need to deal with this thing when adding new decor to even my established tanks.

But how can you get rid of this nuisance?

Why did the white fuzz appear in your tank anyway, and is it really a fungus or stringy algae?

What is the white fuzzy substance in my fish tank?

The white fuzzy-looking stuff that grows on the surfaces in your aquarium would often be referred to as “white algae”.

However, if you’re dealing with cottony growth in your fish tank, then it’s most likely water molds.

These molds are basically species of microscopic aquatic fungi.

Even though filamentous and Staghorn algae can sometimes appear white, they don’t spread as rapidly as the fluff, caused by fungus.

Furthermore, algae are more stringy and don’t appear as fluffy or cottony as water molds.

With that being said, there are ways to prevent and treat both white algae and fuzz.

To do that, it’s essential to understand what the white fuzzy stuff growing in your fish tank is:

The fluffy growth in your fish tank is actually water molds, usually from the genera Achlya, Leptolegnia, and Saprolegnia. The cotton-like substance consists of fungus filaments that break down the decaying organic matter inside your aquarium. These filaments are natural for the aquatic environment. If there is excess growth of white fuzzy mold in your aquarium then it’s likely due to large amounts of food leftovers, decaying plant matter, or a dead fish.

Is it harmful to your fish and other aquatic inhabitants?

Generally, the water mold isn’t harmful to your fish.

Nevertheless, if there’s too much mold in your tank, and it’s a Saprolegnia species, it may try to transfer itself to your aquatic pets. In such cases, fungal infections appear as white fuzzy patches on the body and fins of your fish (visit the link and scroll down to see more pictures).

This can be dangerous for your fish, as the Saprolegnia may start breaking them down alive.

This then turns into a disease, known as Saprolegniasis. Therefore, if white mold is taking over your aquarium, you should treat it to prevent fish infections.

With that being said, you shouldn’t be worried if mold appears in restricted areas or on a few decorative pieces. For example, if you add a new driftwood piece to your fish tank, and a day later you see it covered in a somewhat fuzzy or slimy white film, don’t worry. 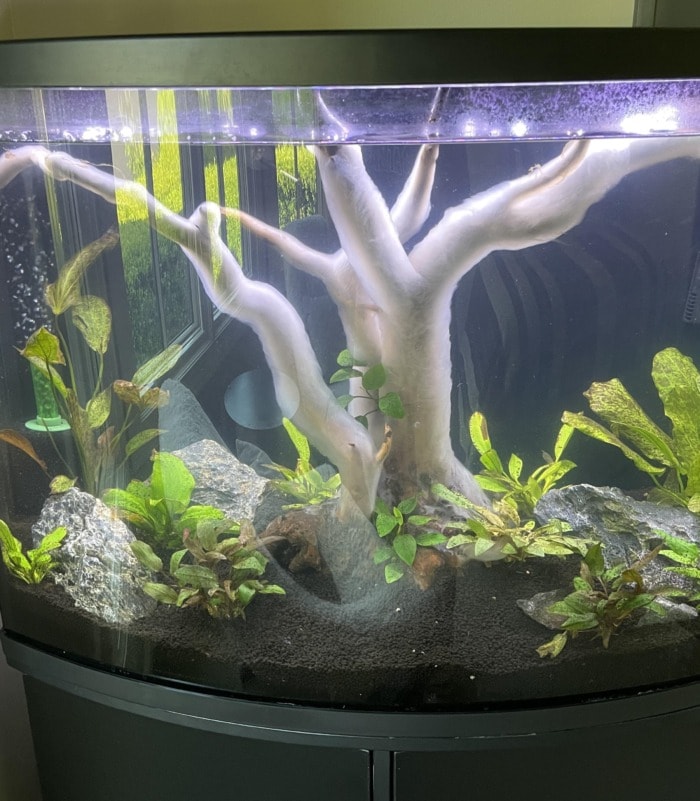 When driftwood finds itself in an aquarium, it starts releasing carbohydrates and other substances that feed the fungus and bacteria.

Even if you’ve soaked or boiled your new decorative piece in advance, the white stuff will likely cover its surface for a while.

In time, the bacteria fungus or mold will disappear on its own.

In this case, you shouldn’t worry about it, as it isn’t dangerous to your fish.

Author’s Note: Sometimes the white fuzz appears on our aquatic plants. In these cases, the plant itself probably has damaged and decaying plant matter. The dead matter then gets temporarily colonized by bacteria or fungi. White cotton-looking fungus would also sometimes appear on new rocks and aquarium glass for a short time, and all for the same reasons.

What causes white mold to appear in my aquarium?

String algae outbreaks are typically caused by too much light, or high Nitrate, and Phosphate levels. However, there are multiple common things that can cause white fuzzy mold to appear in an aquarium.

Basically, there are a few specific scenarios when this can happen and I will explain each of them below:

You have a new fish tank that is still cycling 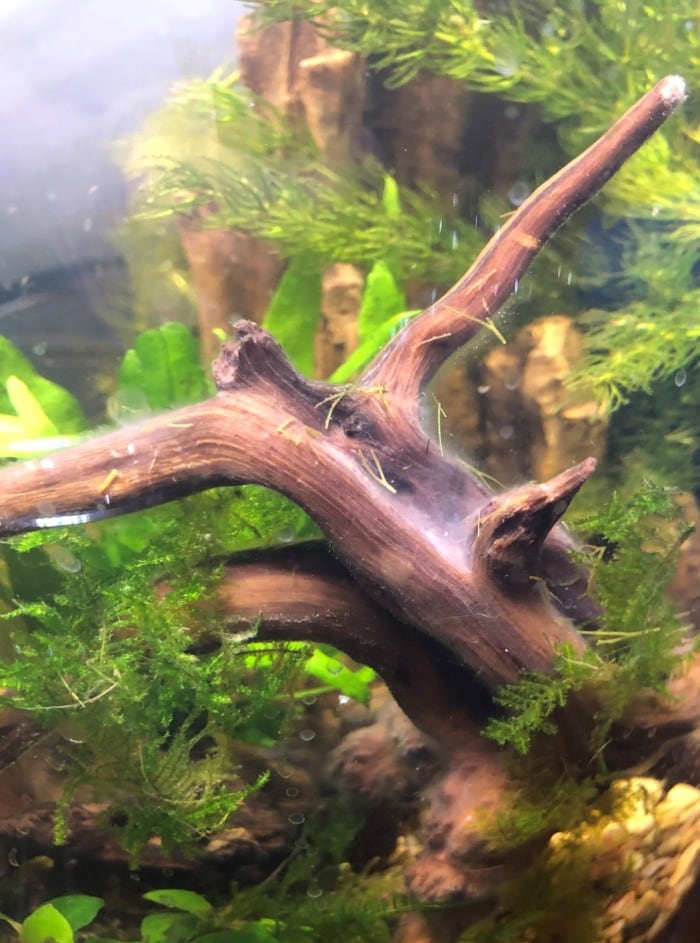 “Cycling”, also known as the Nitrogen cycle, is the somewhat long process of beneficial bacteria still establishing themselves in your new aquarium.

The white fuzzy stuff would often appear in new aquariums where the nitrogen cycle is still incomplete.

The fungus would cover driftwood if you have any, the substrate, and other aquarium ornaments rapidly.

This happens because there are not enough beneficial bacteria that would otherwise break down the excessive nutrients.

The fungi temporarily outcompete these bacteria and take advantage of the available resources in the system. But don’t worry – this is a natural process.

In time, there would be enough beneficial bacteria to displace the mold in the first place in the battle for organic matter.

Once the aquarium is established and the water – stabilized, you won’t notice any more white fuzz.

Author’s note: If your tank has a stable Nitrogen cycle, you may not get fungus in the first place. This means that once your tank has matured you won’t have to deal with the nuisance after every addition of a new driftwood piece, for example.

Anyway, through my experience, I’ve also found that cottony mold would be very likely to develop in new fish tanks that are being cycled with raw shrimp.

That’s a common method of kickstarting the colony of beneficial bacteria in new tanks.

The fungus would first develop on the piece of shrimp and then spread some more around it.

My experience has been that this cycling method takes more time and it’s not the best approach to kickstart the Nitrogen cycle.

I don’t like waiting for a couple of weeks before I can add fish to a new aquarium. If you’re at this phase and want a quicker method – check out this post to see how I recommend cycling your new fish tank. 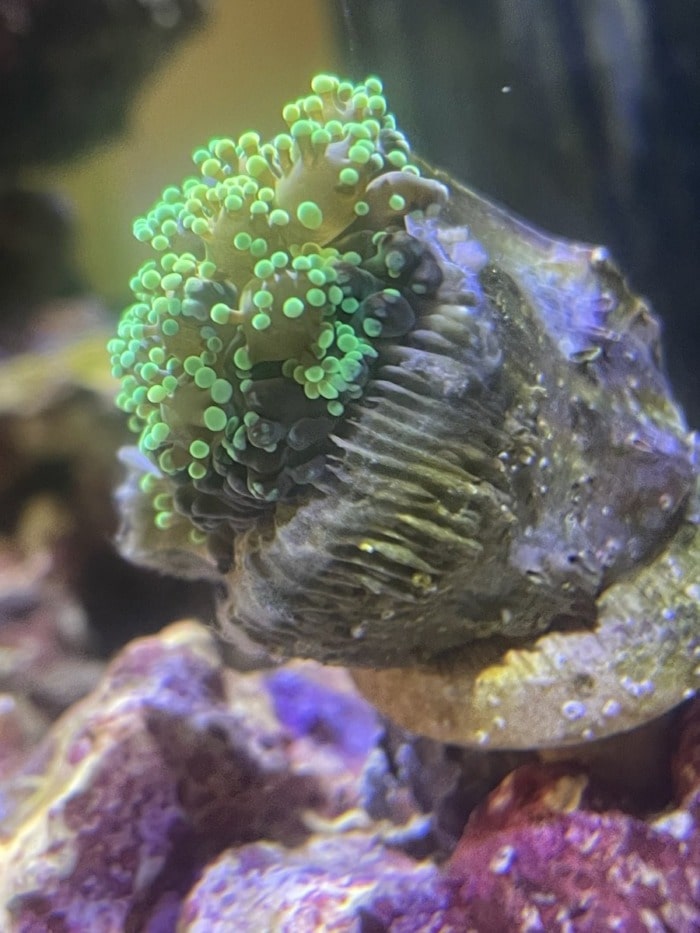 Fungus would most often appear on newly added driftwood, plants, or other ornaments that carry dead organic matter.

If you’ve recently put a new decoration in your tank, and it’s covered with white fuzz or slime – don’t fret.

You can wait it out, and the fungus will naturally disappear once their food source is depleted.

The filaments will only spread if there are other aquarium conditions, promoting their growth (too much organic waste, bad water circulation, low pH, etc.). 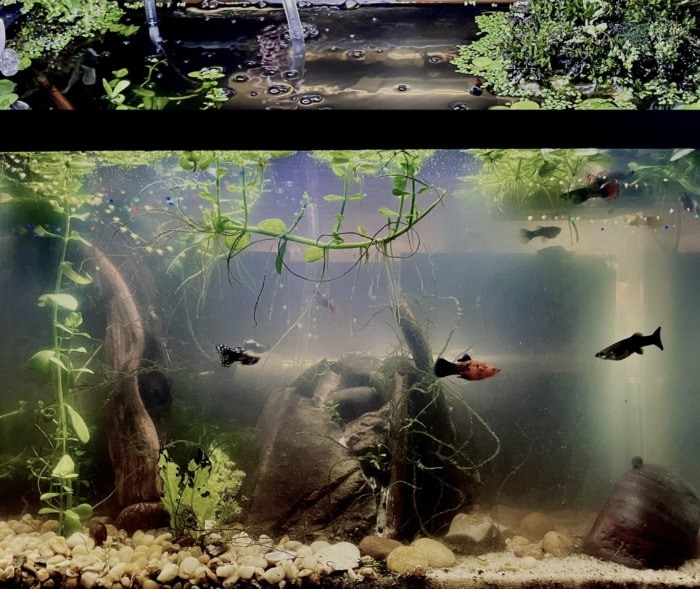 If you’re a bit too generous when feeding your fish, the food leftovers at the bottom of your tank will promote the growth of mold.

Since most of us deeply care about our aquatic pets, we tend to overfeed them.

This is especially true with Betta fish where concerned aquarists tend to feed them too many times a day.

That’s because Bettas are the common choice amongst beginners who aren’t aware that feeding their fish too much will do more harm than good.

On top of that, overfeeding could lead to abrupt ammonia spikes and subsequent fish deaths.

To avoid the appearance of white fungus in your aquarium, make sure you remove the food surplus after your pet fish finish their meal.

This way you will prevent the rapid accumulation of mulm in the tank’s substrate and the subsequent fungus infestation.

You should also come up with an adequate feeding schedule, based on the fish species you keep. 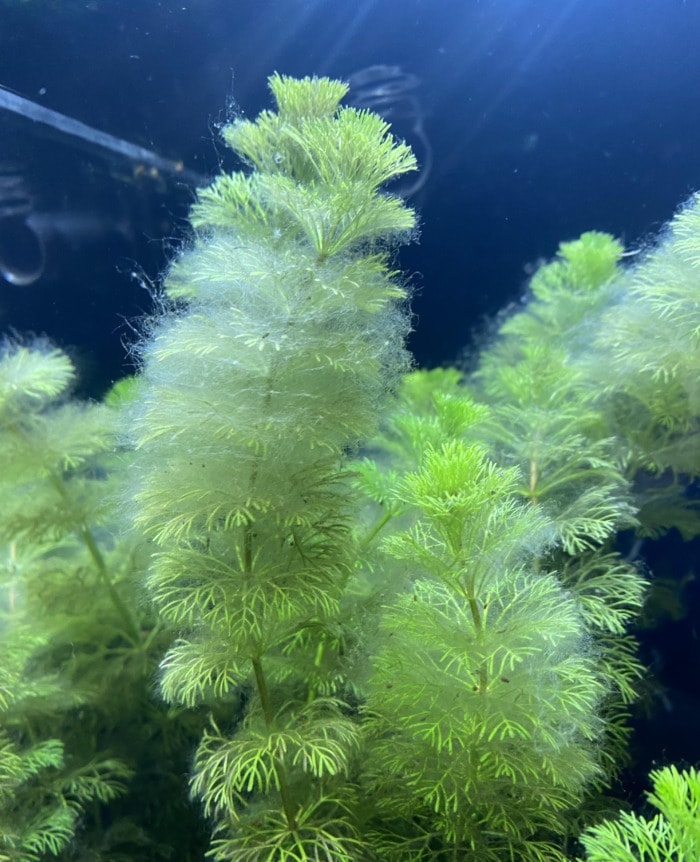 If you have a planted tank and you’re noticing white fungus, then you should examine your plants’ health.

If there are not enough beneficial bacteria in the tank, the fungus filaments would happily feed on the decaying plant matter and multiply. 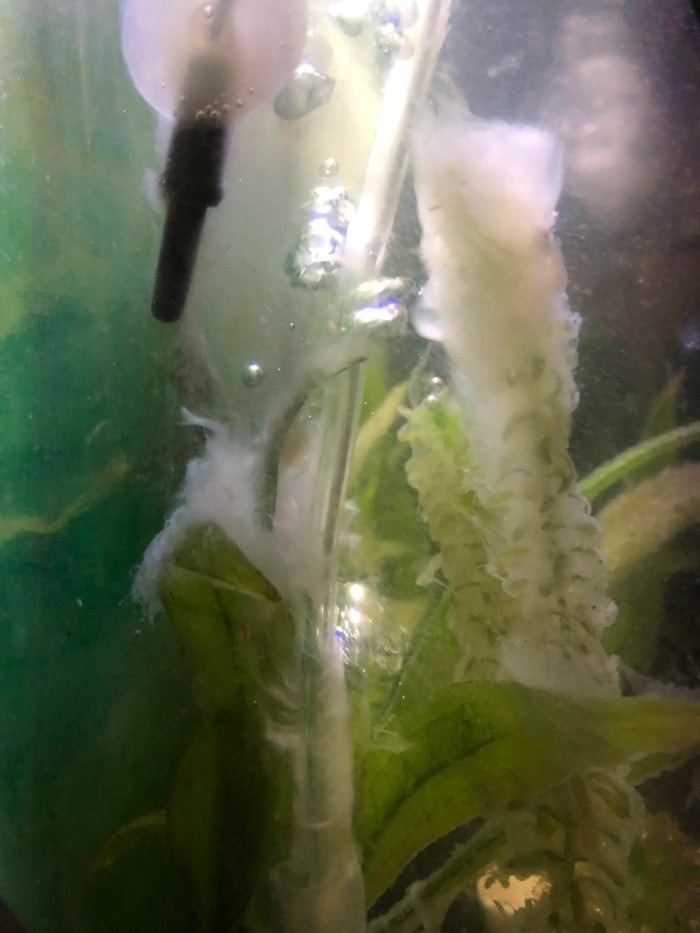 Water mold often appears in areas with stagnant water which usually are some of the corners of a fish tank.

The fungus may also develop in the dead spots inside filters that aren’t being cleaned often enough. 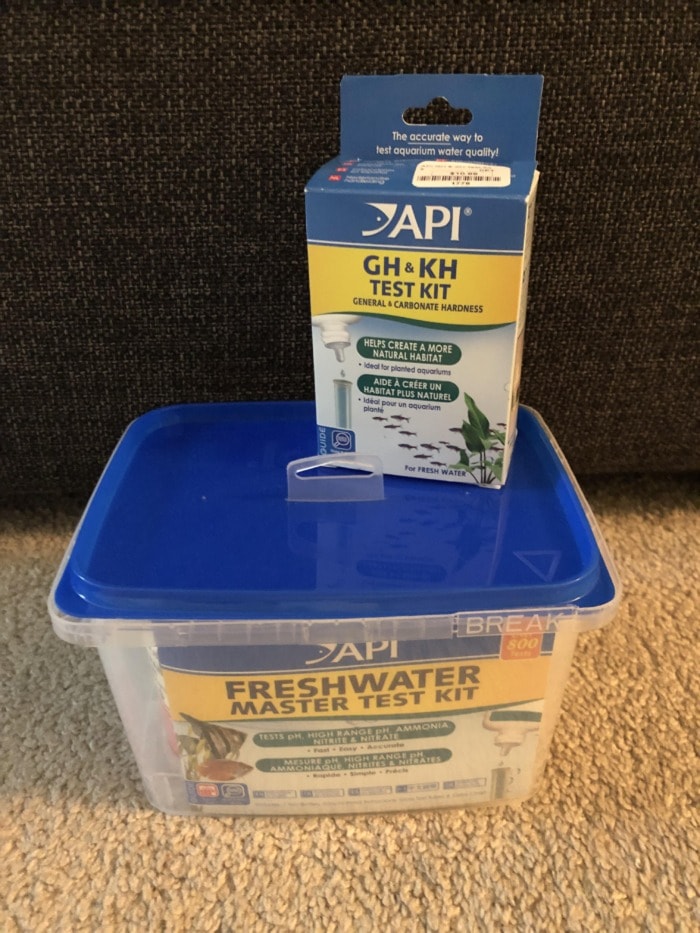 Saprolegnia fungus thrives in lower water pH. You can use an aquarium test kit of some sort to check your water parameters and see whether you need to increase the alkalinity. Fungus can survive in waters with pH of 7, but if your pH is 6.5 or lower, the white fuzz will spread much faster.

However, I recommend trying all the other methods for fungus removal I’m about to list below before attempting to tweak your aquarium’s pH.

Dead fish in the aquarium

If a fish has died in your new aquarium you should remove it right away because fungi and bacteria will start colonizing its body almost immediately. Moreover, a dead fish can cause a spike in ammonia levels in the water. If ammonia builds up and is not lowered in time it can become lethal to the remaining live fish inside your tank. 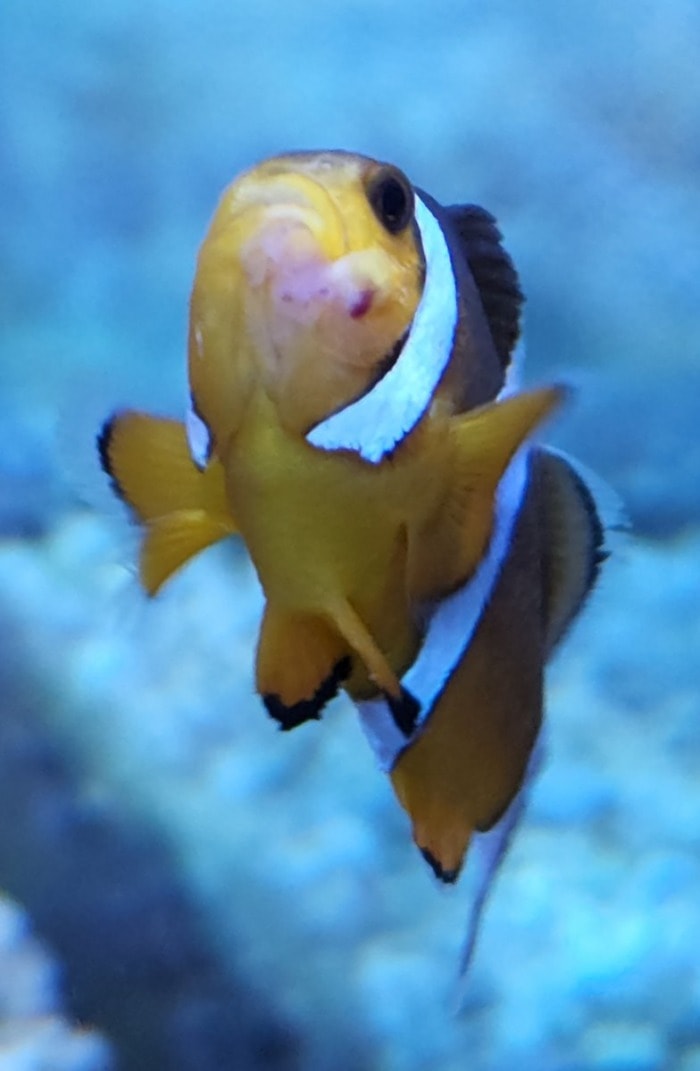 Fungus in the aquarium is also promoted if there are fish with open wounds or other injuries inside. Furhtermore, Saprolegnia propagules would often adhere to injured, stressed-out fish, which can cause subsequent infection that can become lethal.

How to get rid of the fuzzy growth?

The white fungus would often disappear naturally, and therefore many experienced aquarists know they shouldn’t do anything special to get rid of it.

Nevertheless, there are ways to speed up the process.

Furthermore, if the molds are spreading rapidly and are taking over your tank, you need to do something about them.

So here’s how to get rid of water molds in your fish tank:

Other than that, you should also check your water’s pH and see if it’s too low.

Most freshwater aquatic molds thrive at lower pH, so increasing your water’s alkalinity will help you get rid of the stuff quicker.

This does not apply to saltwater aquariums where the pH is usually high, however.

Depending on the condition of your tank, performing only one of the aforementioned steps may be sufficient to rid the system of water molds.

With that being said, if the pollution is too severe, it will take a while for the fungus to completely go away.

You shouldn’t get stressed out if you notice that your aquarium harbors white fuzz.

With that being said, if you aren’t putting enough effort to take care of the ecosystem inside, water molds may quickly spread in your fish tank.

I hope that you found this article helpful.

Leave me a comment below if you have any questions!