Are you fed up with the never-ending algal growth and debris polluting your aquarium?

Well, so was I, until I included some freshwater fish that helped me clean the bottom and decor pieces in my tank.

Even though these fish did solve my problem, it would have been better to prevent the fouling and consequent algal blooms from happening in the first place.

I’ll explain how you can do this in detail, but let’s first take a look at the best cleaner fish that will help sanitize your aquarium.

10 Freshwater Fish That Will Clean Your Tank

There are chemicals you can use to remove the algae from your tank, but they’re not the most elegant solution. Sure, they will have an immediate effect, but you’ll have to deal with another algae bloom in the future because the underlying issue will be unresolved.

Cleaner fish, on the other hand, will not only put an end to your short-term turmoil but will also prevent algae and debris buildups in the future.

Here are the best freshwater fish for keeping an aquarium clean: 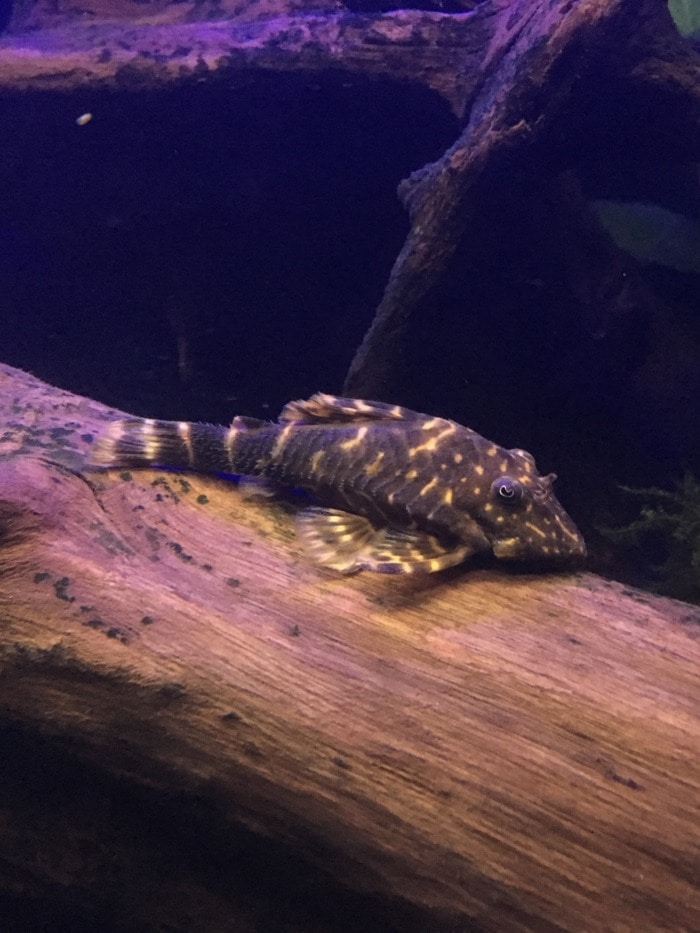 The Clown Pleco fish, also known as Panaqolus maccus, is a peaceful bottom dweller that enjoys snacking on algae.

The average size of these fish is about 3.5 inches, but they can grow up to 4 inches on rare occasions.

Even though these fish don’t need a ton of space, it’s better to keep them in a larger aquarium if you can afford it.

Apart from the algae they eat, these plecos have some peculiar dietary preferences.

Unlike other fish species, Clown plecos seem to perceive driftwood as a form of food, rather than decoration. If you can find some driftwood for their tank, they will waste no time, and try to munch on it whenever they find an opportunity!

In fact, it’s actually recommended to have several types of wood in a tank with a Clown Pleco to support the fish’s diet.

Another great thing about these fish is their nonchalant nature.

They will rarely if ever acknowledge the existence of other fish in the tank. 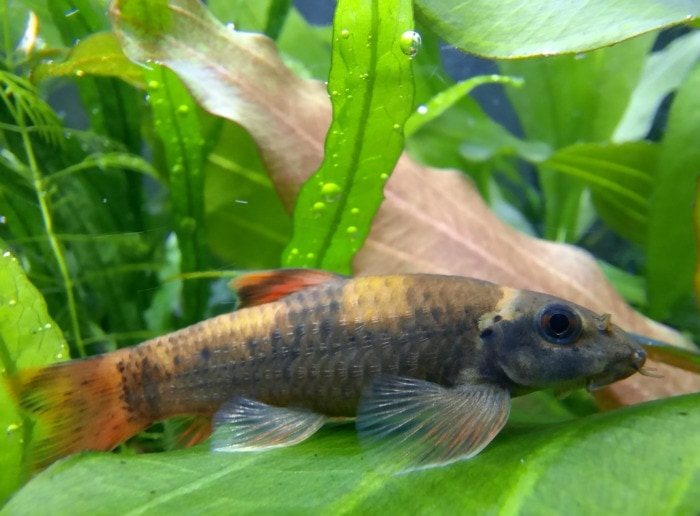 If you’re looking for an active and friendly fish to keep your tank clean, then look no further than the Garra flavata. These feisty little fish are peaceful most of the time, but their intense personalities can sometimes get them into scuffles.

Panda Garras are great at clearing up algal growth.

Depending on its severity, you’ll need between one and five of these guys to get the job done.

These fish need a tank size of about 20 gallons so they can freely express their lively nature, without bothering any of their tank mates.

They are not large fish and tend to only grow to about 4 inches at the most. Their unique personalities and sanitary habits make them a valuable member of any community aquarium. 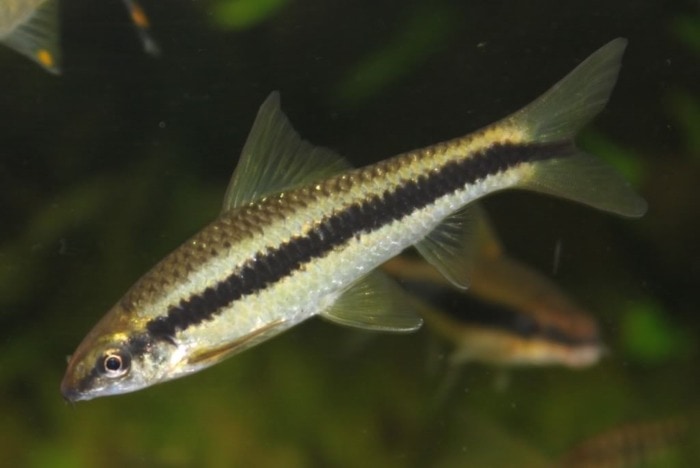 Siamese algae eaters (Crossocheilus siamensis) are a great addition for anyone who’s looking to minimize the algae growth in their aquarium.

With an adult size of 6 inches, these aptly named fish are the largest fish mentioned thus far.

Their size and insatiable appetite for algae and moss make them ideal for bigger tanks that are in desperate need of a cleanup.

Siamese algae eaters don’t have a swim bladder that can keep them floating so they spend most of their time hovering over the bottom.

As a result, they require softer substrates that won’t scratch their skin. For this purpose, I recommend using substrates such as sand or aqua soils.

Although they get along well with other types of fish, there is always the possibility of fights if the space is not adequate. 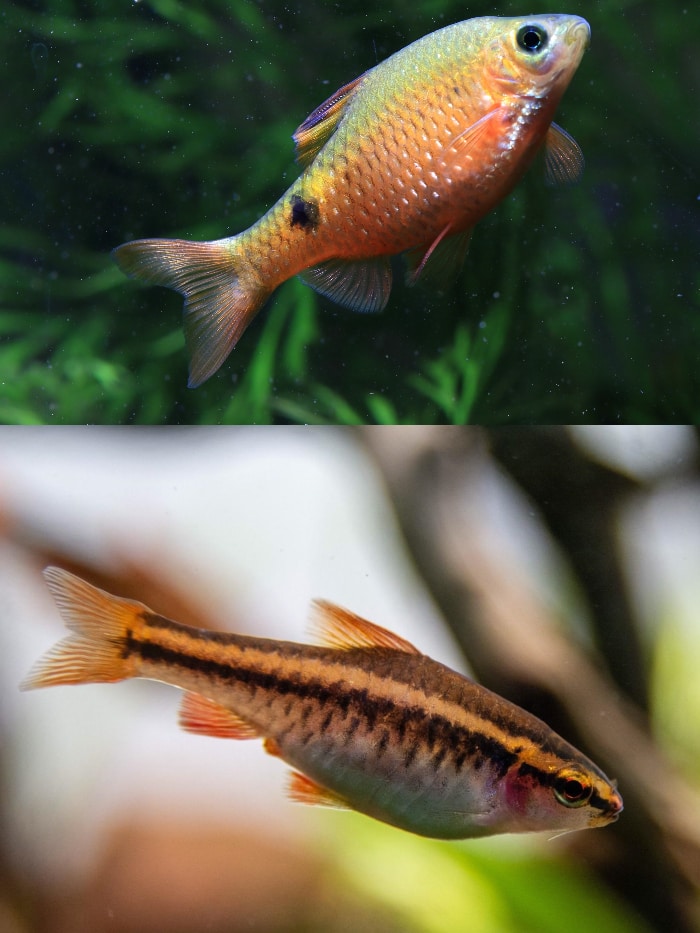 Cherry barbs, also known as Pethia conchonius are some of the smallest cleaning fish on this list with an adult size of only 2 inches.

Due to their small stature, Cherry barbs are more reserved and tend to shy away from others, so keeping them in a planted tank is a good idea.

Rosy barbs are bulkier than their scarlet cousins but are just as efficient at cleaning up messes.

They are also a bit more hardy and can handle colder temperatures than most other tropical fish. Rosy and cherry barbs are peaceful schooling fish, so a tank size of about 30 gallons is necessary to ensure you can include at least 5-6 of them at a time. 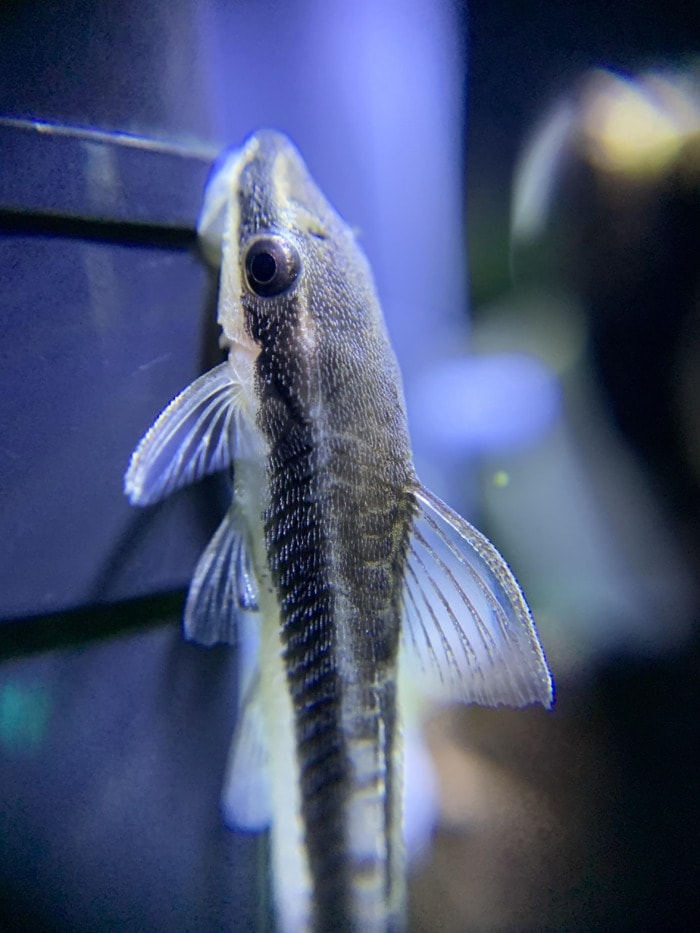 Pygmy suckermouths (Otocinclus affinis) are schooling fish with an inclination towards cleanliness.

With a minute size of only 2 inches, these fish can clean even the hardest spots to reach.

Even though they need to be kept in groups of at least 5, Pygmy suckermouths don’t take up a lot of space, so a 20-gallon tank should work just fine.

These tiny janitors are friendly by nature, so you won’t have to worry about any fights breaking out in your tank.

They do however prefer to be in the company of other like-minded species such as guppies and goldfish. 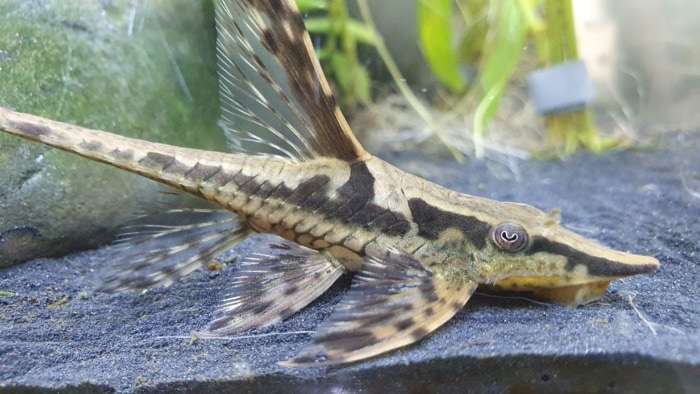 The royal whiptail catfish (Sturisoma panamense) is another bottom dweller that will scrub your tank clean.

Algae is a staple food in their diet, so these fish should be really helpful in suppressing its growth in your aquarium.

These fish aren’t small by any means and need at least 30 gallons of water to roam about undisturbed. Regardless of their size, however, they are quite calm and can freely interact with other docile fish, like dwarf cichlids.

In fact, you may mistake their peacefulness for lethargy as you’ll often find them idly sitting at the bottom of your tank. 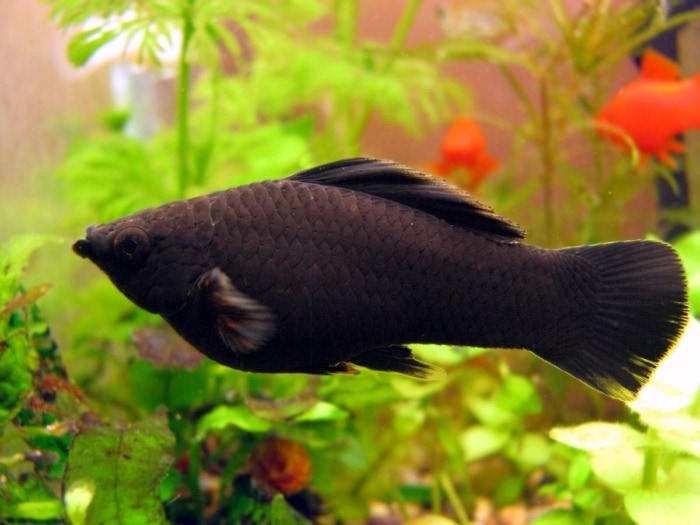 True Black Mollies, also known as Poecilia sphenops, have voracious appetites, so you should make sure your tank can handle their high bioload.

In case it does, then their insatiable hunger will be an invaluable aid in the battle against algae.

If you want to enjoy the benefits of these dark-colored fish, then you should provide them with at least 20 gallons of water.

Thankfully, Black Mollies are peaceful, so you won’t have to worry about them causing problems to the other inhabitants of your tank.

Even though they’re generally calm, Black Mollies can easily get stressed if there aren’t any plants to provide them cover.

Including fast-growing, surface-level plants will help them overcome their anxiety and feel at ease.

Author’s note: True Black Mollies reproduce each month so they should be kept at a ratio of at least 2 females per one male. 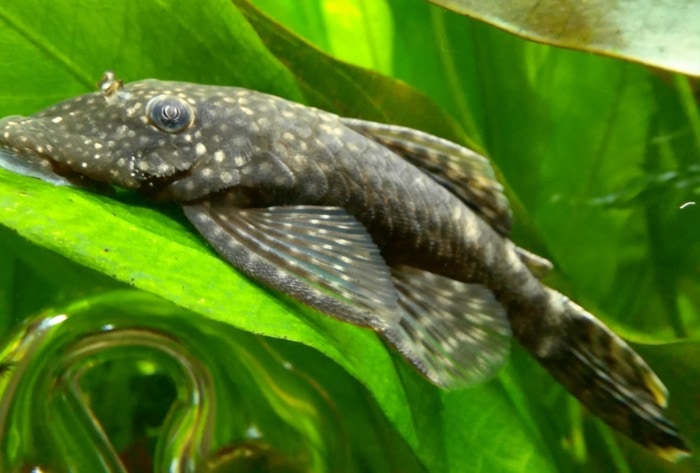 The Bristlenose pleco from the Ancistrus genus likes to take long strolls on the bottom of its tank while scavenging for leftover food and algae that it can get its fins on. As adults, Bristlenose plecos reach a whopping size of 6 inches from front to back.

Unsurprisingly, a fish of this size produces a lot of waste, which means you’ll need at least a 30-gallon tank so the byproducts of their vast appetite are cycled properly.

Even though these types of fish are peaceful by nature, you shouldn’t place them with species that may outcompete them for food.

In my opinion, it’s best to get a mixture of freshwater fish that dwell in multiple levels of the tank to avoid altercations.

Author’s note: Bristlenose plecos can survive in a wide range of water temperatures, which makes them suitable for both cold water and tropical fish tanks. 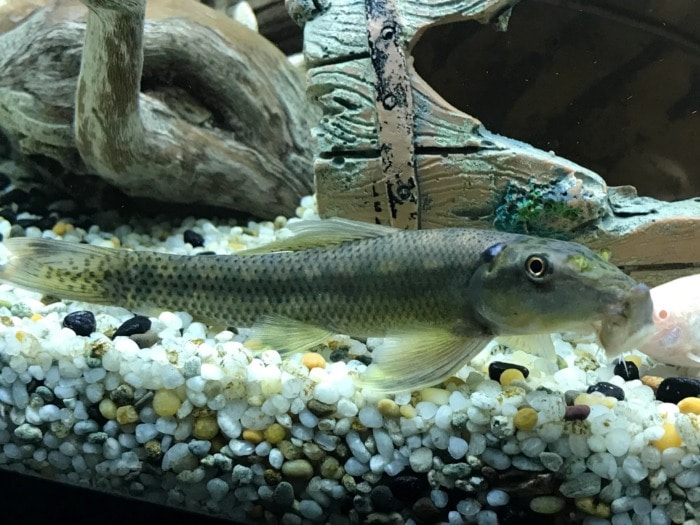 The juvenile Chinese algae eater, also known as Gyrinocheilus aymonieri, is the biggest fish on this list with an adult size of 12 inches.

Unlike the other fish on this list, the Chinese algae eater can be aggressive to other fish species, so you should carefully research its tank mates beforehand.

If you’re a beginner in the hobby stay away from this fish.

Anyhow, Chinese Algae Eaters require a 30-gallon aquarium as a minimum, but it’s better to keep them in a larger tank.

This will give them more space to roam and will reduce the likelihood of an altercation as a result.

Try and include some sand and gravel at the lower levels to help these bottom feeders be more comfortable.

You will often find them sucking on rocks and glass within the tank.

Contrary to what you may believe, they’re not practicing their mating skills but feeding on algae instead.

As a final note, you should pay close attention to these sly fish as they are accomplished escape artists.

Making sure your aquarium is properly sealed is the best way to avoid an aquatic prison break. 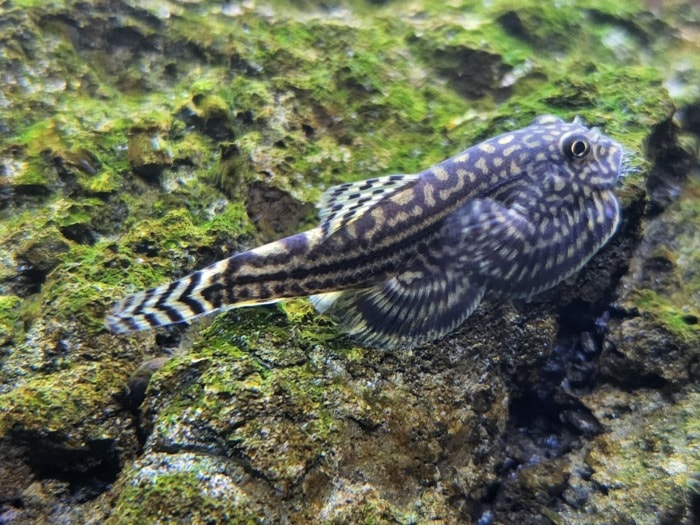 The final entry in this list is the unique-looking Hillstream Loach (Sewellia lineolata), which is about 3 inches in size.

This stingray look-alike needs a tank size of about 55 gallons, which may seem shocking for such a small fish, but there’s a good reason.

The hillstream loach is native to fast-moving streams and needs a lot of oxygen as a result. If there is not a sufficient amount of water flow and oxygen in your aquarium, they won’t survive for long.

What’s more, they are a subtropical fish species and as such won’t be compatible with the more popular tropical fish in the hobby.

Investing in a water pump will ensure your loach has the best chance of survival.

Hillstream Loaches are very calm and typically get along with most other freshwater species.

They spend the majority of their time stuck to the side of the glass, which can be pretty amusing.

Are there any other algae eaters besides aquarium fish?

If you want to add some diversity to your tank, then you might want to look into other aquatic animals that can assist in the cleaning of algae and debris.

Depending on the type of fish you have and how much algae you’re looking to clear up, animals like the ghost shrimp, mystery snails, and nerite snails can be integral members of your aquarium clean-up crew. 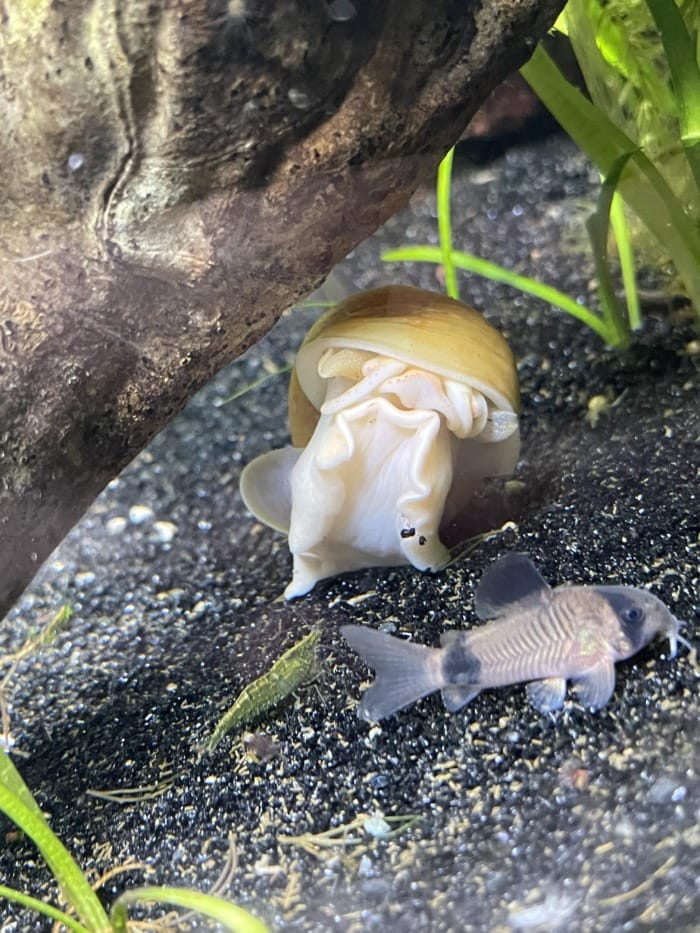 How to prevent algae and pollution in your aquarium?

In my experience, algae growth isn’t completely avoidable, but there are things you can do to manage and prevent it.

Multiple forms of algae ranging from green, brown, and spot grow in different places in the tank.

All of these are microorganisms that require organic matter and light in order to grow.

As such, the best things you can do to minimize the risk of algal growth are to control the amount of light your tank gets exposed to and how much food your fish eat.

If any of these two factors go out of balance, then the algae will take advantage of the situation and start replicating.

Another thing that will help maintain your tank clean is regular water changes. Doing weekly water changes of 15 to 20 percent of the water will clear up the nitrate build up and stunt algae growth.

Having the right types of fish and plants can help to prevent algae and pollution before they get worse.

Both of these things, plus chemical use can serve as effective algae controls for your aquarium, but the use of animals is a more natural way of maintaining things.

The use of freshwater cleaning fish in an aquarium is a very practical and convenient way to maintain the cleanliness of your tank.

Sure, there are other ways to keep algae from overgrowing, but none of them achieve any lasting results.

By using a clean-up crew, you keep the algae in your aquarium at bay for the long run.