A while back, after taking a look at my beloved aquarium, I got quite concerned as I witnessed an unusual sight.

I noticed some foam on its surface, and I couldn’t tell why there are tiny bubbles in my fish tank.

I wondered whether they could be an indication of something bad happening in the water column and if it can harm my aquatic pets.

The little air bubbles would sometimes appear on the aquarium glass after a water change, but they would usually dissipate in a short while.

This time they remained at the top, forming some sort of shiny foam that I later discovered was protein film. Luckily, I researched and found out what causes microbubbles to appear in aquariums and how to get rid of them.

Why are there bubbles in my aquarium?

Actually, in fish tanks, bubbles form for many reasons and most of them aren’t cause for concern.

A few common yet benign ones are:

There are even more reasons you may be witnessing this aquarium phenomenon without it being a sign that something’s wrong.

I will explain them in detail below.

With that being said, in some cases, the bubbles may form foam in your aquarium.

This may indicate that you need to take a closer look at the water’s quality.

Here’s the reason behind bubbles that appear in your fish tank when they can signal a bad thing:

If there are foamy bubbles covering the surface of your aquarium and they’re not popping, then they’re likely caused by organic waste in the water column. The protein from degrading fish feces, uneaten food, and other decaying organic matter attaches to the tiny air bubbles and creates a protein film around them.

In the following sections I’ll thoroughly go over:

1. Organic waste in the water column 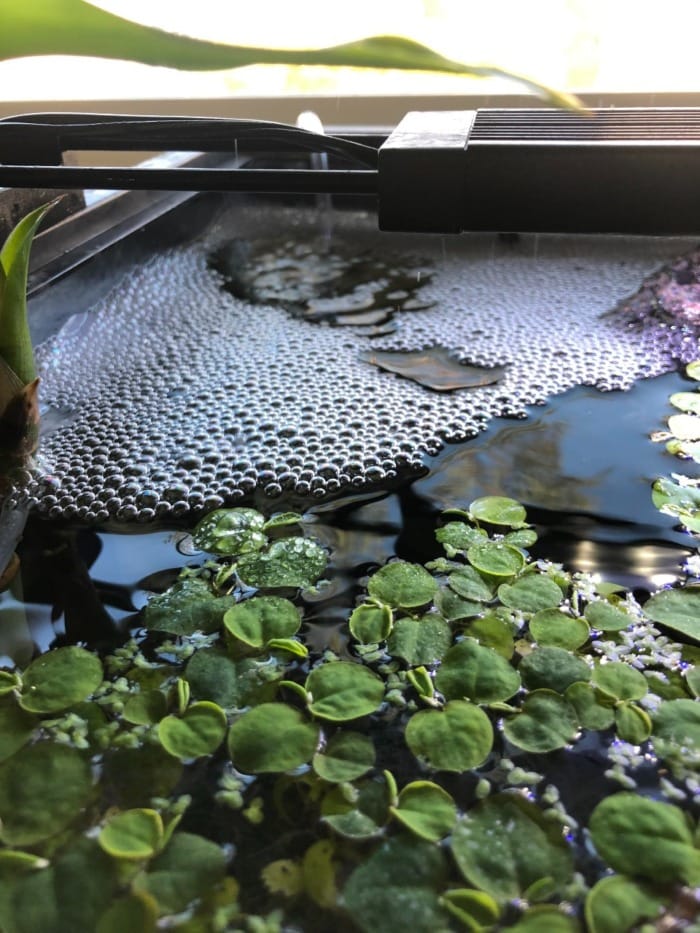 Decaying organic matter in an aquarium is typically the byproduct of:

This matter often gets attached to the surface of the air bubbles in your aquarium water, creating a stable film that traps the oxygen. This occurrence is more prevalent in saltwater aquariums, but can also appear in freshwater fish tanks.

You can get rid of the bubble cover by increasing the water surface’s agitation.

This is basically making the water move more.

If you have a saltwater aquarium, you could also use a dedicated protein skimmer to remove the proteins and oils from the water column.

Nevertheless, if the protein film still covers the top of your aquarium, you should use your water test kit to measure the ammonia and nitrite levels.

If the microbubbles don’t dissipate and the foam covers the water surface, this may be a sign that there aren’t enough beneficial bacteria to handle the accumulated organic waste.

If your water test shows that the ammonia and nitrite readings are above 0 ppm (parts per million), you should take measures to lower them.

To do so, you can perform partial water changes.

Changing water can bring the toxic ammonia in an aquarium down to the desired levels and help you get rid of the microbubbles for good. The same method can be used to lower Nitrite levels, but if that doesn’t help visit the links to learn about other ways to do so.

Author’s note: Protein foam often forms in new fish tanks where the Nitrogen cycle is not complete. This is also typically in tiny fishbowls since waste can build way more quickly in smaller aquariums.

2. Release of saturated oxygen after a water change 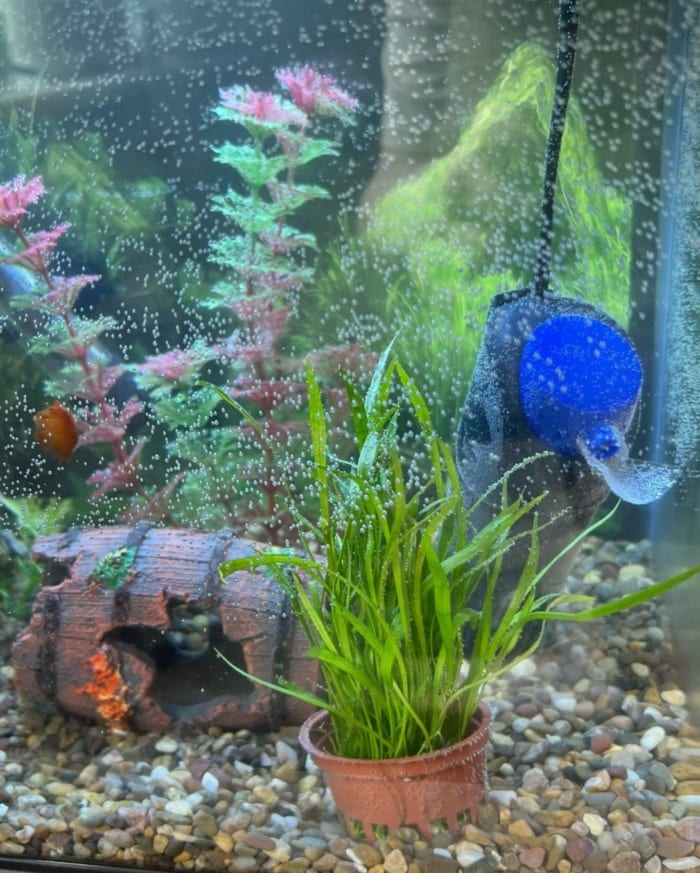 Sometimes you may see tiny air bubbles on the decor or the glass walls of your fish tank after a water change.

This is likely due to the temperature equalization between the new water and the aquarium’s water.

Once the new water’s temperature rises after adding it to the aquarium, the oxygen gets released, creating microbubbles.

Most of the time you shouldn’t get concerned over this, as it’s totally natural.

Pouring cold water in your aquarium is not recommended but the little bubbles themselves will go away in a short while.

To make them pop faster, you can increase the agitation, which will push them to the top of the aquarium and make them dissipate.

Author’s note: In some instances the quick gas release could be dangerous to your aquatic pets. This happens if you’re performing a larger water change without taking precautions.

The more intense gas release could cause a formation of bubbles in your fish’s eyes, blood, and fins. This is known as Gas Bubble Trauma, which is sometimes the reason why fish die or get stressed after a water change.

Therefore, I recommend always making sure everything is in check if you’re changing more than 30% of the aquarium’s water.

Another way to protect your fish from the potentially harmful bubbles is to stir the water before adding it to their tank.

3. Contamination with chemicals from detergents

Chemicals from cleaning detergents may find their way into the aquarium water by accident.

The result is foamy bubbles on the top of the tank.

These substances could be dangerous to your fish, invertebrates, and plants.

One scenario is your tank not having a lid and you using aerosol disinfectants or detergents near it.

Some of the products may enter the aquarium water and create a shiny foam layer with a rainbow tint. The same can happen if during regular aquarium maintenance you use cleaning tools that have already been used for other cleaning purposes.

If you have doubts that cleaning detergents are behind the formation of the little bubbles in your fish tank, you should immediately perform a water change. 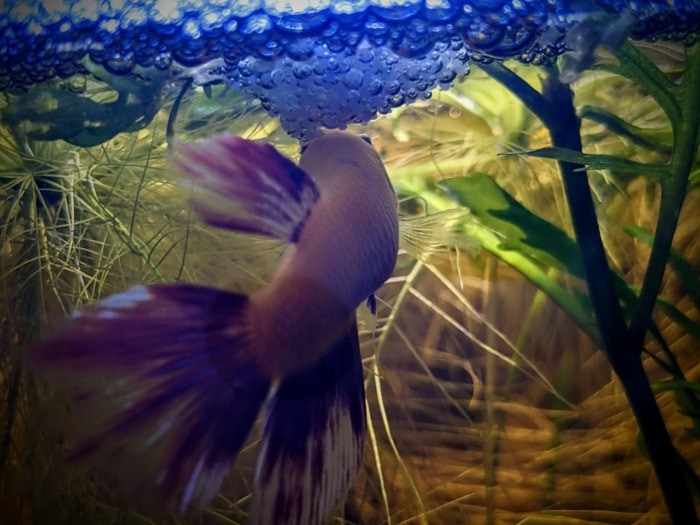 Some fish species, such as bettas and gouramis, build bubble nests as part of their breeding ritual. The fish blows tiny air bubbles covered in special saliva which then form a mat on the water’s surface and do not pop easily.

This behavior is completely natural and signifies that your pet fish is ready to mate.

Male bettas would usually construct their nests around or underneath plant leaves near the top of the tank. This is because tall or floating plants give Betta fish a feeling of safety.

Even though bubble nests are made by male specimens, you may also see tiny bubbles in tanks with female betta fish. That’s because all Siamese fighting fish have what’s called “labyrinth” lungs.

This type of lung lets them breathe oxygen directly from the surface of the fish tank.

The gulp of air that the Betta takes at the top of the tank may cause little oxygen bubbles to form there, which is not a bad thing. 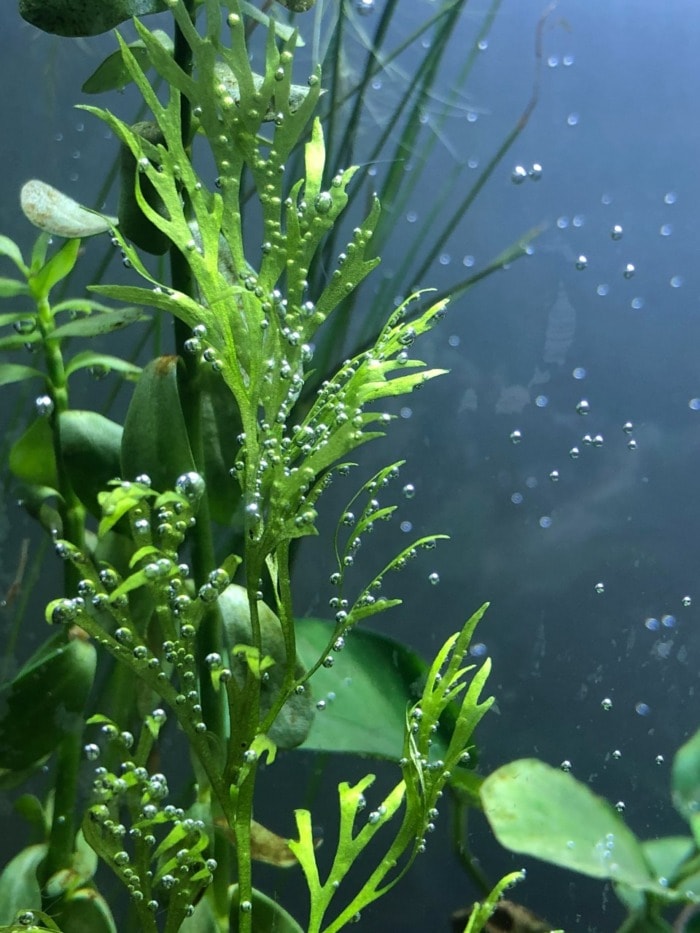 If you’re keeping aquatic plants in your fish tank, you may notice that white bubbles are forming on the surface of their leaves.

This is a completely natural process, known as plant pearling.

It’s a result of photosynthesis and is due to oxygen release. Since the water in the tank isn’t capable of holding all the oxygen produced within it, tiny bubbles would start appearing on your plants and floating to the water surface.

This isn’t a cause for concern and won’t harm your aquatic inhabitants.

Quite the opposite – it indicates that your plants are thriving and there’s a lot of saturated oxygen around them.

Microbubbles are often formed by too much water agitation and sometimes to the point where the water looks cloudy. Agitation following a cleaning or other aquarium maintenance is one scenario.

On the other hand, the bubbles could also appear near a powerful canister filter, or as a result of a working airstone. In these cases, a newly-formed bubble would rise to the top of the tank and quickly dissipate in the air.

With that being said, setting your air pump or aquarium filter to work at their maximum capacity may create too much unnecessary water agitation. Even though aeration is beneficial to a fish tank, it doesn’t need too much of it.

Furthermore, some aquatic pets may get a bit stressed if there’s too much movement in the water column.

Conversely, not enough movement in the water can lead to stagnant areas on the sides of the aquarium where the tiny bubbles could get “stuck”.

In other words, when it comes to setting your filters and aeration units, moderation is key.

You can’t expect an aquarium to not have a few bubbles here and there but too much of anything can become a problem.

I hope that you’ve found my article useful and that you got the answers you were looking for.

If further questions arise, feel free to leave them as a comment in the section below.