Taking care of Nerite snails might be a piece of cake when it comes to their well-being, but do you know what to do with all the tiny white dots that suddenly cover the whole fish tank?

The Nerite snail eggs will keep multiplying and spoiling the inner aesthetics of the aquarium, so you’ll need to find an efficient way for their removal.

Nerite snails are quite adaptive, as they can live and lay eggs in both saline and fresh water. However, the eggs will rarely hatch in freshwater because that’s not the natural reproductive cycle of this type of snail. Nerite larvae prefer brackish water to develop beyond the egg phase and hatch.

Occasionally though, the eggs may hatch in freshwater, but the larvae won’t survive.

A female Nerite snail will keep laying eggs in a freshwater aquarium and they will, in most cases, remain unhatched. From my experience, however, there are several effective methods to deal with this kind of situation.

What to do about unhatched Nerite Snail eggs?

The eggs of a Nerite snail appear as small white ovals and resemble sesame seeds in looks. Technically speaking, these white bumps are not the actual eggs of the snail, but rather tiny capsules that usually hold between 30 and 100 of the actual eggs.

Here’s what the eggs of a Nerite snail look like: 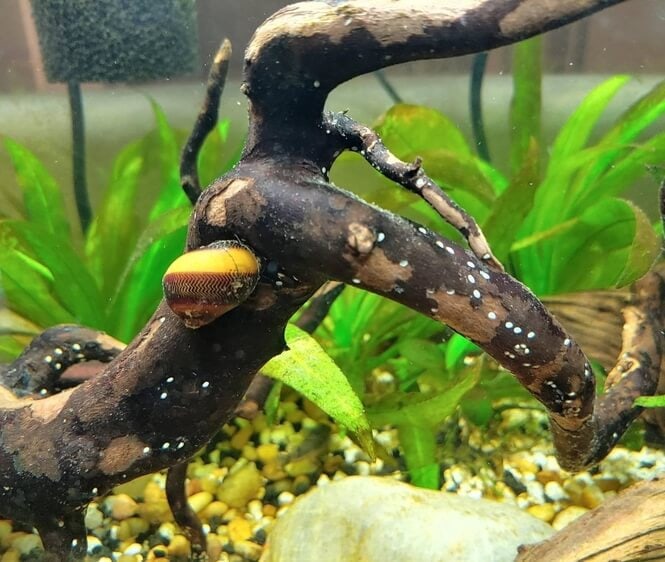 Unlike Mystery snail eggs, the egg capsules of Nerite snails will be scattered all over your tank, and especially on driftwood.

Unfortunately, there’s no known creature that would eat the eggs of a Nerite snail. That being said, to get rid of the unhatched nerite snail eggs you can try the following:

1. Interchange the female snails with male ones. 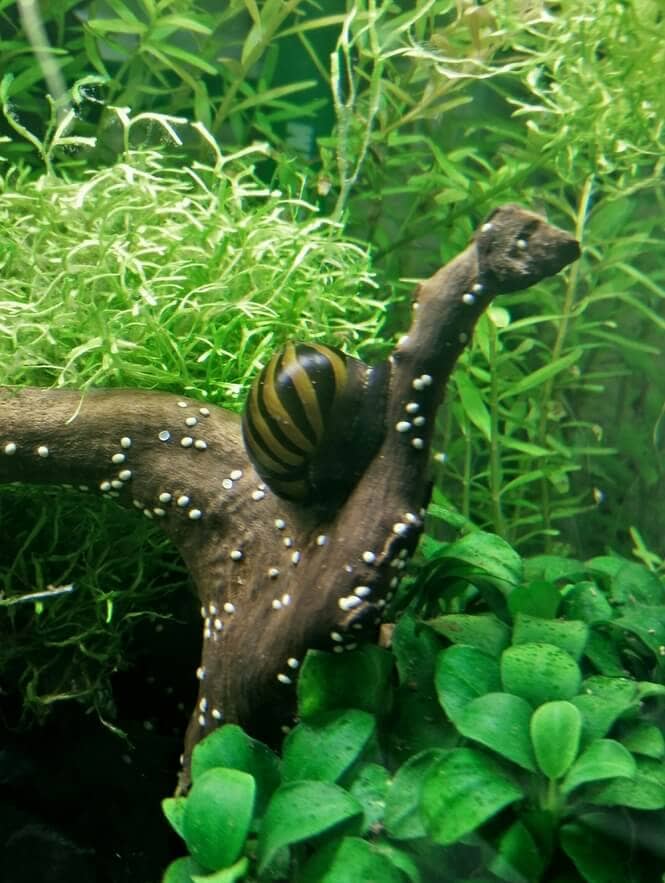 The majority of freshwater snails are hermaphrodite, which means that they will reproduce asexually.

This is the reason most freshwater aquariums get infested with hundreds of snails when an uninvited hitchhiker ends up in the fish tank.

However, asexual reproduction does not apply to Nerite snails.

These types of snails have distinctive males and females, and breeding includes both genders. The female Nerite lays eggs, which need to be fertilized by a male thereafter.

You can, therefore, remove the females and only leave males in the fish tank. 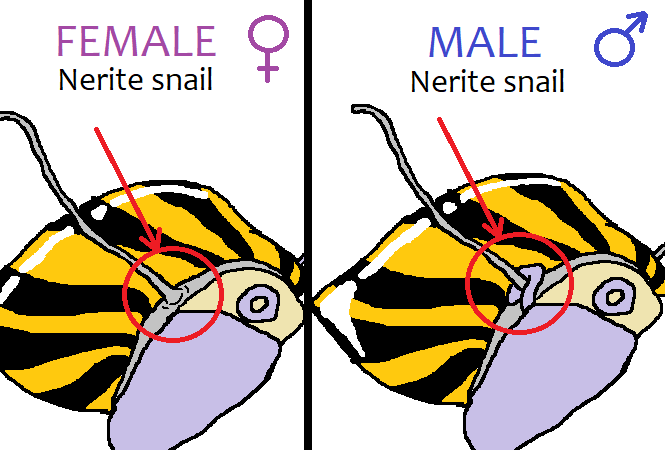 Since spotting the differences may take a long time, I don’t consider it the best method to tell apart Nerite snail genders.

Not all of us have a whole day to stand in front of a fish tank, examining snails with a magnifier.

What worked for me, and I think is the easier way to determine a Nerite snail’s sex, is placing a single one in a 5-gallon bucket and observing if it lays eggs.

It requires some time, but I’ve found it to be a sure way to tell apart the males from the females.

I use the bucket as a “quarantine tank” for new Nerite snails.

If it turns out that a newcomer is a female, I return it and get another one.

Note that for this way of selection to work the Nerite snail must be sexually mature or at least 1 year old.

2. Scrub the eggs with a razor blade. 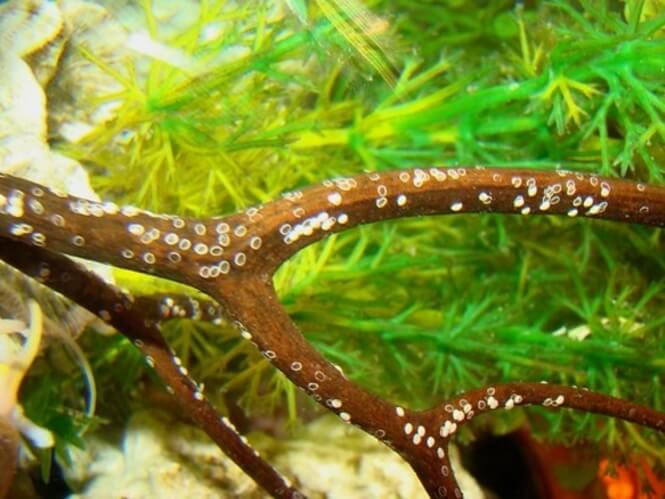 Make sure you are using a new, unused razor blade.

Also, apply moderate pressure when scraping the eggs, because based on my experience, removal can be somewhat difficult.

I find using a spoon the best way to collect fallen eggs.

It’s important that both tools are made of stainless steel as that’s an aquarium-safe material. Another method I’ve seen success with is by using a sharp algae scraper like this one or something similar.

You can also use a toothbrush, a toothpick, or any sharp tool that you think may work best for you.

Just be careful with the eggs on driftwood, because each removed egg will leave an oval trace.

In my experience, it’s nearly impossible to remove a Nerite’s eggs from driftwood without taking off some of the outer layer of wood.

3. Remove the Nerite snails from the fish tank altogether. 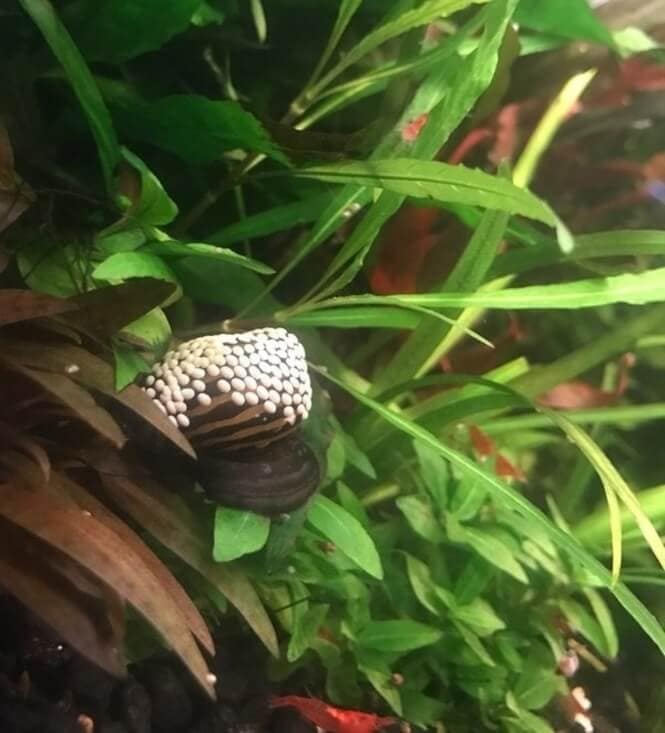 At one point, you may simply lose your motivation to keep trying different tricks for snail egg removal.

In such cases, you can just get rid of all the Nerite snails altogether. Here are a couple of ideas on how to do that:

How to hatch the eggs of a Nerite snail?

There are over 200 Nerite snail types and not all of them are fully researched when it comes to hatching.

Luckily, the majority of Nerite snails sold in pet shops are well-known to science.

If you are interested in seeing your Nerite eggs developing into fully-grown snails, there are some steps to be followed.

That being said, here’s how to hatch the eggs of Nerite snails:

Make sure you use marine salt (do not mistake it for aquarium salt) when preparing the brackish water.

Anyway, use a hydrometer to test the salinity and stop adding salt when the reading (SG or Specific Gravity) shows anything between 1.002 – 1.005.

Alternatively, for step 2, instead of adding the snails to the brackish water, you can move the egg-covered decorations, as they are likely fertilized by the male Nerite snails in the main tank.

Either do not use any filtration system in the brackish water tank or put a sponge on the filter.

This is a preventive measure because once the baby snails are hatched, they will be really tiny and may get sucked by the water filter.

Wait about 3 to 4 weeks for the larvae to become bigger and place them into your original freshwater aquarium.

Avoid having aggressive and carnivorous fish in the freshwater tank, as the small baby snails can easily become prey.

The constant influx of eggs the Nerite snails produce can definitely be bothersome.

In my experience, the most efficient way to benefit from having this snail species is to take time to identify and separate the males from the females.

It may be time-consuming but once you get rid of the female the issue with the eggs will be resolved.

What did you end up doing? What tools did you use to scrape the eggs?

Tell me your story in the comment section below.

19 thoughts on “What to do with Unhatched Nerite Snail Eggs?”