When I first began my fishkeeping journey, I felt overwhelmed by all of the information that I had to learn.

One of the very first lessons I learned back then was how often and how much to feed my aquarium fish.

At first, I thought all I had to do was throw some food in my fish tank and call it a day, but after a short while, I realized that was not the case. Unlike other domestic pets, fish have specific dietary needs that depend on their species. Some species, for instance, require a plant-based diet in order to survive, while others need to eat both plant and animal matter.

These needs along with other factors such as water temperature and size determine how often an aquarium fish should be fed.

After doing my research, I came up with several feeding schedules you can apply according to your fish’s needs.

How Often Should You Feed Your Aquarium Fish?

The feeding schedule of aquarium fish largely depends on the type of food they consume. Herbivorous and omnivorous fish need to be fed two to three small meals every day, whereas carnivorous fish species can go with only one meal a day.

That’s because carnivores have well-defined stomachs where they can store food for longer periods of time. Meat is very nutritious and takes time to break down.

These types of fish can even be fasted for a day or two without concern for their well-being. Carnivorous fish that are bigger and less energetic can go even longer without meals compared to fish that are smaller and more active.

On the other hand, vegetation is low on calories and should be taken in large quantities throughout the day.

This means that herbivorous and omnivorous fish need to constantly forage to be able to sustain their energy levels. The fish species that fall in these categories usually have very long intestines and in some cases, as is with goldfish, they don’t have a defined stomach.

Generally speaking, feeding these carnivorous freshwater fish once a day is adequate:

Herbivorous species must be fed more regularly, but only in little amounts at a time.

With these species, you could go up to three feedings a day, so long as you’re mindful of the quantities.

Ideally, you should provide your herbivores with some vegetation to graze passively on throughout the day.

The vegetation can be anything from vegetables to cultivating algae specifically for them. 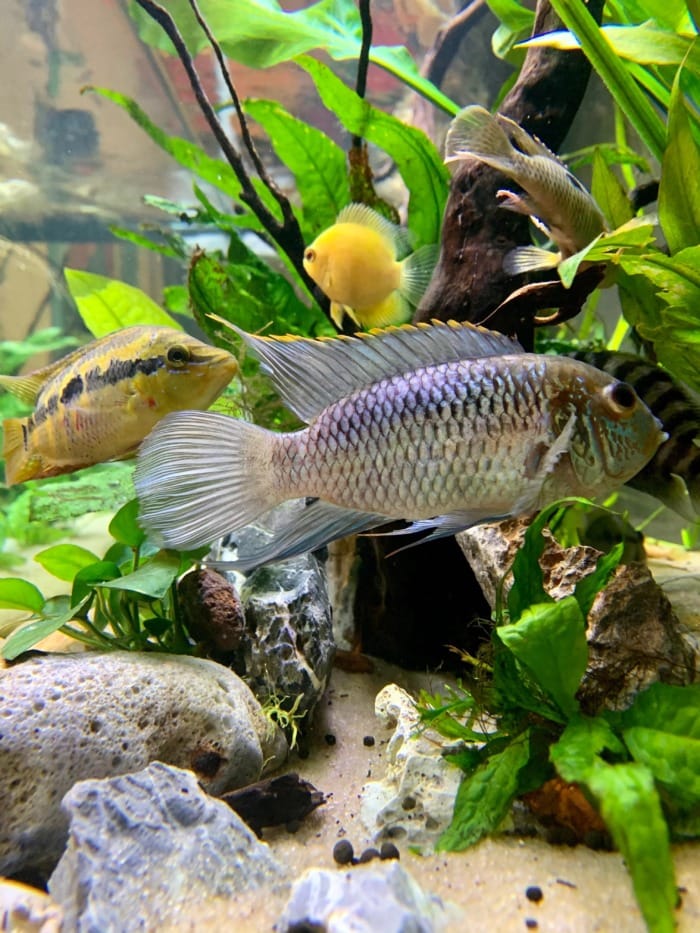 Some of the popular vegetarian fish that are kept in freshwater aquariums are:

Any other fish you may keep is likely omnivorous and would generally benefit from eating twice a day.

Popular omnivorous fish that are not fussy eaters include:

Tiny fish with greater metabolic rates, such as newly hatched fry should be fed more regularly, especially when housed at warmer temperatures.

The metabolism of fish is regulated by water temperature, which also affects how frequently you need to feed them and how much food they require.

On average, tropical aquarium fish need to eat more frequently than coldwater species but not by much.

How Much Food Does an Aquarium Fish Need? 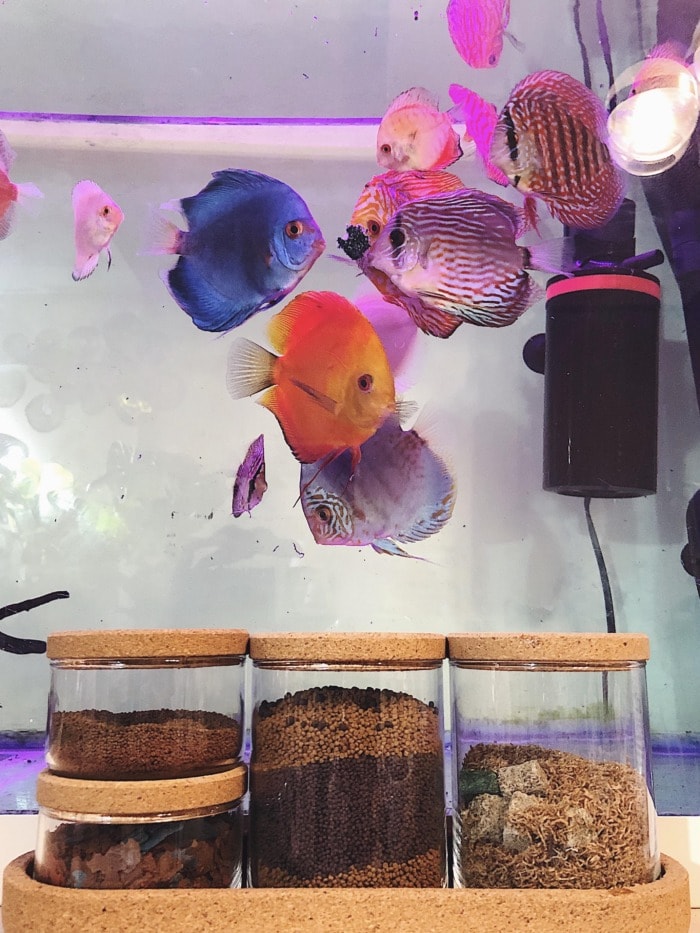 Since every fish is different, figuring out the right amount of food for your pet fish will be a bit of a trial and error.

As a general rule, you should only give your fish as much food as they can consume in about three minutes.

This does not imply that you must attend every meal armed with a whistle and a stopwatch.

Just make sure your new pet eats everything in the allotted three minutes.

The number of flakes or pellets you give to your fish will generally depend on its natural diet:

A small carnivorous Betta, for example, needs 1 to 2 tiny flakes, with the total volume being just about the size of its eyeball. Pellets can be avoided altogether for carnivorous fish because they are too nutrient-dense and dissolve too quickly in the fish’s stomach.

A large goldfish may need a bit more, and should also be fed more often.

Personal advice: I would usually aim to slightly underfeed my fish. I test and see how much they eat for about 3 minutes and then give them a little bit less than that.

Before you go ahead and assume that I’m being cheap – I do this because it prevents overfeeding.

In my experience, overfeeding has much worse consequences than slight underfeeding.

In fact, overfeeding likely is the most common reason beginners “crash” their new tanks and accidentally kill their fish.

I will discuss the dangers of overfeeding after a couple of short paragraphs.

What’s the Best Time of the Day to Feed Your Fish? 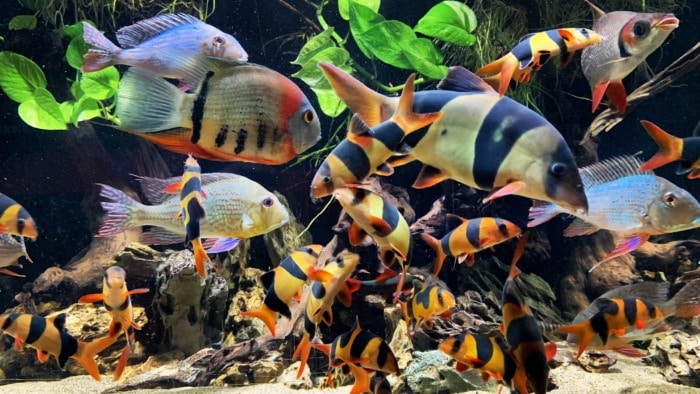 Carnivorous fish in the wild usually hunt for food in the morning and right before it gets dark.

It’s good practice to have the aquarium’s lights on for at least half an hour before offering breakfast.

I recommend feeding such fish during one of those periods.

I usually coordinate that with my personal schedule and offer the food whenever it makes sense to me that day.

Herbivores benefit from being fed in the morning, at lunchtime, and in the evening.

If you’re not fortunate enough to work at home you can feed them a small portion in the morning and evening. Ideally, you’d want to leave a vegetable of some sort for them to nibble on throughout the day when you’re gone.

Omnivorous fish do well when getting fed in the morning and 30 minutes before you turn the aquarium light off.

Nocturnal species including knife fish, catfish, and some plecostomus species could be fed sinking pellets once the fish tank’s lighting is off.

These animals are more active at night and that’s when they actively scavenge for food.

Author’s note: Sometimes fish that are new to their aquarium refuse to eat for a couple of days because of the stress from transportation. Bettas are notorious for this type of behavior and usually send their owners in a state of anxiety at first.

Luckily, this is a self-correcting situation, and the fish starts showing appetite when it settles into its new tank.

For the more timid fish, the adjustment period after being introduced to an aquarium can take as long as a week.

You can try feeding newcomer fish as soon as they arrive but make sure to clean uneaten food if the endeavor wasn’t successful.

In case of a flop, wait for 24 hours and try again.

Problems That Arise With Under- and Overfeeding Pet Fish 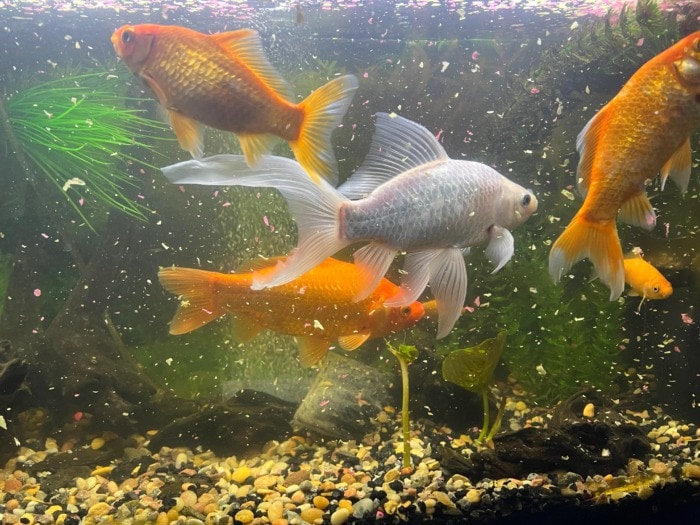 First, overfeeding your fish may cause dangerous alterations in the chemistry of the water.

Fish can become stressed and more susceptible to other ailments due to the harmful breakdown products.

Here’s a simplified list of issues that may all arise thanks to giving your fish more food than they can eat:

If you suspect that you’re overfeeding your pet fish – cut the food volumes while monitoring the water parameters of the aquarium. Use some sort of water test kit to check for the correct ammonia, nitrite, and nitrate levels. 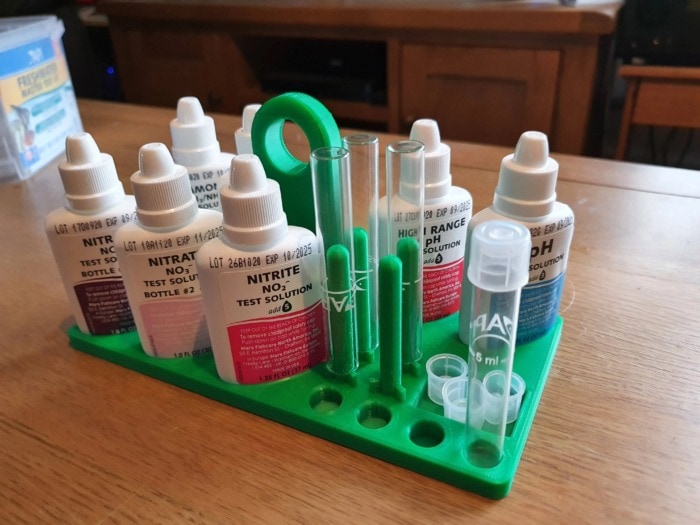 On the other hand, underfeeding fish can weaken their immune system.

That’s especially true for omnivorous and herbivorous species who need a constant supply of food.

Carnivorous fish can be fed every other day without issues, as long as you make sure their meals are nutritious.

Determining how often a pet fish needs to eat is not something complicated.

You just need to read a bit about the particular species you’re keeping and its diet and follow best practices from there on.

Imitating how and what your fish would eat in the wild is what I consider the safest route to a long and happy relationship with your new pet.