This amphibian makes a perfect aquatic pet: it’s intriguing to observe its behavior and it’s pretty easy to take care of.

Nevertheless, the African Clawed Frog (ACF) may sometimes experience significant bloat out of nowhere, leaving you with no clue of the causes. The bloating is likely the result of a condition known as Dropsy. Dropsy impairs the frogs’ ability to properly exchange fluids. 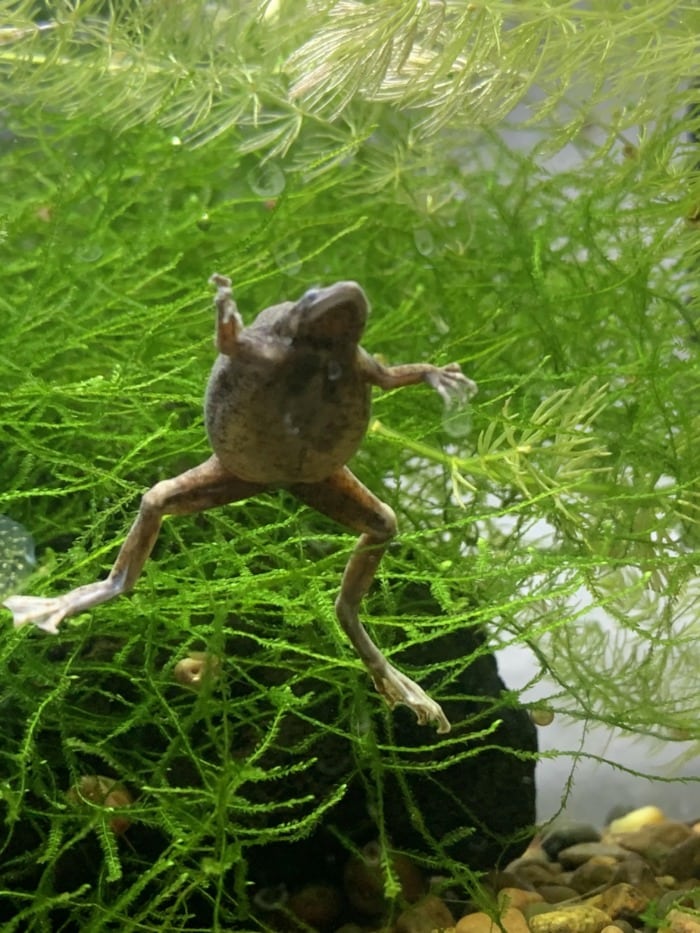 Finding your frog swollen like a balloon and floating in your home aquarium may seem funny at first.

However, your inflated pet is likely suffering a life-threatening illness.

In this article, I’ll go over the main reasons behind an African clawed frog that has become bloated.

Furthermore, I’ll let you know how you can treat your puffy frog’s sickness and save its life.

So let’s dive in!

Why is my African clawed frog bloated?

There are several reasons why your albino or greenish African Clawed Frog may be bloated.

Knowing what made the body of your pet swollen in the first place, will help you prevent it from happening again. The information in this article applies to both the African Clawed Frog (Xenopus laevis) and its smaller cousin from the Hymenochirus genus – the African Dwarf frog.

An African Clawed Frog gets swollen due to a disease that affects its lymphatic system, known as Edema or Dropsy. The illness hinders the natural Osmoregulation of the animal and causes liquid buildup. This condition leads to severe bloating of the frog’s body and limbs.

The frog’s organism is unable to process and discharge the liquids.

The fluids would eventually start to enter the internal organs, which may kill the frog.

Therefore a bloated African Clawed Frog with dropsy should be treated in the early stages of the disease.

An amphibian in such a condition would start acting in unusual ways.

It may stop eating, get moody, or may even stop moving, and simply float weightlessly in the aquarium.

Osmoregulation is the process that controls how much liquids the body of an animal absorbs and how much it releases.

There are several cases where Dropsy affects Osmoregulation in frogs and becomes a problem. 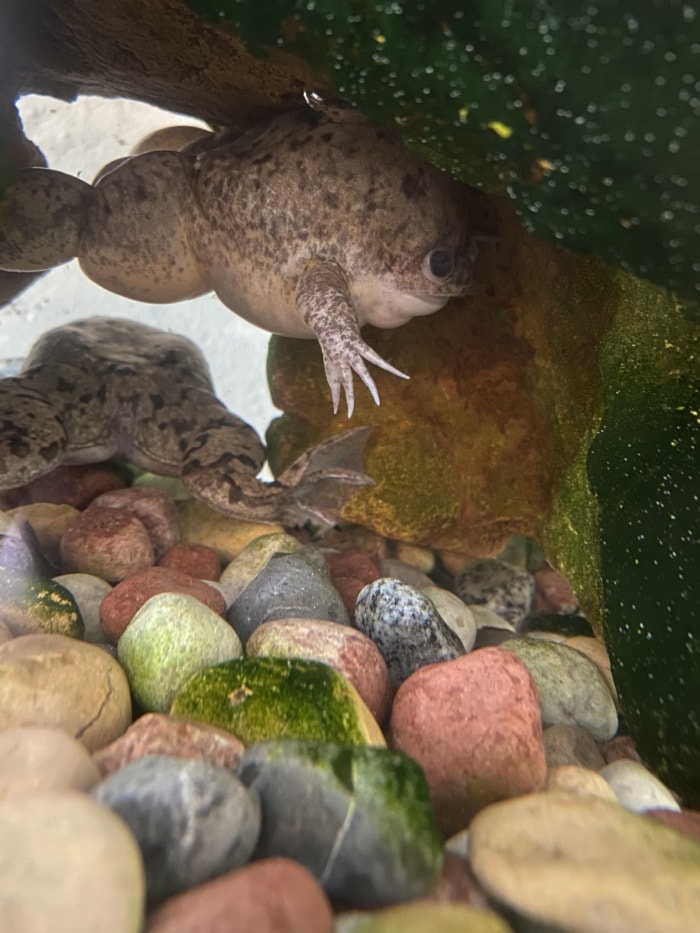 However, it may be hard to determine the exact reason why your aquatic pet may be inflated.

Here are the most common causes of dropsy in African Clawed frogs:

1. The water in the aquarium is too soft

A study I’ve found suggests that keeping your African or Dwarf Clawed frog in water that’s on the soft end for too long can cause issues. Some people mistakenly use distilled water in their frog aquarium, thinking that it’s the purest possible solution.

However, distilled water is the softest type of water out there.

These frogs are naturally adapted to the hard waters of the African Rift Valley, where they come from.

This means that the frog’s internal Osmoregulation is suited to “oppose” the osmotic pressure of hard water.

Keeping your African Clawed frog in the wrong water hardness can potentially damage the mechanism that controls how much liquid its body holds.

Eventually, the mechanism stops working properly and the frog begins to bloat, holding too much water.

Unfortunately, in these cases, full recovery is likely impossible. 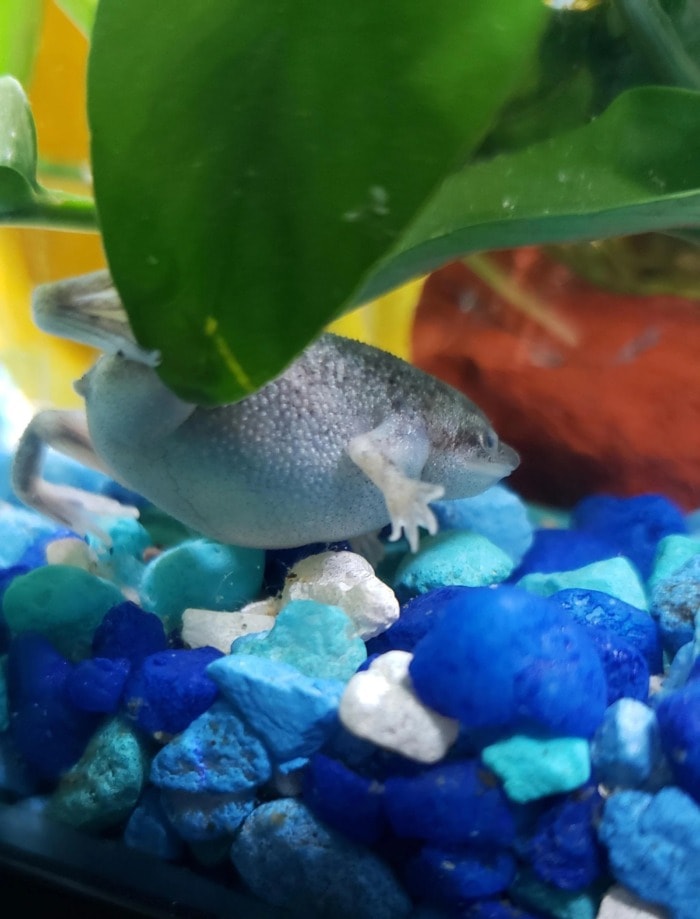 A bloated African Clawed Frog would often have Septicemia, also known as Sepsis.

This is a clinical term for blood poisoning by bacteria.

It’s not known how this condition can lead to bloating.

In this case, it is likely best to take your frog to the vet.

The kidneys are responsible for controlling the liquid exchange in African Clawed frogs, including the Dwarf variety.

Kidney or liver abnormalities and infections can sometimes end up in impaired Osmoregulation for the frog.

The infections may be caused by bacteria and abnormalities by a birth defect.

They absorb it through their skin and rely on that for their electrolyte exchange.

In this case, the frog is no longer able to absorb electrolytes from the large amounts of fluid it takes in.

The electrolytes are expelled with the urine, but the frog holds most of the fluid in its body. 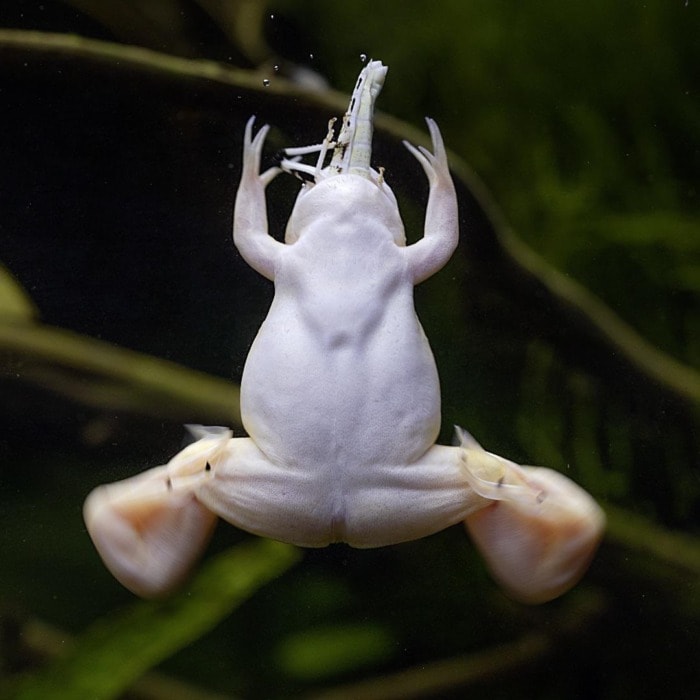 Often caused by overfeeding with heavy foods such as bloodworms or beef heart.

African clawed frogs are carnivores and love meaty foods such as frozen or freeze-dried bloodworms and brine shrimp.

Some owners would also feed their ACF with slices of liver and heart to get them in the mood to breed.

Nevertheless, if you go overboard with these types of food, the metabolism of your pet may suffer damage, resulting in bloat for the frog.

You should mainly feed your African Clawed Frog with commercially prepared pellets and wafers.

Meaty foods should only be an occasional treat.

There are actually two types of swelling in African Clawed Frogs – soft bloat and hard bloat.

If your aquatic frog’s body feels puffy like a water balloon, then you’re dealing with soft bloat.

If the inflamed body of your pet is firm to the touch like the inside of your wrist – then you’re dealing with hard bloat.

While both conditions require immediate treatment, the latter is harder to cure and often leads to death.

Nevertheless, you shouldn’t give up, as it’s not impossible to save your swollen ACF, even if it’s suffering from hard bloat. Of course, your best course of action would be to take your pet frog to the veterinarian. 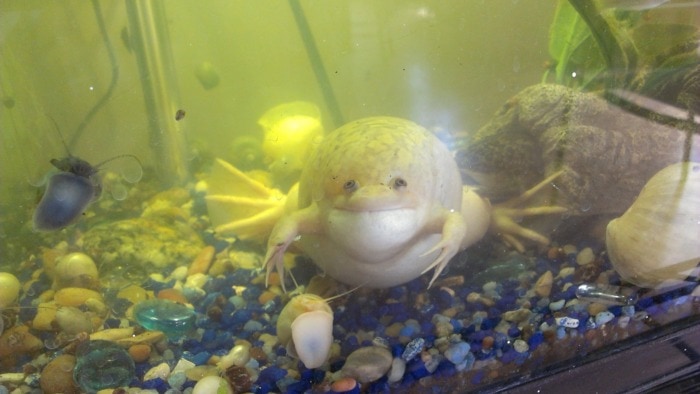 Other than that, you can follow these steps to treat your bloated African Clawed Frog:

While your pet is in a quarantine tank, you can clean your main aquarium thoroughly, including rockwork and decorations, and perform a water change.

You should do this because the bloat of your frog may be caused by a bacterial infection. 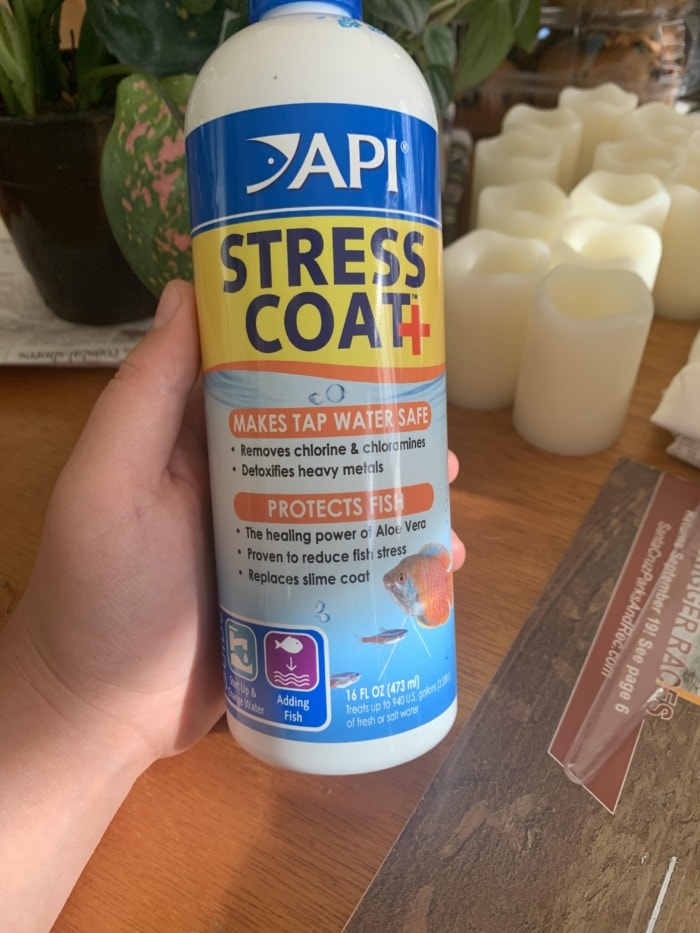 Providing clean water and making sure that the water parameters are in check can prevent future bacterial infections.

Author’s note: Treating frog bloat can take a while. You should be persistent in your effort to cure your swollen pet. If you don’t notice any improvement after 10 to 14 days, your African Clawed Frog may be too sick and unable to beat the disease. If that’s the case it may survive for a couple of weeks to about a year. The sooner you start the treatment – the higher the chance of success.

With all being said, the best approach to treating an African clawed frog with dropsy is to take it to a vet.

The qualified specialist will prescribe the most efficient treatment for your aquatic pet.

Furthermore, if necessary, the veterinarian can drain the bloated ACF by using a needle – a procedure that you shouldn’t try to perform yourself.

A while back a friend of mine called me concerned about her albino African Clawed Frog being bloated and acting weird.

Initially, she was wondering whether her pet could be pregnant with eggs or bloated with dropsy.

Furthermore, a female’s behavior wouldn’t change so drastically if she was carrying eggs.

After I gave her the dropsy treatment tips that I described above, she managed to cure her pet’s disease and it’s alive to this day.

I hope that you found my article helpful.

Leave me a comment below if you have further questions!