Who would’ve thought that watching a Pixar movie would teach you authentic facts about different marine inhabitants.

In this post, I will list the real species of fish from the film Finding Nemo. The famous Nemo, for example, is an actual type of clownfish, and his behavior in the movie is based on real-life traits.

After I figured that out, I went ahead and researched what kind of fishes are Dory, Gill, Deb, and the rest of the main characters.

I will also share with you the names of the scary fish with the light, as well as other secondary characters, such as the buck teeth Kathy and Nemo’s teacher Ray.

So let’s dive in!

17 Popular types of fish from the movie Finding Nemo

I’m assuming some of you are eager to find out what the fish from Finding Nemo is simply out of curiosity.

Others are likely beginner or advanced aquarists who are inspired to start a Nemo-based fish tank with representatives of the species from the movie. For this reason, I made sure to also provide the real-life scientific names of the movie characters.

Moreover, I will give some hints on whether these types of fish can be kept in a home aquarium or not.

This would make your upcoming fish care research easier.

If not – the information here will likely help you solve a crossword clue or two.

Here are the types of fish that the characters from Finding Nemo are based on: 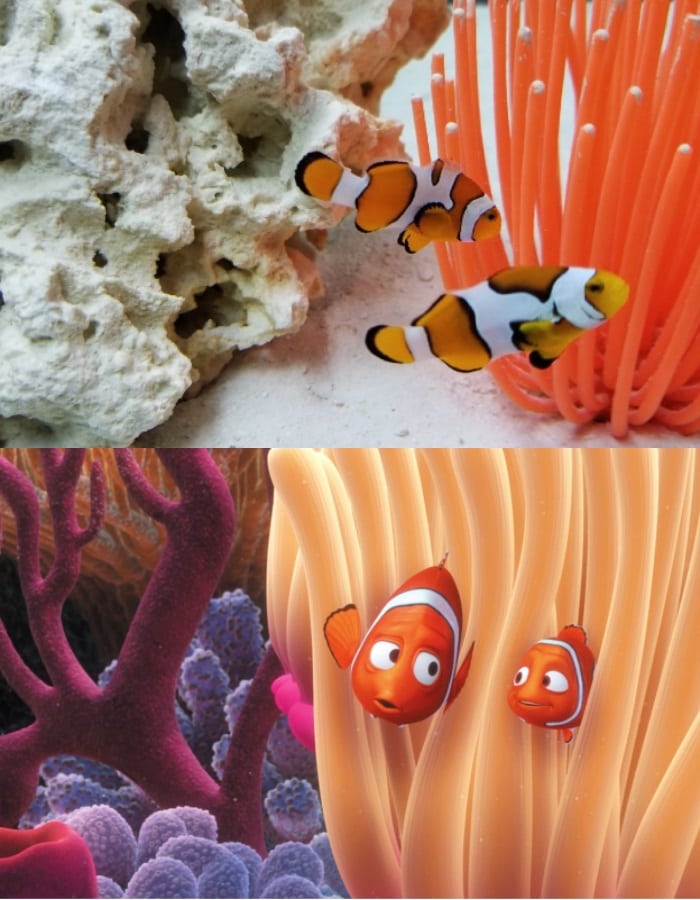 Nemo, as well as his mom and dad – Coral and Marlin – are Ocellaris Clownfish.

These fish have orange bodies, striked by three white stripes with black outlining.

The Ocellaris Clownfish are quite common in the aquarium hobby. Unlike other types of clownfish that can be territorial and aggressive, the Ocellaris is rather peaceful and easy to take care of.

That’s why many beginner aquarium keepers would try to get one of these saltwater fish, after seeing them in the movie.

Anyway, a few scenes show some key traits of the Clownfish species.

Finding Nemo begins with Marlin and Carol, discussing their new home – a Sea Anemone. Clownfish actually form a simbiotic relationship with some types of anemones.

Author’s note: Sea anemones are close relatives to corals and jellyfish that have stinging polyps which are dangerous to fish. Nevertheless, through a process called acclimation, clownfish can adapt to their host anemone and live in it.

When Marlin asks Nemo to brush onto their anemone’s polyps, he’s encouraging him to acclimate, so that his son doesn’t feel the stings in the future.

These small details in Finding Nemo are among the scenes that can help you learn interesting facts about the fish species the characters are based upon. 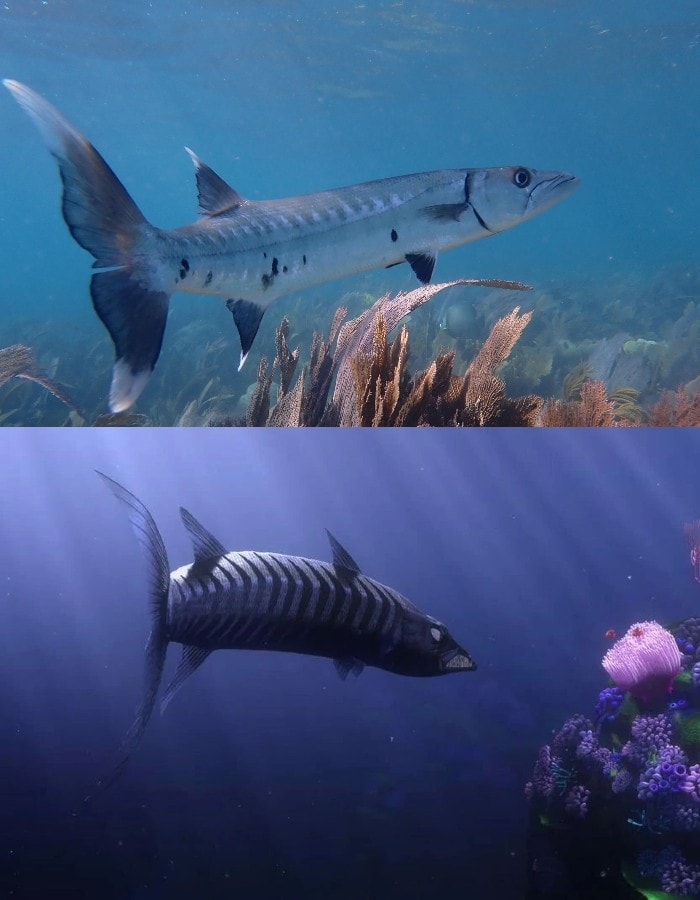 The big scary fish that appears at the beginning of the movie and kills Nemo’s mom and her babies is a Barracuda.

The Barracuda is a saltwater carnivore with powerful jaws and a large narrow body. 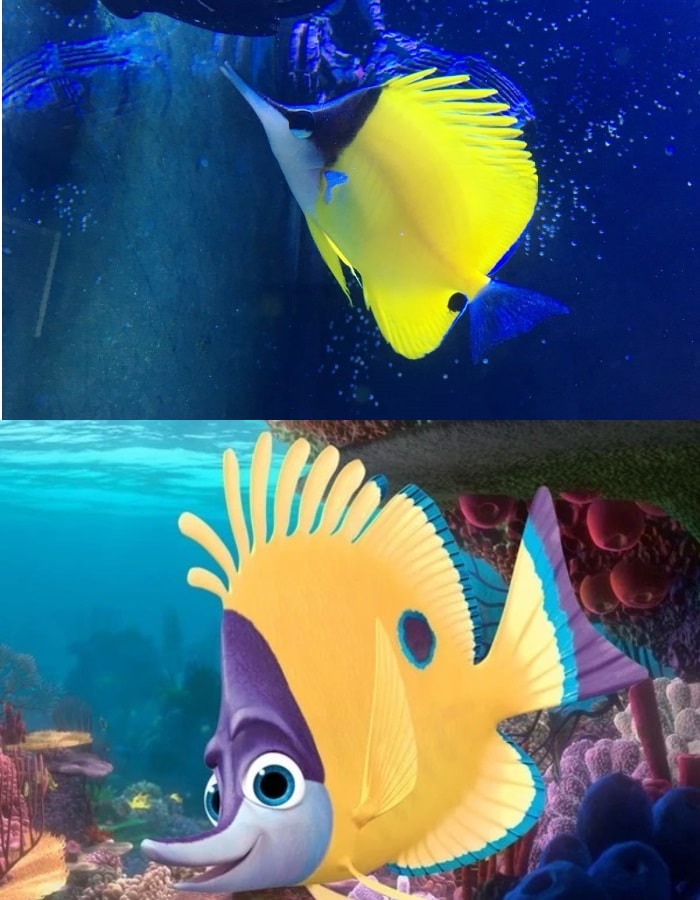 Nemo’s classmate Tad is a yellow and purple Longnose Butterflyfish.

In the movie, you can also see Tad’s father – Bill, among other parents.

The non-fish parents you see in these scenes are the seahorse Bob, and the pink flapjack octopus Ted – the father of Pearl.

Tad and his dad Bill aren’t the main characters in Finding Nemo and just appear briefly.

Nevertheless, they sure are attractive fish that can be kept in home saltwater aquariums.

So if you want to keep one of these beautiful fish species, you can research the Longnose Butterflyfish and add them to your new tank. 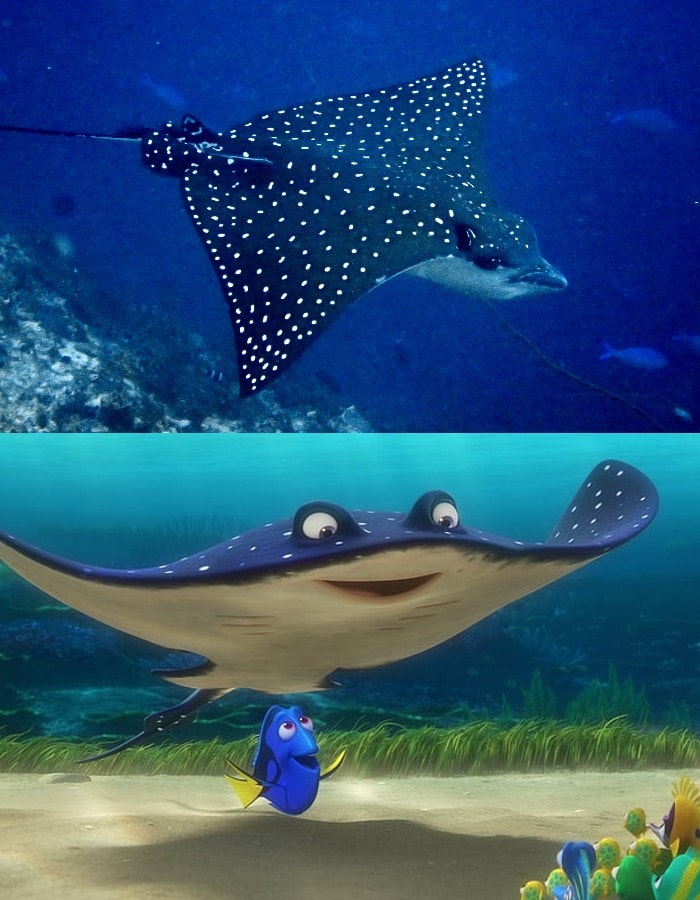 The likable Mr. Ray from Finding Nemo has many wondering what kind of fish he actually is.

These types of ray fish are characterized by a blue body and white spots.

Their span can reach up to 11 feet or over 3 meters, which makes them the second largest species of Eagle Ray, with the Manta Ray holding the first place. 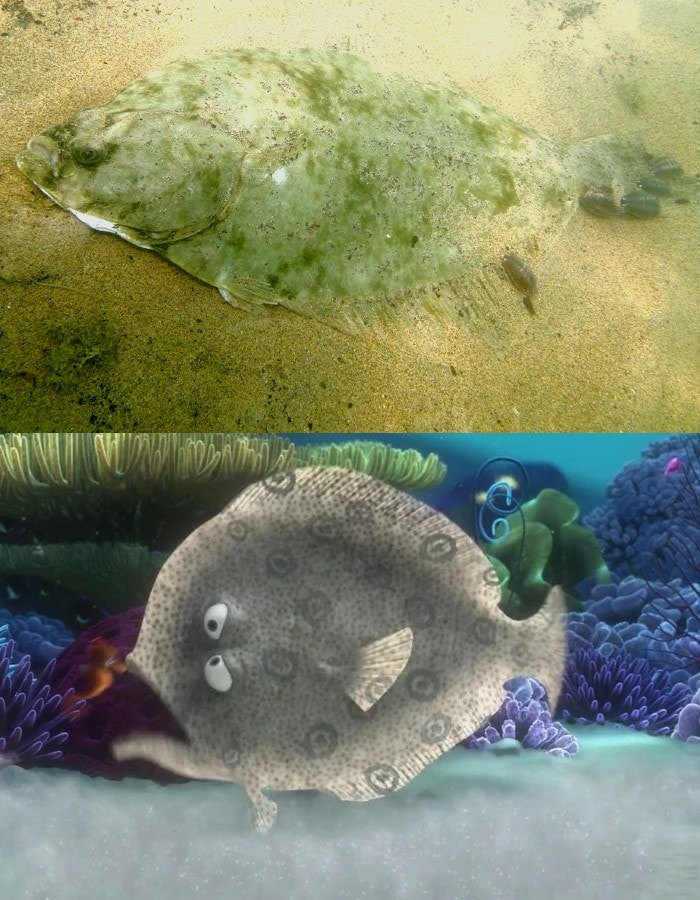 Many are curious to find out what type of fish is the flat Mr. Johannsen from Finding Nemo.

He is a Flounder from the Platichthys genus.

These peculiar-looking flatfish live on sandy bottoms in the ocean.

Their coloring merges them with their environment and makes them difficult to detect. 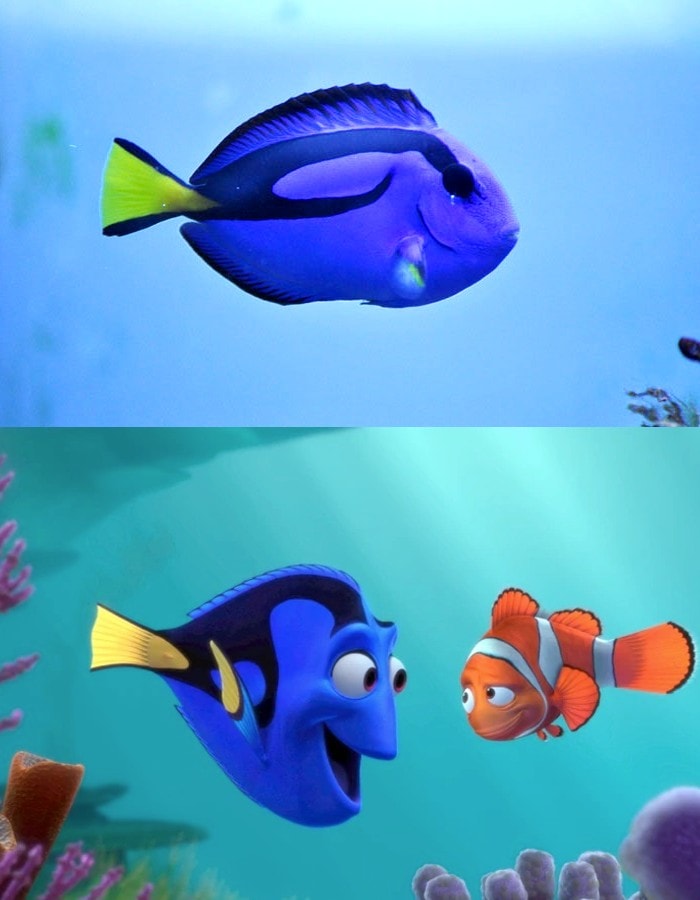 Dory is a Palette Surgeonfish, which is also known by their more popular names – Blue Hippo Tangs or Regal Tangs.

The distinctive visual traits of this type of fish are a blue body, yellowtail, and a black “palette” pattern.

Many aquarists keep a Blue Hippo Tang in their saltwater reef tanks but it’s not the easiest of tasks.

These fish are particularly sensitive, need a large aquarium, and are prone to diseases. It’s not unheard of to lose an expensive Blue Hippo Tang to the saltwater parasites that cause Ich.

So if you’re determined to start a Finding Nemo aquarium, you can get Dory to join in.

However, you’ll need some prior experience in keeping saltwater fish and I do not recommend trying it out as a beginner. 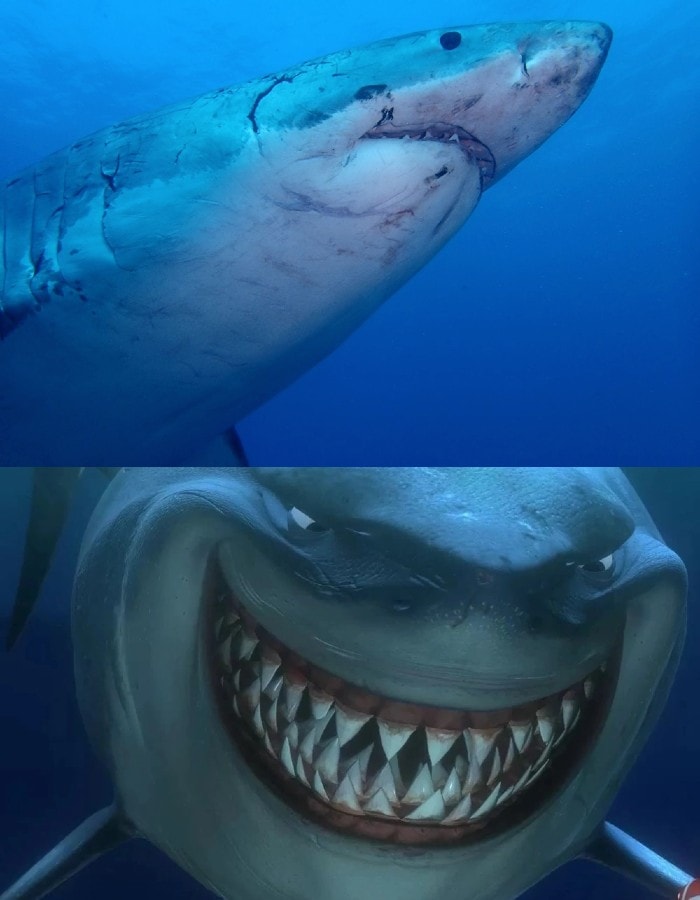 Bruce from Finding Nemo is a predator with big scary teeth, who made a pledge not to eat fish.

As a species in real life, he’s a Great White Shark.

Unfortunately, in reality, these carnivores don’t betray their nature and would happily prey on big and small marine inhabitants. 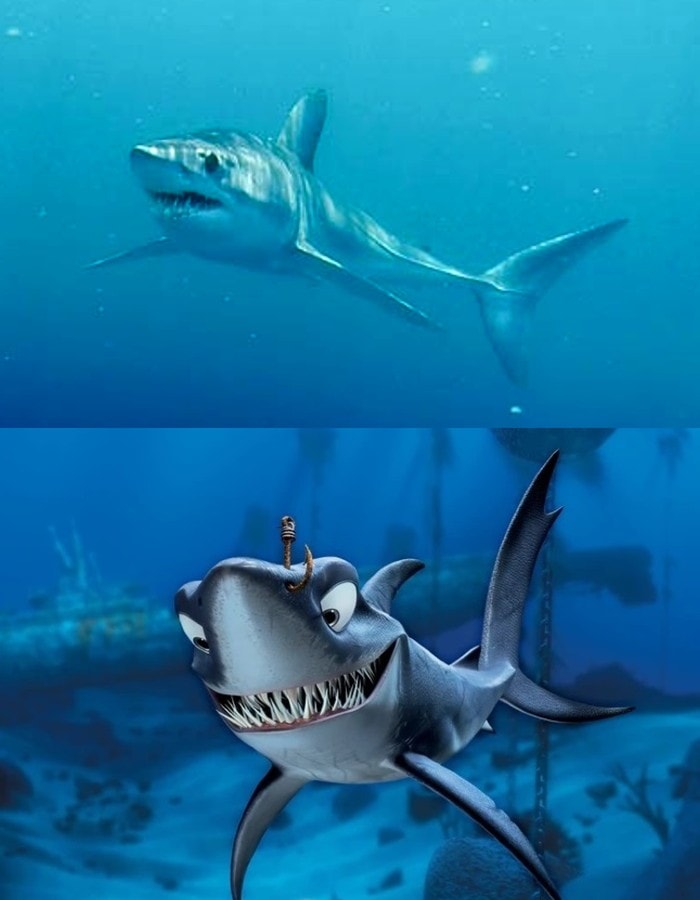 Bruce’s friend, Chum, is a type of shark known as Shortfin Mako Shark.

This large and ferocious shark also has many other names such as a Blue Pointer or a Bonito Shark. 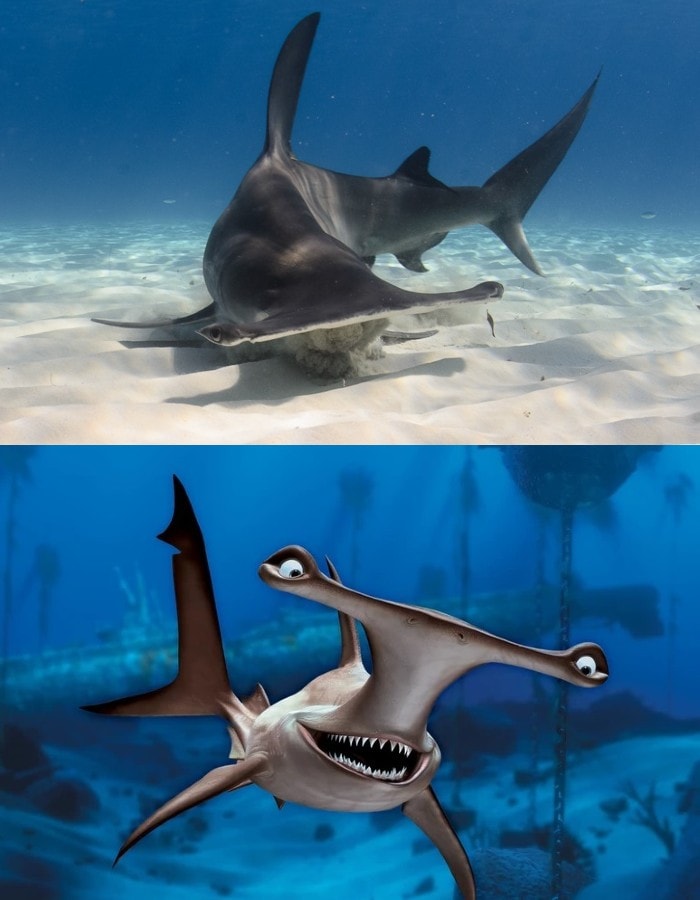 Anchor is a Great Hammerhead Shark, who, along with Bruce and Chum, is part of the “Fish are Friends, Not Food” support group.

During their meeting, the frightening carnivores had to bring a fish friend as evidence of their progress.

Anchor introduced Blenny to the group – a stressed-out green fish with dark spots and big lips.

Blenny is a minor character in Finding Nemo and he’s a type of fish from the suborder Blennioidei, commonly known as blennies. Unlike sharks, blennies are a popular choice for home reef aquariums. 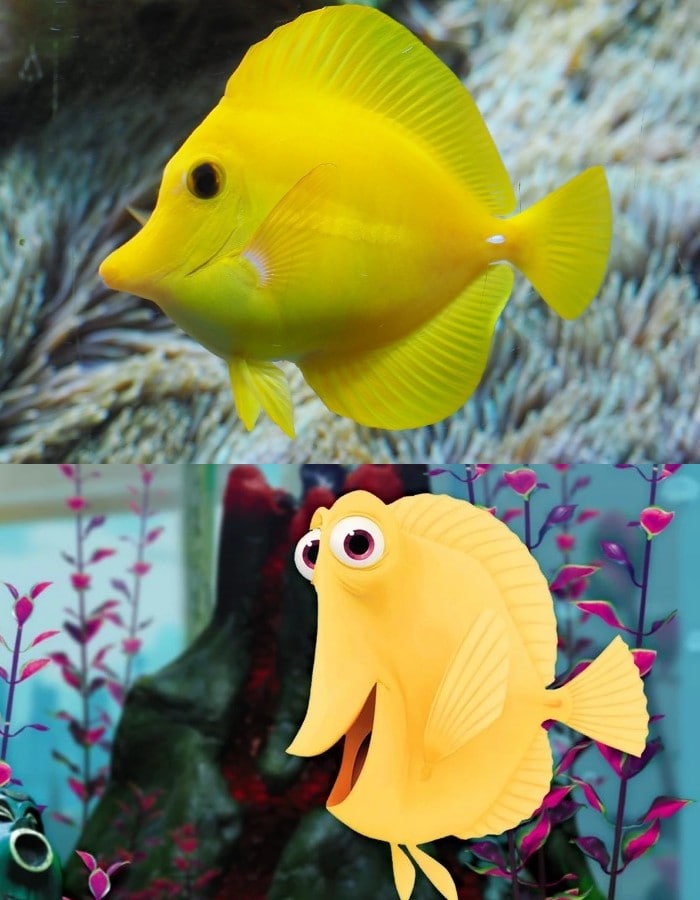 The yellow fish that likes bubbles from the aquarium in the dentist’s office in Finding Nemo is a Yellow Tang.

The representatives of this fish species are quite popular in the saltwater aquarium hobby.

Nevertheless, if you’re planning on getting one of these beauties, you should keep in mind that they can get quite aggressive towards their tank mates.

Yellow Tangs may also damage some types of corals if you are to keep them in a reef aquarium.

I recommend doing proper research before getting one to look after.

Deb and Flo are actually the same movie character.

Deb thinks her reflection in the aquarium glass is her sister Flo.

Anyway, they both are Striped Damselfish, also known as Humbug Damselfish.

In reality, these beautiful saltwater species usually appear black with three white bands, unlike Deb and her sister, who have blue bodies. 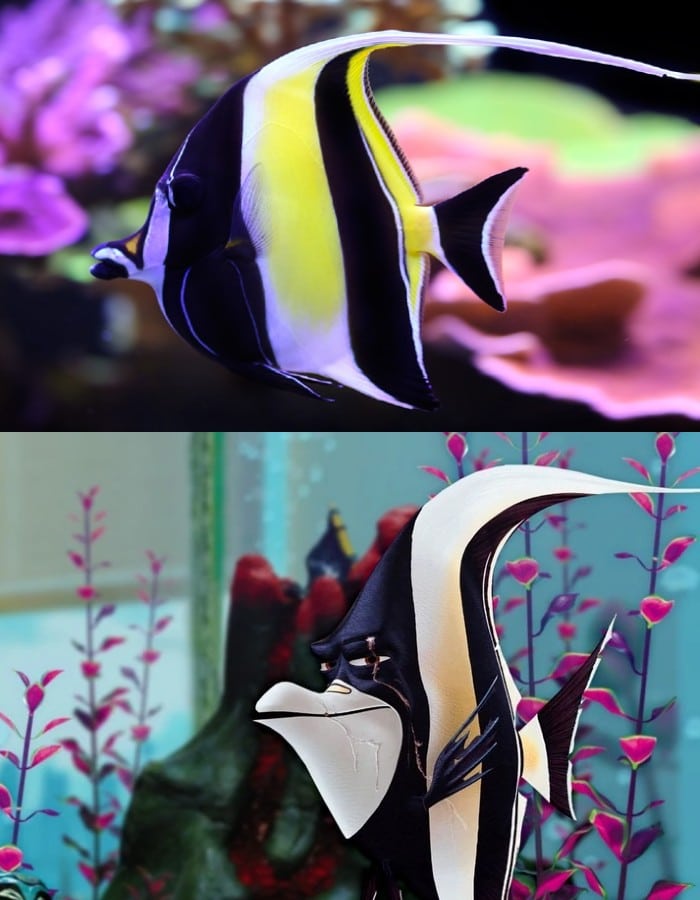 Gill, the fish with the scar on its face, that’s also found in the dentist’s office scene, is a Moorish Idol.

This fish species has a black and white body with yellow stains here and there. In real life, the Moorish Idol doesn’t survive easily in captivity, which is why it isn’t popular in the saltwater aquarium hobby. 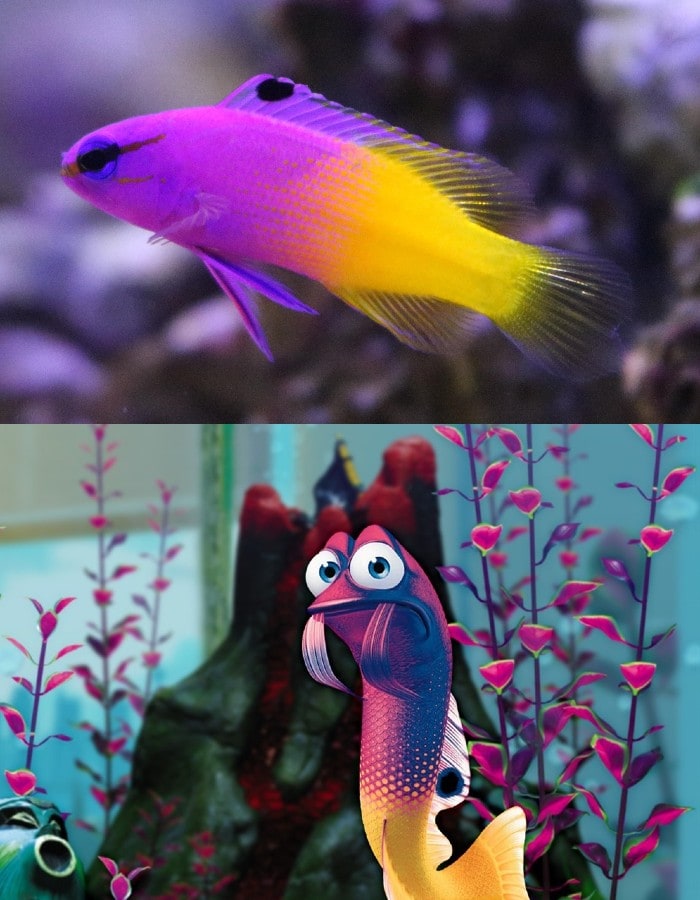 Gurgle is the beautiful half-yellow and half-purple fish in the dentist’s aquarium that wants to keep everything clean and sanitized.

In the real world, he is a Royal Gramma Basslet.

This type of fish is common for the saltwater aquarium hobby, as Royal Grammas are small, generally peaceful, and don’t require large fish tanks. If you want to learn more about these fish, you can check out my post on the best saltwater aquarium species for beginners.

Author’s Note: Jacques from the same dentist aquarium is a Pacific Cleaner Shrimp or as it’s known in the scientific community – Lysmata amboinensis. Jacques is the character that cleans Nemo after the cute clownfish says he’s coming from the ocean. 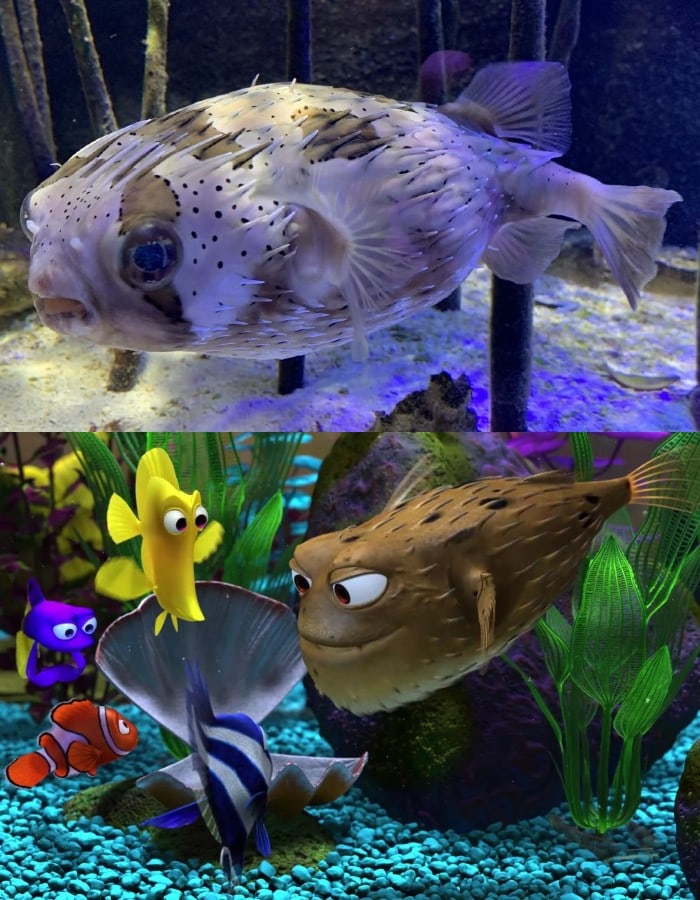 The species name of Bloat, the fish that bloats up when stressed, is Porcupine Pufferfish.

These types of pufferfish require a big aquarium, but it’s rather simple to take care of them.

If you want to set up a “Finding Nemo”-inspired fish tank, you should consider getting a Porcupine Puffer.

They have a ton of personality and are quite fun to observe! 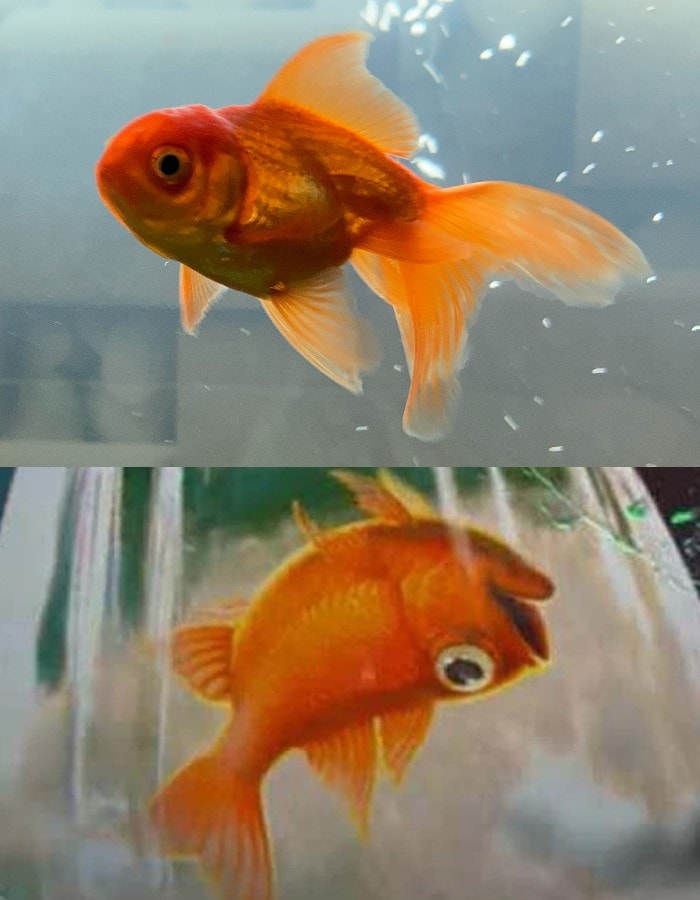 Chuckles is the goldfish in the bag that appeared in the picture of the girl Darla – the dentist’s daughter in the film.

16. The fish with the light bulb – Female Anglerfish; Lophiiformes 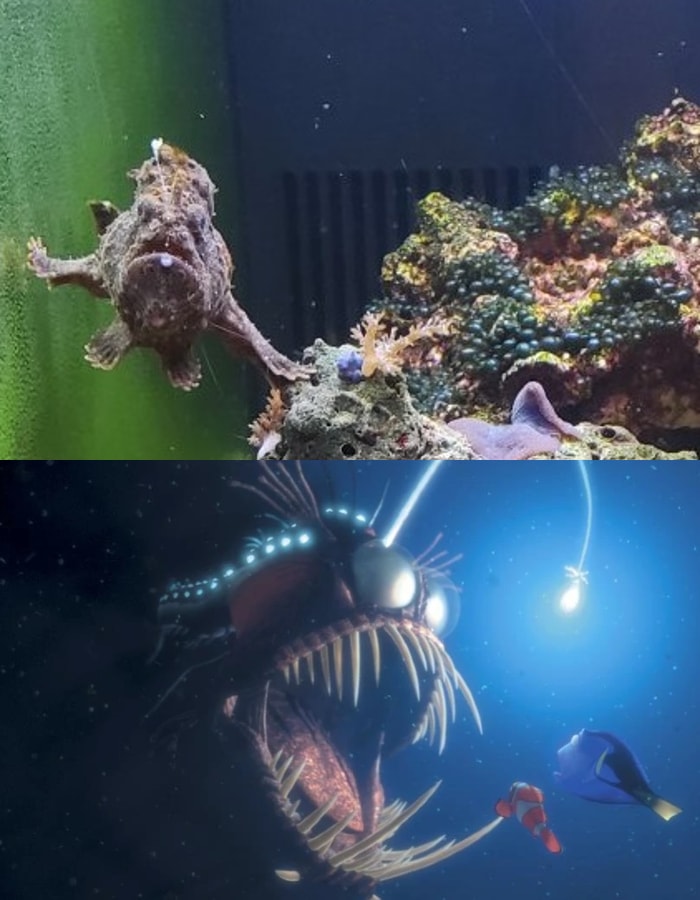 The eerie fish with a light bulb hanging from its forehead, that also almost killed Marlin and Dory, is a female Anglerfish.

I specify that it’s a female, as male specimens don’t have a luminous lure that baits prey close enough to be eaten. 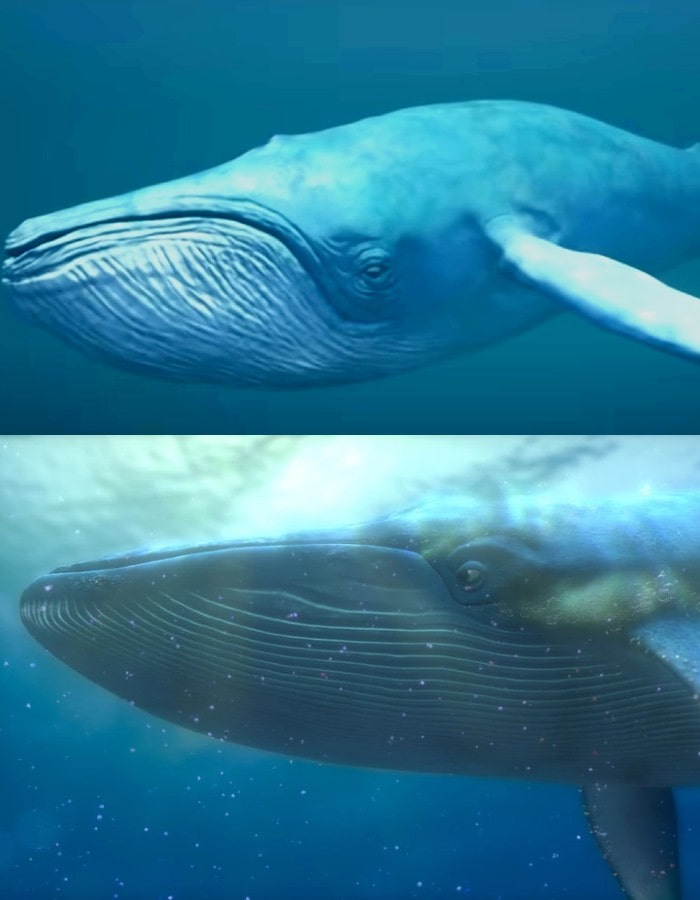 The Big Blue Whale from Finding Nemo isn’t actually a fish but a mammal.

The mysterious creator appeared out of nowhere and almost swallowed Marlin and Dory when they were on their way to save Nemo.

A fun fact about this marine mammal is that it has no teeth.

Instead, it has hundreds of baleen plates that look like the bristles of a comb.

The plates serve as a filter of sorts.

The whale first opens its mouth to take in water and then pushes the water out through its bristles.

The baleen plates filter the aquatic creatures, leaving them inside the mouth of the Big Blue Whale.

There, they remain as their source of food.

I hope I helped you with understanding what the real fish species from Finding Nemo are.

Other minor characters that I didn’t include in the list are:

Anyway, if there are any other questions that I can answer regarding the topic, please leave me a comment below. 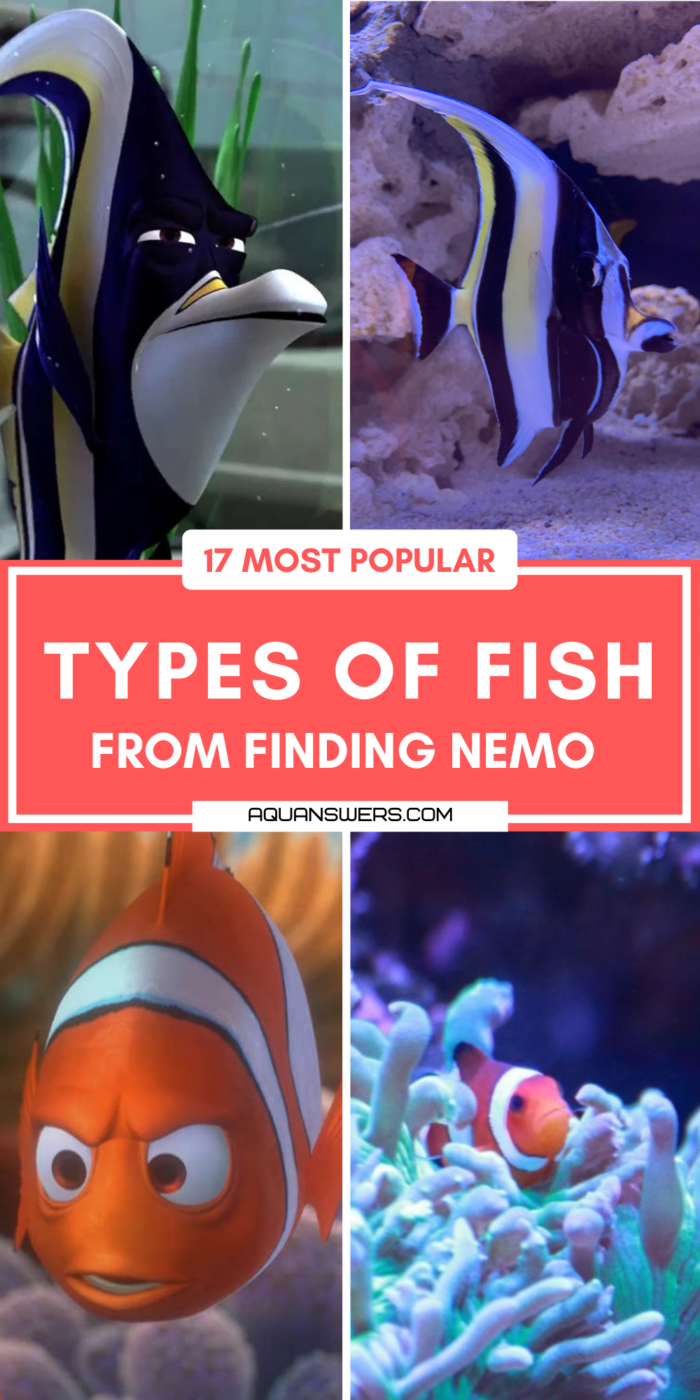