There are a few things to consider when bringing a new pet fish to your home tank, or when transporting the aquatic animal to a new location.

I had no idea how long a fish can survive in a bag when I got my first goldfish from the local pet store.

I was concerned that my new buddy may suffocate at some point during the 90-minute drive back to my place.

The seller had already told me not to worry because he had filled the plastic bag with pure oxygen.

I was assured that the fish could live in it for quite a while.

With time I realized that my 90-minute drive wasn’t that big of a deal, as many breeders ship fish overnight in these polybags successfully.

But how long can a fish live in a Ziploc bag, or a small container?

Can fish stay in breather bags for longer?

Would a hardy betta survive a 48-hour shipment if it stays in a bag with enough oxygen?

Well, I’ll share all the answers I’ve learned through experience, so let’s dive in!

How long can fish survive in a bag?

There are several variables that we need to take into consideration when discussing the time a fish can survive in a small bag.

Some of these variables are the amount of present oxygen, the fish species, and their susceptibility to stress caused by temperature fluctuations and changes in other water parameters.

For example, cardinal tetras are much more sensitive to shifts in water parameters compared to bettas and goldfish.

Furthermore, the amount of time fish can live in their shipping bags has to do with transportation conditions and whether they’re packed accordingly.

With that being said, here’s how long a fish can live in a shipping bag:

Ideally, you should try to avoid letting a fish stay in a bag for more than 4 to 6 hours. With that being said, if optimal packing conditions are met, a fish can safely live in its bag for 24 to over 48 hours without suffering any damage. Most freshwater fish will survive overnight and 2-day shipments in a breathing bag or a polythene one that is packed with 1/3 water and 2/3 pure oxygen.

Most reputable breeders and pet store sellers pack fish according to a set of strict requirements. Following these requirements keeps your new pet alive for quite a while before the time comes to put it in its new tank.

I’ve actually received fish shipments that were in transit for 3 days and yet all of my new aquatic stock arrived alive and swimming energetically.

Other times my new fish were already showing signs of stress and dying after just a day in transit.

But let’s explore in detail the factors that determine the time a fish can survive in a bag.

What factors determine the time fish can stay alive in a bag?

Pet fish have been sold in bags for decades, so there’s enough knowledge on what keeps them alive in their temporary homes for longer.

Here are which factors may affect the time a fish can live in a bag:

Fish will eventually suffocate in a bag that doesn’t have enough oxygen in it.

Aquatic pets do need to breathe to survive.

Fish have gills that absorb the oxygen that is present in water. Some species, like Betta fish and other Gourami, can even breathe atmospheric air from above the waterline through their “labyrinth lungs”.

To provide enough oxygen for fish and other aquatic inhabitants, the seller needs to add air or pure oxygen to the bag.

As a general rule of thumb, a fish bag should have 1/3 aquarium water and 2/3 air or oxygen.

Keep in mind that atmospheric air is made up of only 21% oxygen and the rest is nitrogen. This is why pet stores have pure oxygen tanks that they use for transport packaging.

By pumping some pure oxygen into the fish bags, they make sure that the fish will survive for longer.

There are two main types of bags that are used by pet stores and breeders for fish transport: 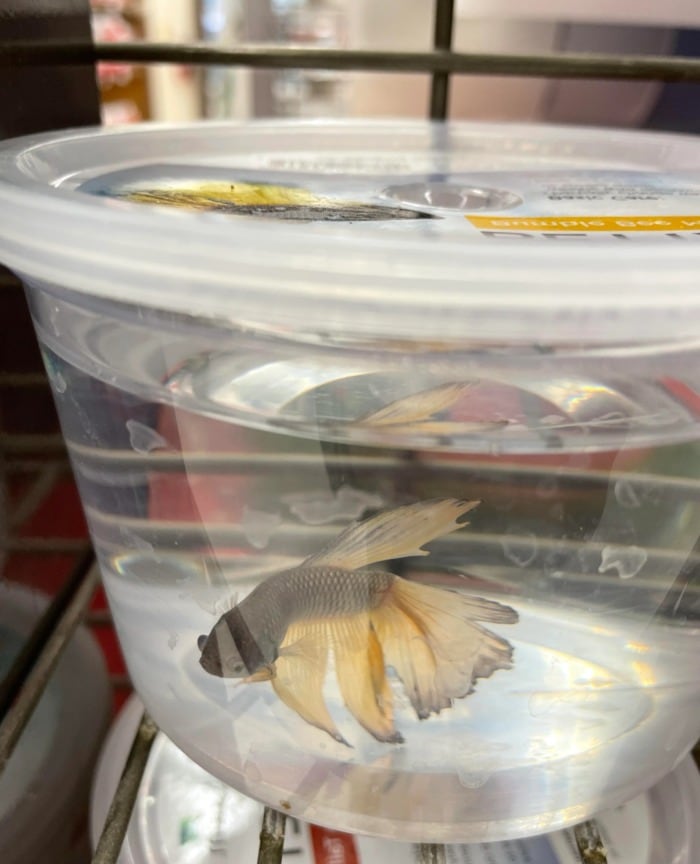 Author’s note: I don’t recommend using Ziploc bags for transporting live fish. These bags’ shape isn’t ideal, as they’re somewhat narrow at the bottom and won’t be comfortable for your pet. Furthermore, they break easily, and on top of that – they may be lined with toxic chemicals that may leach into the water and eventually kill your fish. In my experience, it’s only justified to use Ziploc bags in the case of an emergency. However, generally, a fish shouldn’t be left in a Ziploc bag for more than 1 hour.

Anyway, at some pet stores, they sell their fish in plastic containers.

I’m not a fan of those either.

These containers are usually more expensive, don’t allow for adding enough oxygen, and it’s overall riskier to transport fish in them.

I’d estimate that a fish can stay in a sealed container for no more than 2 hours.

Fish can survive in a bag for longer if you make sure that there aren’t drastic water temperature fluctuations.

To control the water temperature and maintain it within a healthy range for aquatic inhabitants during transportation, breeders would often place the fish bag in insulated containers.

Such containers are usually styrofoam shipping boxes, accompanied by either heat or ice packs. 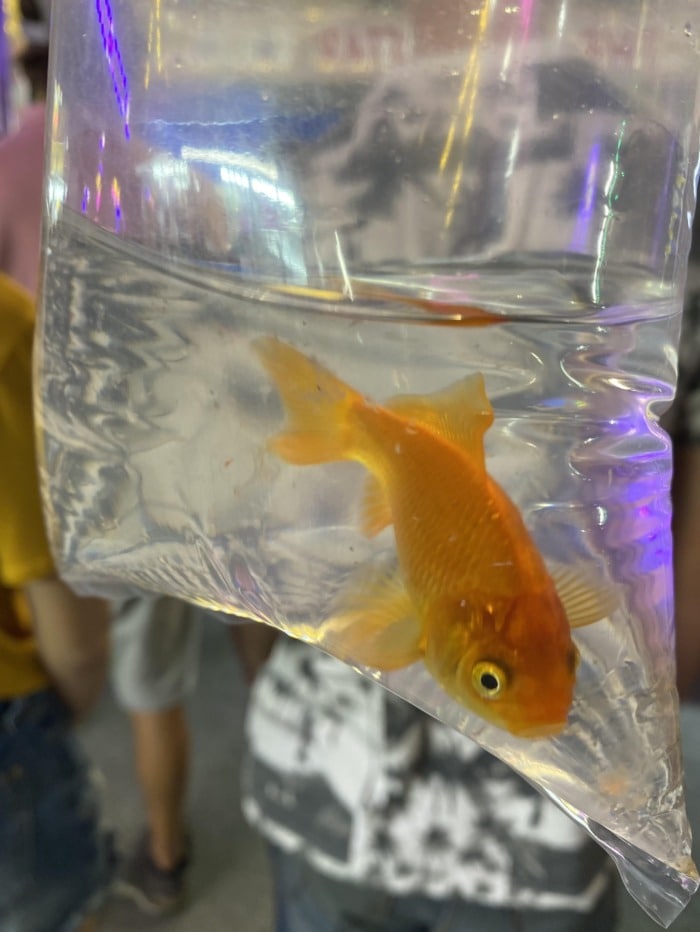 Heat packs are actually small heating pads that are used when a tropical fish is transported during cold weather.

That’s because tropical fish do poorly when their water is not warm.

Conversely, ice packs are used to prevent a drastic water temperature rise when the weather is too hot. Some fish prefer colder aquarium water and can actually turn ill from tropical temperatures.

Using a regular box and some sort of insulation material that will maintain the temperature is also an option.

The good thing is that if enough insulation material is present, it will also keep the transport bag from moving, which will reduce stress and anxiety in the transported fish.

The more time a fish stays in a bag, the more waste it’s going to release into the water. This waste will turn into toxic ammonia.

Ammonia spikes in the bag can suddenly kill your new pet. Although there are ways to control ammonia levels in an aquarium, there’s almost nothing you can do about them in a bag, in the middle of your trip.

To reduce the amount of generated fish waste during transportation, you should avoid feeding your pet for at least 24 hours before it’s time to transfer it into the bag. Don’t worry – most fish can go without food for up to a whole week, so a day or two without eating won’t harm them.

Author’s Note: When fish breathe they exhale CO2 which lowers the pH of water. The good thing is that lower pH makes ammonia less toxic, which is why some breeders and pet store sellers prefer using polybags instead of breathing bags for shipping. With that being said, I haven’t had bad experiences with breathing bags, so I wouldn’t say that the gas exchange they provide impacts ammonia toxicity as heavily as some people suggest.

5. Fish species and their sensitivity.

Environmental and water parameter changes have a more severe negative impact on some fish species.

Cardinal tetras are very susceptible to stress, which is why they often die during transportation.

Bettas and goldfish, on the other hand, are quite hardy, which is why they can live in a bag for much longer and often survive 2-day shipments.

Furthermore, saltwater fish seem to be much more prone to dying during shipping compared to freshwater fish.

Judging by my own experience when ordering fish online, the chances of saltwater fish arriving dead at my place is at least 50% higher in comparison with when I order freshwater species. Furthermore, small saltwater species are especially sensitive to transportation.

Therefore, I’d avoid leaving saltwater fish in a bag for longer than 24 hours.

A fish will survive for longer if the bag it’s placed in is bigger.

On the one hand, a bigger bag means that there would be more water and space for the fish, which will reduce its stress.

Furthermore, if there’s a larger amount of water in the bag, it would take more time for the temperature to rise or drop.

On the other hand, if you’re using a bigger polyethylene bag, filled with 1/3 water and 2/3 air, there will be more space for oxygen, which will keep your fish from suffocating for longer.

When you move fish to a new environment, depending on their personalities, they will either get excited or stressed.

This will cause them to move more and breathe more, which means that they will use more of the available oxygen.

To keep them alive in their bag for longer, you should reduce the factors that contribute to the rise in stress, anxiety, and excitement.

A wise move here would be to limit the bag’s exposure to bright light.

If you want to leave your new fish in the plastic bag from the store overnight, make sure to keep the lights in the room off.

This is done to avoid a sharp reaction by your new fish to the change in its environment.

Furthermore, if you are to transport fish for a prolonged time, you should place the bag in an opaque box.

Many aquarists would place their fish bags in picnic coolers while traveling.

This is a good practice, as it also limits water temperature fluctuations.

You can also place the bag over a towel to limit its movement, which will further reduce the stress levels of the traveling fish.

The more fish there are in a bag, the more generated fish waste and the less available oxygen.

Therefore it makes sense that the larger the number of fish per bag, the less time they would survive in it.

To keep your pets alive during a move for longer, try carrying only one fish per bag. If they are small species, it’s possible to add a few of them.

Nevertheless, you should always take into consideration the bag’s and the fish’s size to make an adequate decision.

How to keep a fish in a bag alive for longer?

After going over the relevant factors, I want to put up a quick summary of how to properly pack fish, so that they last longer during a move.

To keep a fish in a bag alive for longer during travel follow these steps:

With all being said, I hope that you found this article useful and that I managed to answer all of your questions.

Nevertheless, if you want to ask something, feel free to do so in the comment section below.