There’s nothing more aesthetically pleasing than having an aquarium full of colorful fish.

To achieve this, most pet owners opt for a beautiful, and yet sometimes expensive Betta fish.

Due to their uniqueness, Bettas are also one of the preferred choices for breeders.

Naturally, this leads to the creation of hybrid species which are quite rare, and in some extreme cases end up costing a fortune.

Curious to see how pricey these breeds actually are?

You’re at the right place!

Before we move on to the list, let’s first look at what affects the price of a Betta fish.

Bettas have been bred for ornamental purposes since the early 19th century.

Throughout the years, breeders have managed to create a plethora of unique species by focusing their attention on various traits.

Some selectively bred fish with unique tail shapes, while others were more engaged in creating one-of-a-kind color patterns. When the selected features stood out from those of other Bettas, the price of the selected breed went higher.

All of this led to an influx of Bettas with all manner of tail shapes and pigmentation patterns.

This, in turn, made the truly rare ones even more pricey.

Having said that, it’s time to move on to the 9 most expensive Betta fish: 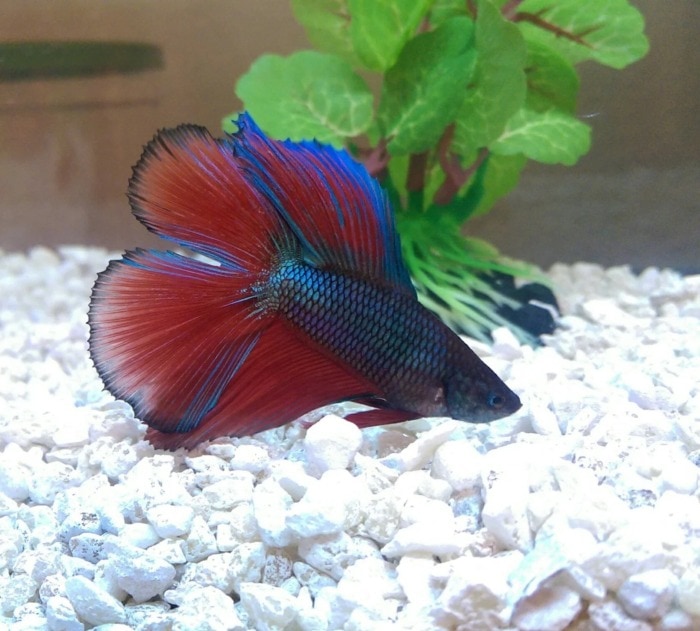 Don’t let the name of this Betta type fool you.

It actually has a single tail, with a split at the base of it.

This, however, doesn’t make it any less appealing.

Twin Tails or Double Tails as they’re most commonly referred to are quite rare to find.

This in conjunction with the diversity of color patterns they come in, can substantially increase their cost.

Regardless of this, being at the bottom of the list means they’re still relatively inexpensive compared to other breeds.

The most expensive Twin Tail specimens can fetch a price of a few hundred dollars.

Author’s note: Bear in mind that Twin Tails aren’t as hardy as other Bettas. Being the result of a mutation, they are predisposed to various health predicaments such as fin rot and swim bladder disease. 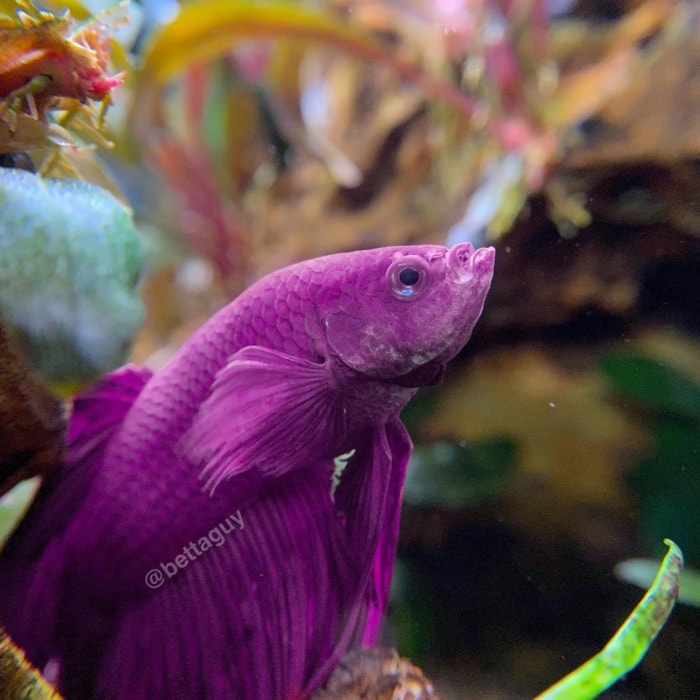 Just like every other ornamental fish, they don’t exist in nature and were bred with a specific purpose in mind. The difference lies in the fact that creating a fish with a single color shade is quite difficult.

Many breeders try to achieve this effect by crossbreeding blue and red bettas.

Unfortunately, the results seldom meet the expectations of buyers.

For this particular reason, most “purple” Bettas sold on the market actually have red or blue undertones which can easily be spotted using a flashlight.

There are also subspecies of purple Betta fish such as the Purple Salamander and Purple Popsicle, but even those aren’t purely purple.

Author’s note: Breeding a purely purple Betta is an extremely demanding process. Most often than not, it results in a fish with a mixture of pink, red, and blue. This is why purple is widely considered to be the rarest color for a Betta fish.

With all of this in mind, it’s not a surprise that a purely purple Betta can go for a few hundred bucks or even more on the market. 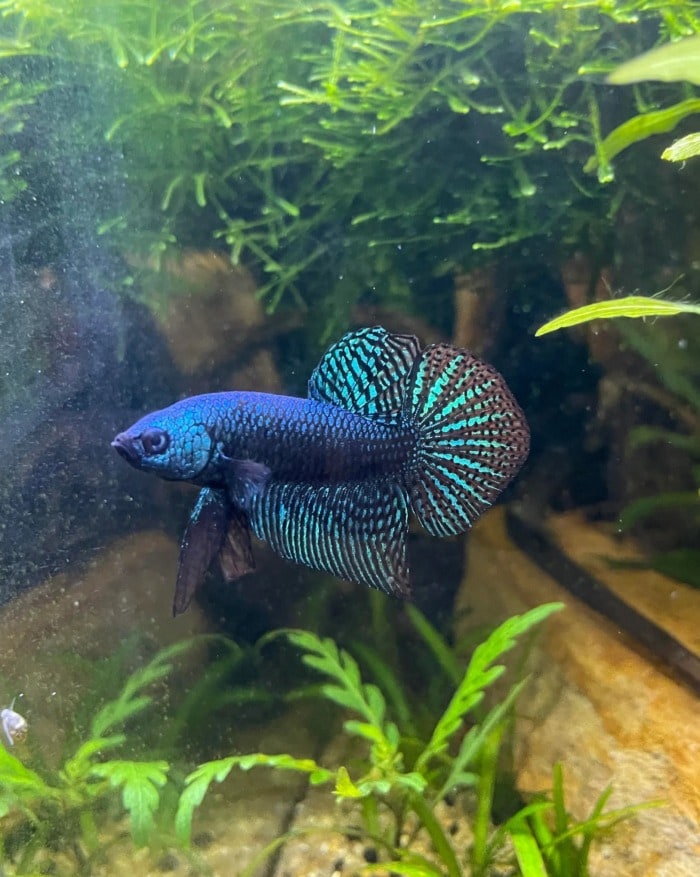 Unlike the previous entries in this list, wild Bettas are completely natural.

This puts them at a somewhat disadvantage when it comes to the look of their tail fins.

However, they more than compensate for it with heavily saturated pigmentation.

The single most important feature which differentiates wild bettas from their ornamental cousins is their authenticity.

These fish aren’t weighed down by the different mutations that plague other betta fish and as a result, are more resilient.

This along with the fact that there are more than 70 different species of wild Betta Fish, makes rare specimens truly valuable. 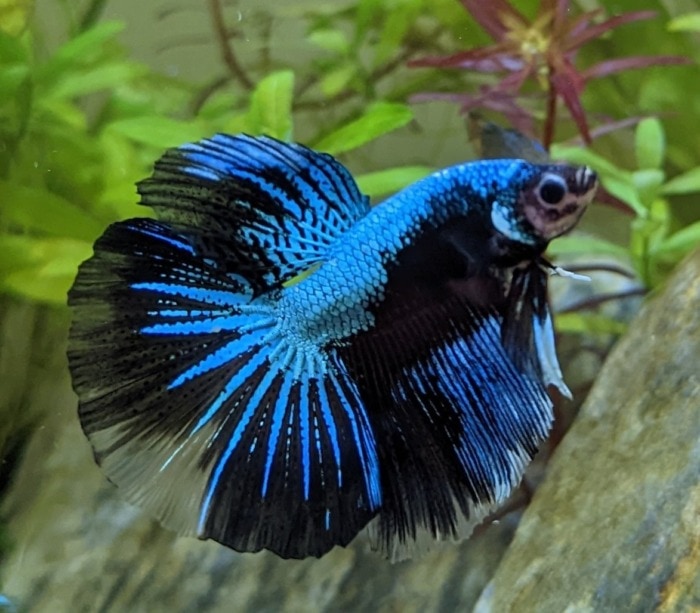 “Over half moons” (OHM) are one of my favorite betta breeds.

The way they swim exudes an air of elegance, which makes them easily stand out from other fish.

Pair this with their diverse color palette, and you can easily see why they’re so popular among aquarists.

The king of Blue Eyes is no exception to this rule.

It boasts a splendid multicolored tail, with hues ranging from walnut brown to cyan and light blue.

The contrast between its tail and body makes for a truly stunning specimen.

The King of Blue Eyes Avatar was sold at an online auction for $533. 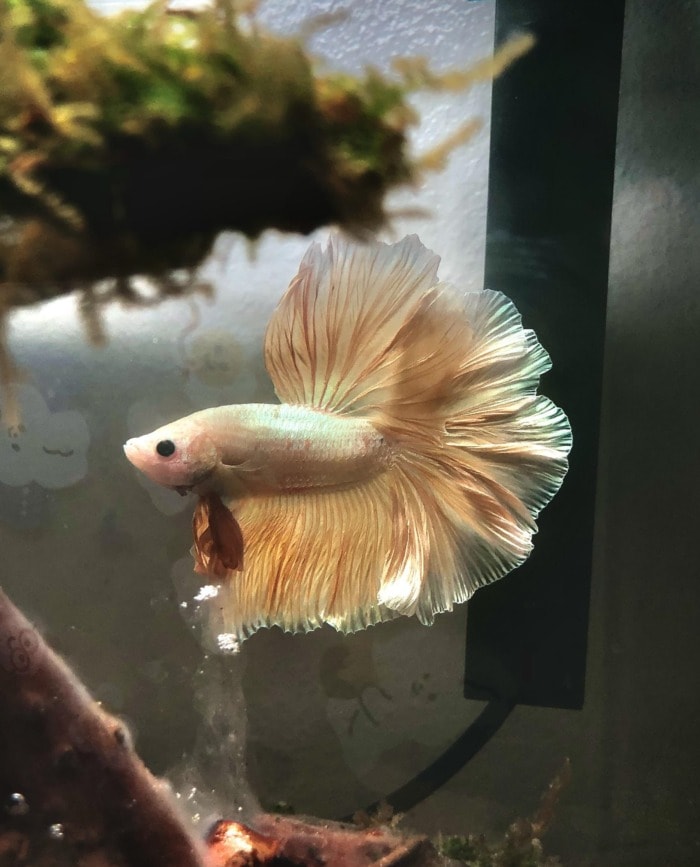 This half moon is well deserving of its name.

The brass color of its body accompanied by its cellophane tail, give it a truly regal look.

Upon first glance, you might start thinking it may even grant your wishes.

Unfortunately, the only way to find out if that’s true would be to part with at least $570 of your hard-earned cash. Personally, I wouldn’t spend such a sum, for it’s still a Halfmoon prone to the typical Betta health issues. 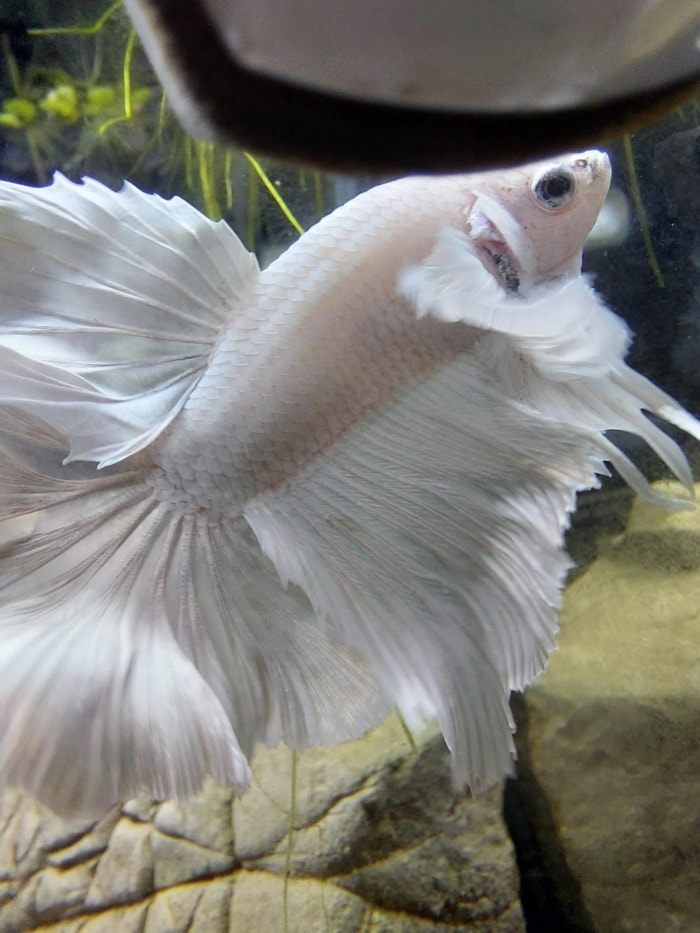 It shouldn’t come as a surprise that there’s another OHM on the list.

Unlike the King of Blue Eyes, however, the Rose White Platinum is of the Dragon betta variety.

You might wonder what makes this type of betta so valuable when there’s an abundance of dragon scales on the market.

While this might be the case, white is one of the rarest colors for a betta fish, which makes this specimen a true gem in the eyes of aficionados.

With a price tag of $680, the Rose White Platinum Dragon ranks as one of the most expensive betta fish ever sold. 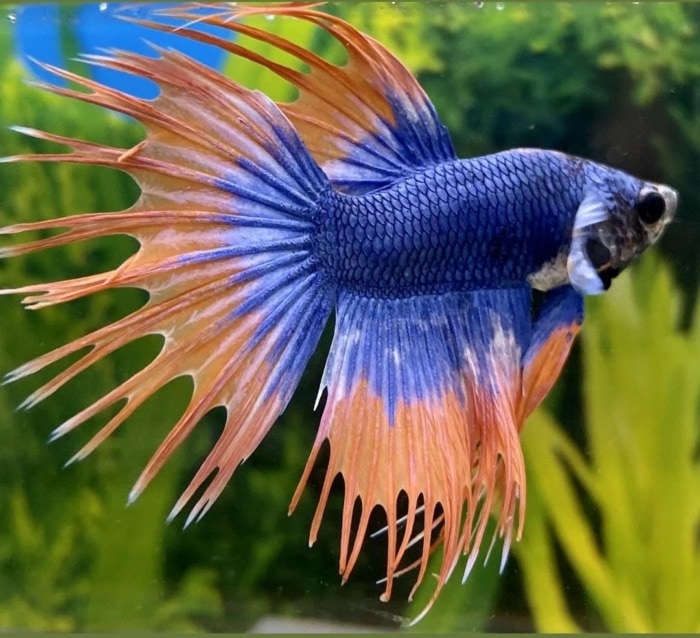 Crowntails have arguably the most distinct-looking tail of all bettas.

Mistaking them for other breeds is borderline impossible.

This, along with their relative rarity, can make them quite expensive.

It’s good to keep in mind that the beauty of a Crowntail comes at a cost.

These bettas are prone to diseases that attack their fins.

That’s why it’s not uncommon for them to bend their tails, break a ray or suffer from fin rot. 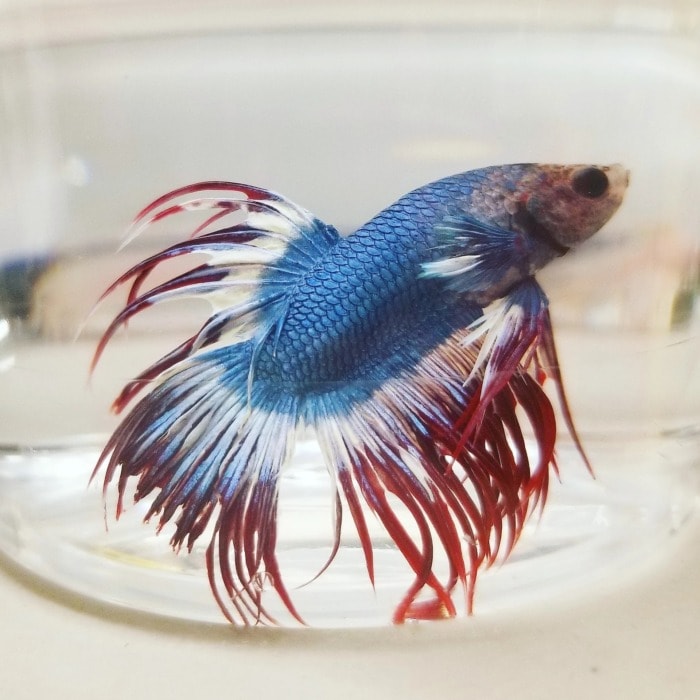 Named after its creator, the Kachen Worachai is a plakat betta in the colors of the Thai national flag.

The increased popularity of plakats in Thailand and other parts of Asia has made them one of the prime choices for breeders.

And even though there have been previous attempts at creating a betta in the colors of the Thai flag, none has ever come as close as the Kachen Worachai.

This colorful betta surpassed the initial expectations of its owner who expected it to sell for a few hundred dollars. The Kachen Worachai Betta’s sale price of $1530, makes it the single most expensive betta fish in the world. 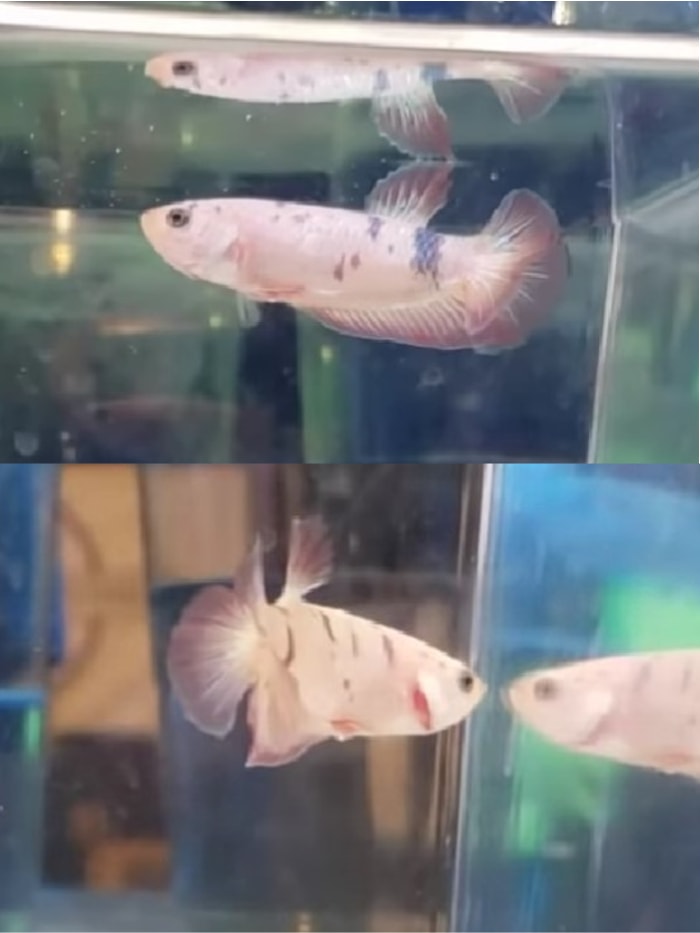 The last entry in this list is more of a speculation than anything else.

During my visit to the Aquashella convention, I stumbled upon a breeder who claimed to have created a pair of fantail plakat bettas.

Fantails are quite a rare sight on their own.

Buying or even finding one is nigh-on-impossible.

At this point, they’re like mythical creatures, with only word-of-mouth accounts of their existence.

Unsurprisingly, I felt somewhat suspicious when I heard about these fantails.

When I finally did manage to catch a glimpse of them, my suspicions turned out to be unwarranted.

Even though they aren’t for sale, according to their creator, each could fetch a price of $5000.

Again, all of this is in the realm of speculation, so you should take it with a grain of salt.

Feeling discouraged by these prices? Don’t be.

There are other less expensive betta fish that look equally as impressive for the most part.