Imagine this: you’ve finally decided to diversify your freshwater tank with something more exotic.

Your new fish of choice is a fire eel, but after some research, you become curious if it’s dangerous to humans.

Fire eels might look menacing, but they aren’t as threatening as most people perceive them to be. In my experience, they are quite timid and usually spend most of their time hiding.

Of course, that’s not always the case.

There are some risks involved in handling this animal.

Here’s when you could get hurt by a fire eel.

Are fire eels dangerous to humans?

Unlike some ill-tempered fish like the Betta, fire eels usually get along with humans peacefully.

They are initially shy and bury themselves in the tank’s substrate where they can feel safe.

However, with time they become more playful and start to recognize their owners.

How cool is that?

But despite their peaceful demeanor, fire eels may be somewhat dangerous to humans on some rare occasions:

When handled, fire eels tend to violently thrash around. This along with the sharp spines on their dorsal fins, could lead to some serious cuts. In case you get cut, you should treat the wound with an antiseptic or seek medical assistance.

You should keep in mind that although the spines themselves aren’t poisonous, the slime they secrete can be toxic. As the adage goes, prevention is better than a cure, so if you want to avoid unnecessary injuries, you should abstain from handling them directly.

Instead, use a pair of gloves or a net when moving them around.

With that being said, such events are extraordinarily rare and are most often due to negligence or inexperience.

Author’s note: From all my years in the hobby, I am still to experience a cut from a fire eel. In fact, my fire eels are so tame they even let me hand-feed them. Which leads me to another recurring question I often get asked.

Do fire eels bite when you feed them?

Being the timid creatures that they are, fire eels are slow to eat when first introduced in an aquarium.

However, their appetite gradually increases as they get more comfortable with their new setting.

Once they fully adapt to their environment and let loose of their inhibitions, fire eels become voracious eaters.

This unexpected change in behavior surprises some owners who then get nipped by their eels. Being used to the tentative eating patterns of their pets, they falsely perceive this as a permanent behavior trait.

To avoid such unexpected nips, closely monitor the behavior of your eels.

When they become accustomed to you, they will eagerly swim to the top of the tank when it’s time to feed them.

In case you are afraid of getting bitten by your fire eel, you can rest assured that there’s nothing to worry about.

Fire eels have small teeth which are somewhat akin to those of a catfish.

Even if one bites you, it wouldn’t result in anything serious.

Although I’ve heard reports of eel bites from fellow aquarists, mine haven’t bitten me yet.

In fact, they even let me play with them.

When I want to fool around, I just stick my finger in the water, so they come up to sniff it.

When they do, they then proceed to sit around waiting to be pet on the head.

Either way, if you do get bitten by a fire eel, you should thoroughly clean and disinfect the wound if there’s one.

Do these eels pose a threat to other tank mates? 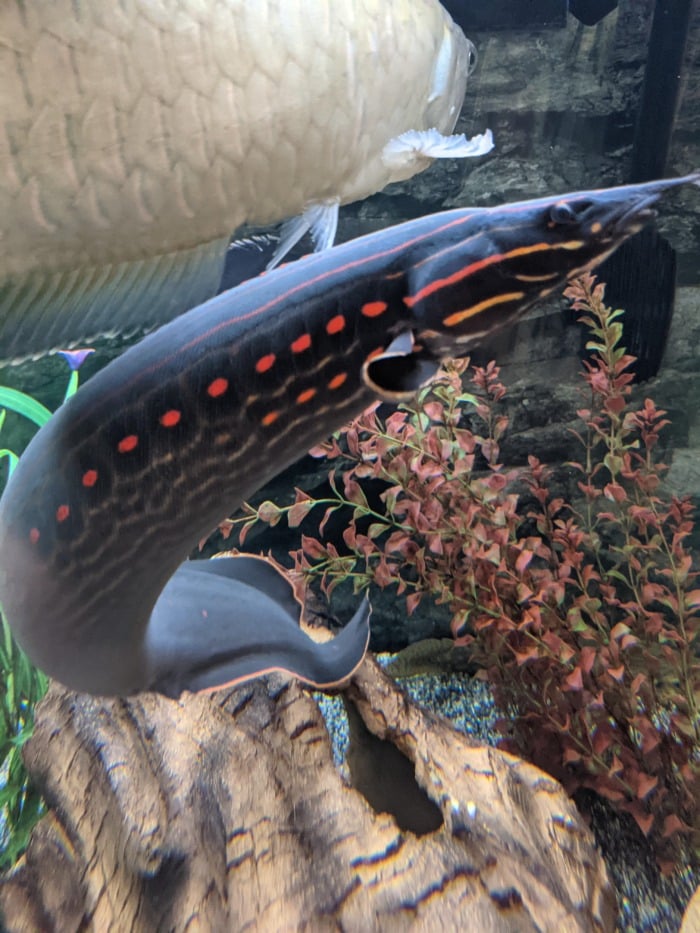 Another important factor to consider when choosing the right tank mates for a fire eel is size.

Fire eels are predators who can reach sizes up to 40″ when fully grown. If there are very small fish or invertebrates in the aquarium, fire eels will take advantage of the opportunity to gobble them up.

As long as your other tank mates are of a similar size or bigger than your fire eel, you won’t have any trouble.

Fire eels rarely disturb fish larger than them and, in most cases, get along with them well. This trait of theirs makes them the perfect addition to a community aquarium with other large and peaceful species.

Fire eels can be an amazing addition to any freshwater tank.

Hopefully, this article helped you understand that they aren’t as dangerous as most people think.

If there are still some questions that you think were left unanswered, feel free to use the question form below.