There’s an ongoing debate among fishkeepers about whether Tetra’s SafeStart and API’s Quick Start even work.

IF they do, which one is more efficient?

Starting a new tank can be stressful for both you and your new fish buddies.

The logic behind these products is solid, but that’s in theory.

Is there a safe dose or an overdose?

Should you do a fishless cycle?

What’s the reality? The good news is I have tested them both…twice.

I’d be more than happy to show you my results and point you in the right direction.

Which one to choose if any – API Quick Start versus Tetra SafeStart?

Both products claim to have live nitrifying bacteria that will speed up or reinforce your nitrogen cycle.

Here’s the truth about the Tetra SafeStart vs API Quick Start comparison:

Both Tetra Safe Start and API Quick Start will work, given that they are applied in a correct manner. The cycling of a new tank will speed up significantly but it won’t happen overnight.

You can realistically expect a fully cycled tank at the end of the second week (10 to 14 days) after application. Dosage plays a major role in success.

Unfortunately, following the instructions on the back is not something that will help, as they are pretty vague.

It is rather inconvenient that the instructions on both are not helpful.

After experimenting hard I’ve managed to highlight what strengthens your chance for success, eventually finding a process that, in my opinion, is foolproof.

I ran two tests on both before actually using them in a real fish tank project.

The only disappointing part is that they will not cycle your fish tank the same day.

Also by “add fish instantly” they don’t mean all of your fish.

How to use them and make them work?

After running a couple of tests I am confident to share my success formula with you.

Going through hundreds of forum threads and speaking with fishkeepers I know, I did find confirmations of my findings.

This means that my logic was correct.

Firstly you’d need to get the right bottle of bacteria. 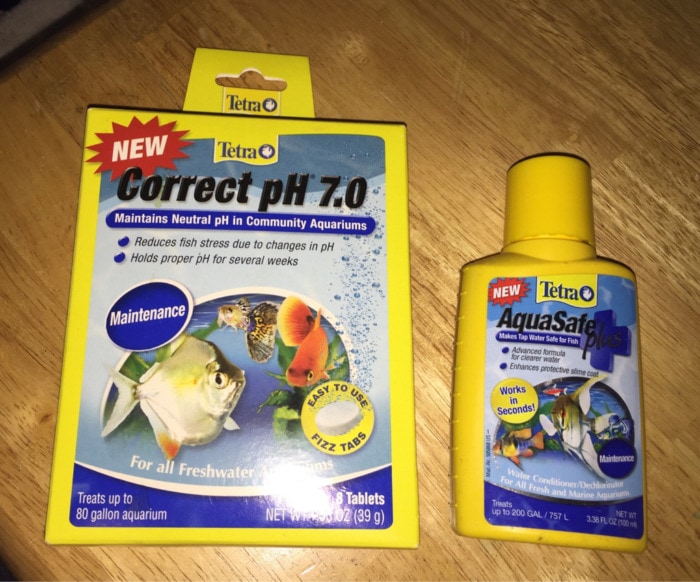 Both brands are claiming no refrigeration is needed.

Going beneath or above that range may spoil it, by killing the microorganisms and rendering the product useless.

Trusting your local fish store is okay, but I do prefer getting mine over at Amazon (link that will open in a new tab).

Anyway, if you do insist on getting the bottles from your local market make sure that they were safely stored and aim to get the most recently shipped ones (with the farthest expiration date).

Some instructions before you start are:

With that out of the way, you can start cycling your aquarium.

Follow these exact steps to properly use Tetra SafeStart or API Quick Start:

After the second week you can gradually add fish, but of course, don’t add 10 at a time. This would overwhelm the bacteria.

When doing the first water change the ammonia may go up, as there may be some ammonia in tap water, but I wouldn’t worry about it that much.

The levels should be overall low and should quickly get back to normal within the next 12 hours or so.

Also, don’t freak out if you don’t see your nitrites spike when water testing.

If you’re using Tetra’s SafeStart the process will skip the nitrites building up and will directly build into nitrates. 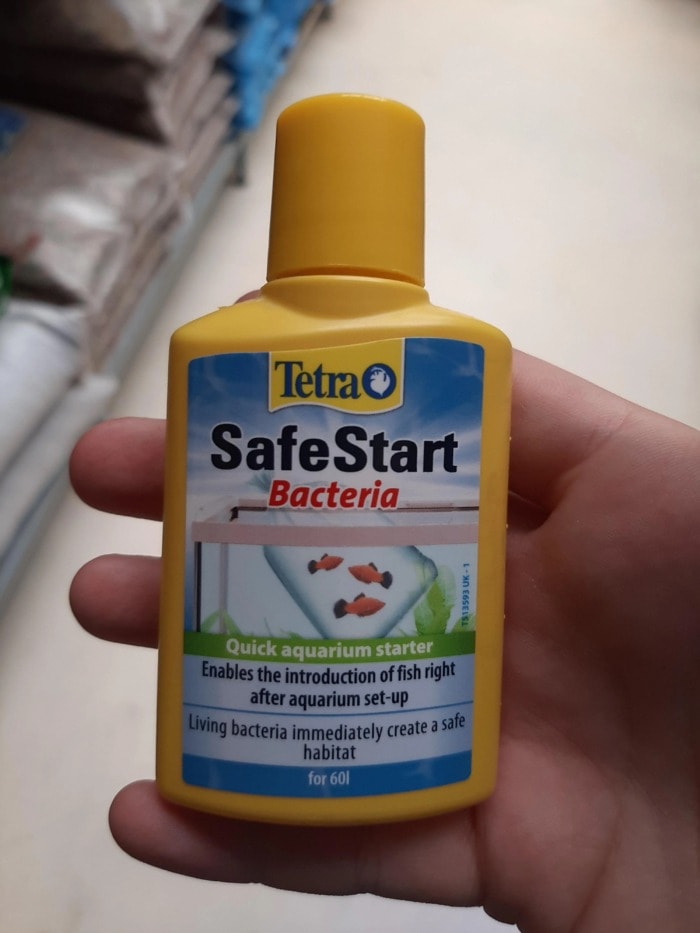 Don’t worry if your aquarium becomes cloudy at first.

The water will get clear within two to three days or a week at most.

Seeing cloudy water in a new aquarium at the beginning of its Nitrogen cycling is completely normal and it means that different bacteria are establishing their hierarchy.

Visit the link if you’d like to understand the process in depth. Understanding aquarium microfauna is, in my opinion, a core component of long-term success in fish keeping.

And that’s not an overstatement.

Which of the two should you choose? What’s the difference?

This is not one of those posts where I discuss the pros and cons of both products and leave the choice to you.

I have a statement:

Both can be (successfully) used for a start but If you’re starting a brand new empty fish tank and want to establish an environment safe from Ammonia, I’d recommend using Tetra SafeStart.

If you’re starting a brand new planted tank, doing huge water changes, or adding a lot of fish at once to an already cycled planted tank I’d go for API Quick Start. 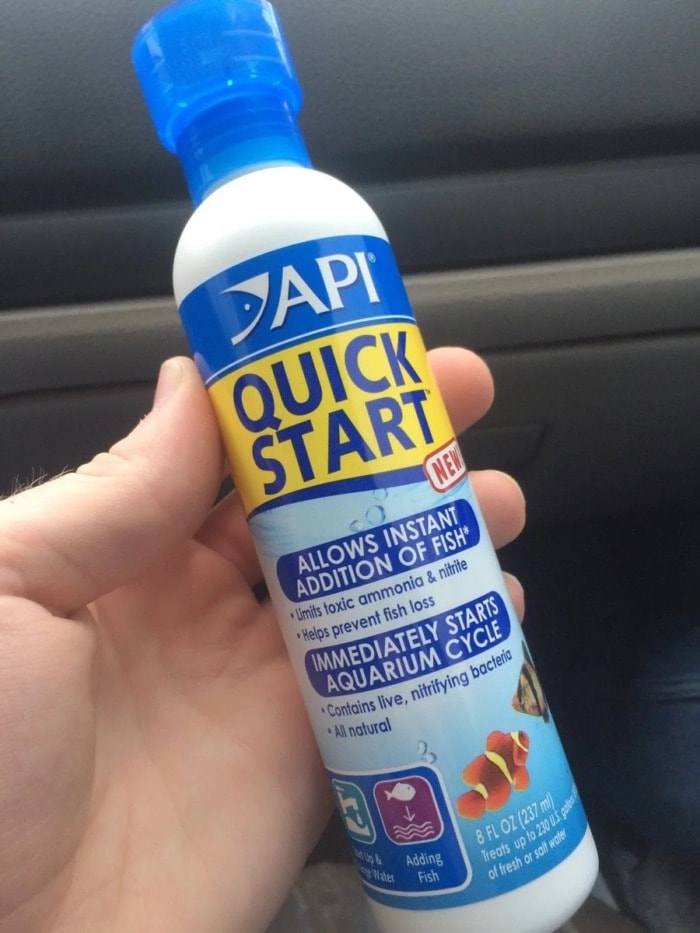 Tetra’s better at handling the nitrites (it virtually skips them) and API will normalize your ammonia levels quicker which, in an ongoing aquarium, is more important.

High ammonia levels may result in your fish staying at the bottom of the tank seemingly gasping in despair (click the link for an in-depth explanation of this behavior in Bettas).

The API Quick Start is more efficient when you have a planted tank as it does not handle the nitrite levels as well as Tetra’s SafeStart. Live aquatic plants prefer ammonia and nitrite over nitrate as their source of nitrogen so, by using API’s product you will both speed up the cycle and let your plants feed on the nitrite.

Note: Between Tetra SafeStart and Tetra SafeStart Plus the difference is only in the concentration of the bacteria. I’m really happy with Using the Plus version, so the instructions will remain the same.

API doesn’t have a saltwater version, you just double the dose.

What’s with the mixed opinions then?

Seeing how (upon proper use) the products kept proving themselves to me and others I spoke to, I can only conclude that.

Then again, the negative reviews pushed me to test them myself, before anything.

Fishkeeping is a hobby that requires some patience.

Whether you choose to go natural or use bottled bacteria products for starting a new fish tank, you will have to wait it out a bit.

There is no shortcut for that, there are only shorter cuts…

Tell me how things unfolded for your new aquarium in the comments.

390 thoughts on “Do (and How) They Work – API Quick Start VS Tetra SafeStart?”