Betta fishes made a name for themselves as the aggressive little fin-nippers that would not really tolerate anything else moving in their tank.

However, this reputation has already been disproven too many times because, as you’ll see for yourself, there are fish compatible with bettas.

Picking good companions for them to live together with is doable as long as you take into account the surrounding decor and the size of your tank.

For example, a betta fish will get along with certain tank mates in a 10-gallon tank but different ones will work in a 5-gallon tank.

What are these fish and how well will they do alongside bettas?

Know that having some live plants in there is essential for a stress-free setup.

Here’s a photo of a betta fish impatiently inspecting its new tank mates: 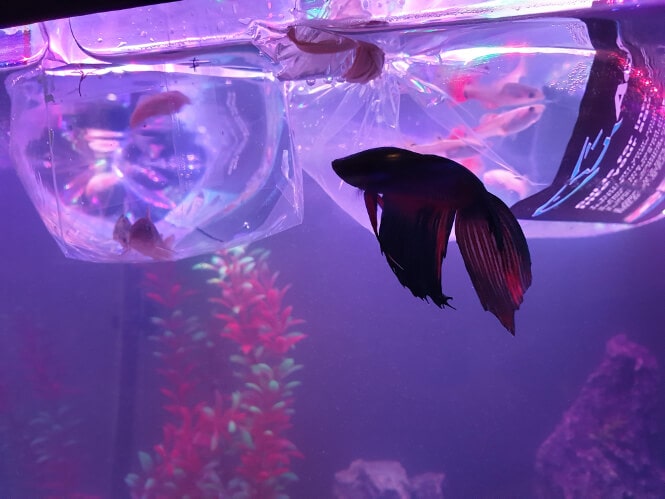 Truth is male bettas will be aggressive, but only towards other bettas or fish with similar aggression levels.

Because they were actually bred as fighter fish for a long time in the past they have inherited hostility, but only towards their own kind or very similar-looking fish.

They also come across as very territorial in the wild, so it’s difficult to establish if it’s a nature versus nurture situation.

Following these thoughts, a male betta will be hostile to other male and female bettas and should not be kept together in the same aquarium space.

Transparent dividers do not allow for physical damage but don’t really reduce the stress that comes with glaring.

Females can live in a so-called “sorority tank” because they do not seem to show animosity towards one another.

What are some fish that will get on with your Betta as its tank mates?

The best betta fish tank mates are non-aggressive fish that can swim fast and remain rather small. Listed below are only species that have worked more than once for myself or someone else. To be compatible and get along with a betta other aquatic inhabitants need to dwell different levels in the aquarium or to be agile swimmers.

Here’s what type of tank mates will work in a Betta fish tank:

The best choices as tank mates for a Betta fish are peaceful bottom-dwellers such as the rubber lip pleco or dwarf schooling fish that are fast enough to discourage chasings, such as the rummy-nose tetra, least rasbora and the Pristella tetra. In 3, 5 and 10-gallon fish tanks, having an abundance of live plants and hiding places significantly increases the chance of peaceful coexistence between the aquarium companions.

Note that the Betta is a territorial animal and it views newcomers to its home as intruders.

Research also suggests that the longer it has been living in isolation the higher the chance of aggression.

This demands that a Betta should be introduced last to the community aquarium, especially in smaller fish tanks where space is limited. Otherwise fin-nipping and aggressive behavior may occur.

It’s essential to keep schooling fish in groups of 5 or more or the bullying may turn the other way around.

That being said, here are fish that will live and get along with a Betta:

Note that some bettas will just be too aggressive in their nature and won’t really allow for any tank mates.

In the picture below you’ll see a betta peacefully coexisting with a small school of neon tetras in a 16-gallon fish tank: 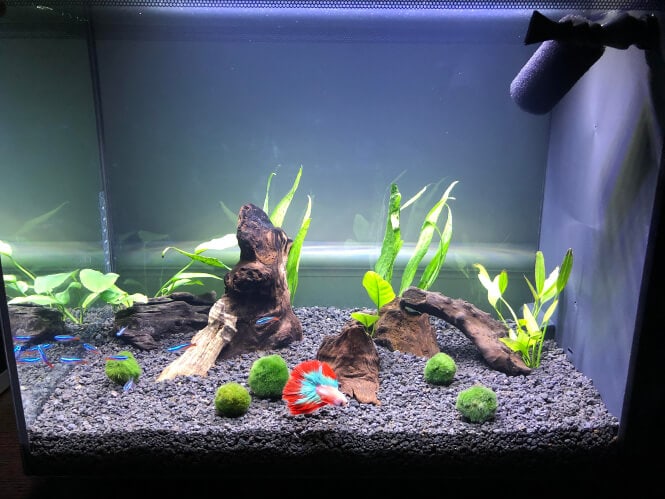 The beautifully designed aquarium in the above picture is the Fluval Spec Aquarium Kit, in case you were curious.

Top suggestions for a 3-GALLON tank

In a 3 to 3.5 gallon tank, the options for compatible companions are quite limited.

In such a small space, it’s absolutely crucial that you decorate the tank with heavy foliage.

Bettas are curious and like to scout around plants. If these are missing the fish may become bored which in turn leads to picking on whoever else is moving in its surroundings.

In a 3-gallon tank consider these as tank mates for your betta:

Obviously, as the bioload is limited choose either of these and not all of them together.

A picture of a betta fish peacefully hanging out with 2 Amano shrimp: 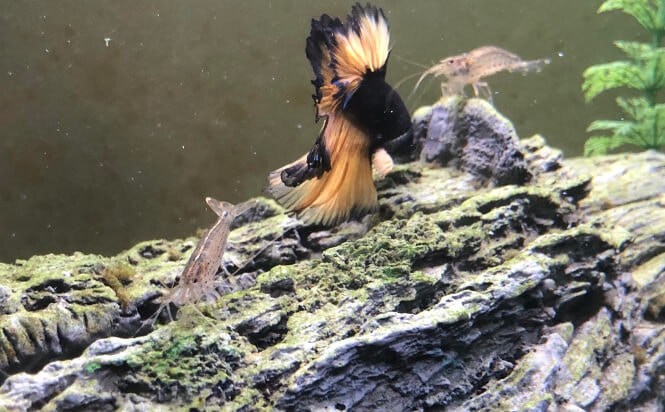 Top suggestions for a 5-GALLON tank

A 5 to 6-gallon betta tank gives you more choice in terms of tank mates. You can employ very small schooling fish and crustaceans.

The ones mentioned below rarely grow over an inch.

However, to avoid potential conflicts it’s essential that the tank is heavily planted.

Your betta fish will probably get busy exploring the plants or chill in a hiding spot. This way there will be no clear line of sight between the inhabitants and the chance for hostile encounters is down to a minimum.

Use driftwood, artificial caves or rock work for hiding places.

Here are some fitting tank mates for a betta in a 5-gallon tank:

It’s important to note than most of these recommendations are schooling fish and should not be kept in groups of less than 6. 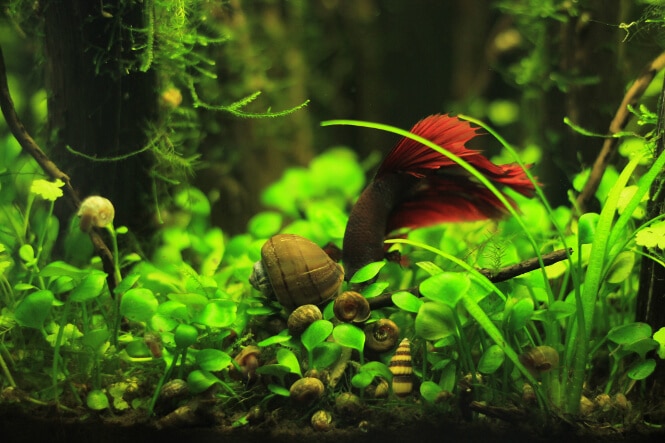 Top for a 10-GALLON tank

With a 10-gallon betta aquarium, there are a plethora of tank mates to choose from, really.

Mind that the rule about having many plants and hiding places still applies here. The biggest mistake I see new fishkeepers make is stuffing a betta in a community aquarium with poor decorations.

These fish need personal space and a place to retreat when they feel like resting. The key to having a conflict-free environment is to provide everyone with such places.

I’ve picked fast dwarf swimmers and docile fish that look nothing like a rival in this list.

Here are the best tank mates for a 10-gallon tank with a betta:

Same as before most of these fish will need to be in groups because of their social hierarchy.

Pepper corydoras make one of the best tank mates for a betta fish as seen in the following photograph:

Here’s how a betta tank with a couple of pygmy corydoras (bottom left) looks like in a 10-gallon fish tank: 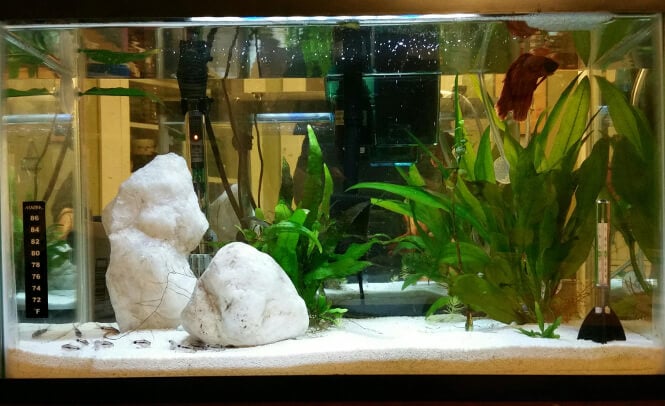 And another snapshot of a betta living with a school of neon tetra companions in their shared 10-gallon tank: 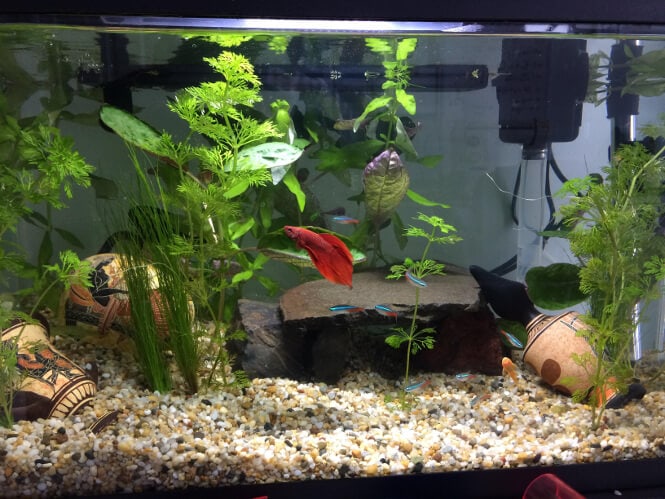 Top suggestions for a 20-GALLON tank

Keeping a betta in a 20-gallon community tank is the best possible setup for the new fishkeeper. The space is enough to allow for other fish to compliment the betta’s appearance without creating too much distraction.

The options for companions increase significantly and become diverse.

Mind that it’s still strongly recommended to furnish the community tank with hiding places such as driftwood, caves or dense aquatic vegetation.

Have a look at the tank mates suitable for bettas in a 20-gallon tank:

Calculate the possible bioload of your tank to not overstock it if you want to get more than one species of fish for this setup.

Here are two juvenile Kuhli loaches, being photobombed by a beautiful male betta in their 26-gallon bowfront community aquarium: 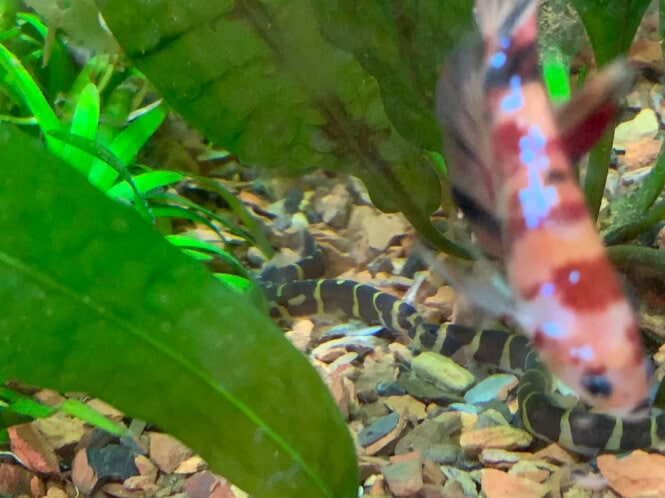 Busting the myths around perceived compatibility in community tanks

There are a couple of myths circulating the online space about bettas and their compatibility with the popular community fish.

Some are plain wrong and some have a skewed understanding of the real reasons behind them. Here are the myths around housing a betta with other community fish:

1. “Introduce your betta to the aquarium last.”

This myth implies that if you already have a solo betta you have a lower chance of successfully adding tank mates to its home.

Not at all correct.

Bettas are territorial and really do claim parts of the aquarium as their own. However, a simple rearrangement of the decor will force your betta to think that it’s a completely new habitat you’re putting it in.

Here’s how to get it to meet its new aquarium roommates:

If you don’t have a secondary bowl laying around then you can’t just drop the new residents in your existing betta tank, right?

Betta fish get irritated by the unfamiliar movements and excitement of new fish.

This may result in a violent response, which is actually frustration undercover.

It’s not a well-known fact that you can simply turn the lights off during the floating of the new fish companions and an hour more after the complete release.

This gives both parties time to calmly explore each other along with their aquarium surroundings.

Keep an eye out on what’s happening in the tank after adding the new fish. There may be some initial aggression. If it’s only a matter of glaring and chasing there’s a good chance that it will pass in the next few days. However, if there’s constant fin-nipping, then perhaps your betta is not yet ready to live with others.

Also, mind the water temperature requirements of each fish you’d like to add to your betta tank. Most Danios, for example, prefer colder waters, as well as the plecos. You can, however, strike a temperature balance in which all the aquarium mates would feel comfortable. If you’re housing danios along with a betta, the temperature should be diligently kept at 74.5 to 75° F. Make sure the tanks’ equipped with a reliable heater.

Prepare for the worst

In some rare cases it can’t be helped:

As I mentioned above some bettas won’t ever be able to live alongside other fish.

This is a species with a huge personality spectrum and that includes both ends.

If yours turns out to be a violent little villain then you should have a secondary tank to move him in.

Expect the best, but be prepared for the worst.

Shared betta tank issues and how to resolve them

They do, however, get bored.

If there’s no sufficient hideouts and interesting plants to explore they may decide there’s nothing better to do than chilling on the bottom.

There are many other reasons for that (I linked you to an article where I describe them) but it most often happens because of lack of decor.

When living with others in nothing but an empty tank your little guy can become stressed from too much socializing and end up on the bottom again.

Always add lots of plants and hiding places to your betta tanks.

If you’re in the middle of your research and want to employ multiple companions for your betta you should definitely consider getting a larger tank.

If you’re in this phase of research I invite you to have a quick look at my guide on more beginner-friendly aquarium kits for new betta owners.

I made sure these tank kits have everything these fish would need. I’m also listing some more spacious options because I know they work better.

Visit the link and look at the 10 and 20-gallon tanks. These aquarium sizes are the best for housing multiple companion fish with a betta.

All of this is not rocket science and with the right approach, you can almost guarantee success. Many have done it before you, and now it’s your turn.

Choosing tank companions that will live in harmony with your betta fish takes nothing more than patience and being well-informed.

Tags: fish that get along with betta

93.68% of the readers found this article helpful.

Tap a star to leave your vote:

Why do Betta Fish Flare Their Gills?

How Long Can Fish Go Without Eating Any Food? (+ Chart)

Momchil has had his fair share of aquarium care in the past 13 years. During this time he has made MANY mistakes and thus learned A LOT. In Aquanswers, Momchil shares knowledge about freshwater and saltwater home aquariums with the people from his community.

Aquanswers.com is a participant in the Amazon Services LLC Associates and other affiliate advertising programs, designed to provide a means for sites to earn advertising fees by advertising and linking to Amazon.com or other websites of the like. As an Amazon Associate I earn from qualifying purchases.