In the eyes of outliers, fishkeeping seems pretty straightforward.

Unlike experienced aquarists who play it safe, they believe you can just get some fish, use tap water to fill your fish tank, and put them right in.

The reality is that water from the sink needs to be conditioned before you can use it in an aquarium because it contains a bunch of chemicals. There are also different kinds of water that can be used as an alternative, but before we get to them let’s first answer the question at hand.

Can you use tap water for a fish tank?

Of all the various sources of water, one can use for an aquarium, tap water seems like the most practical one.

However, is using tap water really such a great idea, or is there something fishy about it?

Here’s if you can use tap water for your aquarium:

Water treatment facilities use chlorine and chloramine to disinfect tap water from disease-causing bacteria. These substances also kill the good bacteria in a fish tank and disrupt its nitrogen cycle. Because of this, tap water can only be used for pet fish if it’s dechlorinated first.

Furthermore, chlorine and chloramine have a direct impact not only on the colonies of beneficial bacteria, but on fish as well. When fish get exposed to chlorine, the substance enters their bloodstream and starts destroying their cells.

This leads to burns all over their bodies that could subsequently affect their gills and kill them. Even if they survive the initial shock, they would be severely stressed and wouldn’t live for long.

Related: Why do fish die or get stressed after a water change?

I think I’ve given you enough reasons why using water straight from the tap is a bad idea so let’s take a look at the different ways you can dechlorinate it and add it to your tank.

How to dechlorinate tap water to make it safe for fish?

1. Use a water conditioner 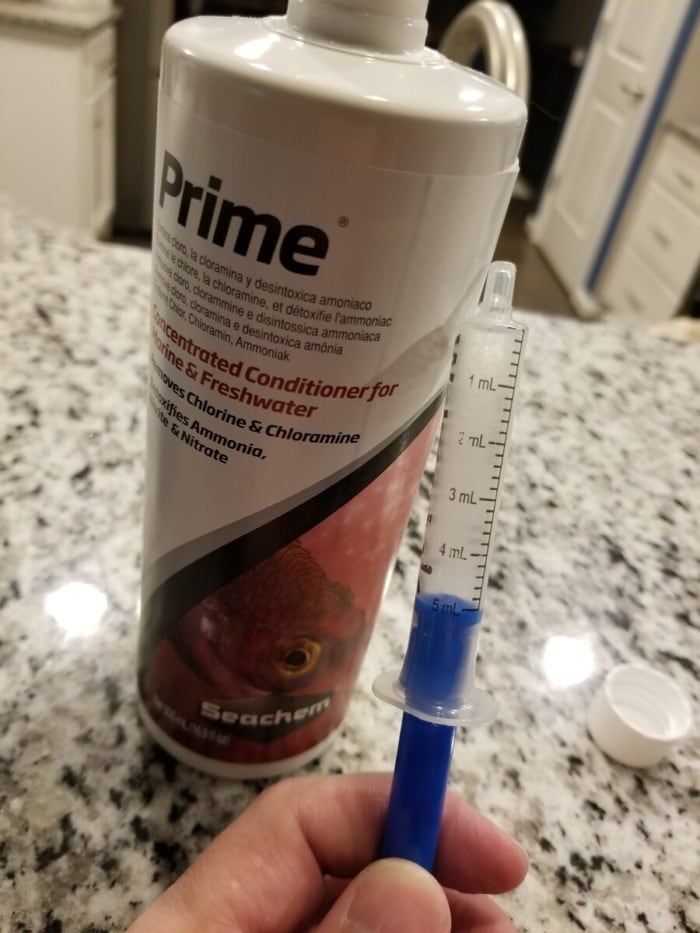 The most popular and effortless way to dechlorinate water is by using a water conditioner such as Seachem Prime. All you need to do is add the advised amount of conditioner to the water and let it do its magic for a minute or so.

I do try to recommend Prime to beginners in the hobby because it’s easy to use and it can save them a ton of headaches. I also use it myself because I think it’s unrealistic to keep a piece of the ocean at home without the help of some smartly-designed chemicals.

However, some people do not like the distinct sulphuric odor of water conditioners and prefer to dechlorinate their aquarium water naturally.

If you also want to make your tap water safe, without the use of any conditioners or chemicals, then you can try one of the following methods. 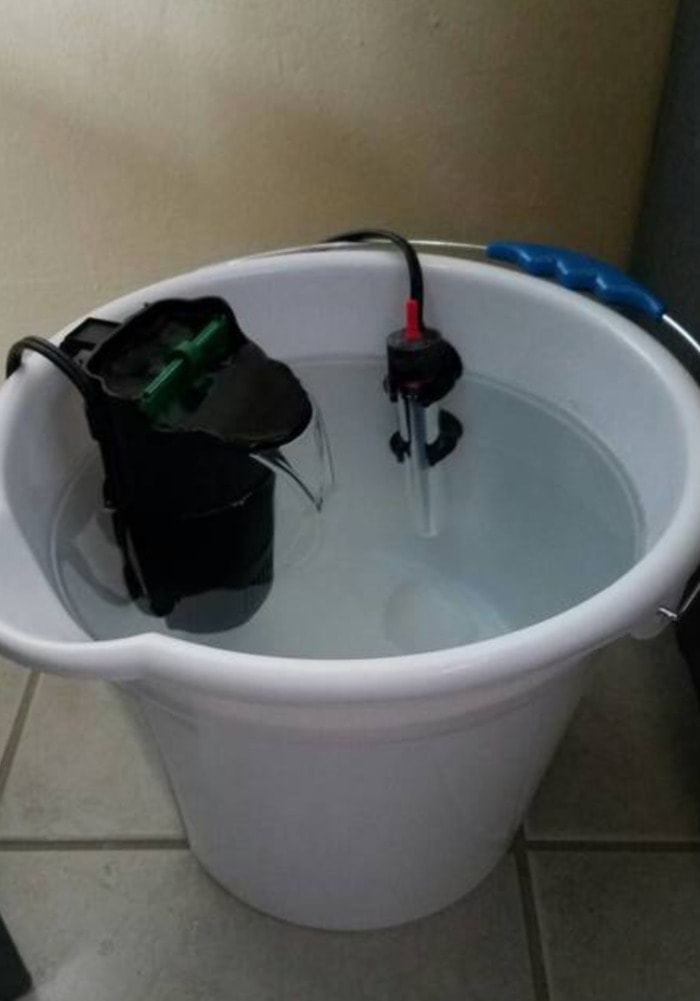 A lot of online sources recommend letting your water sit still for 24 hours as means of purification.

While their claims do hold some merit, they fail to acknowledge the numerous factors that affect the evaporation times of chlorine.

The evaporation times of chlorine and chloramine are closely linked to UV light exposure, circulation, and aeration.

Furthermore, some water facilities may use larger amounts of chlorine or even chloramine instead, so going by the “24-hour” rule alone will get you nowhere.

I’ll use an example to show you how combining some of these factors to your advantage can have a dramatic impact on evaporation times. If you let 10 gallons of water sit still in a dark room with a little aeration, it may take you up to 55 hours to fully dechlorinate 1 ppm (parts per million) of chlorine.

However, this time could be drastically reduced, if the water is under circulation and is exposed to ultraviolet light. Ultraviolet light forces chloramine and chlorine to gas off water at a significantly faster rate, while the water movement speeds up the process by giving it contact with the air.

To achieve these same effects, simply put the water in a glass container with a filter or a wave maker and let it run for as long as it needs to. Visit the link to see some data I’ve gathered on the time needed for chlorine and chloramine to evaporate from tap water. 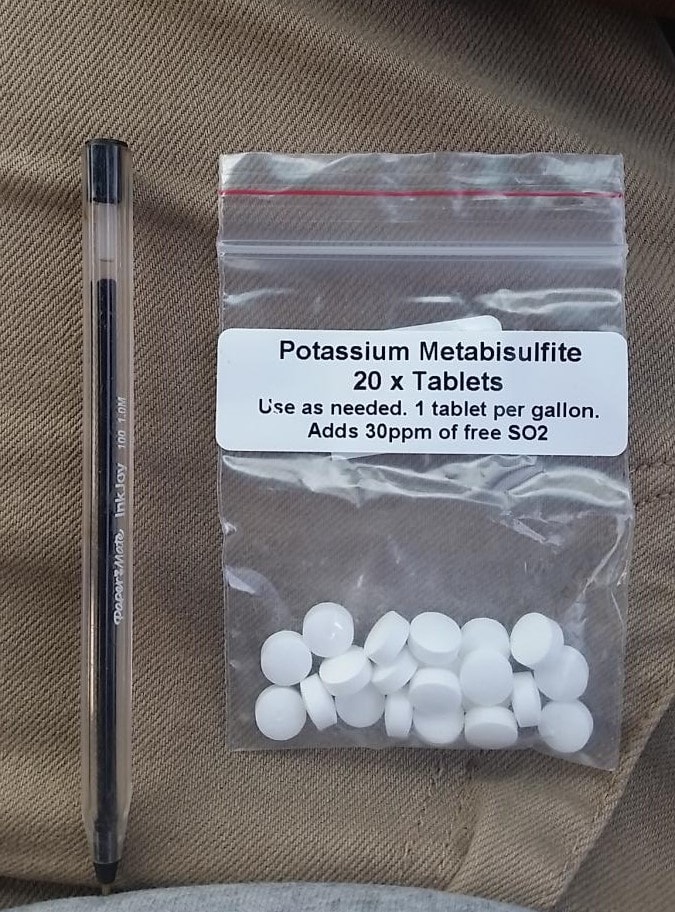 Campden tablets (Sodium or Potassium Metabisulfite) are a key ingredient in beer, wine, and cider brewing.

They are used for water sterilization because they kill bacteria and inhibit yeast growth.

How is this relative to fishkeeping?

Well, as an added benefit, these tablets also purify water by eliminating free chlorine and chloramine.

The downside to this method is that these tablets are hard to come by unless you live near a specialized brewing shop, in which case, I would really envy you.

4. Boil it and wait for it to cool off 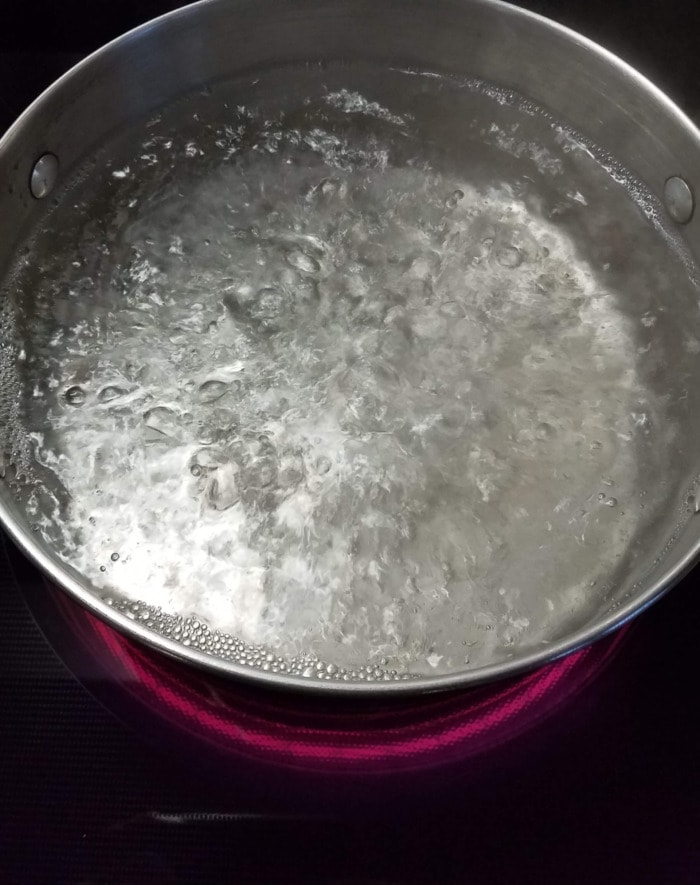 Boiling can be a relatively fast way to purify your water, depending on whether you’re dealing with chlorine or chloramine. One ppm of Chlorine dissipates from boiling water in less than four minutes but it would take more than an hour for the same thing to happen if your water is disinfected with chloramine.

This is because the chemical structure of chloramine contains an ammonia bond, which isn’t present in chlorine.

This additional bond makes it far more stable to higher temperatures and is also the reason behind ammonia spikes after dechlorinating water with a commercial water conditioner.

Due to these vast differences, it’s advisable to contact your local authorities and check to see which compound they’re using for disinfection.

Otherwise, your attempts to boil the chemicals away would be nothing more than a shot in the dark. 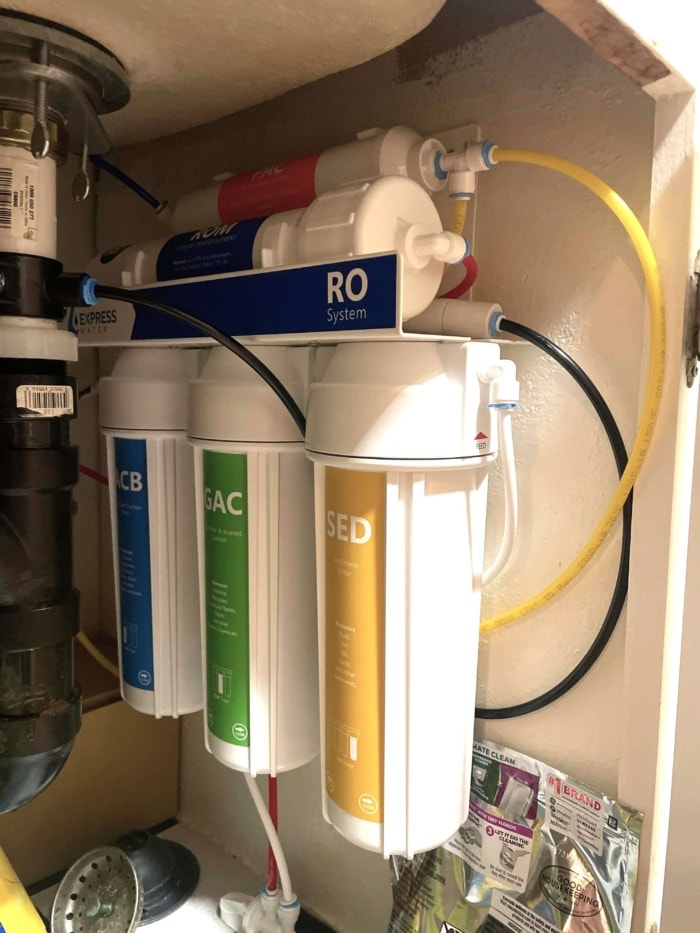 In reverse osmosis, there’s an outside pressure that overcomes the osmotic pressure and moves the solvent in the opposite direction, forcing the solvent onto the pressurized side of the membrane.

This purifies the water by leaving the particles which are too large trapped on the other side of the membrane.

Reverse osmosis systems remove 90 to 99% of the impurities in water, but they also filter out minerals. Without any minerals in the water, the osmoregulation of fish gets disrupted which eventually leads to their demise.

That’s because osmoregulation is the process that controls fluid retention in fish and their mineral uptake from their surroundings.

In short, if you’re going to use this method, you would need to remineralize the purified water, before adding it to your tank.

To purify your tap water through reverse osmosis, you would need a specialized Reverse Osmosis and Deionization unit. Even though they aren’t cheap, these systems are great at reducing phosphate levels and minimizing the risk of algae outbreaks. 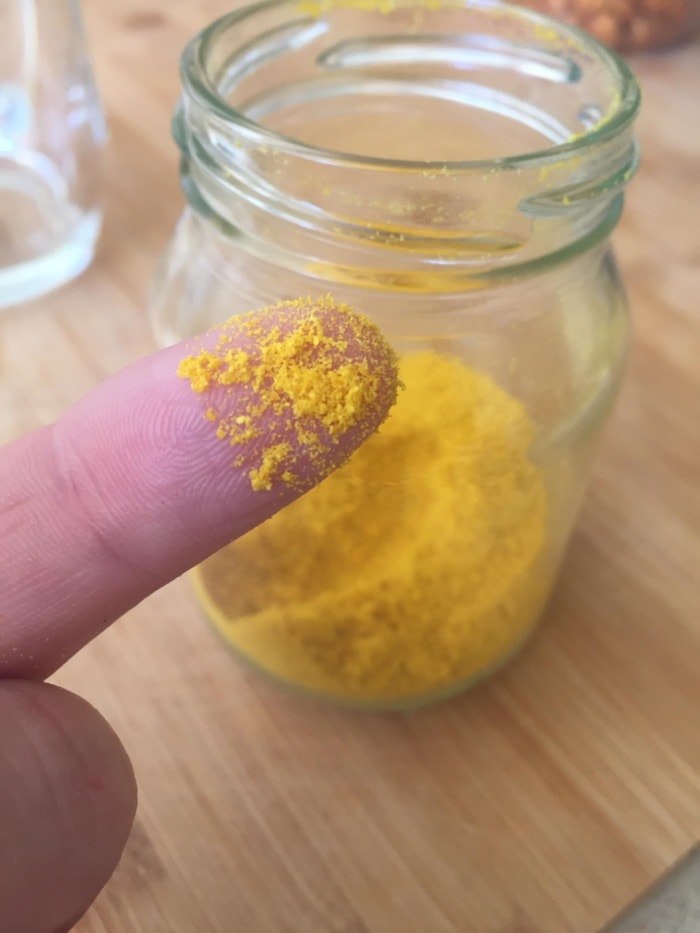 Vitamin C, as it turns out, has many other practical applications than just fighting off the common cold, and one of them is to clean large amounts of water from chlorine and chloramine. In fact, the U.S. government recommends it for neutralizing chlorine in water systems as it’s safe for marine and aquatic life.

To prepare the water for your aquarium using this method, you would need to add 2.5 parts ascorbic acid per 1 part of chlorine.

It will take approximately five minutes for the vitamin C to take effect and purify the tap water from any chlorine.

For chloramine, however, you would need about 40 mg of ascorbic acid per gallon of water to achieve the same result.

Bear in mind that vitamin C may lower the ph of your water, so it’s a good idea to test your water parameters for any changes after dechlorinating it this way.

What other types of water can you use instead? 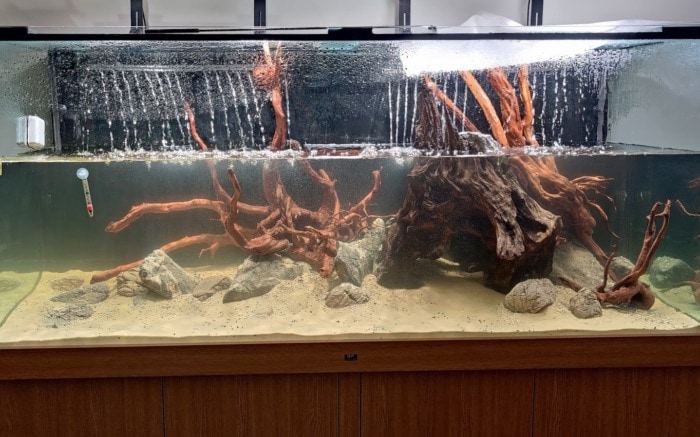 Apart from tap water, there are several other kinds of water you can put in your tank.

Each of them, however, has its own pros and cons. Let’s see how they compare:

Distilled water is water that has been collected after first being turned into steam. This destroys bacteria and purifies water from chlorine and other harmful substances.

Purified drinking water can be bought from any grocery store and isn’t all that expensive. Unfortunately, you can never be sure if the brand of water you’re purchasing was distilled by using copper pipes. Studies have shown that exposure to copper has adverse effects on fish health, so it’s better to avoid using distilled water which is sold commercially.

Furthermore, to be safe for fish, distilled water needs to be remineralized as it gets stripped from its minerals during distillation.

Another possible, albeit not so practical option for your tank, is bottled mineral water. Bottled mineral water typically contains over 250 ppm of TDS of trace minerals. Its mineral content makes it a great choice for freshwater aquariums with fish that thrive in hard water.

This spares you a lot of the unnecessary tinkering with water parameters you would otherwise have to do.

Or at least you would think so.

The mineral measurements of bottled water can sometimes be unreliable, and there’s also no guarantee whether the water has been treated with chlorine or chloramine.

Bottled mineral water is also more expensive than regular tap water so it may not be the best option if you’re on a budget.

Spring water is any type of water that originates from an underground source around soil or rock beds.

The mineral contents and ph of springwater vary greatly depending on the aquifer or spring the water comes from.

This type of water is usually hard and suitable for some fish species, like most live-bearers.

Due to its variability, I wouldn’t recommend blindly using spring water for your aquarium unless you’re familiar with its Calcium and Magnesium contents.

Also, carrying 50 gallons of water from the store isn’t the most practical thing you could do.

To provide a suitable environment for our fish, we must jump through a lot of hoops and dechlorinating tap water is just one of them.

However, even though they have no way of showing it, our pets surely appreciate all of our efforts.