Because of their attractive appearance, and algae-eating habits, pleco pets would often draw the attention of both beginner and advanced aquarists.

When I first stumbled upon these catfish, I didn’t have a realistic idea of how big the plecos could get.

I had a 10-gallon tank and I was looking at a 2-month-old Common pleco with a size of 2 inches at the pet store.

To me, it seemed that my tank was big enough to house this small Plecostomus.

Little did I know that the species I was looking at could grow up to 24 inches and would even outgrow a 55-gallon aquarium.

Naturally, after returning it, I started looking for smaller pleco alternatives.

In this guide, you will find a chart that contains the maximum size of different types of pleco fish that are found at pet stores – both small and large.

From the huge Orinoco Sailfin Catfish to the smaller bristlenose and clown species, my list will help you get the pleco that doesn’t grow too big and perfectly matches your tank’s size.

How Large Do Plecos Get?

When discussing how big these fish get, it’s good to know that the word “pleco” is used to describe representatives of the largest catfish family, called Loricariidae.

There are more than 680 species in the Loricariidae family that vary in size and have different aquarium setup requirements. Therefore there’s no one simple answer to the question at hand.

Furthermore, the size of your pleco fish doesn’t only depend on the exact species you own.

It depends on the conditions in which you’re keeping your new aquatic pet.

If you provide your catfish with a healthy environment it will likely grow to the maximum size for its species.

Here’s a summary of how big different plecos typically get:

The maximum sizes of plecos vary widely – from 2 inches to 28 inches of body length (5 cm to 71 cm) across different species. For example, the Common Plecostomus may reach up to 24 inches (61 cm) and some large Sailfin plecos may grow over 27 inches (68.6 cm). Meanwhile, there are smaller pleco species that have a full-grown body size of between 2 and 6 inches (5 cm to 15 cm). Among these tiny plecos are the Dwarf, Clown, Bristlenose, and Pitbull plecos.

Unlike their larger cousins, the small species don’t require huge tanks because they remain miniature throughout their lifetime. Some of them can even live comfortably and healthy in a 10-gallon aquarium.

Anyway, below you can find something like a chart of the popular small and large pleco species and their maximum sizes:

Do these fish grow to the size of their tank?

As an aquarist with experience, I’d sometimes get asked by beginners if plecos grow to the size of their tank.

There is a common misconception that a common plecostomus can be kept in a 10 to 30-gallon tank.

The belief here is that the fish will somehow adapt to the tank’s size and not grow as big as other representatives of its species.

Nevertheless, this is far from the truth.

Whether plecos grow to the size of their tank is partly influenced by two factors:

Firstly, the full-grown size of a pleco mostly depends on its species. Secondly, keeping your plecostomus in an inadequately small tank can hinder the development of a naturally large species to a degree, and could therefore stop it from reaching its maximum potential.

Nevertheless, if it has the potential to grow big, your fish will still outgrow its aquarium and you will eventually need to move it to a larger tank. By doing so you will alleviate your pet’s stress levels and provide it with a healthy environment to live a complete life.

Author’s note: The smaller tank size isn’t the primary cause for stunted growth in fish, but is indirectly affecting it.

There is, in fact, evidence that lower oxygen levels stunt the growth of fish. The oxygen levels in your home fish tank would always be lower compared to the waters that a plecostomus inhabits in the wild.

Bodies of water in the wild have a bigger surface area which is why they are very well-oxygenated by definition.

We can increase the oxygen levels in our home aquariums by encouraging some agitation of the water surface.

Nevertheless, no matter how big of an effort we put into supplying our aquarium water with oxygen, it just won’t reach the levels of the fast-flowing rivers plecos inhabit in the wild.

Keeping an aquarium well oxygenated is even harder if the tank itself is smaller, as there’s less surface area.

Nitrate building up hinders the growth of your fish.

Freshwater fish are more sensitive to nitrates compared to marine fish. Exposing your plecostomus to higher levels of nitrate can hinder the development of its body mass.

Furthermore, plecos generate quite a lot of fish waste, which is why the nitrate build-up happens at an even higher pace.

Suggested: Canister Filters for the Gallon Capacity of Your Fish Tank.

In freshwater aquariums, we remove nitrate through regular water changes.

If you’re keeping a bigger pleco specimen in a tank that’s too small for it, you will find it a bit hard to keep up with the accumulation of Nitrates timely. This could also lead to what’s known as Nitrate poisoning.

You should avoid generating needless stress and hindering the development of your aquatic pet.

That being said, keeping the Nitrate levels within a healthy range of 5 ppm to 10 ppm is ideal. 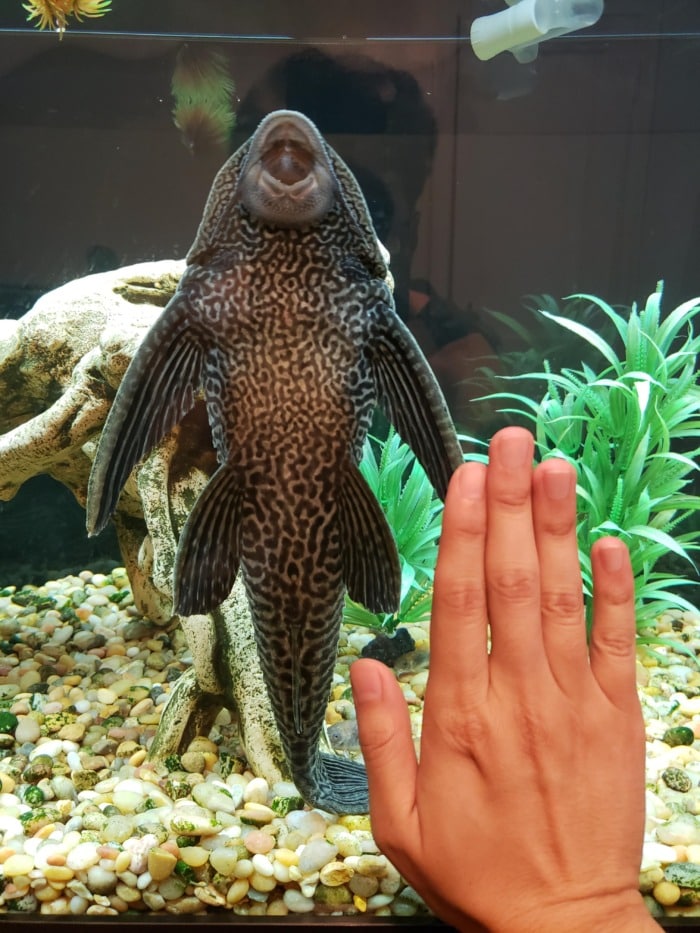 If you’re keeping a 2-inch baby Hypostomus plecostomus in a 10-gallon tank, bear in mind that you’ll soon need to move it to a larger aquarium.

Common plecos usually grow by 1/2 inches (1.3 cm) per month during their first year.

After that, it will keep growing until it reaches its maximum size of 15 to 24 inches.

I recommend always researching the species’ maximum size when choosing your fish. If your pet fish doesn’t grow as fast or as big as it should, then you’re likely keeping it in an unhealthy environment.

This may negatively affect your pleco’s lifespan, which is usually between 10 and 15 years for representatives of the Hypostomus plecostomus species.

Even if your pet lives, this doesn’t mean that it lives a happy life.

Surviving doesn’t mean thriving, so make sure you provide your aquatic buddy with a stress-free environment while it lives.

One of the more common mistakes I see is aquarists keeping their common plecostomus fish in a 55-gallon tank. To make sure your big pleco is truly thriving, I recommend keeping this specimen in a 100-gallon large tank with lots of caves, plants, and driftwood.

The good news for those with limited tank capacity is that there are smaller pleco species that can be kept in 10 to 30-gallon aquariums.

For example, the largest Bristlenose pleco species have the same growth rate as common plecos.

However, the Bristlenose reaches a maximum size of 6 inches (15.2 cm).

Therefore, this species may be perfect for a 30-gallon tank.

By knowing how much the big plecos grow, you can choose a species that matches your new fish tank setup plans. Over the years I’ve kept quite a few of these fish. I love their personalities and how their exotic looks contribute to my home tank.

Plecos are also a great addition to community aquariums. However, even though most of them are peaceful and friendly, they’d sometimes eat the protective slime coat layers of other species, such as goldfish and bichirs.

So do proper research when choosing their tank mates.

With that being said, I hope that you found my article helpful.

Leave me a comment below if you have any questions!