If you own a spike-topped apple snail then you know they can act mysteriously.

You’ll eventually witness any Mystery snail floating around for hours or days, and sometimes even hanging out of its shell while doing so. This can either happen at the top of the aquarium or in the middle water column. But is it dead? Or this is another weird character trait?

Knowing what to do when you notice your aquarium snail lifelessly floating back and forth is important as it may indicate issues with the water in the tank.

Why is my aquarium snail floating?

Mystery snails are well known for their unusual behavior, especially when it comes to escaping the aquarium without a trace or their acrobatic tricks, such as jumping off the tank’s walls.

However, most water snails may occasionally find themselves afloat.

Confirmed reports I’m aware of include not only Apple snails but also Ramshorn and Bladder snails.

With that being said, here are the most common reasons why your aquarium snail may be floating:

An aquarium snail may be afloat at the top of the fish tank because of a sudden change in water parameters. The snail deliberately traps air in its shell and floats away in an attempt to change locations. Another reason for floating may be the search for food on the water surface. In some cases, if the floating lasts for more than a couple of days, it may be an indication that the snail is ill or even dead.

1. It’s stressed from a change in the water’s parameters. 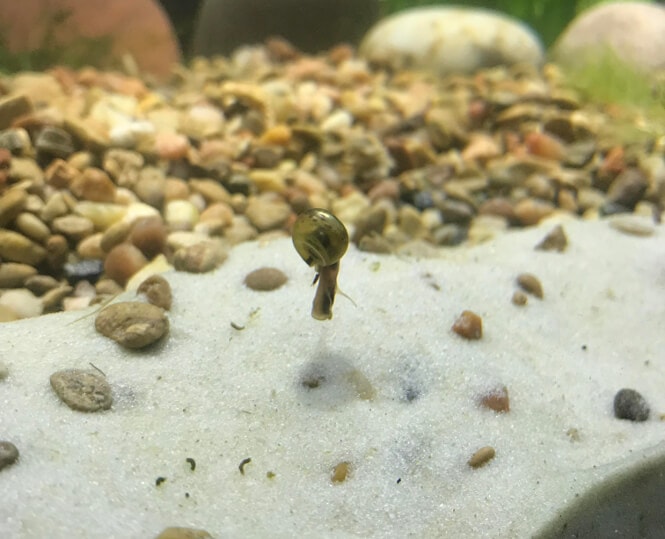 Mystery snails can float at the surface of the fish tank if they are not comfortable with the water parameters.

The floating is an escape mechanism they’d use in the wild to get away from pollution.

If that is the case, you will see them continuously trying to either escape the aquarium or to hang out of their shell.

Both are a reflection of their survival instincts, and since they can’t do anything about the water quality, they will try to float away by using the current.

Usually, a snail would begin to float right after a large water change or if it’s just been introduced to the aquarium.

This happens because the snail becomes somewhat stressed from the sudden change in water parameters.

More often than not the parameter that’s causing the stress is either the temperature or the pH of the water.

2. It has been poisoned by copper from a fertilizer.

Small amounts of Copper are beneficial for aquarium plant growth, however, in higher doses, it is deadly to invertebrates such as snails or shrimp.

If you’ve been inadvertently dosing an aquarium fertilizer with copper to the fish tank your snail has likely been poisoned.

Snails may float when feeling sick or dying. A good indication that an aquarium snail might be ill is the creature hanging out of its shell, without trying to attach to anything.

In this case, you should immediately relocate it to a tank with crystal clear water.

Another sign that the snail is being poisoned by something is the prolonged floating of days or even weeks.

Note that some aquarium plant fertilizers contain copper in a safe range for invertebrates. Learn more.

3. It wants to change locations.

Aquarium snails, in general, are known as slow-moving species, yet sometimes they use a small trick to move faster from one location to another.

Some snails, such as the Mystery snail, which is a type of Apple snail, can hold air into their lungs and that’s just natural behavior for them.

When sharply closing their shell, a small amount of air gets stuck in there in the form of a bubble.

They use it to start floating to another location.

Once they open their shell and the air is released, they sink.

Sometimes they may close their shells due to aggressive tank mates or a strong filtration system.

This type of behavior is normal for them and it is the most common reason you see them floating around the aquarium while being alive and well.

They may do it quite regularly.

Such behavior may also be seen in smaller species of aquatic snails such as the Bladder snails, and sometimes, Ramshorn snails as well.

Holding air in their shells is a conscious decision that the snails make when they want to float.

4. It seeks food on the water surface.

If your small-shelled friends are hungry for some protein film, they may go on a floating quest for food.

They will purposefully float to the top of the fish tank and remain attached to the water surface, upside-down.

When the aquarium is well established with some fish, and some live plants or algae, snails will have enough sources of food.

Nevertheless, if you have a new fish tank or your established one is populated mainly with snails, you will often see them floating on the top of the water, eating a thin surface film.

The film itself is composed of leftover food particles and proteins coming from live plants.

This film is harmless to the aquatic snails and other tank inhabitants, and it’s also a Mystery snail’s favorite snack. 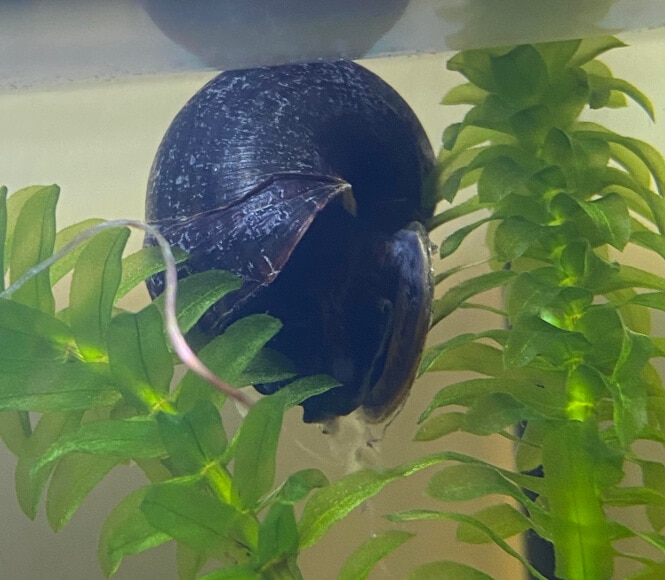 Aquarium snails will float when they die of old age.

If you haven’t been looking after yours since it was a baby, it may be that the fish store sold you an older snail.

Mystery snails, for example, live for about a year in normal aquarium conditions. Pristine water quality may prolong their life span, but that rarely happens.

A snail will often begin to float just hours after being added to a new fish tank.

Wait a bit, and rule out the possible shock from the change in water parameters before concluding that the snail is dead.

What to do to help your aquarium snail return to normal?

First of all, you need to be sure you know what is the reason behind the floating.

How to tell if my snail is dead?

The most certain way to tell if a snail is floating because it died is by examining it closely and smelling it.

The biggest sign a snail is dead is a bad smell coming from its shell.

You can also softly touch its muscular foot a few times.

If you see the body closing up in the shell, the snail is alive and well.

If the body doesn’t move or hangs out of the shell, the snail has likely passed away.

Once you are sure your snail is dead, you need to remove it from the aquarium as quickly as possible.

A partial change of the water will likely be necessary, as otherwise, you risk the health of the other aquatic inhabitants.

It may not be as bad as it appears

Observing an aquarium snail who floats here and there in the aquarium is entertaining.

If this happens often, however, you need to inspect whether there’s an existing problem in the fish tank.

If everything seems fine, then accept that your Mystery friend might be having some fun as part of its quirky nature.

4 thoughts on “🐌 Why is My Aquarium Snail Floating?”