I wish someone told me how to handle my first hammerhead and save me the time spent in researching.

I couldn’t know, for example, that the hammerhead coral growth rate would force me to relocate the thing soon after getting it.

I learned that when dealing with LPS corals flow intensity can be the difference between life and death.

Finding the right position for hammerheads can be difficult because they are as aggressive as they are fragile.

The wrong place in your aquarium can result in your hammer coral not opening at all. Not to mention damage to your other corals. Let’s just get straight to the point.

The hammerhead (also known as a hammer or anchor coral) is part of the Euphyllia genus and is very hostile by nature.

It is a Large polyp stony coral (LPS) which means it has a sharp calcium carbonate-based skeleton and pronounced soft polyps. It comes in many different colors, that will appear fluorescent under dark light.

Here’s what you need to know before placing a Hammerhead coral in your fish tank:

When positioning a hammer coral, flow and lighting should be taken into consideration. The light should be medium – PAR leaning to the Royal blue spectrum – and not coming from metal halides. There should be some flow (low to medium), but not a direct one. Placing the coral at medium tank level will work, as it tends to expand more there, unlike on substrate. Be sure that it’s placed at least 7 to 8 inches away from other corals as its tentacles (sweepers) will extend up to 6, during the night. 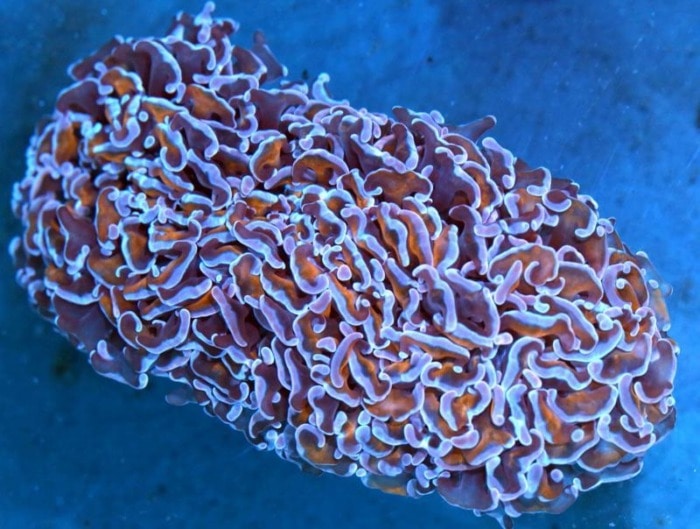 The sweepers will sting other corals, being especially hurtful to the SPS ones. These corals can gradually adapt to any lighting later on.

Tip: Note where the coral was at the fish store and try to recreate that if in doubt.

You can experiment by monitoring the retraction.

If the coral expands – there you have it, it feels comfortable.

It also likes being around frogspawn a lot. Branching hammer corals do very well on mid-rock work.

Experiment with the placement until your Hammerhead Coral feels comfortable

Don’t be afraid to experiment, as I did.

At first, I put my hammerhead higher in my tank, positioning it middle to top on my rock work.

A higher flow was present there making it jiggle a lot, which seemingly, it didn’t like.

The polyps were very retracted, so I switched to the bottom of the tank where the light was lower.

Now there was flow again, but not direct.

Just 2 hours later it expanded all of his polyps and it seemed really happy. 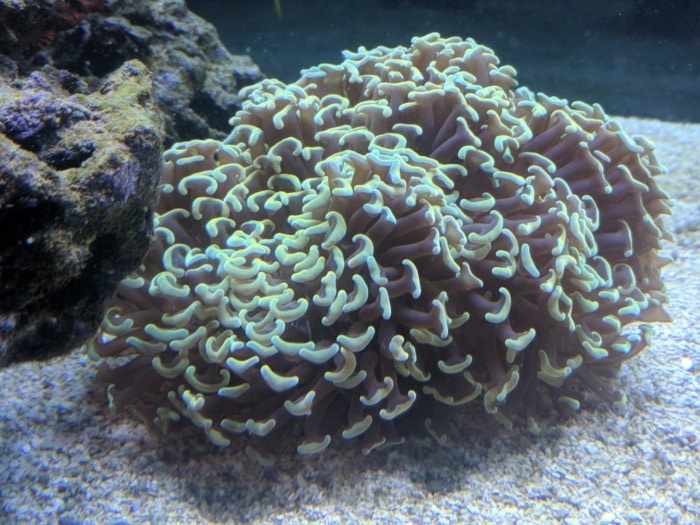 With time I’ve found that even top-tank level would work, as long as the flow is not direct.

I am also positive that these guys enjoy a somewhat pulsating flow.

There are many opinions online on what light a hammerhead will need.

The truth is they will tolerate almost any light intensity as long as they are gradually acclimated to it.

I started with what I know to be medium PAR lighting but eventually, I played around with positioning and lights.

As long as I slightly alter the position, lighting wasn’t really an issue.

Move it too close to the source of light too fast and you may end up bleaching it. 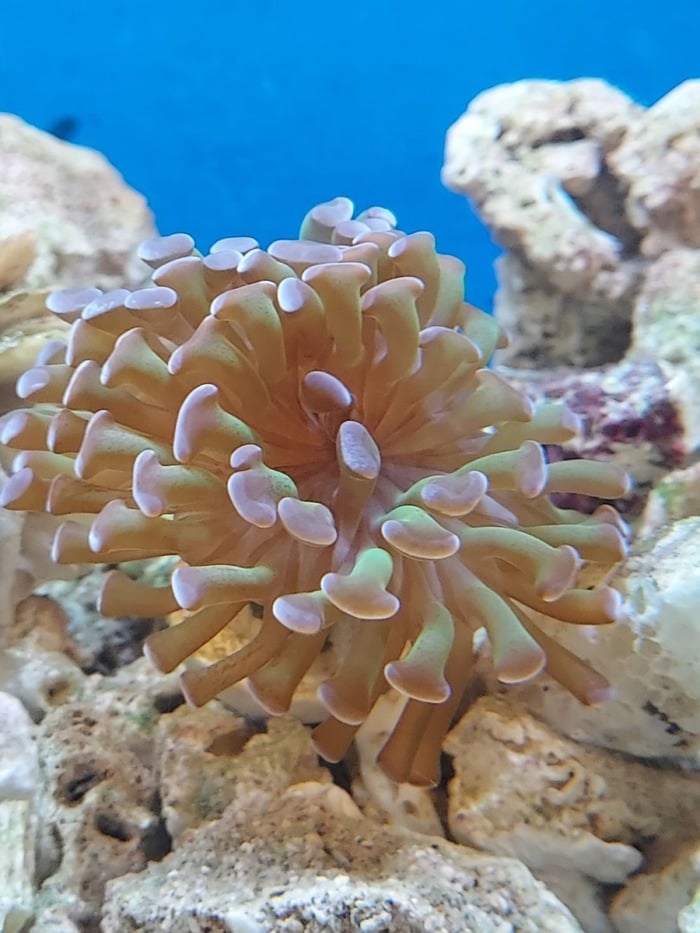 Note that it’s not just about PAR, but rather PUR.

What do I mean? I discuss this in detail in my guide on LED aquarium lighting over here.

Here’s what I found:

The more light it gets the stronger the coloration and the less flow there is the more it will expand. If you want a really bright, vivid color you should eventually provide it with more light.

Remain patient as a quick change may stress your hammerhead coral.

You should start with a medium to low light.

Each month you can scale up the intensity, by moving your coral closer to the top of the fish tank.

As much as I believe this goes without saying – do not place your hammerhead coral in a shady place.

They don’t do well under indirect light.

Related: LED Lights for Growing LPS and SPS Corals Like a Pro

Compatibility with other corals 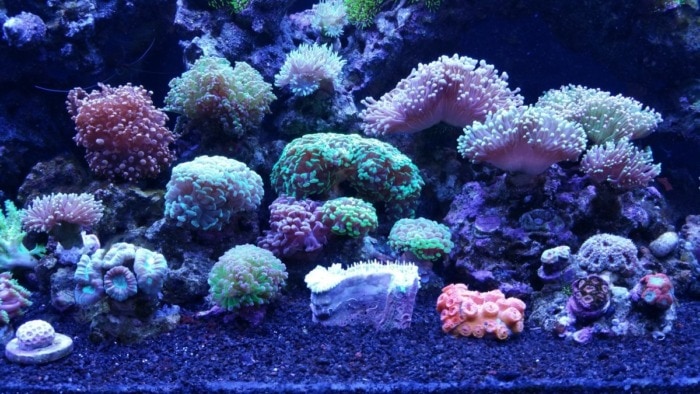 I had a frogspawn before getting my hammer and I was concerned if they could touch each other without harming one another.

These are very aggressive corals, so the last thing I needed was coral terrorism in my fish tank (my super evil maroon clownfish was enough of a bully already).

My research showed that Euphillia is friendly to their genus and won’t hurt a cousin.

So I went on with that and got my hammer coral, placing it in close vicinity to my frogspawn (also Euphyllia) while hoping for the best.

Guess what – they were super happy with each other.

They expanded as usual throughout the night but there was no apparent damage to either.

I think they were even “hunting” together, so to speak.

My experience with Torches shows that it should be safe too, likely because it’s part of the same genus.

However, a very experienced friend of mine told me that torches are usually the most aggressive of all Euphyllia and would sometimes get in a fight with hammerheads and frogspawns.

This would happen if they grow large enough, battling for living space.

Giving them enough area to grow and not letting them feel crowded would eliminate the problem.

Let me know about your experience with that.

Then again, hammerhead corals will try to sting your other SPS corals.

They can kill another species of coral overnight.

Ask me how I know.

That’s why I place them no less than 7 inches away from other corals.

I also make sure to anchor them well in their place, ever since that one time, a hammer got blown away by the flow.

I use a combo of epoxy putty and aquarium safe super glue (a link to a more in-depth explanation on super glue safety) to attach it to rocks.

A few tricks I learned about Hammerhead coral care 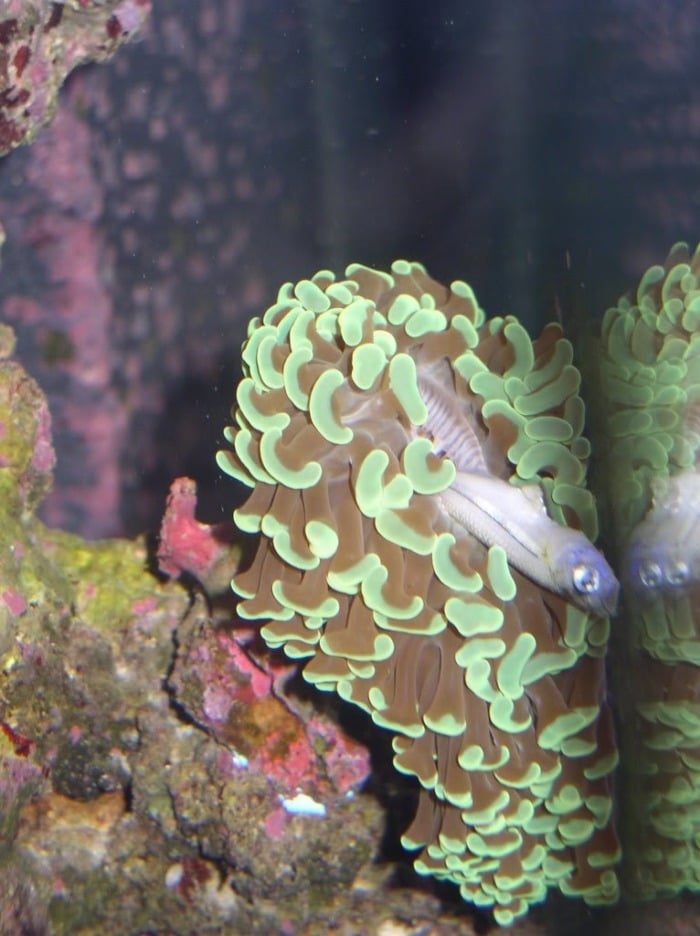 The hammer coral feeding habits are something to consider.

To avoid excessive expansion feed regularly, as these corals will become really aggressive when hungry.

If you keep them starving long enough the tentacles may extend up to 10 inches in search of food!

I haven’t witnessed such a range of extension with mine, but there are reports out there claiming that it happens.

In my experience, these corals also do better in softy tanks (softy meaning with soft corals).

I have seen them enjoy themselves most if the water parameters are mainly targeted towards softies (LPS dominated tanks).

They are also calcium hungry.

If you have a tank high on Calcium the hammerhead will be of great aid in reducing the excess levels.

Here are some parameters for a happy hammerhead coral:

Though they are feeding chiefly through photosynthesis you can still spot feed them.

I have managed to keep mine happy with a variety of foods for LPS corals (a link to Aquanswers’ guide on that).

From what I’ve seen with my hammer coral growth rate can be improved significantly (up to 2 times) if they are being manually fed. 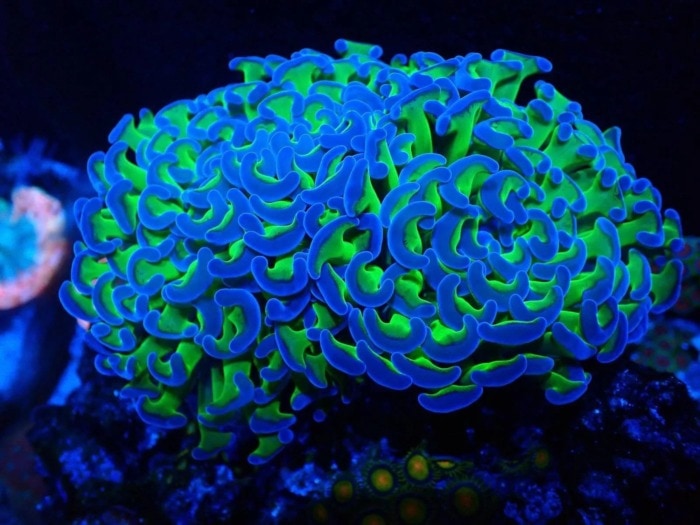 Give them Mysis, brine, or krill shrimp if you don’t want to get a specific brand of coral food.

However, they will also have an appetite for Coral Frenzy or Reef Chili, and even oyster eggs.

Visit the link to my guide on these and other quality choices and give it a skim.

If you’re like me you’ll get addicted to the whole Euphyllia thing rather quickly.

The hammerhead coral is fascinating in its nature, even though aggressive.

After you nail the spot of your first one your judgment about where to place them will improve.

Let me know how that went in the comments below.