You’ve been enjoying the magnificence of your Glofish for some time, but now you’ve decided to add some diversity to the picture.

However, not all beauties of the water world want to be part of that. For example, can Glofish live with goldfish without tearing each other apart?

Are there general rules to follow when coming up with a companion?

There are 4 main types of Glofish – black skirt tetra, zebra danio, tiger barb and the rainbow shark. The Glo Betta was added to the list in 2020.

These are the species genetically modified with “fluorescent genes”.

The modification only concerns the color of the fish.

This means that their typical distinctive behavior remains the same as their non-glowing counterparts.

A 2011 study established that transgenic (genetically modified) fluorescent fish are more vulnerable to predators in the wild.

Careful selection of companions in captivity, however, can provide them with a long and happy life. 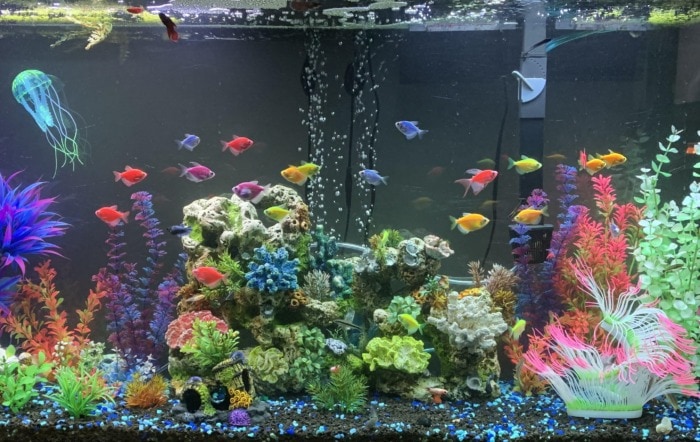 In short, it depends on which kind of Glofish you have or want.

Small tropical schooling fish from communities such as gouramies, guppies, rasboras, dwarf cichlids and others are a reasonable fit in general.

Bear in mind that peaceful bottom-dwellers such as loaches and plecos should not be put along a Glo shark.

On the whole, Glo Danios will enjoy the company of other fast swimming community fish and so will Glo tetras.

Just be sure the water temperature requirements of each species match.

Glo sharks are a little more aggressive in their nature so they should be kept along with other tough or fast fish.

Below you can see my 4 hour-long effort to craft a detailed chart where you can check compatible mates on the go.

You can bookmark this page in your browser if you think you’d want to look at it again later.

Take a look at the full Glofish compatibility chart here:

Did you find what you were looking for? Good.

But I will not stop here as I know we fish keepers would like our fish to be happy.

At least, I know I want mine to be.

Though compatible, some tank mate choices could be better than others.

Therefore I find it necessary to share with you what I’ve found are the best companions for every single type of Glofish. 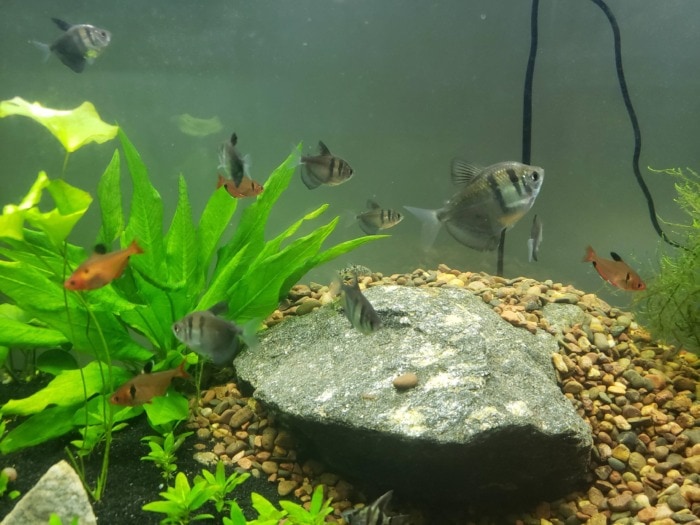 Black Skirt tetras (or Widow Tetras) are schooling fish that are comfortable living with others of their kind.

If you’re aiming at Glofish tetras you should acquire at least 5 of them.

Whenever the school is not large enough this species can become aggressive.

Lonely Glo-tetras are known to nip the fins of long-finned fish like bettas or angelfish.

This is, however, easily avoidable if you keep them in a school large enough.

Provided they are in a group of no less than 5, Glofish tetras would love to hang out with: 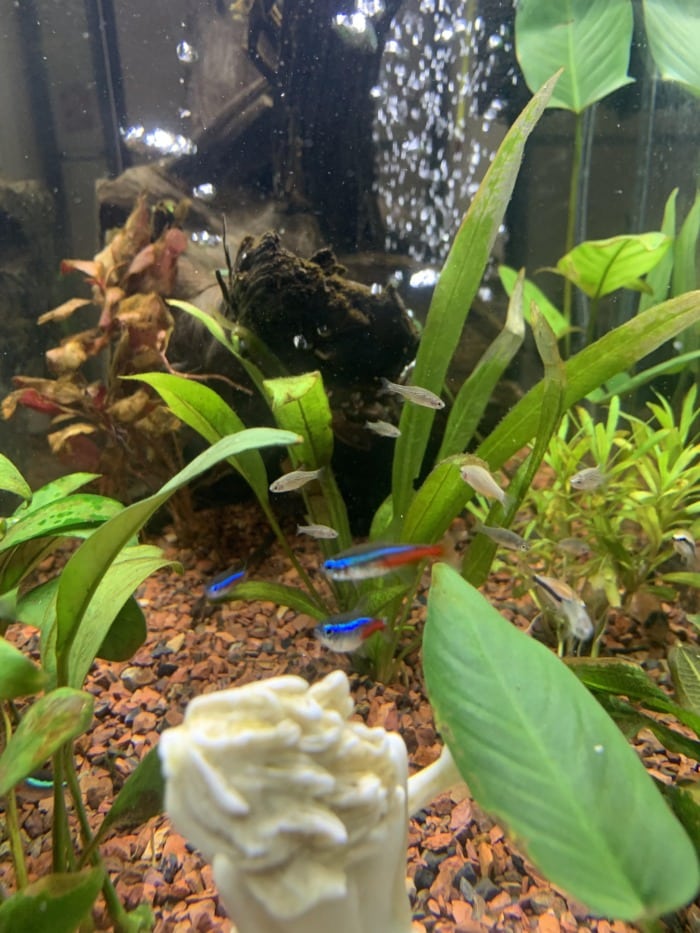 Glofish danios are quite the active swimmers.

They will restlessly dash through the aquarium.

They are also schooling fish, which means that they don’t like to be alone. Keep them in groups of at least 6, to suppress their semi-aggressive personalities.

Here’s a list of Glofish danio tank mates that will ensure a happy aquarium: 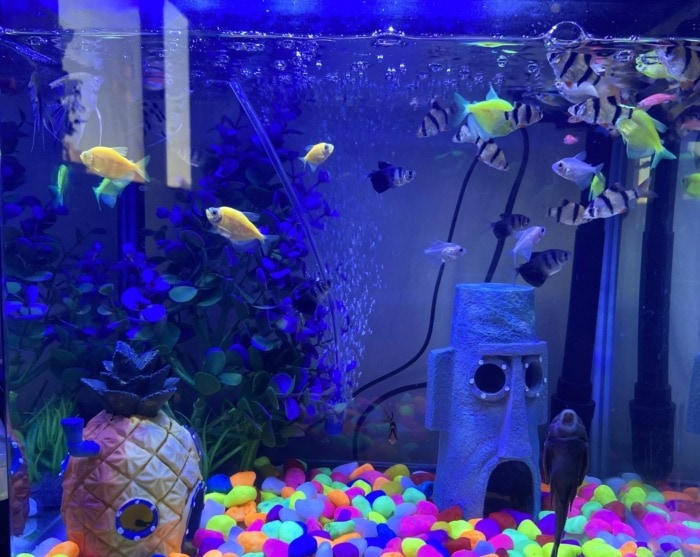 The Glofish tiger barb is a well-known fin nipper.

Aggressiveness can be significantly reduced if you keep them in a school though.

From what I’ve seen a group of 7 is enough for them to only pay attention to themselves.

The temperament of the Glofish barbs varies so if you’re lucky enough to get the more peaceful ones – a school of 5 may be appropriate.

They should still be kept with caution though.

I am recommending that you house them with slightly larger fish as Glo-barbs will be less likely to attack and chase.

Avoid keeping them with anything long-finned such as bettas, goldfish or long-fin tetras.

Here are some well-fitting tank mates for your Glofish barbs: 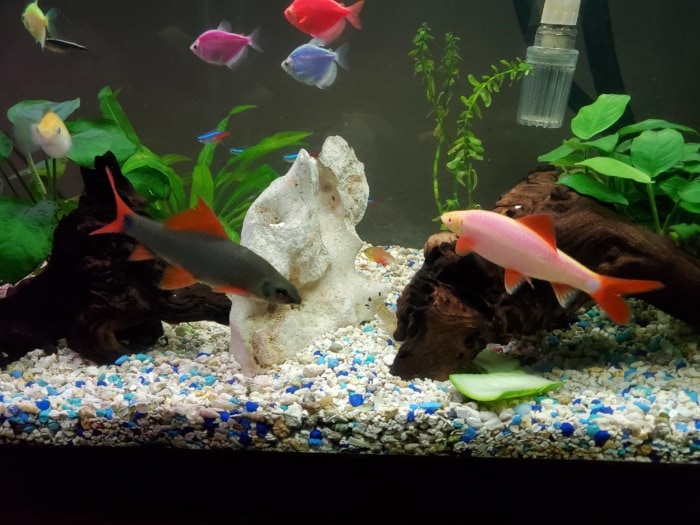 These guys are something else.

Glo-sharks (same as their non-glowing counterparts, the Rainbow sharks) can be really aggressive and are very territorial.

They will “claim” parts of your aquariums such as artificial caves and tunnels.

Avoid housing them with other bottom-dwellers, no matter what you’re being told at the fish store.

Plecos and loaches, for example, may be large enough to not get eaten but they will become stressed from the chasing.

On the other hand, these small sharks will get along with schooling fish that prefer roaming the middle to top aquarium space.

Putting other members from the aquarium shark “crew” with a Glo-shark is, again, not at all recommended.

That is unless you can provide them with a huge heavily planted tank (aquariums over 100 gallons).

Have a look at a list with suitable Glofish shark tank mates below: 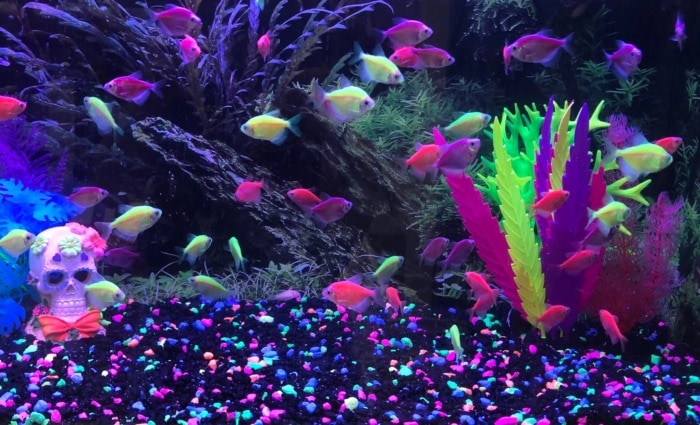 As you can tell 3 of the 4 types of Glofish are schooling fish.

If it’s not the shark you’re after, then you should, in all cases get at least 5 of the same species.

Schooling fish will become aggressive and depressed if they’re forced to live a solitary life.

Don’t overstock your aquariums and provide your Glofish with no less than 15 gallons of habitat, but my personal advice is that you buy the biggest tank you can afford.

In case that’s still not a big tank at the moment, I wrote a pretty straight-forward guide on understanding the minimum Glofish tank size (click the link for that).

Keep in mind that danio Glofish are super active and would prefer a long tank.

There is plenty of fish that will compliment your Glofish in a peaceful manner, as long as you go by a couple of very simple rules.

Soon after you get to know them you’ll be able to trust your guts and accurately make general predictions for a good tank mate. Tell me, who did you pick?

61 thoughts on “A Guide (+ Chart) to Choosing Glofish Tank Mates”