It’s no secret that every aquatic species has specific dietary preferences which are essential to its well-being.

In this sense, the primary sources of food for our betta fish should be high in animal fiber and protein.

However, some of the commercially available foods that fit this description should be avoided as they can do more harm than good. Some brands include plant-based proteins in their formulas, which is not useful for carnivorous fish such as the Betta.

For this reason, finding the right ones on your own might prove difficult.

So, I’ve compiled a list of the best foods that you can feed your Betta with.

I will show you how to satiate the hunger of your fighting fish without the extra cost to their well-being.

What Is The Best Food for a Betta Fish?

Feeding fish has never been easier, with pet stores stocking several options for all kinds of aquatic animals.

Just as with most other aquatic pets, Betta fish can be fed with a variety of foods, including regular fish food.

Most people choose to give Betta fish foods that are live, frozen, freeze-dried, or some combination of all three alongside pellets and flakes.

In the wild, siamese fighting fish enjoy a diet of insects and insect larvae such as mosquito larvae, midge larvae, and bloodworms. They also have been known to eat fish fry and small aquatic crustaceans like brine shrimp.

Of course, your pet betta isn’t in the wild, and its diet won’t be quite the same but you should try to replicate it. Here’s what the best betta fish foods are: 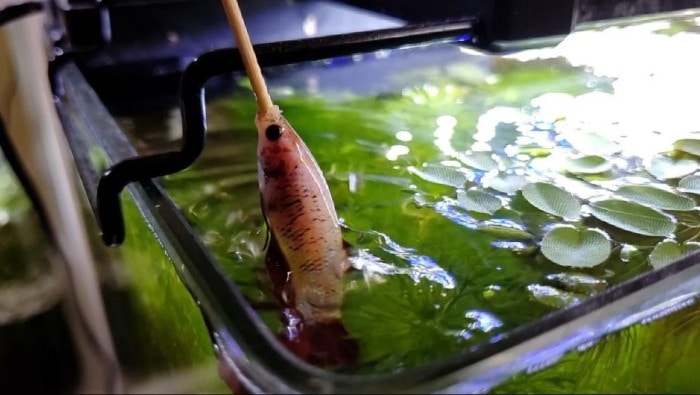 Live foods are some of the healthiest options you can offer your fish, as long as they come from a trusted source.

They force your betta to hunt in the water, which keeps it stimulated. Healthy bettas also tend to look more vibrant than those fed with nothing but pellets and flakes.

If you choose to feed your new betta with high-quality live foods, you have several options that are easy to manage.

The most popular are bloodworms, brine shrimp, mosquito larvae, and wingless fruit flies.

While bettas thrive on live foods, they can sometimes be picky eaters. By replicating what they would eat in the wild, you ensure that all of their nutritional needs get met.

The foods listed below are all part of the natural betta diet:

Most of these live foods can be bought from online retailers and local fish stores alike.

A lot of hobbyists decide to cultivate their own live foods out of convenience.

Brine shrimp, daphnia, and wingless fruit flies are easy to hatch and care for.

Cultivating your own betta fish food lets you regulate what your pet eats, and therefore how nutritious each of its meals is.

I’ve had great experience raising brine shrimp and daphnia for my bettas.

There wasn’t a single time when they refused to join in the hunt!

Author’s note: Don’t give your betta live insects you’ve caught yourself! They may carry parasites and bacteria that can be harmful to your betta’s health.

If live food isn’t to your taste, consider frozen foods.

I like to keep frozen brine shrimp and bloodworms on hand to offer my betta from time to time as a quick treat, and they’re certainly appreciated!

You can find a frozen substitute for just about any live food.

What’s more, frozen foods can be rationed better and last longer than a live colony.

While live foods are often considered to be the best source of nutrition, they do pose some health risks.

Despite the reputation of your supplier, there’s still a slight chance of them carrying parasites or bacteria.

Frozen food on the other hand is typically sanitized before processing and still retains the nutritional value of live food.

As long as you handle it according to the package instructions, frozen food is one of the safest sources of nutrition for your betta.

Needless to say, frozen food should always be defrosted before feeding.

I’ve had the most luck taking a small amount of aquarium water into a bowl and mixing the frozen food into the bowl and letting it sit for a few minutes to thaw.

One reliable vendor where you can get frozen bloodworms online would be LiveAquaria.com (the brand in the link is Hikari). 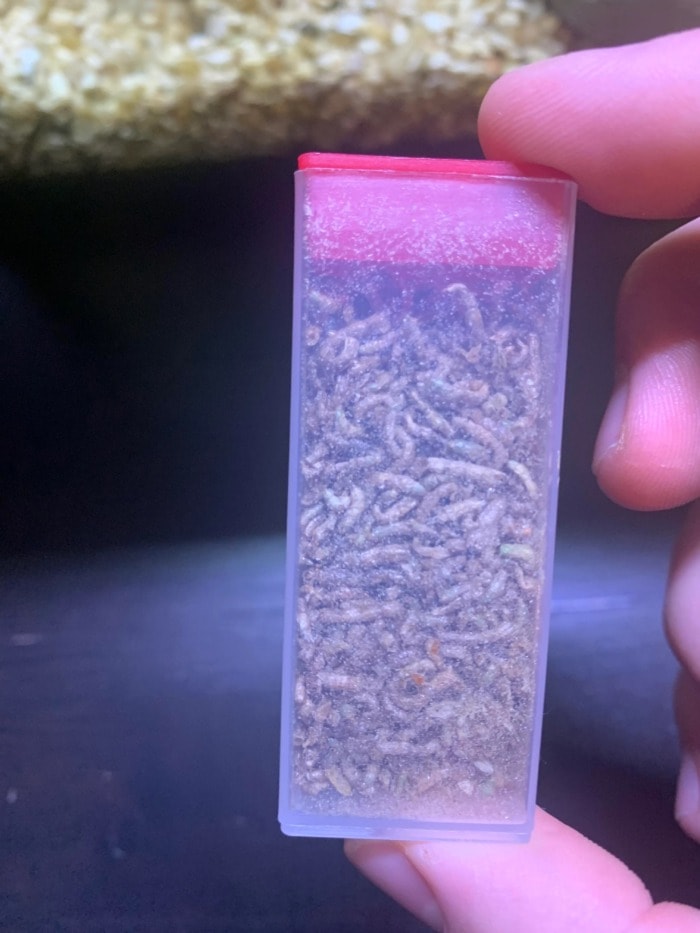 Freeze-dried foods are another common choice for feeding fish.

These are often the same bloodworms, larvae, and brine shrimp but they’ve been dehydrated.

While freeze-dried foods can be part of a balanced diet if used correctly, there are much better alternatives out there.

This is because some of their nutritional value is lost during processing, and they tend to expand after being eaten.

Freeze-dried foods don’t compare to or provide the same nutritional value as live or frozen foods.

They’re combined with fillers to keep them stable and also stripped of moisture.

While they may not be the greatest foods on the market, freeze-dried foods can be safely fed to bettas.

Soak freeze-dried food in tank water for a while before feeding it to your betta so it swells up before your fish eats it.

Anyway, if I had to recommend one brand for a decent freeze-dried Betta snack I would go with Omega One. There are many brands for this, some better than others, but for some reason, all of my fish go insane for the Omega One treats.

You can find these foods in the following stores (but not only):

Another smaller but reliable store you can try for freeze-dried bloodworms would be Brine Shrimp Direct.

What Are Some Alternative Foods You Can Feed to Your Betta?

One of the best things you can do for your pet fish is to provide it with a varied diet that ensures all of its nutritional needs are met.

For some, this means adding tropical fish flakes or pellets to their betta’s diet, while for others it’s supplementing it with human foods.

Tropical fish flakes are one of the most popular fish supplements on the market.

These flakes are sprinkled on the top of an aquarium and float there to be picked off by hungry fish.

Tropical fish flakes can be beneficial to bettas, granted that you pick out the right kind.

As carnivores, bettas require food that has at least a 30% crude protein content.

Select protein-based flakes, preferably those that are designed for bettas in particular.

Bettas have very short digestive tracts compared to other fish, and cannot process common food fillers like wheat or corn. The wrong kind of fish flakes can cause your fish to develop digestive issues, such as constipation and bloating. 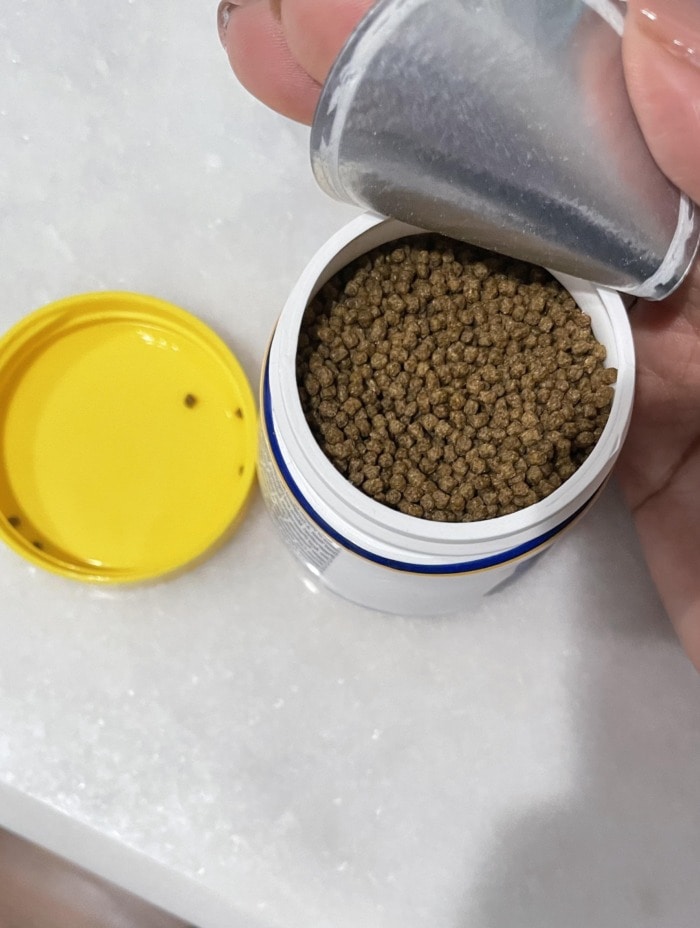 Another convenient food option for bettas is pellets.

These small balls float on the surface and sink as they absorb water.

Pellets are typically higher quality and easier to monitor than feeding flakes.

While pellets aren’t the most nutritious option, it’s okay to occasionally use them as treats for your betta.

Ideally, the pellets you offer should be smaller than your betta’s eyeball. You should limit their amount per feeding to match the volume of the eye of the fish.

The best pellets for bettas are the ones that float and have the most natural ingredients and the lowest amount of plant matter in them.

Some of my favorites include the Omega Sea Betta Buffet Pellets and Aqueon Betta Pellets.

I recommend floating pellets because most bettas will not eat food off the bottom of their tank. While this won’t save you any money, it will decrease the chance of nitrate spikes caused by leftover food.

Bettas can be fed with human foods, but that’s only if it’s tailored to their specific needs.

This, however, doesn’t mean they can survive solely on a diet designed for people.

Their diets should be kept as close to their naturally developed habits as possible to avoid upsetting their delicate digestive systems.

The vast majority of our meat comes from land animals that bettas are not adapted to eat.

Furthermore, these meats contain a lot of additives that are harmful to fish.

Even though Bettas are carnivorous, they can tolerate limited portions of fruits and vegetables.

Fiber-rich peas and other vegetables are commonly used to treat digestive issues.

Any human food you offer to your betta should be minimally processed as possible.

Here are some common human foods Betta fish like to eat:

In a pinch, homemade human food can be used for bettas when you’re out of fish food, but it shouldn’t be a long-term solution.

Author’s Note: Don’t feed your betta grains, acidic foods, or anything that’s been seasoned, salted, or processed. And remember, your fish’s stomach is only the size of its eye. Don’t overdo it!

What About Foods For a Baby Betta Fish?

Are you raising your own baby betta?

The first thing you need to do is learn how to feed it.

As they grow, they can be fed crushed pellets or frozen foods. 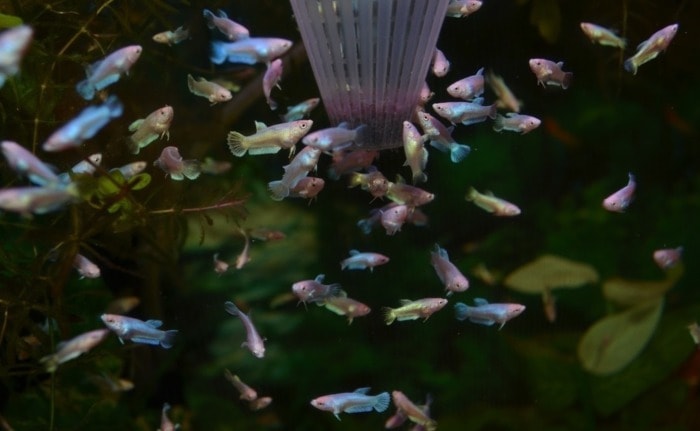 Most foods are too big for newly hatched bettas.

Start small with egg yolk, infusoria, and nematodes like micro worms or banana worms, and work your way up to larger foods as they grow.

Just like many two-year-olds, Baby bettas often turn out to be picky eaters.

I’ve heard horror stories from other betta owners about how their fish turned its nose up at just about everything they offered and would only eat one or two things consistently.

If you’re in the same boat as these poor fellows, then I advise you to switch food brands or even move on to live foods.

This will encourage your toddler fighting fish to find its true nature and unleash its inner hunter. On some occasions, however, this seemingly picky behavior could be a sign that something is wrong.

How Many Times Per Day Should You Feed Your New Pet Fish?

Even though Bettas don’t eat much, finding the exact amount they need might take some tweaking.

Adult specimens should be fed with small amounts of food once per day at the same time each day. Some fishkeepers also opt for a 24-hour fast every other week to reduce constipation.

And that’s okay because most carnivorous fish can skip a meal for more than a week without a problem.

Baby bettas on the other hand can eat as often as five times per day.

The quantity of food your betta should get per feeding will depend on the type of food.

To measure this, simply put a small pinch of your food of choice in the aquarium and observe if it gets eaten in the next three minutes.

If it doesn’t, continue increasing the amount in the following feedings until your betta can no longer eat it under the allotted time.

Don’t forget to scoop up the leftovers with a food scraper.

Bettas are one of the most popular beginner fish for a reason.

Their resilience lets them tolerate a lot of the mistakes inexperienced fishkeepers tend to make.

Nevertheless, the tolerance of these feisty little creatures isn’t limitless. If you want to enjoy their company in the long run, then you should learn how to feed them properly.

Hopefully, this article marks the beginning of a long and fruitful companionship!