Owning a Betta fish means that you’re going to observe all sorts of quirky behavior.

One minute it lazily chills at the bottom of the aquarium, and the other it swims around, aggressively flaring its gills and fins.

What does it mean if a Betta fish displays its gills, and is it okay if they seem to be open as wide as possible?

Is this typical for a male Betta only, or a female will show this behavior too?

Typically, Betta flaring is the result of the fish perceiving a threat to its territory but sometimes it can be more complex than that.

When I got my first Betta, I spent a few weeks, trying to figure out what was wrong with him. I couldn’t help but wonder why my Betta was flaring at me and if that was a bad sign.

Why do Betta Fish Flare Their Gills at Me?

The Siamese Fighting Fish is known as a highly territorial species.

When two male Bettas cross paths, it is not unusual for them to engage in flaring.

With this act, they claim their territory.

That being said, here is why a Betta Fish may be flaring its gills:

The most common reason for Betta fish to flare is an intruder in their territory. By puffing out their gills wide open, Betta fish appear twice their size which may be intimidating to the intruder. Flaring may be the result of other aggressive fish in the tank, a human passing by, or a reflection in the glass.

A closeup of a Betta flaring its gills: 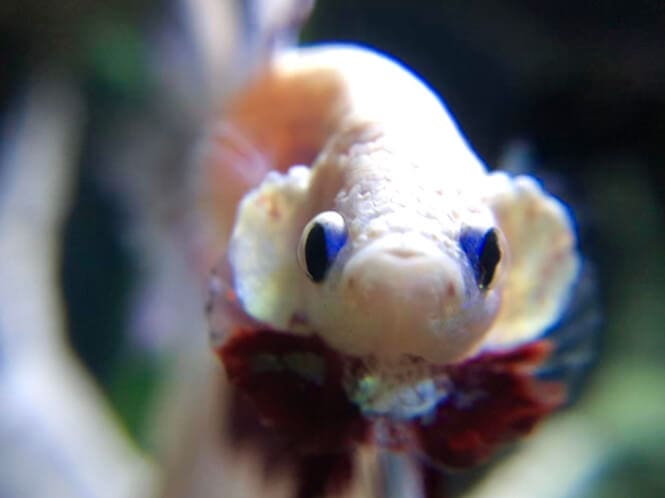 Where Does This Aggressive Flaring Behavior Come From?

There are more than 70 species of betta fish, however, the most common one you can get from pet stores is Betta splendens.

Bred for centuries to be aggressive, that species would not hesitate to display a violent attitude toward anything they consider a trespasser on their territory.

Especially, if the competitor is of the same kind or if they show a similar level of aggression.

Therefore, having two or more male bettas in the same fish tank is not a good idea, unless there’s plenty of space to share.

In the wild, Betta fish would flare for a while and, eventually, one of them would back off.

Fights would also promote a high level of stress for all inhabitants of the aquarium. 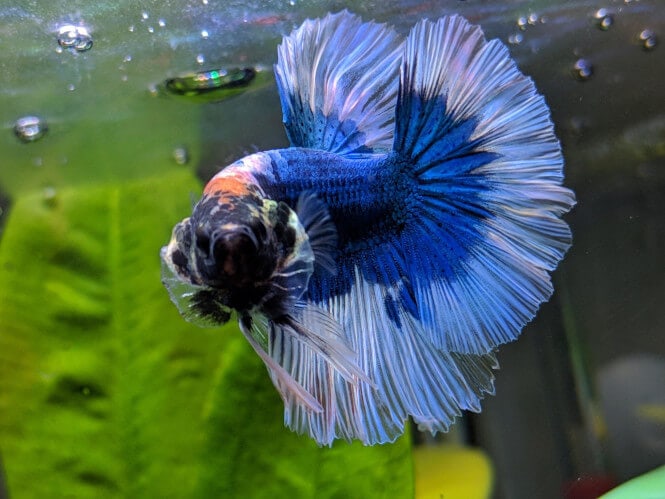 Male bettas might flare at other fish or female bettas as well.

Some bettas even abstain from eating in the presence of an intruder, which could lead to fish health issues.

To avoid aggression, choose your bettas’ roommates carefully. Here you can find detailed information about the most suitable fish species to keep with a Betta.

At the end of the day, we all need some personal space, don’t we?

Sometimes, however, you won’t be able to do anything about your pet’s aggressive attitude. This is because some Bettas will naturally be more aggressive than others.

If you happen to own a little villain who is unwilling to share space, consider putting him into a separate fish tank.

Fun fact: Your small Siamese fighter’s name originates from an ancient warrior clan, called “Bettah”. Around 150 years ago, observing fighting Bettas was quite a popular sport in Thailand. It was even taxed by the King (at that time called the King of Siam). It was not an unusual event for lots of people to bet personal belongings, money, or even their children on a single fight outcome.

Do Bettas Recognize Their Reflection in a Glass? 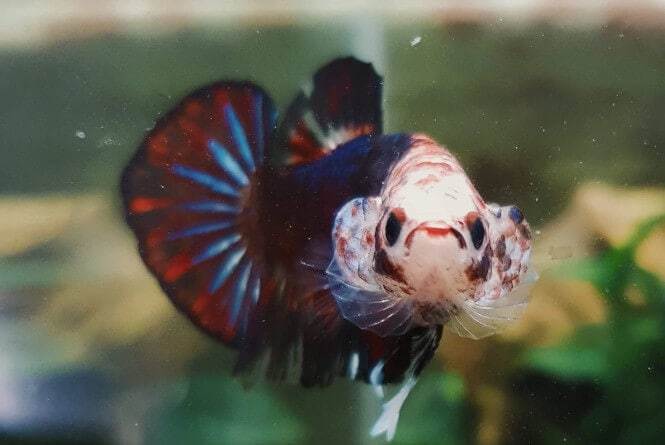 If your betta is alone in the aquarium but still flares its gills or fins, it likely sees its reflection in the glass.

Bettas do not pass the mirror test, hence they often perceive the reflection as another fish and treat it as a rival.

If they flare excessively, that would lead to exhaustion and stress.

In this scenario, you can try to adjust the lighting, change the lights, or relocate the fish tank to decrease stress levels.

You can also add more live plants to filter out the lights, and floating ones are often a preferred choice.

Usually, once they are used to their new surroundings, Betta fish will stop chasing after themselves.

It took more than 2 weeks for my first betta to start ignoring his reflection.

What helped a lot during this period was dimming the aquarium lights.

Sometimes even a tiny fraction of light under the wrong angle will allow bettas to briefly glimpse their reflection, and annoy them for days.

Though you should probably leave the front open, in such cases a wise idea would be to cover the glass walls of the aquarium.

Use whatever material makes sense in your situation and make sure the covers are firmly fixed in place.

Is Flaring Bad for Their Health?

After gaining some insights into the nature of Betta fish, you now know that the act of gill flaring is a normal behavior of theirs.

This is their way to claim possession of a certain area in the fish tank (or the whole of it).

However, if they constantly flare, this shows an underlying problem.

Here’s whether flaring is bad for a Betta:

The flaring itself is not bad for the health of Betta fish, because it plays the role of an exercise for their muscles.

On the other hand, too much of it is a firm indication that a Betta is under stress.

If no measures are taken to reduce the stress, this would lead to a weakened immune system in the fish.

Following these thoughts, Betta fish that flare too much may be more susceptible to bacterial infections, disease, and parasites. 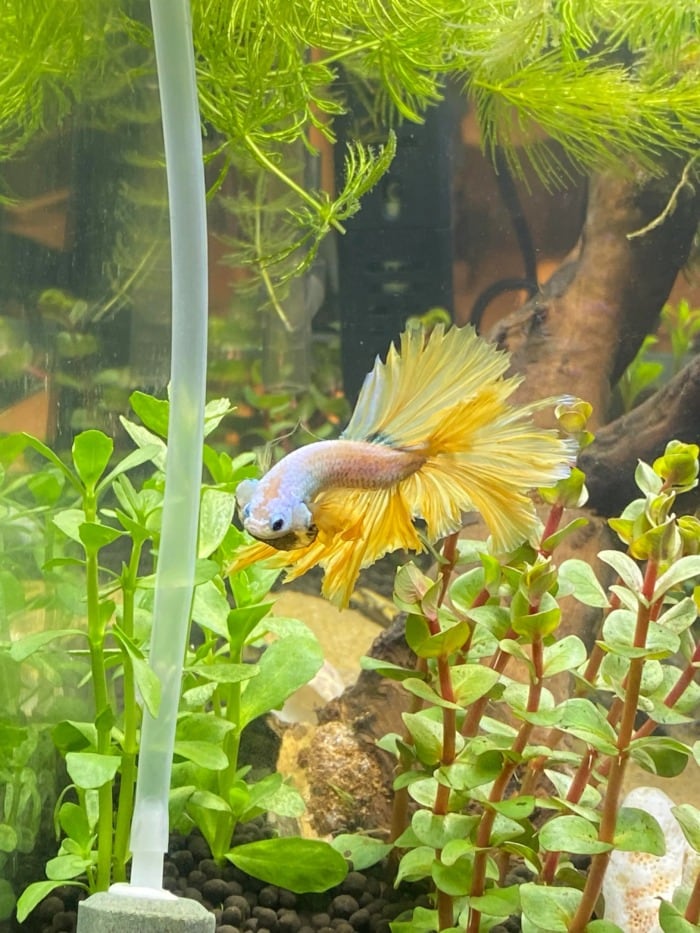 Constant stress in aquarium fish may promote pale coloration, lack of appetite, and lethargic lying on the bottom of the fish tank.

Those usually are the first signs of a sick Betta fish.

In such cases, you need to take immediate action in eliminating the stress factor or seek medical advice from the vet.

Make sure you have checked all the stress factors, such as unsuitable tank mates, intense lights, and reflection.

On the other hand, occasional flaring is normal for Betta fish, as it keeps them in good shape.

You can even stimulate them to flare for around 2 to 3 minutes per day.

Place a small mirror in front of them and enjoy the colorful sight.

Will a Female Betta do it? 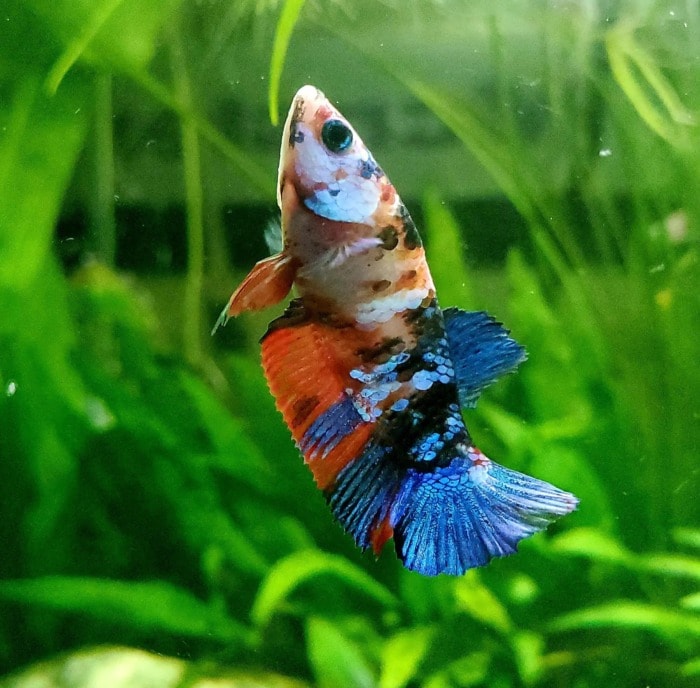 There seems to be a discussion online on whether a female betta will flare its gills.

I have heard a lot of people claiming females do not flare. Others say they are even more aggressive than the males.

Whether a female Betta will flare or not is a matter of temper:

Female bettas can also flare at one another.

The main difference between them and male bettas is that females are rarely as aggressive.

Therefore, they can successfully coexist with semi-aggressive fish species and even other female betta fish.

The general agreement in the hobby is that you can have up to 6 female bettas living peacefully in a sorority fish tank.

Depending on their personality traits, some female bettas might not even flare when they see their reflection.

However, regardless of gender, this is still a Siamese fighter fish.

As such, a female could be easily triggered if not having enough personal space.

Same as before, if you think of having a couple of female bettas in one tank – do not forget to create different hiding spots by placing enough decorations and plants around. 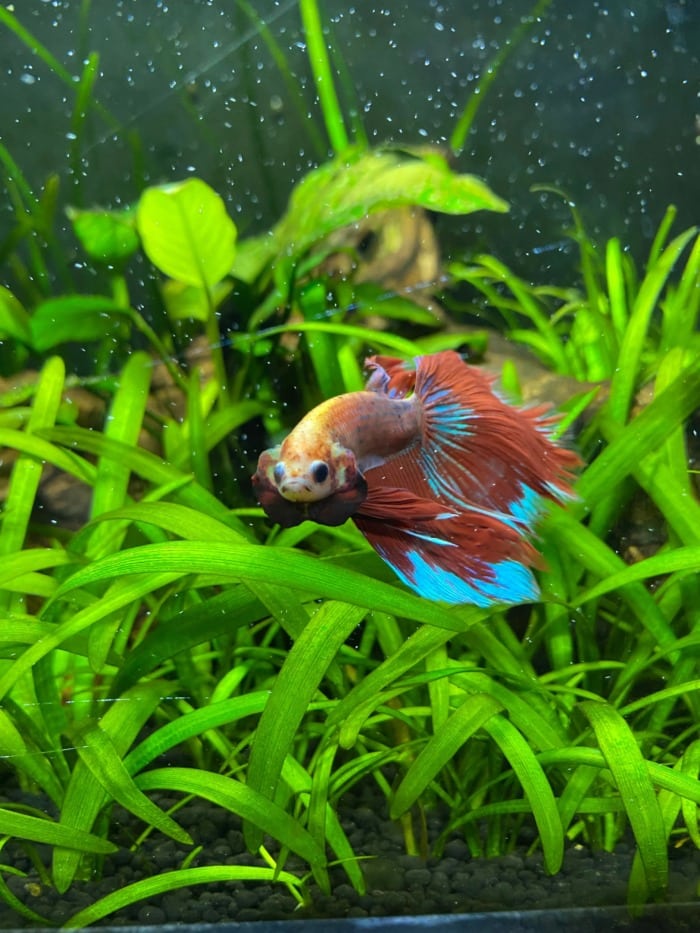 Another reason for Bettas to flare is the beginning of a breeding period.

When you first introduce a female to a male, the male will flare to impress the female and to establish dominance.

Often the female betta will flare back in response.

That vivid show might continue up to a few days before the female is ready to spawn.

In some cases, Bettas also flare due to excitement.

I have a friend whose male betta performs a small happy dance every morning when he sees his food.

He moves around without aggressively extending his fins.

I always remind my friend how lucky he is, as I have never experienced such an exciting sight with my small villains.

Flaring in betta fish is an act of intimidation, and its purpose is to chase away any territory intruders.

It is good for bettas to occasionally do it, as that keeps them in good shape.

Make sure you know your fish’s personality well and take prompt action to avoid stressful situations.

2 thoughts on “Why Do Betta Fish Flare Their Gills? (Is it a Bad or a Good Sign?)”