Noticing odd behaviors in your pet fish is always disturbing.

It’s never easy to tell if your fish is dying or if the signs it’s exhibiting are due to something else entirely.

Sometimes a fish may act in the same way it would if it was sick.

Lack of appetite, for instance, is one of the most common symptoms of a dying fish. However, this doesn’t necessarily mean a fish is about to perish. A fish may refuse to eat just because it was overfed. For this reason, I’ve written a guide that will spare you unnecessary confusion.

Here’s how to know if your fish is dying for sure.

How to tell if your pet fish is dying?

Fish with impaired health can exhibit a myriad of symptoms.

Some can be seen by the naked eye, while others aren’t so easy to spot.

As with any other pet, when fish are about to pass away, they start to behave in unusual ways.

A sick fish, for instance, may become sluggish and spend more time at the bottom of the aquarium.

That’s why the easiest way to tell if a fish is sick or indeed, dying, is to monitor its behavior:

When a fish is about to die it may lack appetite and become increasingly lethargic. These symptoms are usually a sign of an advanced stage of sickness. Treating the illness as soon as possible could increase the survival chances of your fish.

Behavioral changes, however, aren’t the only indicators of poor health in pet fish.

What are the most common signs of a sick fish?

Pay attention to the following if you’re concerned about your pet:

Fading body colors are one of the tell-tell signs of a stressed fish. Typically, when a fish feels stressed it stops eating.

Because fish are unable to produce pigments of certain types, their skin color is in great part determined by the food they eat. Consequently, when a fish stops eating, it loses the pigments which give off its vibrant colors.

Anyway, check if there are any other health issues present.

If the discoloration is combined with lethargic behavior, for instance, your fish is most probably ill.

Author’s note: Sometimes, however, a fish might start to lose its colors due to genetic factors. Some Betta fish who carry the Jumping Marble gene, for example, can change their color patterns multiple times during their lifetime. 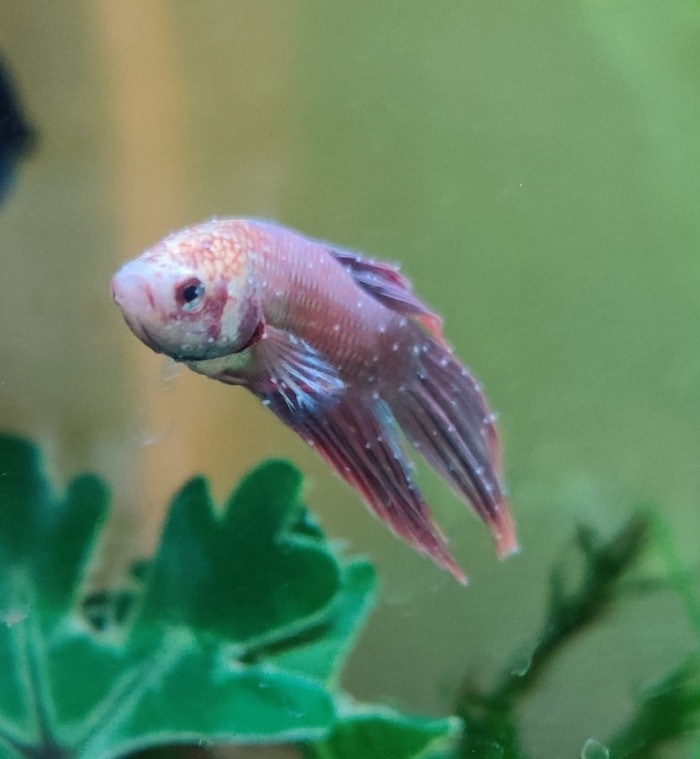 The most common reason why a fish’s body becomes covered in white spots is an external parasite called Ichthyophthirius multifiliis or Ich. Ich greatly damages the gills and skin of a fish, by directly penetrating its skin.

This disrupts the osmoregulation of the fish which leads to a host of other health issues.

If left untreated, Ich could kill a fish in less than 4 days. White blotches, however, could also be a result of a milder bacterial infection.

Whatever the reason, you shouldn’t leave your pet to suffer any more than it needs to.
Consult your vet for the appropriate treatment in case you notice any unusual white spots on the body of your fish. 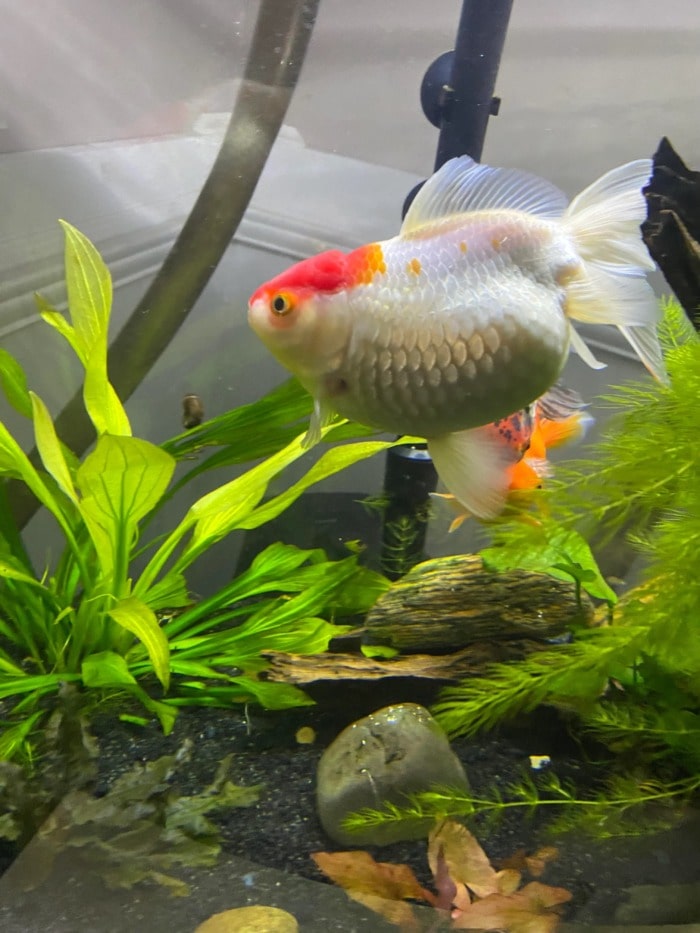 Bloating or Dropsy, as it’s most commonly referred to, is caused by the accumulation of fluids in a fish’s body.

Liver dysfunction, and parasitic or bacterial infections, are among the chief suspects for this condition. Fish experiencing Dropsy, usually have an unnaturally bloated abdomen which gives them a pine cone look.

Some other typical signs of bloating include protruding scales, bulging eyes, and pale gills.

Dropsy is treated differently, depending on the underlying issue at play.

Some of the most commonly used treatments include water changes, salt, and antibiotics.

Is your fish constantly at the top of your water column?

Is it having trouble breathing?

Then it may be in desperate need of some oxygen.

Hyperventilating fish swim to the surface of an aquarium when there isn’t enough oxygen in the water.

If the water in your tank contains high amounts of ammonia or nitrite, the pollution can damage the gills of your fish. Gills play a major role in oxygen intake for fish.

This could lead to seemingly gasping helplessly near the water surface.

In those cases, it’s not a bad idea to pull out that liquid test kit you have at hand if you notice your pet is struggling for air.

Measure the aquarium’s water parameters and see if something went wrong with its Nitrogen Cycle.

A “cycled” aquarium should show the following water test results at all times:

Another factor you should always consider if your fish is having difficulties breathing is stress.

Fish are fickle creatures and even small changes in their environment could stress them out.

Sometimes, all your fish needs to become stressed is a new tank mate, but I’ll get more into that in the following sections. 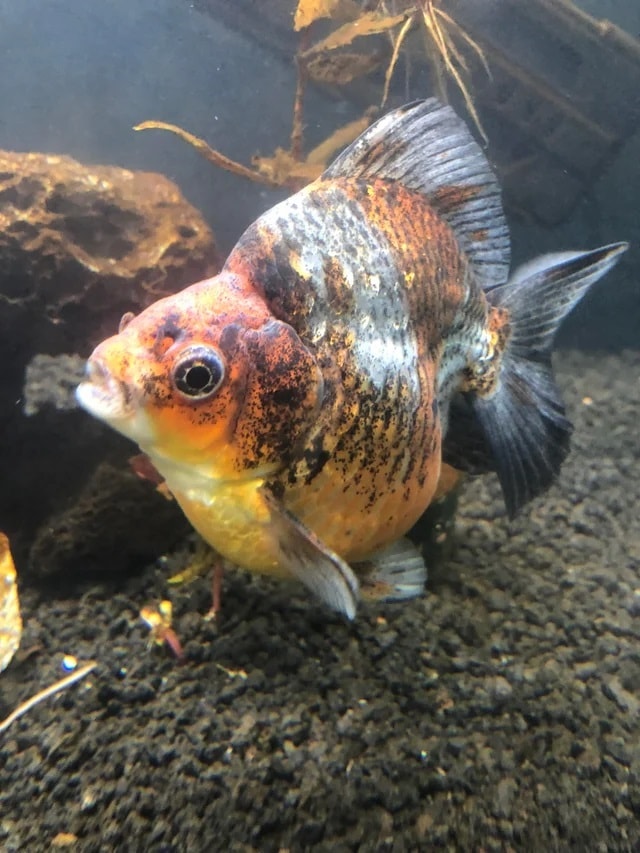 Decreased appetite should be taken as an indicator of poor health if a fish hasn’t eaten for at least a few days. A hungry fish is usually a healthy one.

If your pet suddenly stopped eating, then it’s highly probable there’s something amiss with its environment.

The pH levels of your water might be askew or there could be too much waste in the form of ammonia or nitrite.

In some cases, the lack of hunger could even be due to parasitic infections such as Ich.

Author’s note: A healthy fish can go up to a week or more without food with no issues.

However, if your fish is deliberately denying food then there’s an issue. 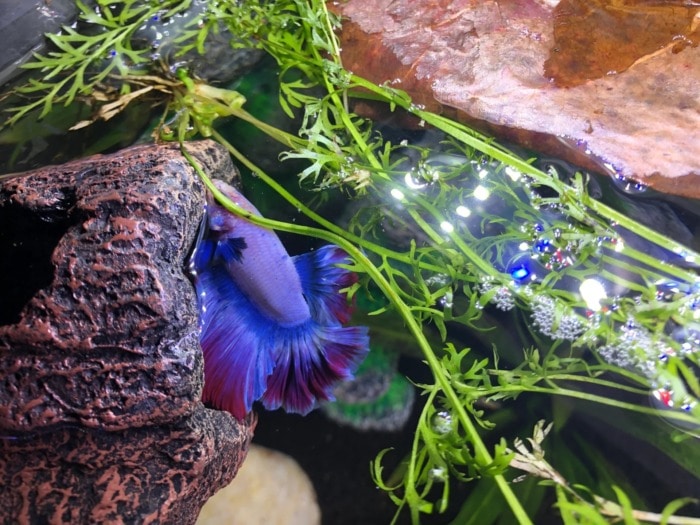 Unless it’s sleeping, your fish shouldn’t be idly sitting around at the bottom of your tank for hours on end. This only applies to species that are not bottom dwellers by nature.

Anyhow, healthy fish like to explore their environment and rarely spend much time at the bottom.

If a fish spends more than a few hours at the bottom, it most probably means it’s sick.

Apart from being ill, fish may become lethargic due to temperature fluctuations.

Unlike people, a fish’s body temperature will match that of the water surrounding it. This directly influences its metabolic rate and behavior.

A fish living under its optimal temperature range will have a slower metabolism resulting in sluggish movements. 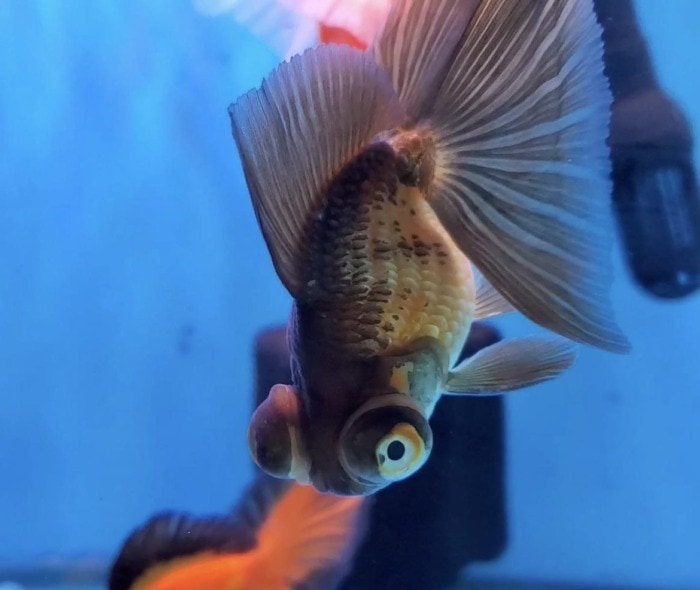 This one is also easy to spot. A fish with buoyancy control issues will swim upside down or sideways.

This might seem like a scene from the movie Inception, at first, but you shouldn’t take it lightly.

Left unchecked, buoyancy control issues could elevate the stress levels of your fish and eventually kill it.

The reason behind such odd behaviors is usually swim bladder disease.

The swim bladder is a gas-filled organ that helps fish float.

When affected, the fish’s ability to float gets impaired.

Swim bladder disease could have many potential causes.

Overeating, constipation, parasites, or bacterial infections being the most common ones.

What causes sickness or death in fish?

In the vast majority of cases, a fish becomes sick because of stress.

A stress-free fish has a robust immune system that can fend off almost any illness and infection. That’s why keeping an environment free of stress is of utmost importance for the health of any fish.

If you want to maintain a trouble-free aquarium, pay attention to the following stress-inducing factors:

You can save this checklist for future reference.

Is my pet fish suffering?

It’s easier to tell if our land-based pets are suffering because we can hear their cries for help.

Aquatic pets, on the other hand, have no way of reaching out to us.

So how can we tell if we are actually causing suffering by prolonging their lives needlessly?

If you have observed any of the mentioned signs in your pet, then it’s most probably unhappy and in pain.

The first course of action of any responsible pet owner should be to diagnose the condition to the best of their ability and treat it if possible.

In any case, only a veterinarian can properly diagnose your pet fish. Unfortunately, if your fish is dying of old age, there’s just nothing you could do to save it.

In such dire times, it comes down to watching your pet die a slow miserable death, or terminating its suffering in the most humane way possible.

Each pet owner deals with the death of their fish differently.

Some might choose to end the suffering of their pets without hesitation, while others prefer to let nature run its course.

That’s why this is a personal choice that you as the pet owner have to make.

Don’t feel discouraged if your fish is dying!

There likely is still hope, assuming that you manage to act quickly enough.

And in case nothing works, you could unload your burden by sharing your story down in the comments.

I have found that sharing always helps alleviate the pain of losing a beloved pet.

2 thoughts on “How do you know if your fish is dying? (Signs to look for)”