Revised: 05/2021.
That black sandblasting sand will look amazing under your aquatic plants, right? But is Black Diamond blasting sand planted tank-safe? What about your fish? The media’s used for polishing, after all, wouldn’t it be too sharp? Can it hurt your bottom-dwellers?

So is using Black Diamond blasting sand in a fish tank safe?

Though the BD abrasive media’s main purpose is to be used in the process of sandblasting it will not be harmful to your fish. Here’s why using Black Diamond blasting sand in an aquarium is safe:

This blasting media is completely inert and won’t release any harmful substances in an aquarium. In general, it is as sharp as any other sand, as hardness is important in sandblasting and not having sharp edges. It will not hurt your bottom-dwelling fish. In conclusion, the Black Diamond blasting sand is completely safe for fish tank use.

With that out of the way, we can answer the important questions.

Advantages of using black blasting sand in your aquascape? 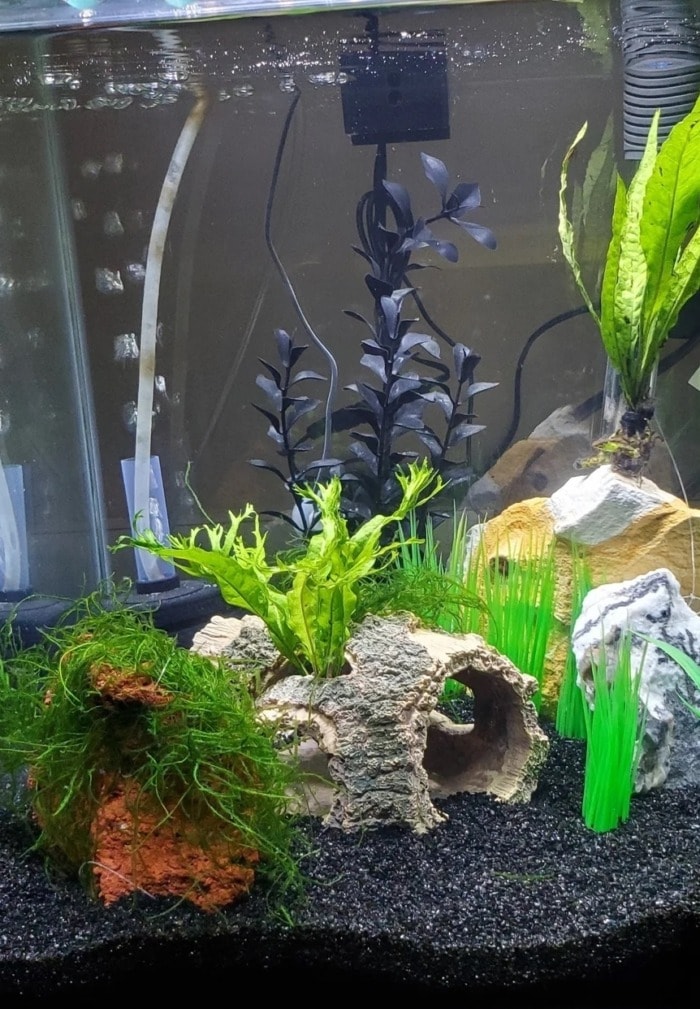 Here are some pros to using the black sandblasting media as aquarium sand, that I’ve found to stand out:

It’s really cheap. A bag that costs around $10 will supply you with around 50lbs of black aquarium sand. It can be a great solution for larger fish tanks on a budget.

From here on you can do the calculations on your own.

But the cost is not everything, right?

What I like about this product is its magnificent looks, plain and simple.

It’s not jet black, but it is as black as any aquarium-grade black sand would be.

Upon closer inspection, you may find that it has an amber-ish hue.

Not at all a problem, only your bottom-dwellers will notice that anyway. Speaking of which…

Exactly how safe is it for fish? 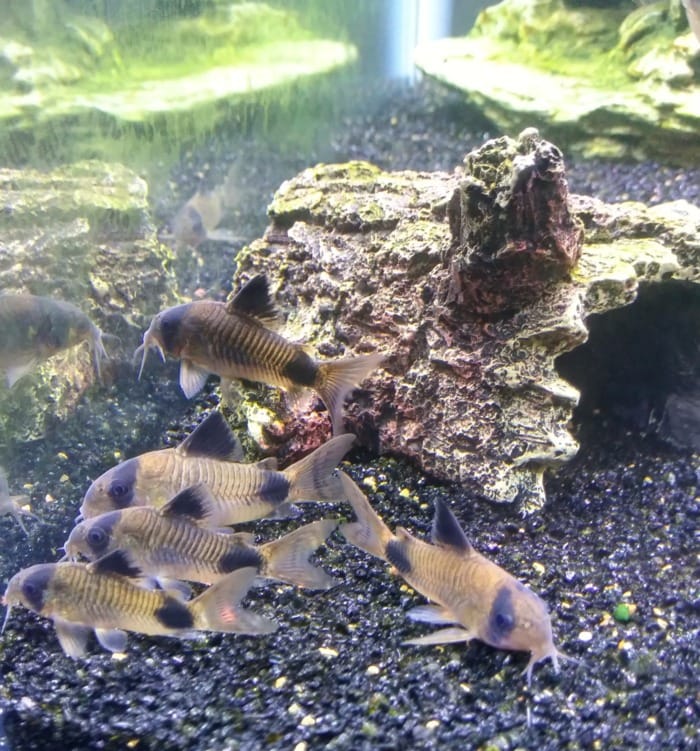 The Black Diamond blasting sand is absolutely safe for bottom-dwellers. Even the ones with sensitive bellies, such as corydoras. Here’s how I found that out:

I admit that I was concerned before getting a rubber-lipped pleco to test it with.

Some people from the on and offline community were saying the blasting sand was too sharp.

“It will hurt your bottom feeders” they said. “Long-finned fish are in danger around it” they said.

Well, I did a lot more research only to find out that first-hand users would never encounter these problems.

After repeatedly using it myself, I can only assume the well-meaning but misleading warnings came from people who never tried the stuff.

How come Black Diamond Blasting Sand is not sharp though?

The myth that sharp sand is needed for effective sandblasting persisted until the beginning of the 20th century.

Keep in mind that, sharp blasting media can only be obtained through crushing crystals.

At the beginning of the 1900s, experiments have been done to show that blasting media with sharp edges would quickly turn into crystalline dust with no abrasive power.

In fact, sand that contains more than 1% of sharp-edged materials such as silica is forbidden to use in sandblasting, because the crystalline dust may cause Silicosis (a deadly lung disease).

You can read more about why sharpness is not what makes blasting sand effective in Popular Science’s issue from February 1919, Little Grains of Sand.

Anyway, I have been relying on Black Diamond sand for nearly eleven years.

My plecos are happy and healthy.

They have been living on that substrate ever since they were little.

All in good shape and to no ill effect.

Also, I’ve personally seen black diamond blasting sand work in aquariums with corydoras that have grown on that substrate.

I’ve not kept corydoras fish in a system with BDBS but having seen it work in other people’s mature tanks and having read multiple reports of Cory keepers I can conclude that it’s safe for fish with tender bellies.

My research showed that Black Diamond Sand can even be used in aquariums with fish that like to burrow themselves in the substrate, such as freshwater eels.

For the sake of transparency: There are some reports of the sandblasting substrate slightly altering the pH in the aquarium.

However, in my experience, this is likely due to human error or other factors that were not related to BDBS, because I – and the large majority of other users – have never experienced changes in PH after using this substrate in an aquarium.

Can it be used in a saltwater tank?

The Black Diamond blasting abrasive is absolutely safe for use in a marine fish tank. It is completely inert which makes it harmless to otherwise sensitive marine life.

I have not run a saltwater tank with it, but I know real-life people from my community who have.

I know how expensive maintaining a reef tank can be. I was planning on starting one and really wanted it to have a beautiful black substrate.

Back then I already was using the sand for a couple of my freshwater aquariums.

Fortunately, a friend of mine turned out to be brave enough to test it in his small reef tank.

To this day he has been using it in more than one of his marine tanks.

He praises it as his favorite substrate. Corals and fish alike seem to agree. 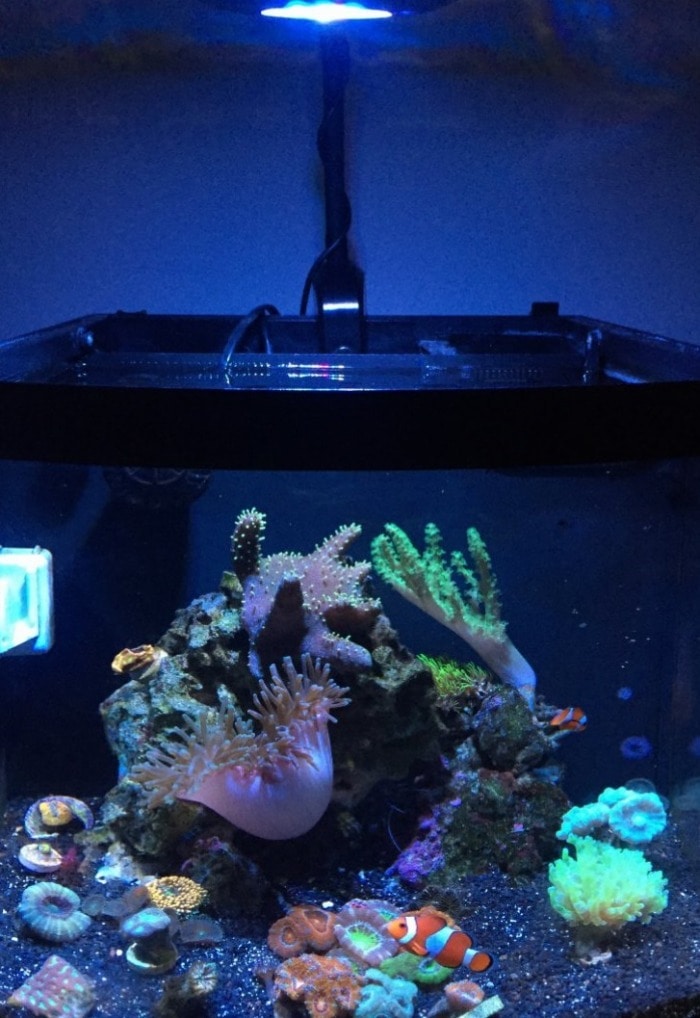 The black sand turned out to have a nice unobtrusive glitter under the blue-ish lighting too.

Though I ended up going with another substrate for my reef tank (unexpected financial boost), I wouldn’t hesitate to use it for a new reef setup today.

How to prepare blasting sand before using it in the aquarium?

Generally, this type of sand needs a bit of rinsing, but it’s not entirely necessary.

It will release some oil upon washing.

The oil, however, will not be harmful to your plants or fish.

Rinse it with hot water, which will help the oil to come out faster.

I prefer to rinse it in my bathroom, as it creates less mess.

I use some sort of non-powdered latex gloves as protective gear while stirring it.

The reason I do so is that It may get under your fingernails. This is not a major inconvenience, but it’s not pleasant as well, especially with a finer grit.

If you do choose the bathroom approach – clean the residue from your bathtub after.

Do not use soap in the rising as I have seen some fishkeepers advise online.

Presumably, it will take care of the extra oily stuff that comes off the sand.

Not needed. Soap is toxic to fish.

I have never had issues when simply rinsing it with hot water.

Even if some oil gets left behind it will accumulate on the water surface.

From there, you can remove it with a rag.

It will stop leaking in no more than a couple of water changes if this is the case. Nothing to worry about, in my experience.

You can even use it without rinsing, the oil slicks won’t hurt anyone.

In fact, the last time I went with it, I poured the sand media directly into my new tank.

Filled with water and waited for the oil to find its way up the water surface. Removed it with a cheesecloth (I think) and did not have any issues after.

Extra conspiracy-busting tip: The bag will say not to allow the BD black sand to get wet, but that should not scare you.

It is meant to be used as a blasting media.

To properly function as such it should remain dry, as there are other media that are used in wet abrasive blasting.

BDBS is completely inert when wet, however.

What grit of blasting abrasive to use in your aquarium setup?

In general, I’d recommend going for the medium to coarse Black Diamond blasting grit of 20/40. 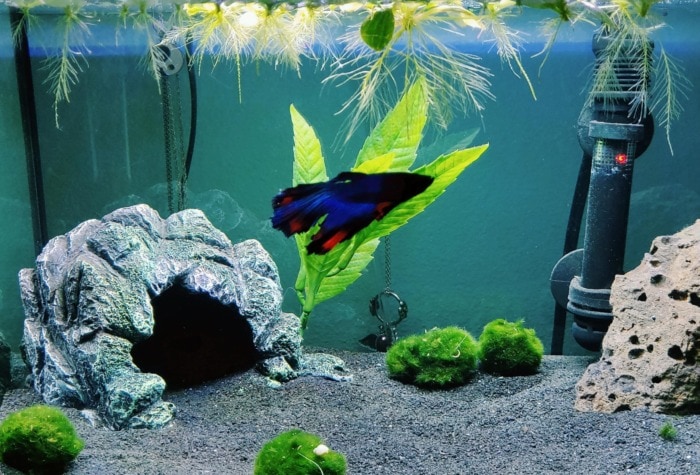 If you want to have bigger fish in your black sand aquarium, they may cause the finer grit to cloud your water.

This sand is heavier than a regular one so it will dissipate faster when disturbed.

If you plan on using it in reef tanks where a bottom current is often needed – use the medium grade one.

If you do go for the finer 30/60 grit in a freshwater setup, you will have a really easy time planting plants. It will hold them down wonderfully.

Author’s note: Too fine of a grit may become a little difficult to vacuum.

How suitable is BD’s blasting sand for a planted tank?

This sand has the ability to hold down your plants stably, even compared to other substrates designed for plant growth.

I guess it’s not surprising that I listed it at #3 when discussing the best aquarium substrates for tanks with live plants in them. Click the link to read my full disclosure on the matter with the pros and cons listed.

Anyway, this aquarium-friendly sand is dense, but not prone to compacting, which makes planting in it is a breeze.

You’d need to provide food for the plants’ root systems, however.

Feeding the roots with root tabs has been a success for me.

Any grade of food tablets would do. I use these (link to check them out on Amazon).

For all of you who already think that this can be too much work – I beg to differ.

A single tab will last you months. Place one for every diameter of 10 inches and check on them in 3 months.

For heavily planted tanks, you can still use quality soil substrate and top it off with the blasting abrasive.

Both are advertised as blasting sand abrasives, but is there any difference?

The Black Beauty sand is supposedly the same as the Black Diamond.

You can use both in an aquarium to the same effect. 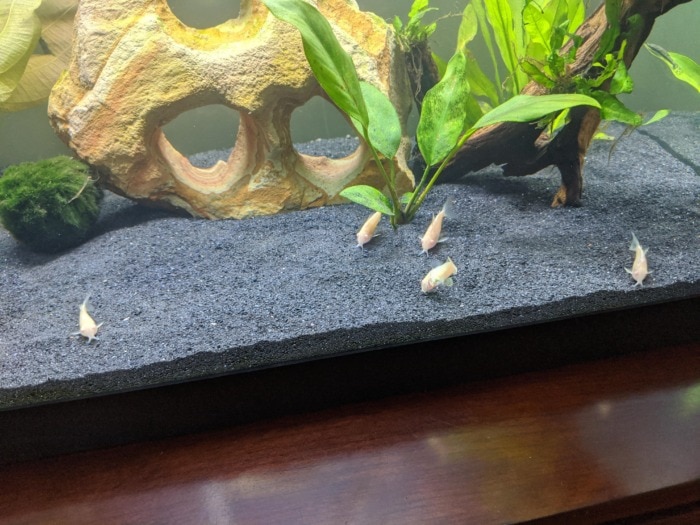 Though they may not have completely identical compositions, they are suitable for aquarium use.

I have not used Black Beauty in my tanks, but there are enough reports of people who had success with it.

The reason fishkeepers may need to use one over the other is often location and availability.

Where to get Black blasting sand?

You can get the Black Diamond sand in any of the “Tractor Supply Co” stores near you.

However, not everyone has one of those in close proximity.

Locate where your nearest store is and calculate how far you’d have to drive to get there.

If you’re okay with the road trip and spending a little money on gas then go for it.

Sometimes we don’t have the time or the chance to take a road trip though.

In this case, you can order it online (Amazon has it) but it will cost you around $50 for a 50lbs bag.

Unfortunately, this is 5 times the price of the Tractor Supply’s offered bags.

Still, if you have no other option, but want to go for that stunning black look, I think it may be worth the purchase.

A black sand substrate “made for aquariums” such as Tahitian Moon will still cost you around $70 per bag (be it online or on-site).

Another option is to check if you have a nearby supplier of Black Beauty.

You may also be able to find the black sandblasting media at Lowes or Home Depot where it will still be reasonably overpriced.

The Black Diamond sand is a livestock-safe aquarium substrate.

It is absurdly cheap while giving unique aesthetics to your fish tank.

You won’t go back to normal substrates after using it. Do leave a comment below if you feel you need more answers!