Lately, you’ve been dreaming of having your own suckermouth pleco, but don’t really want to look after a 2 feet long monster.

The rubber lipped pleco’s size should come in handy.

To have someone furiously cleaning the tank for you is a luxury, right?

But will the rubber lip plecostomus really snack on algae?

Does this pleco species require extensive care? Are they as aggressive as their larger cousins?

In this Aquanswers guide, you’ll learn everything you need to know about the Rubber Lipped Pleco…

The Rubber lip pleco is a bottom-dwelling, freshwater fish that belong to the Chaetostoma genus.

Chaetostoma is part of the largest family of catfish – the suckermouth armored catfishes.

These fish have specially enlarged gills speculated to serve the purpose of breathing while being attached or feeding.

They are also avid algae consumers (under certain conditions).

A common misconception about the Rubber Lip Plecos

Fish stores often confuse the RL with the Rubber pleco (Parancistrus aurantiacus) and falsely advertise them as one another.

The most distinctive differences between the two, in layman’s terms, are the maximum growth size and the coloration.

Rubber Lipped plecos have spots on their head where the Rubber pleco (also known as Chubby pleco) has somewhat crossed stripes.

A true RL pleco will reach no more than 4.5 inches in body length and will not experience a dramatic change of color. On the opposite side, the rubber plecos reach up to 7 inches, later shifting from grey to gold-ish coloration.

I’ve chosen two photos with a pronounced distinctive coloration so that you could compare them.

Here’s how a rubber lipped pleco (Chaetostoma formosae) looks like: 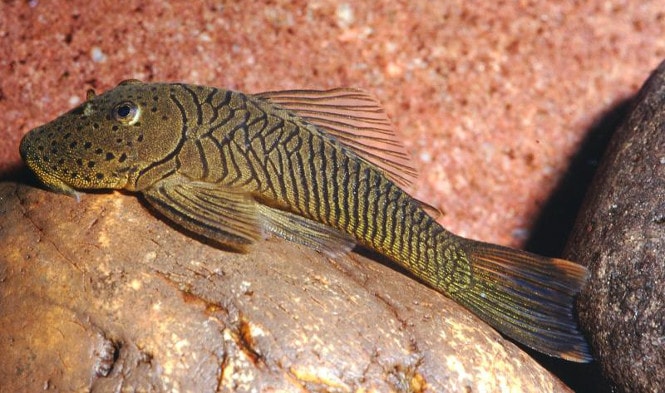 And here’s how a rubber (Chubby) pleco looks: 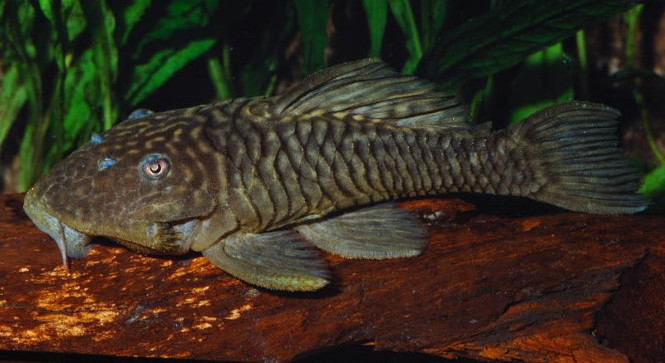 I’ve never had the luck to witness mine become gold, as it appears the fish decides when that will happen and if it will happen.

However, when it comes to differences that’s about it.

Both of these plecos have similar needs in terms of care (except, of course, tank size) hence the common confusion.

If you already bought yours or plan to get one soon you will be satisfied with either.

Don’t worry if you’ve got the Rubber pleco, this guide is for you as well.

They grow really slow. You’ll have your time to prepare a bigger tank later on.

This species of pleco remains relatively small compared to its brothers:

A Rubber Lip pleco won’t outgrow 4.2 inches (10.6 cm) in full body size. The Chubby Rubber pleco, as established, will reach about 7 inches (17.7 cm), which is still not near enough a Common pleco.

In small tanks (20 gallons) Chubby plecos should reach about 5 inches at max, before being relocated to a larger one.

Anyway, Rubber Lippled plecos are slow growers, so don’t be bothered if yours does not hit these numbers soon after its arrival.

I’ve had mine add about an inch in one and a half years.

Bear in mind that this does not mean you can stick either species in any tank with less than 20 gallons of volume.

They may not grow much, but they do require their scavenging space.

They can also get territorial among each other, other plecos, or any catfish, for that matter.

If you’d like to enjoy more than one I’d strongly suggest that you provide them with at least 55 gallons of a fish tank for starters.

If it’s a long well-planted one – even better.
Related read: Small Pleco Fish That Grow To No More Than 4.3 Inches

RL plecos eat algae almost exclusively unlike other species of pleco. Though they are classified as omnivores they would much prefer sticking to a herbivorous diet.

However, it is possible for them to lose interest in the natural growth of your aquarium.

Once they get comfortable with externally-supplied foods (meaning you feeding them) that deviate from a mainly algae-based diet they may give up on your aquarium’s algae.

This only happens in extreme cases when they were fed this way from an early age.

With practice, I learned that it is really best if I purchased mine when they were young.

When I’m about to get one I always ask the guys at the store to give them some veggie or algae wafers, just to make sure they will eat it.

Young ones are just under 2 inches.

If you’re hoping that they will keep your algae growth under control you’d need to confirm that they are still interested in that. 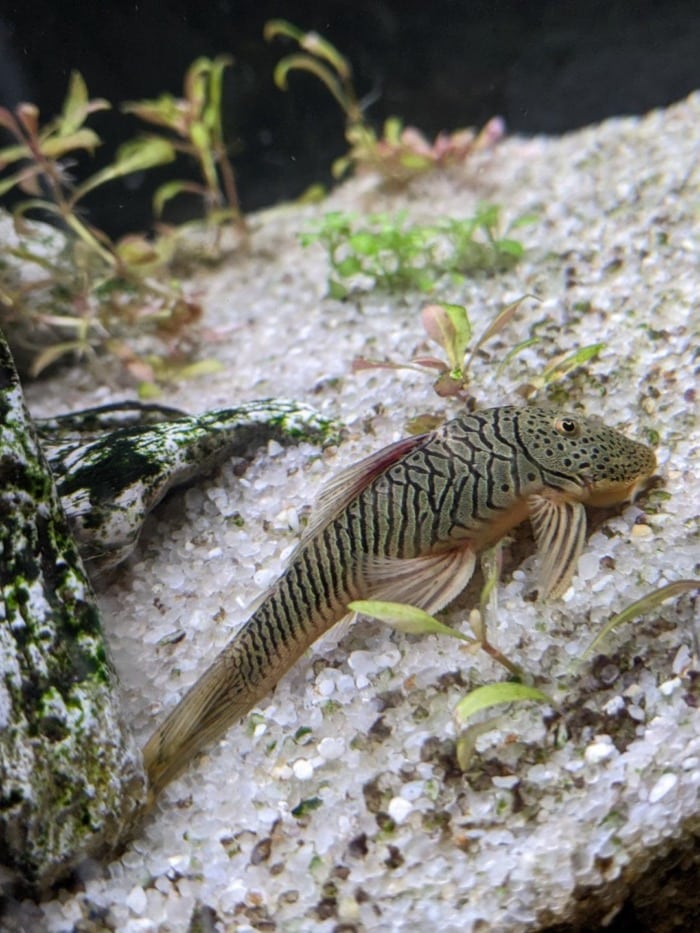 I can’t say it was a waste of money, as I really like these creatures, but rather a waste of talent.

Or so I’ve witnessed in my personal experience.

Another reason they may not be interested in cleaning up a tank is not enough CO2 for your plants.

Such conditions favor the algae allowing it to fortify its cell walls.

This makes it harder and therefore unappetizing to fish. Learn more about that in the guide I wrote on exterminating black algae for good.

By the way, Rubber Lip plecos do eat black algae, along with green, blue, and brown algae.

They can definitely be placed among the ultimate algae-destroying machines.

You can learn more about top-performing algae-eating fish (and not only) here, in my guide.

That being said you should never count on algae growth alone for your RL pleco’s diet.

A rubber lipped pleco’s diet should be almost entirely plant-based.

Here and there you can drop them some meat though, but don’t overdo it.

High-quality flake food will be alright too.

On some occasions, people report their Rubber Lips would eat carnivore pellets as well.

Just know that the digestive system of the rubber lipped pleco is designed to digest plant matter and fiber.

With good care, the Rubber lip plecos will live up to 12 years. 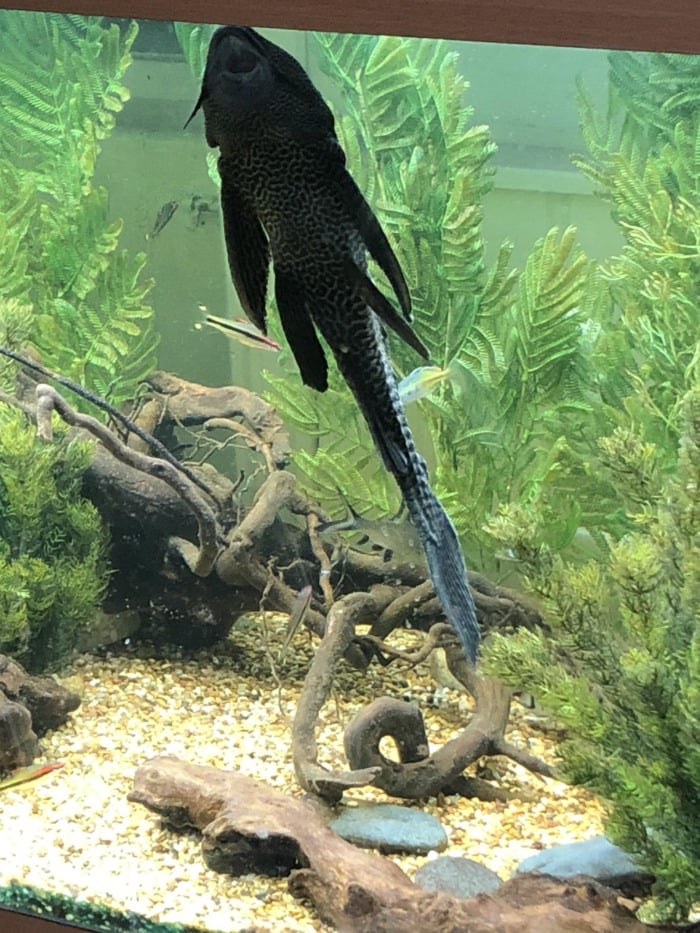 Image by: Petaaa
Stress can have an impact on their well-being as with every other fish.

Make sure you put yours in a friendly environment, avoiding aggressive aquariums.

They are very peaceful by nature.

All they would want to do is lie around or comfortably hide in an artificial cave.

They are a good addition to a community tank.

RL plecos will not really bother your other fish, unless there are other plecos, as they get a tiny bit territorial among each other.

This can be avoided by providing them with plenty of space to roam.

To see some good ideas on calm community fish that will get along with your Rubber Lips, click here.

Anyway, they also like to hide under or hanging out on smooth-surfaced round rocks that resemble the bottom of a river.

Naturally, they LOVE having some driftwood around.

If you haven’t any, I have a pretty decent guide on where to find such wood.

It’s a part of their natural habitat.

My observations are that if they could they would forever glue themselves on it.

Anyway, they will be more active if nothing is stressing them but are an overall shy fish.

Whenever I was watching my Galactic Algae Destroyer, as I named him, he would just stand still and pretend to be a statue.

As soon as I turn my back, however, he’d start moving around and switching hiding places. 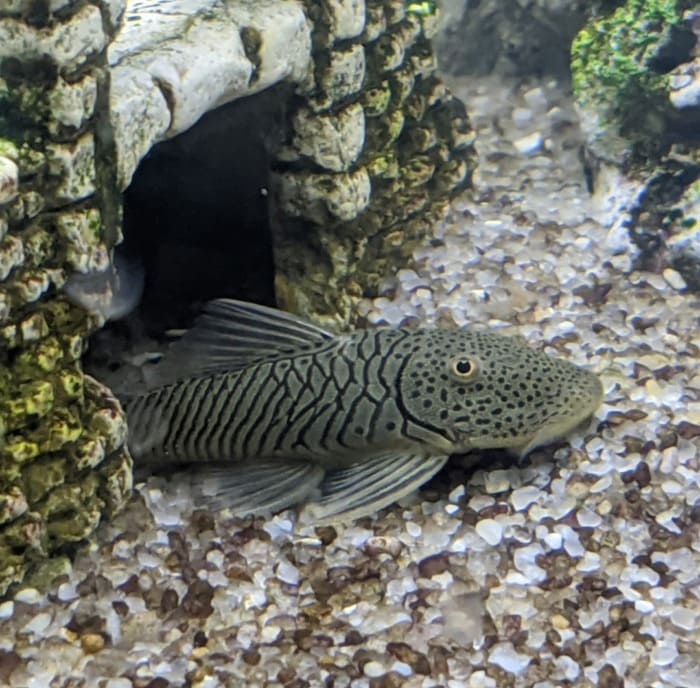 These critters are mainly nocturnal and you won’t see them doing much before the lights go off.

After actively spying on them I figured that mine would come out during the night and go about their business.

It’s after dark when they will feed on your algae.

How to take care of a Rubber Lip Pleco?

A medium to high water flow is a must as their natural habitats are the rivers in Peru, South America.

They will greatly appreciate smooth stones or wood under a current for their chill spots.

They like to have hiding places, as they are not fond of others’ attention during the daytime.

The minimum tank size for a single Rubber Lip pleco is 20 gallons (the Long tank version is better), but as this hobby goes, it’s always recommended to scale up the minimum requirements if you can.

I’d say a larger tank would make them happier. A 55-gallon tank has a bottom with dimensions of 48.25 x 12.75 inches which can be ideal for this small pleco.

Author’s note: Some online sources argue whether a Rubber Lipped pleco should be kept in 15 or 25-gallon tanks. To someone familiar with aquarium sizes, these arguments are meaningless. That’s because we need to take into account that, for the most part, this pleco species is a bottom dweller. The bottom footprint of a standard 15-gallon tank is 24.5 x 12.5 inches. The bottom of a standard 25-gallon tank covers 24.25 x 12.5 inches, the same as a standardly shaped 20-gallon Tall tank. As you can see it’s pretty much the same space, in the context of keeping a Rubber Lipped pleco.

Anyway, a fully grown 7-inch specimen of Chubby Rubber pleco should be relocated to a 75 or a 100-gallon tank.

Breeding Ruber Lips may be difficult

Very rarely breeding in captive conditions has been reported.

This is due to the lack of sufficient water current in home aquariums.

In the wild, it goes like this: The male will attach himself upside down under a flat surface right above where the eggs were laid.

He will then protect them from predators. He will keep them safe from the stream with his fins.

Where can you buy this rather rare fish?

After some feedback from my readers, I realized that not everyone was so lucky to a Rubber Lipped pleco in their local fish store. I managed to negotiate a delivery for mine with a salesman near my location.

However, if you aren’t able to find this type of pleco where you live, you could simply order it online.

One place that I’ve seen Rubber Lip plecos for sale is AquaBid, but there are also other online aquarium stores that you could try. Visit the link and check out the retailers that specialize in selling freshwater live fish to improve your odds of finding one. 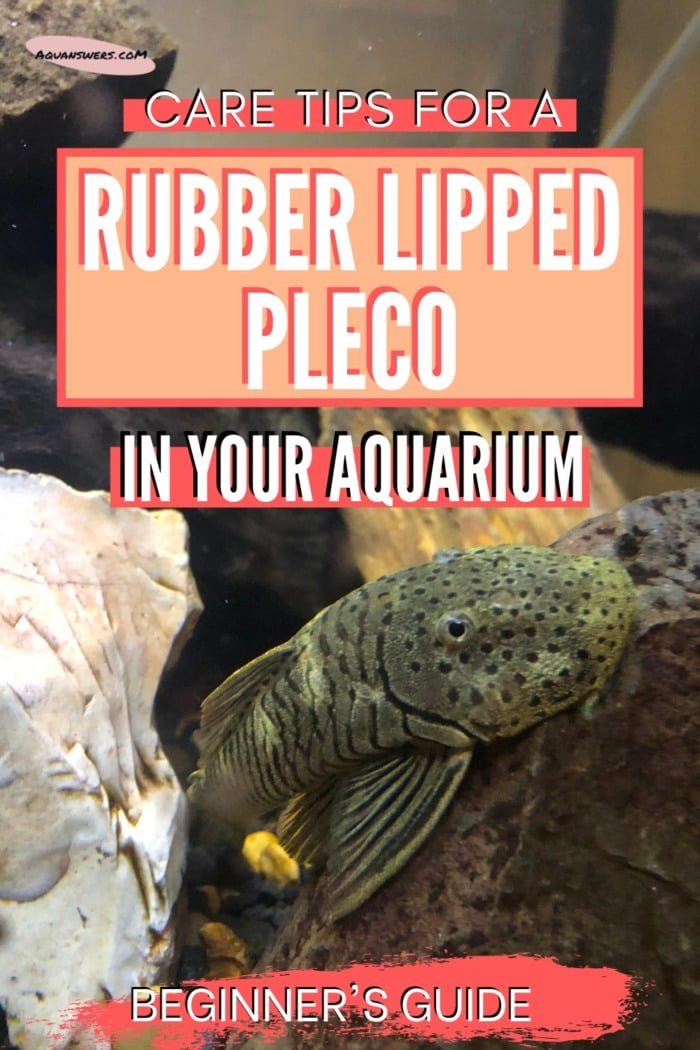