Anyone who’s ever had an interest in exotic pet care has probably dealt with a lot of confusion when it comes to one specific amphibian.

Even though distinguishing salamander species isn’t that difficult, a lot of keepers have difficulties in telling if a water dog is any different than an axolotl.

How do mudpuppies fit into the mix?

Why are water dogs even called that?

Let’s answer these questions once and for all and clear up the confusion.

Is a water dog different from an axolotl?

There’s a lot of confusion when it comes to the appearance of these creatures, and many mistakenly believe they are one and the same.

Regardless of their physical similarities, however, there are some key differences that set these salamanders apart.

Here’s what makes a water dog different than an axolotl:

Although they do share some similarities, axolotls and water dogs don’t belong to the same species. The term water dog is used to refer to the larval form of salamanders from the Necturus genus. The axolotl, however, is a salamander species belonging to the Ambystoma genus. 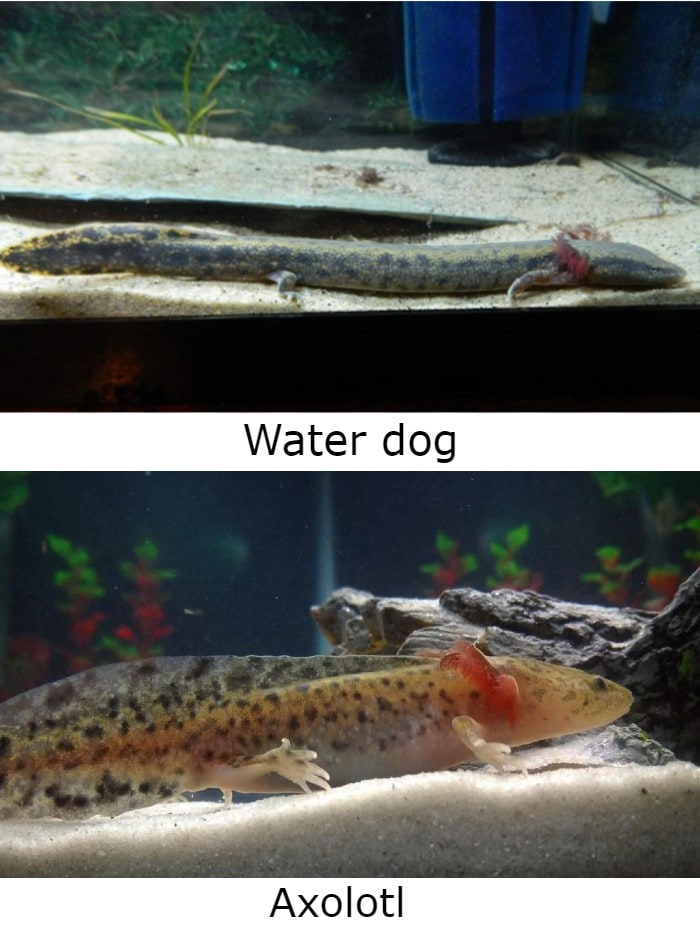 It’s also worth noting that the names of these salamanders have also contributed to the widespread misconception that they’re both the same.

The name axolotl can be roughly translated into “water dog” where the “a” stands for “atl” or water while “xolotl” refers to the Aztec dog-headed deity of fire and lightning.

However, this has nothing to do with the naming of the water dog salamanders.

Water dogs own their name to the common disbelief that they can bark.

Let’s move on and take a closer look at the differences between these creatures.

Water dogs are found in lakes, rivers, and swamps of eastern Northern America, as well as Canada. They prefer clear waters with a temperature range of 60-75F and hide in vegetation or under stones and debris during the daytime. 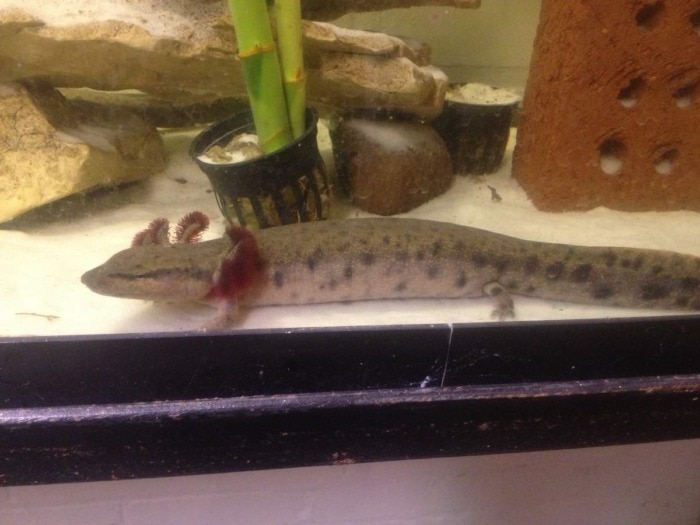 At night, they emerge to feed on whatever prey they can catch which is typically fish, worms, and snails.

Author’s note: Water dogs are considered bioindicators because their health status in the environment can tell the effects certain pollutants have on an ecosystem.

Unlike the wide distribution of water dogs, axolotls are critically endangered and can only be found within lake Xochimilco in Mexico City. 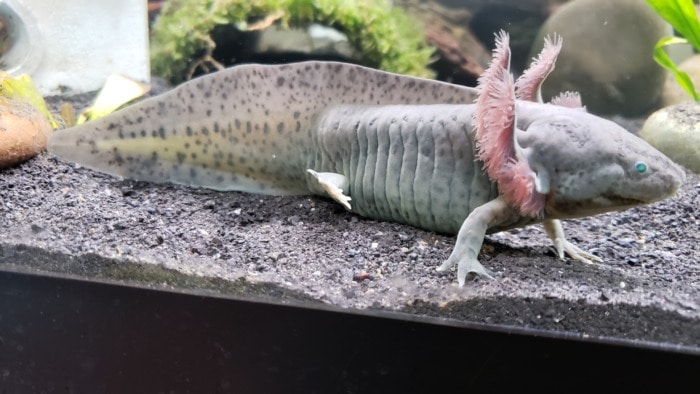 Back in 2020 they nearly became extinct as a result of the urbanization of Mexico City and the introduction of invasive species such as tilapia and perch.

Fortunately, the combined efforts of biologists, researchers, and environmentalists managed to prevent this.

The diet of axolotls is nearly identical to that of water dogs, with one key difference – cannibalism.

Due to the sheer lack of food in their environment, axolotls sometimes resort to acts of cannibalism. Some researchers even speculate that this has led to the development of their regenerative ability.

Author’s note: Axolotls have the ability to grow back limbs regardless of the place of injury. The regeneration starts after the formation of an epidermal layer around the wound. The cells in the epidermal layer start to multiply rapidly eventually leading to the complete regeneration of the lost limb.

Both water dogs and axolotls spend their entire life cycle underwater, unlike other salamander species who leave their aquatic environment once they have completed their metamorphosis. Accordingly, mature specimens retain the physical features which help salamander larvae adapt to life underwater.

However, there are a few anatomical differences between water dogs and axolotls.

For one, water dogs have thumb pads on their feet, which help them move upstream by providing a stronger grip with the underwater surface. 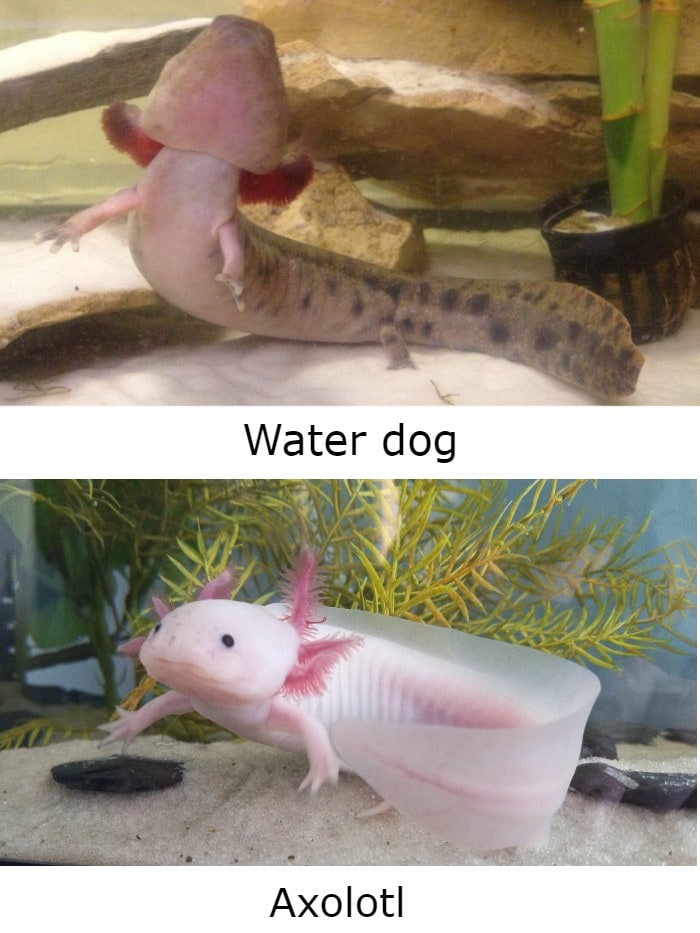 Due to the difference in their habitat, axolotls haven’t developed these nuptial pads and their feet are rather slender and underdeveloped as a result.

Author’s note: Finding a photo to show the difference between the feet of the two species in detail turned out a little too hard.

Anyway, another point of difference between these salamanders is the shape of their tails.

Water dogs have a flattened tail that’s slightly rounded, whereas that of an axolotl is enveloped in a dorsal crest and tapered off at the end.

In albino axolotls, the actual tail can be clearly seen, because of their translucent dorsal crest.

Size-wise, water dogs grow between 8″ to 16″, depending on the environment and the particular species. 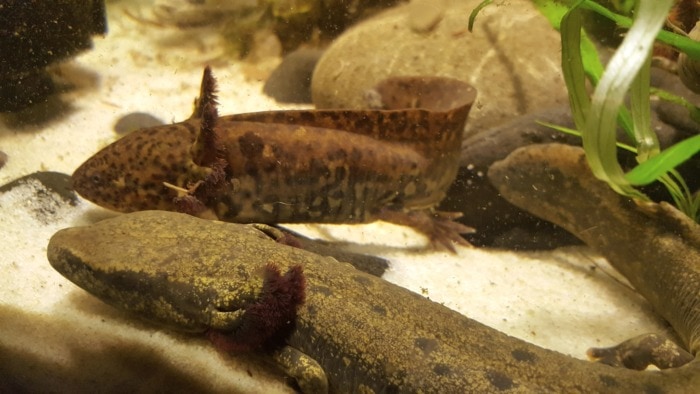 The size of an axolotl also varies, but in most cases, a mature specimen reaches 9″ in size.

However, you’re unlikely to stumble upon a wild axolotl due to its conservation status.

Chances are you have probably seen one of the selectively bred specimens which come in leucistic, golden albino, xanthic or albino colors. Even though they seem appealing, such breeds wouldn’t be able to survive out in the wild, because their color would make them an easy target for predators.

As you can see, water dogs are different from axolotls in more ways than one.

Hopefully, this article answered all of your questions and cleared the confusion surrounding these salamanders.