Walking by your tank and seeing it suddenly become murky can be disheartening.

If you have noticed your fish tank keeps getting cloudy after a water change, then you’re not alone.

Cloudy water is actually one of the first issues many beginners face.

This often leads them into a frenzied hunt for answers that results in rash decisions which only make things worse.

Even though your mind may be wrought with disastrous thoughts, you shouldn’t lose hope and panic. The cloudiness in this case, is typically the result of a bacterial bloom provoked by the easily accessible nutrients in your tap water.

The sudden change in your aquarium water is completely natural and you can deal with it in several ways.

It’s something I’ve faced multiple times in the past, and I’ll share why it happens and how you can get rid of it in this post.

Why is your fish tank cloudy after a water change?

Regular water changes are an essential part of the maintenance of our aquariums. They remove the nitrate buildup and help us maintain the pH levels of the water stable.

This keeps our fish healthy and sound, while we reap the benefits of their lively company.

Unfortunately, sometimes things take a turn for the worse. 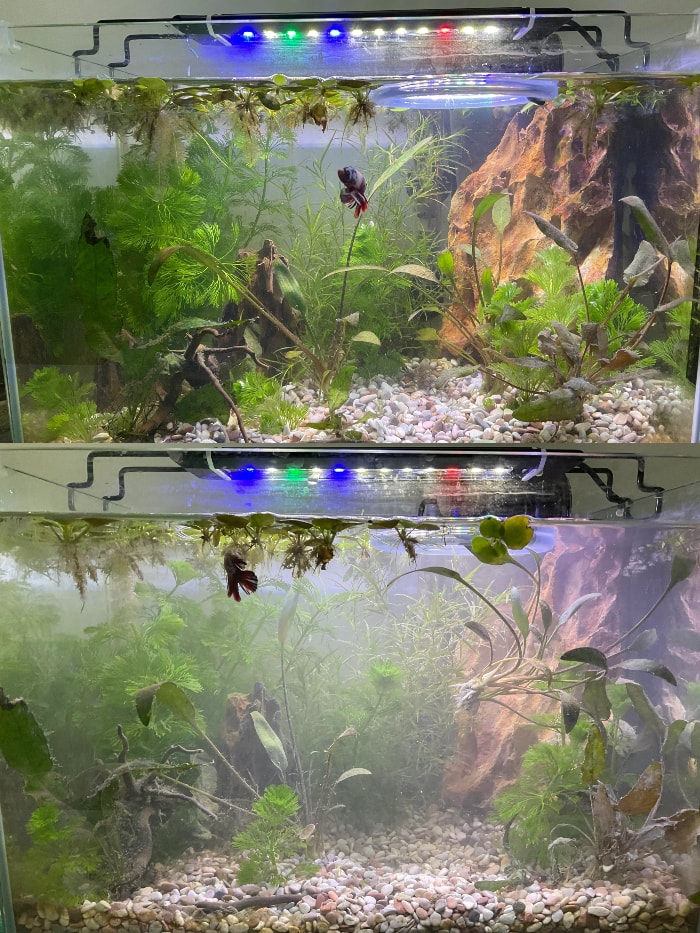 An aquarium before and after water change by Misspoptouto

This is when we resort to the internet in hopes of an answer that will put a stop to the pestering questions that can’t stop bothering us.

Here’s why your aquarium water has become cloudy after your last water change:

Heterotrophic bacteria are one of the most common types of bacteria in household aquariums. When there’s a partial water change, they feed on the organic compounds from the new water and start to multiply rapidly. This leads to a bacterial bloom which clouds the aquarium.

As a result, they have no time to colonize the different parts of the aquarium and saturate the water column instead.

That’s why the change in water quality typically becomes noticeable after 1 or 2 days.

In marine aquariums, the water often becomes foggy due to a lack of magnesium after a water change.

This leads to the formation of small white particles that eventually shroud the entire tank.

Depending on the underlying reason, murky aquarium water might prove to be more than just an eyesore.

Will cloudy water hurt your fish? 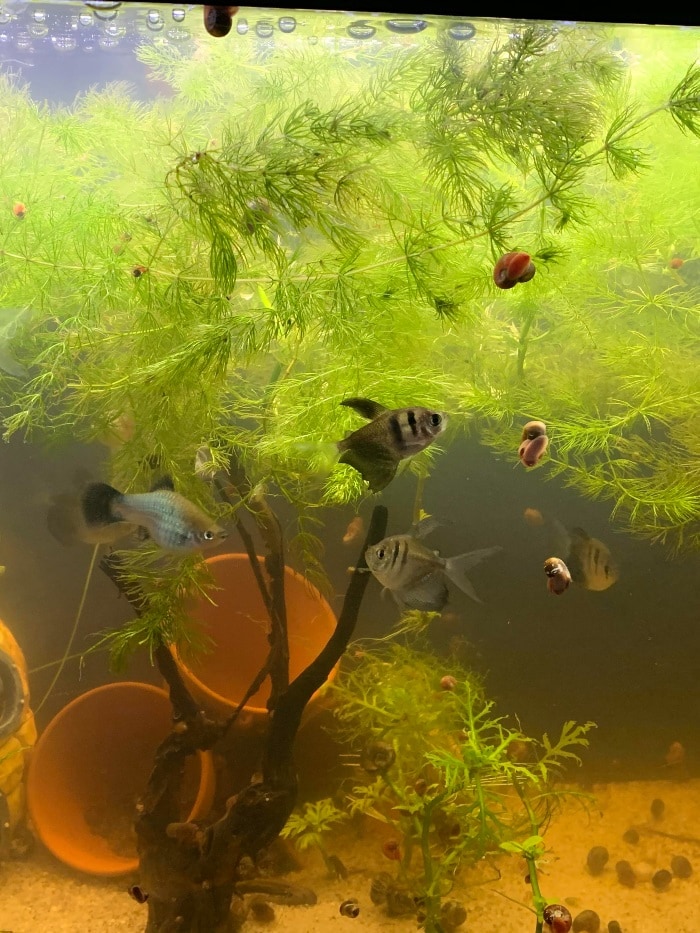 To help you understand how cloudy water can affect the health of your fish, I will take a step back.

Remember the second type of bacteria I used to exemplify how fast heterotrophs replicate?

Well, autotrophic bacteria are something you’re actually already familiar with.

These are the same types of bacteria that are responsible for the nitrogen cycle in your tank. While heterotrophic bacteria break down organic matter and use it as a form of energy, the beneficial autothrophs feed on the non-organic compounds that are left.

Consequently, when there’s a bacterial bloom in your aquarium, there’s a high chance the amount of ammonia and nitrates will also increase. Moreover, the bacterial activity in such a scenario will also steadily decrease the pH of your water.

Both of these conditions have detrimental effects on fish health and might end up destroying your entire tank if the bacterial bloom goes unaddressed.

What’s more, during a bacterial bloom the amount of available oxygen for your fish decreases as heterotrophic bacteria use it to fuel their growth.

However, such extreme cases are rarely a result of a simple water change.

How to get rid of the cloudy water after a water change? 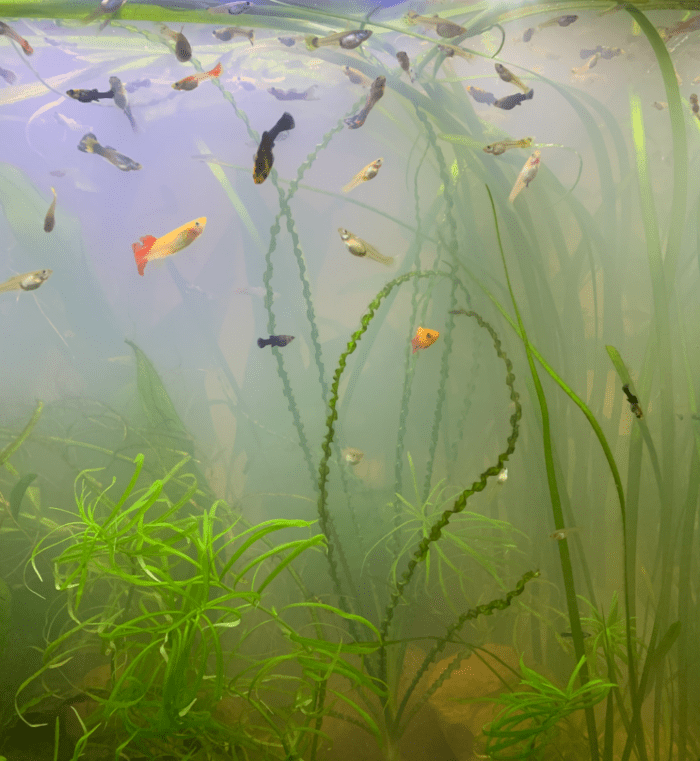 Before you apply any of the methods I’ve listed below, try to rule out if your problem wasn’t caused by something else. Cloudy water can be brought on by a variety of reasons other than a partial water change.

Many aquarium owners tend to feed their fish more than is needed.

This turns the leftover food into a bed for bacteria and a host of other unpleasant side effects.

Others neglect to trim the vegetation in their tanks which unsurprisingly leads to the same end results.

In some cases, the fault lies in the equipment and not the owner. Some water filters in freshwater aquariums might not be set up correctly and produce too much agitation which clouds the water.

Related: Why is your fish tank filter not working?

Faulty protein skimmers in marine setups could also make the water appear hazy by leaking microbubbles back into the aquarium.

Your aquarium water might also appear foggy because the Nitrogen cycle hasn’t been established yet.

During its initial phases, there are bacterial imbalances that make the water appear hazy.

This makes cloudy water a fairly common occurrence in new fish tanks. In these cases, the best course of action is to simply let nature run its course. It will probably take a few weeks for the water to clear.

Lastly, your aquarium might look cloudy as a result of a recent substrate change. If you put an inert substrate such as sand straight in your fish tank, without washing it first, then it can release fine particles that might pollute it.

In case the water is still dirty after 1 or 2 days, then the problem probably lies elsewhere.

If you’ve eliminated the above as possible culprits, then the following solutions will fix your problem: 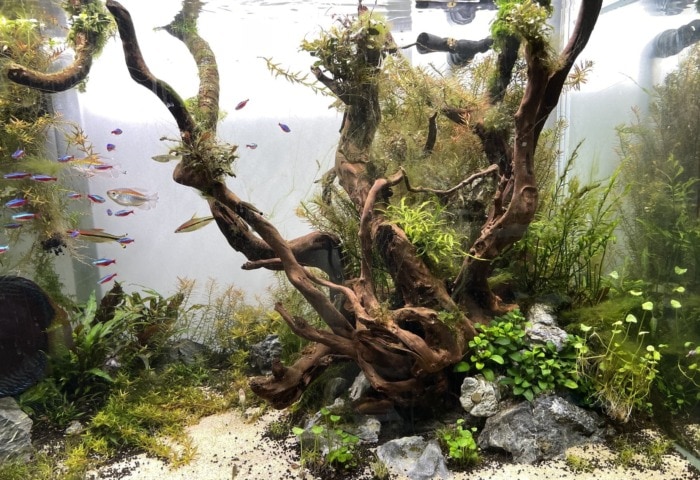 When we envision the aquarium of our dreams, we picture it full of gorgeous, colorful fish which swim about undisturbed.

The last thing on our minds is how changing water can turn our dreams into ruin.

However, by taking a few simple steps, we can avoid cloudy aquarium water once and for all.

I hope this article has cleared both your confusion and your fish tank.

And as always, don’t forget to leave your thoughts down in the comments.